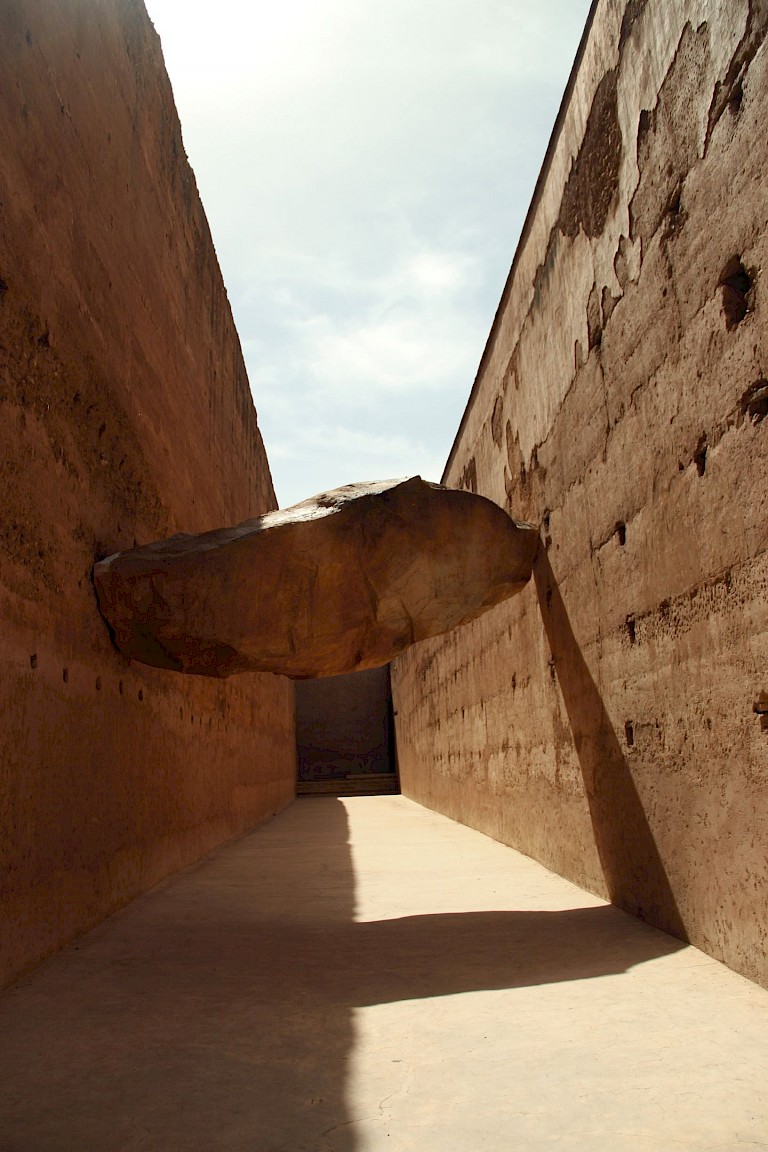 The visual artist presents an unusual installation at the Palais El Badii: a huge rock, polystyrene and plaster, seems wedged between two walls at the end of a narrow corridor. Hovering over the heads, the carved stone is reminiscent of ancient history and distant geological times. And at the same time, our attention is projected forward, towards a potential, sudden and terribly close exit. The pieces that constitue Zemmouri’s “l’Œuvre au noir“ are delicately brutal compositions, violently beautiful, where accumulations of small elements and silences, gravity and weightlessness, reveal equilibrium but also doubt. Selected by the curator, Reem Fadda, also associate curator at the Guggenheim Foundation in New York, in charge of the Art section of the Middle East, as part of the official program of the 6th edition of the Marrakech Biennale, Fatiha Zemmouri, a Moroccan artist renowned for her work around raw materials, unveils a colossal and poetic work entitled "In the shelter ... of nothing". Like a rock in almost zero weight blocked between the walls of the high walls of the historic Palais el Badi in Marrakech, this work provokes conflicting feelings between weight and lightness, power and fragility, balance and instability, confinement and elevation.

In the intents of the artist, ‘Sheltered ... from nothing’ reflects the fact that the current world leaves behind a feeling of discomfort. The "threat" seems to be the leitmotif of the media that only transcribe violence and insecurity. What is this feeling of fear and how far is it justified?

With this rock in unstable equilibrium between two walls, Zemmouri tries to recreate this "zone of discomfort" facing a danger, real or fantasized. Unusual by its unexpected presence, poetic by its aerial aspect, threatening by its instability, it is ambivalent feelings that I wish to awaken. This stone floating above the visitors, ambiguous, because it represents both a shelter and an imminent danger, refers in filigree to the black stone as a symbol of beliefs, the link we weave with the spiritual and the religious. The uneven rock also evokes the contrast between the solidity, the eternity of the stone and the fragility of human existence. There is also a reference to all the symbolism of the rough stone. A raw stone that contains in itself all the mysteries of creation, which has nothing to do with form, which simply gives us a view of what the raw material is, the materia prima, with content in it, the seeds of its potentialities. It is from this raw material that the "temples" are built. Once wide, it can take its place in the building. To carve it beyond the model that does not correspond to us, or does not correspond to us anymore. The artist invites everyone to carve and refine their own identity.

F. Zemmouri thus reveals through her monumental rock, a form of balance and doubt. A rock, which by its unstable equilibrium constitutes both a shelter and an imminent danger, in a threatening world where violence and insecurity reign. Unusual by its location and imposing size, poetic by its hanging and threatening appearance by its unstable character, the carved stone of F. Zemmouri awakens in us ambivalent feelings, buried and torn between strength and fragility. By sculpting raw materials such as wood, charcoal, calcined, polystyrene, ceramics, porcelain or resin, the artist metamorphoses them under fire, questioning their plastic and symbolic power. Using materials that absorb light and reveal it at the same time, Zemmouri seeks to better understand natural processes by examining the transformation of matter. Using techniques such as burning and curing, the artist experiments with a variety of materials to create meditative, poetic works that combine power and delicacy, and evoke notions such as gravity, physical existence and alchemy.

The stone weighs 250 kg and measures 7.40 m / 2.5 m wide by 1.70 m high and it took a month and a half to complete it. The size was calculated in relation to the space between the two walls which is about 5 meters, and as the stone is slightly bent, it was calculated its exact size in relation to the slope. “It was a big challenge, because at the beginning, the idea was there, it seemed like everything was possible but as the work progressed, I realized the difficulty that marked the course and in the manufacture of the stone and in the installation.” says the artist. 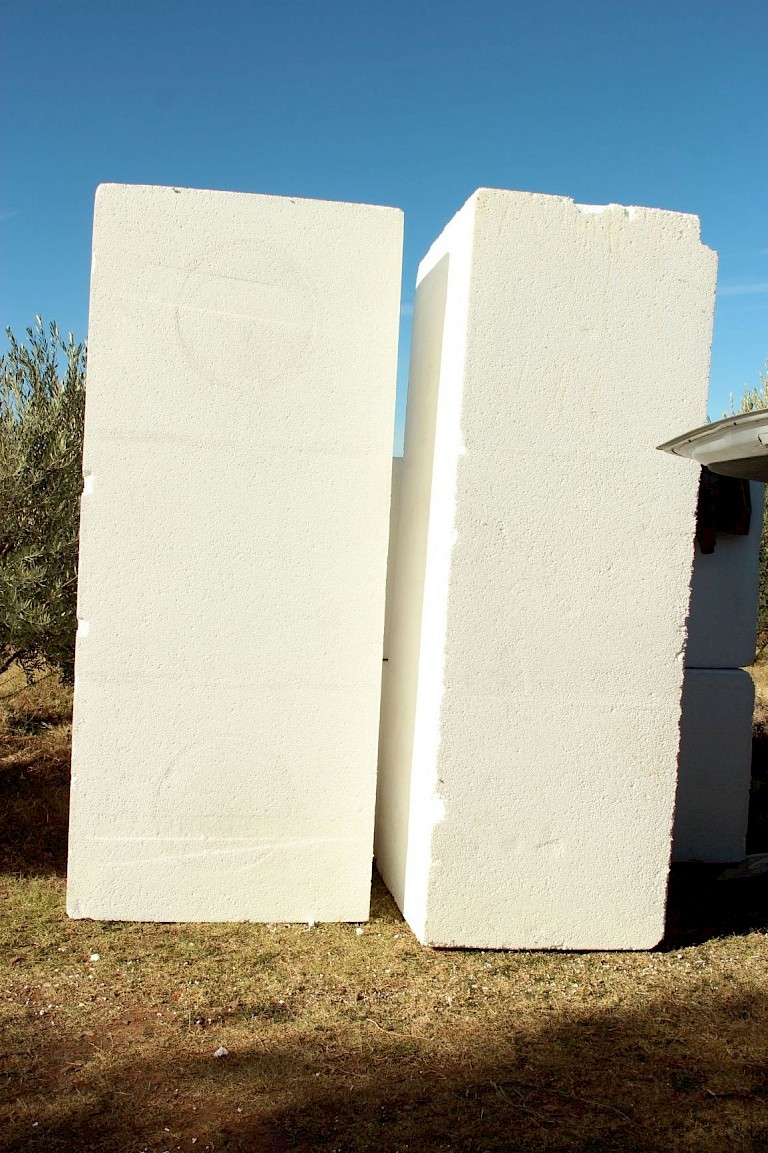 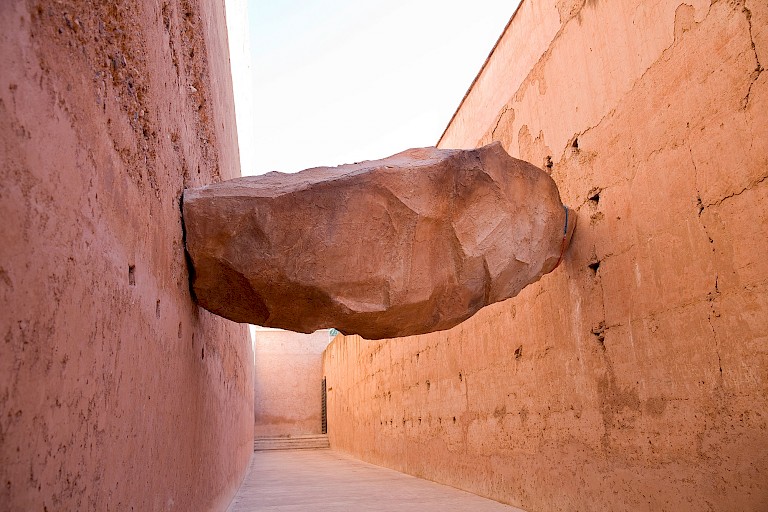