In line with Irwan Ahmett and Tita Salina's interventionalist approach to generate public dialogue and discussion, for the 2015 Asian Art Biennal, Artist Making Movement, the artists staged the public forum Agree/Disagree/Unsure. Framed around the adverse conditions faced by migrant workers in Taiwan, the discussion also critically addressed other philosophical, moral and emotional aspects to humanity, conscience and justice. In attendance at the dialogue were migrant workers, policymakers, students, curators, artists and social activists who over two hours openly expressed their views. Audience members were each given a placard to show if they agreed or disagreed with statements that were being made. Ultimately, the project aims to examine and shed light on the sense of physical and mental imprisonment that both legal and illegal migrants experience while working in a foreign land. By launching a space of public discourse for a group of society that is often rendered invisible, Agree/Disagree/Unsure discussed a complex issue in global society today.

During the discussion session, Irwan—on behalf of the duo—would provide an anecdote and pose a question to be addressed by invited presenters. The session commenced with a then-recent incident of a boy who tripped in a museum in Taipei and punched a hole through a 17th century painting that aroused international sensation, garnering swift and immediate attention from the respective individuals and institutions involved. For the artists, such a scenario stood in contrast to the fact that in 2013, Indonesian fisherman in Taiwan received inhumane treatment daily, with some even beaten to death. The obliquely connected incidents hinted at the complex and unsettling reality of how value is assigned and pointed to the fact that material goods are deemed more important than human lives. Backgrounded on the anecdote, the artists question, "What is the function of art in the contemporary world today? Why is so much care given to the painting that is accidentally hit, and no one bothers about the deliberate beating [of] fishermen so that the tragedy of murder happened?” Audience members were each given a placard to show if they agreed or disagreed with statements made. During the discussion, “invisible walls” metaphorically demonstrate the position and right of migrant workers. And at the end of the forum, Irwan revealed a transparent display box and declared his desire to symbolically break the invisible wall.

Approaching the complicated issue from a variety of perspectives, ultimately, the project aims to examine and shed light on the sense of physical and mental imprisonment that both legal and illegal migrants experience while working in a foreign land. Often, migrant workers are drifting in a weak national legal system, left unprotected and involved in temporary, informal or unprotected work characterized by low wages and lack of stability. A group that is often stigmatized, on the other hand, they are a vital resource in Asia's fast-developing economy that has witnessed an increased demand for buildings and infrastructure. These are people that have become international drifters in a new Asia that has emerged due to globalisation. By launching a space of public discourse for a group of society that is often renderedinvisible, Agree/Disagree/Unsure discussed a complex issue in global society today. 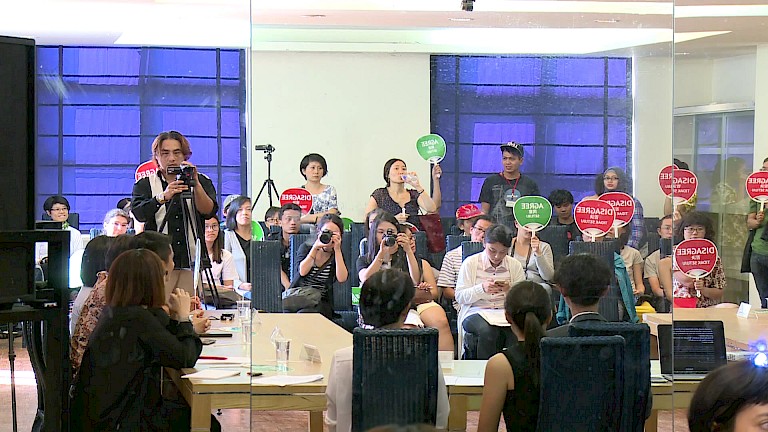 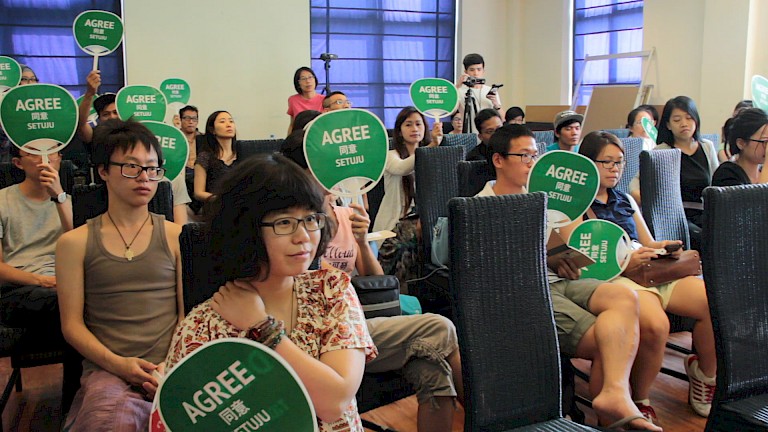 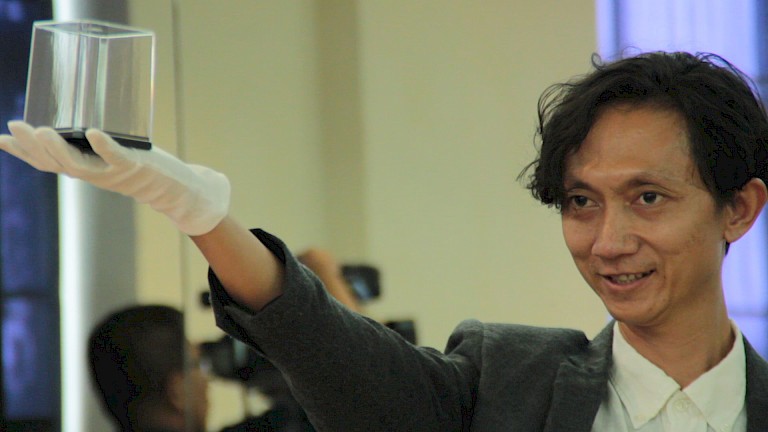 Working together since 2010, Irwan Ahmett and Tita Salina are an artist duo from Jakarta, Indonesia. They employ a tactical interventionist approach in their practice conceived in response to human interactions, the environment, as well as social, economic and political matters in Jakarta. Their works often unfold through long-term research projects that materialise in a variety of forms including films and performances. As people and communities are at the heart of their practice they also frequently employ workshops and spontaneous interventions in public spaces created around the idea of 'play' to generate critical alternatives to complicated issues and explore the complexity of human existence. Together, their works have been exhibited atEscape Routes, Bangkok Art Biennale, Thailand (2020); The Flame of the Pacific, ST PAUL St Gallery, Auckland, New Zealand (2016); Hacking Conflict, Biennale Jogja, Yogyakarta, Indonesia (2015); and If The World Changed, Singapore Biennale (2013). Mobility and travel are also important tenets of their practice. By participating in numerous international artist residencies in Japan, New Zealand, Indonesia, Poland and the Netherlands, their explorations have resulted in works that explore various geopolitical contexts both historically and in contemporary society.

Agree/Disagree/Unsurewas created and presented as part of Artist Making Movement, Asian Art Biennial 2015, organised by the National Taiwan Museum of Fine Arts. Premised around recent social and political shifts in Asia, the exhibition delved into the methods contemporary artists have similarly adopted active and dynamic stances in their works and practices, positioning themselves as active mediators, which are methodologies that resonates with the duo’s practice. By operating beyond the domain of contemporary art to include perspectives from politics, economy, mass media, urban space, architecture, ecology, numerous works in the biennal, including Agree/Disagree/Unsure, offered multifaceted responses to urgent issues.

The artists' impetus to stage Agree/Disagree/Unsure was seeded during one of their numerous visits to Taipei Main Station on the weekend. There, they noticed the existence of an "invisible wall" that demarcated the public space and inadvertently shaped the ways the space was being utilised by Indonesian migrant workers on their day off. Speaking with the migrant workers gathered at the Taipei Main Station, the artists also learnt first-hand about the difficult circumstances facing

Southeast Asian migrant workers in Taiwan. During other research trips to Taoyuan, Taichung, Tainan, Kaohsiung and Pingtung, amongst numerous places, the artists observed that this "invisible wall" could be likened to a collision zone between the local community and migrant workers, where exclusion is enforced through forms of governance as well as implied through gestures, reinforcing ingrained attitudes of stigma and discrimination towards this itinerant community.

As it was developed as part of the biennial, Agree/Disagree/Unsure received support from the institutional organisers. Documentation from the forum which took place on 13 September 2015 was also displayed in the exhibition alongside the collective’s other work Salting the Sea. Also created for the biennial, the Salting the Sea features documentary footage taken by the artist. Through the collection of tears, which capture the deepest of human expression and emotion, the work poetically examines the living conditions, working environments and legal rights of migrant workers in Taiwan.

In 1991, American artist, writer and educator Suzanne Lacy defined a type of American public art that was not a sculpture situated in a park or square. In her titular book, Mapping the Terrain: New Genre Public Art, Lacy defined new genre public art as being activist, often created outside the institutional structure, which brought the artist into direct engagement with the audience, while addressing social and political issues. Similarly, in the practice of Irwan Ahmett and Tita Salina, the artists employ a tactical and interventionalist approach to dealing with social and political issues in public space by devising encounters to generate critical discussion to complicated issues through playfulness and humour.

Agree/Disagree/Unsure is a work by the artists that examines the issues faced by migrant workers in Taiwan to a public level to shed light on a vulnerable community that is often invisible. As the Indonesian migrant community in Taiwan continues to grow, their inclusion in public conversations is necessary. According to the National Immigration Agency, Taiwan housed more than 700,000 migrant workers in 2018, with Indonesian migrant workers being the most common
(268,576). Agree/Disagree/Unsure and Salting the
Sea by Ahmett and Salina are part of a growing number of works such as joining films such as Pinoy Sunday by Malaysian director Wi Ding Ho (2009) and Tseng Ying- ting’s Ye-Zai (2012) with migrant workers as main protagonists.

Convened as a public forum, Agree/Disagree/Unsure is a form of ‘real like performance’ by the artists
that discussed migrant workers issues from a variety of perspectives from various individuals in English, Chinese and Bahasa Indonesian. Using anecdotes and real-life examples, the artists brought a complexity of social, cultural, economic, human rights and legal matters to the forefront to explore emotions, aspirations and the human condition. In addition to the invited speakers, in attendance, as audience members were an estimated more than 30 individuals who were given placards and could "agree" or "disagree" with the statements being

made and comprised mainly of curators, activists, media reporters as well as Indonesian workers and students. The democratic design of the dialogue ensured that all audience members were involved in the process.

Ahmett and Salina's engagement with issues of migrant worker both in Taiwan as well as the rest of the world is long-standing. On 28 September 2016, the artist
staged Setuju/Tidak/Ragu—meaning Agree/Disagree/Unsure— in Jakarta, Indonesia.

The public discussion was similar in format to the public forum in Taiwan organised a year earlier. In attendance were media, academics, policymakers, cultural observers, government, activists, migrant worker groups. During the event, representatives from the Ministry of Manpower in Indonesia confirmed that they would assist and protect Indonesian migrant workers in Taiwan and those in other countries who face legal problems. At the end of the discussion, a joint petition was signed by representatives from several organisations including IPIT (Indonesian-Taiwan Workers Association) and the Indonesian Migrant Workers Association (ATKI). The nine demands exacted for Indonesian migrant workers to enjoy benefits such as holidays, more transparency and standardisation in contracts and protection from workers’ rights.