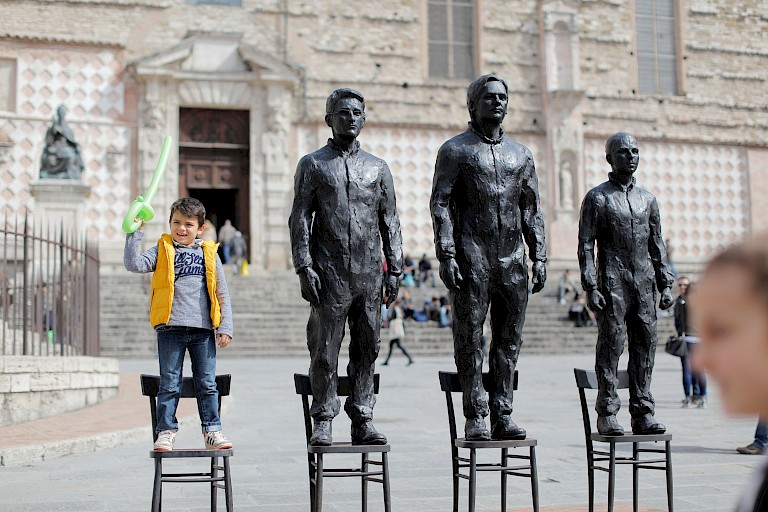 'Anything to Say?' A Monument to Courage

Julian Assange, born in 1971, publisher and journalist, is best known as the editor-in-chief of the whistleblower website WikiLeaks which he cofounded in 2006. WikiLeaks achieved particular prominence in 2010 when it published US military and diplomatic documents leaked by Chelsea Manning. Chelsea Manning, born in 1987, is a US soldier assigned in 2009 to an army unit in Iraq as an intelligence analyst. Manning had access to classified database which he leaked in 2010 to WikiLeaks. Edward Snowden, born in 1983, is an American computer professional. He worked for the CIA (Central Intelligence Agency), the DIA (Defense Intelligence Agency) and the private intelligence contractor Dell, inside a National Security Agency outpost in Japan. In 2013, he released numerous NSA documents to the press. Chelsea Manning is serving thirty-five years in an American federal prison. Julian Assange has been confined in England for four years without a single charge brought against him. Edward Snowden is trapped in Moscow. The Italian artist Davide Dormino deduced to honor their courage by erecting an itinerant monument to raise awaken about the sensitize the community about cyber-anarchism, and to encourage to think about privacy and freedom in the era of the internet.

“Anything to say” is an art project born by the meeting between the Italian artist Davide Domino and the journalist Charles Glass in 2013. The project consists in a life size bronze sculpture group, representing the figures of Julian Assange, Chelsea Manning and Edward Snowden standing on three chairs; with their arm along their body, and an eye forward, they are looking to an imaginative public; next to them there is an empty chair, as an open invitation to the public to stand on it. Davide Dormino himself believes in the power of Public Art. « It has the power to make people grow and change their point of view. The chair has a double meaning. It can be comfortable, but it can also be a pedestal to rise higher, to get a better view, to learn more. They all chose to get up on the chairs of courage. They made their move in spite of becoming visible, thus threatened and judged. Some think they are traitors. History never had a positive opinion of contemporary revolutionaries. You need courage to act, to stand up on that empty chair because it hurts.»

Anything to Say? Was inaugurated on the 1st May 2015 in Alexander Platz, city of Berlin in front of the international press. Since then it has been on world tour, in Germany, Italy, France, Serbia, Switzerland and Slovenia, taking part to different events such as: forum of World Democracy in Strasburg, Festival of Journalism in Tours, the 30th session of the Human Rights Council in Geneva, Festival of Journalism in Perugia, Arts Stay Ptuy, Art Festival Dev9 of Belgrado, Centre George Pompidou in Paris,, University of Roma “La Sapienza”. During his tours it has received the moral support of important personalties such as Noam Chomsky, Roberto Saviano, Daniel Ellsberg, Henry Porter, Courage Foundation, Reporters sans Frontières.

Many people on social media have supported the action from the beginning of the crowdfunding campaign, after the realization many people took part to the events and stood up the empty chair to speak up about social justice in public, a virtual public shared the pictures of actions on social media during the project world tour.

Most statues in public spaces commemorate warriors. However the purpose of the artist here, is to subvert the meaning of war memorials. “Anything to Say” pays homage to three whistleblowers, there ordinary man who said no to war, to the lies that lead to war and to the intrusion into private life that helps to perpetuate war. Manning, Assange and Snowden accepted their loss of freedom.

The value of the message consists on its the simplicity of its meaning, nevertheless undoubtedly powerful. Asking for an active participation of the spectator, the artwork is complete and makes sense just when someone takes the courage to stand on the chair to speak; challenging the community to think of courage, freedom of speech and its consequences. An example of democratic action, that pursues its goals in total autonomy form the very beginning, that crosses the territory of politics. 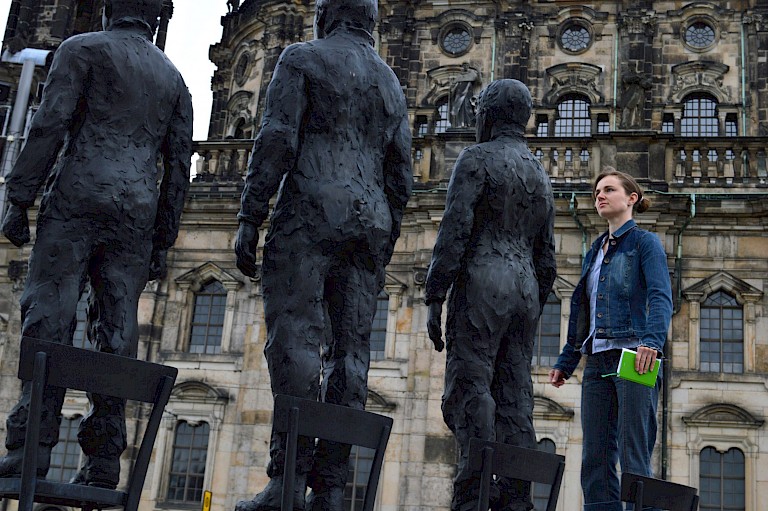 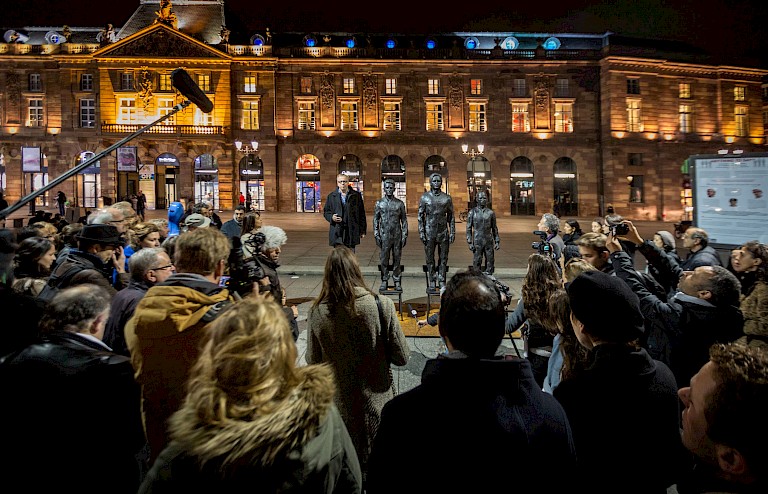 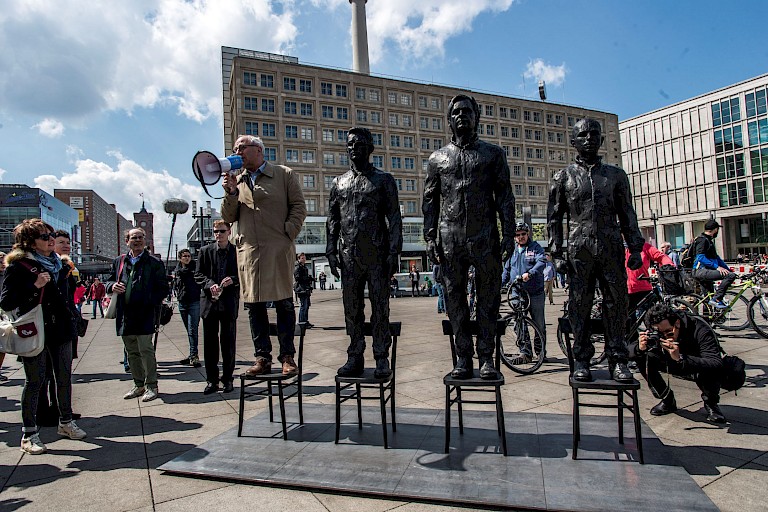