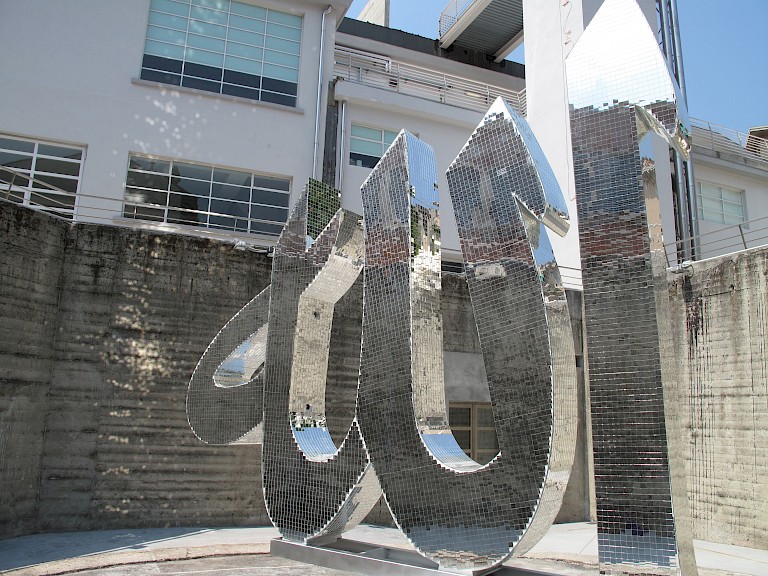 A’Salaam Alaykum: Peace Be Upon You

A'Salaam Alaykum: Peace Be Upon You was a public installation by Lebanese artist Zena el Khalil, commissioned in 2009 for the Fondazione Merz in Turin, Italy. The work consisted of a rotating 3.8-meter-tall “Allah” sign in Arabic script, executed in mirrored glass tiles. The sign reflected spotlights installed on the periphery of the basin, and was accompanied by a DJ set by Ayla Hibri as well as by projections of images of everyday life. The atmosphere created was one reminiscent of a Lebanese nightclub, while the mirrored sign visually recalled works of pioneering Iranian artist Monir Shahroudy Farmanfarmaian. A'Salaam Alaykum was sited in the “basin” area just outside the Foundation building, a space that used to accommodate tanks for the former heating plant, and was the third of four installations curated by Maria Centonze.

El Khalil’s work can be located in the trajectory of relational art, insofar as it staged a social situation within which audiences could immerse themselves. It might also be considered a form of “experience design.” After all, the artist made sure to include enough familiar cues in different registers, the DJ music, flashing lights, mirrored reflections, and so on, to render the installation easily accessible (rather than conceptually opaque) and oriented towards “uplifting” experiences. Audiences were welcome to dance as though the space was a disco. 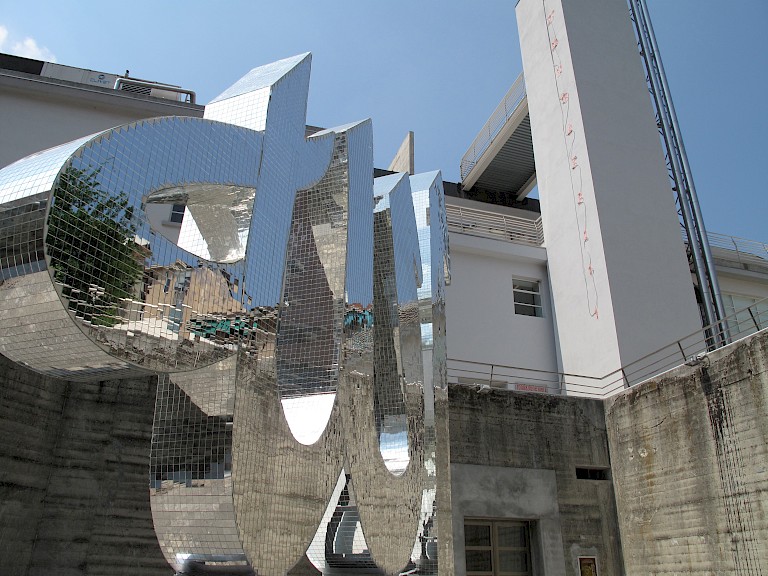 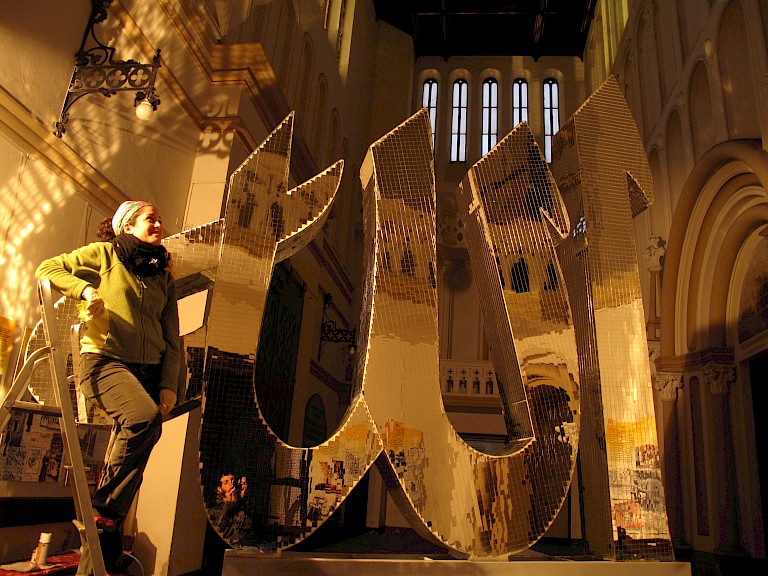 The artist has publicly stated her belief that dancing can be therapeutic: “Dancing, it seems, has become a form of healing. Dancing, it seems, helps us to forget why we turned against each other. As our bodies move together in small dark spaces, we begin to realize that flesh is flesh and we are all the same. As euphoria takes over, we try to forget why we used religion to kill. Why we found each other so different.” It appears that by inviting audiences to dance, A'SalaamAlaykum was intended as an artistic contribution to conflict resolution.

The significance of this project is best evaluated by attention to its impact on a certain sector of Turin society. As an industrial (automotive) manufacturing hub, the city has traditionally attracted migrant laborers, many from Morocco. These audiences responded the most enthusiastically to the installation, with many children spontaneously joining the dance. The children also worked with the artist to teach native Italian audiences Arabic dance moves, and according to the artist, it was the first time that the Moroccan immigrants from the neighborhood had ever visited a Fondazione Merz event.

A'Salaam Alaykum formed a bridge between different resident cultures, bringing diverse individuals and communities together, who might otherwise never have interacted with each other. It succeeded as a placemaking event insofar as it contributed to community resilience by promoting cross-cultural engagement. It also helped to strengthen cultural identification processes for a dislocated migrant community. Many members of the audience hailing from North Africa told the artist that the event “was the closest they felt to being back in their community” (of origin). In a sense, the work created a home away from home for North African migrants, introducing this home and its rituals to a host community in Italy.