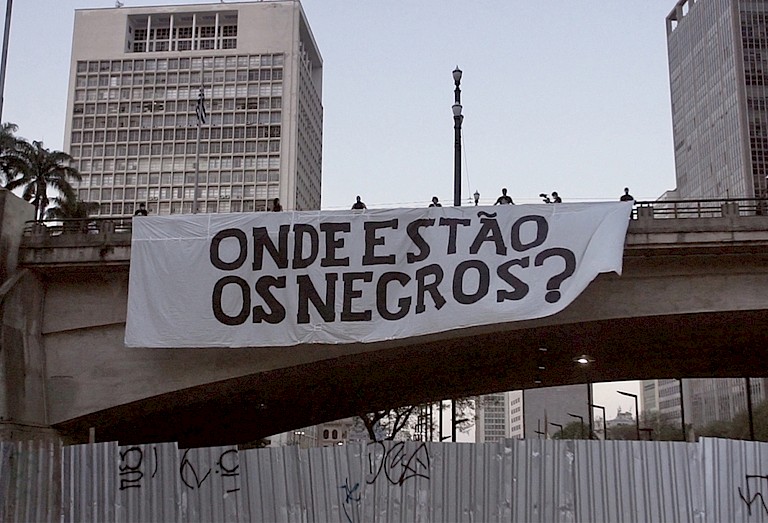 Frente 3 de Maio takes a radical plunge into social issues in Brazil with this aesthetic of direct intervention. Stretching the boundaries between art and politics, the group articulates itself with a series of people and movements ranging from academic and intellectual circles to organized fans, students, and social movements.

This work is closely linked to racism, which is a very introjected culture in Brazil and comes from a slavery heritage that has always existed to privilege the elites at the expense of the people in general. Racism is spread in the most diverse ways and its maintenance is also given by the culture of fear in big cities.

They developed wide and important research on police racism in São Paulo and published a book “Zumbi Somos Nós” (“Zumbi Is Us” - Zumbi is an African Brazilian leader of runaway slaves), with graphics that show the processes of symbolic construction and the forms of violence against blacks. The work is an important source of data to understand the perverse processes of racism in Brazil.

One of the group's best-known actions took place in response to an episode of racism in football, between players Leandro Desábato, from the Argentine team Quilmes, and Grafite, from Sao Paulo Football Club, in which the former was fined for racism for calling Grafite “monkey”. The case caused the group to migrate to this other space, which at first presents itself as a democratic space, but which brings with it deep traces of social injustice, which is football.

In a match broadcast on national television, Frente Três de Fevereiro, in collaboration with organized fans, opened huge black, red and white flags during the game, a format normally used by fans, with the phrases: "Where are the blacks?", “Brasil Negro Salve” (a phrase of double interpretation that would be something between Brazil help the black people and slang to see the black people) and “Zumbi is us”.

On the day of the intervention, the collective infiltrated the fans and, with the help of the fans themselves, spread the flags over the heads of those occupants of those places - as usual in stadiums and organized fans of football clubs in Brazil. With this, the flags also gained visibility on TV stations that covered the match across the country.

This intervention exposure strategy made the episode of racial discrimination notorious on a national scale at least and with a huge reach since the audience of football matches are massively watched in the country, taking this questioning in a relevant and accessible place.

To carry out this “infiltration” in the soccer field with the flags created by the collective, it was allowed after dialogue and authorization from the stadium managers, security agents, among others involved in the organization of the championships.

The flags were also displayed at other times and at the invitation of cultural institutions in other places as well. Video recording and photography also became artistic works derived from the intervention.

In later exhibitions, the collective took the same questioning and instigated a dialogue on the same subject, which is relevant, since the racial debate in Brazil is something completely veiled. 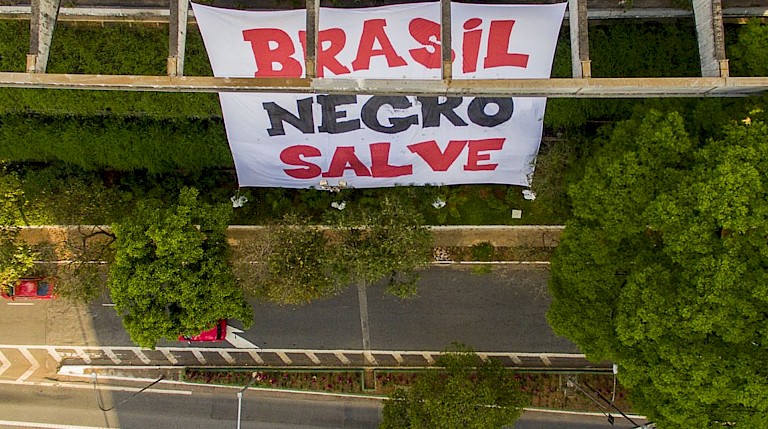 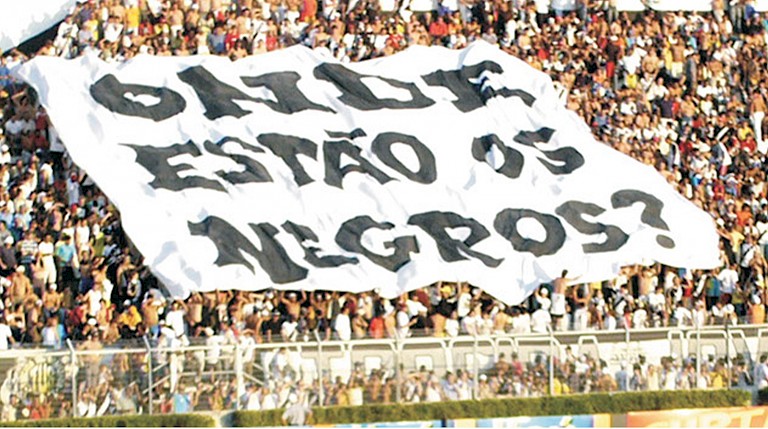 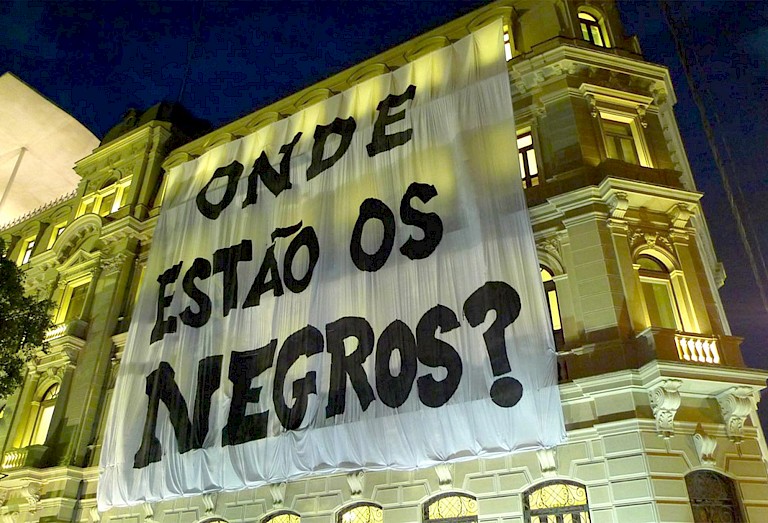 The Frente 3 de Fevereiro has broken down a historical thread that "naturally" is updated in new social practices, seeking to understand how these practices are structured, from the borders of slavery heritages intertwined in everyday human experience, from the possibility of breaking the slavery logic to inscribe other forms of sociability. The actions of this group collaborate with resistance niches and their strategies in an attempt to convert the discriminatory social violence into a symbolic resistance for the sake of the community, reinventing the ways of living in social practice.

The work reflects social conditions pointed out since 2004, but dialogues with history and the most recent moments of racism, mainly in Brazil, but it is completely possible to relate it to other countries where the African diaspora for enslavement, including the United States, where there have also been great debates about racism and police violence rooted in this pretext.

Historically speaking, the figure of Zumbi dos Palmares is important and crucial in the fight against slavery. It is usually talked about in schools, but in a superficial way, giving a villainous character to it. But with the advance of recognition of black identity in Brazil, this character is rescued and given due recognition, which is reflected in the phrase “Zumbi Somos Nós” (Zumbi is us), since Zumbi, enslaved, managed to escape and be the leader of an area where other slaves took refuge after their escape. Creating a place of community, resistance and confrontation, called “Quilombo”.

Another issue is also to think about the place where blacks occupy in society. In a country where more than 50% of the population considers themselves black, places of power, media, entertainment and aesthetic reference are mostly occupied by whites. And with police violence, the news is where the black is seen, in an unfair and stereotyped way, for the most part.

With that, we return to the problem of police violence, where many civilians are murdered in the midst of police operations, which, during an all-out disorderly war on drugs, carry out truculent operations in the favelas, without distinguishing who is or is not involved in drug trafficking. . Taking the lives of innocent people. That when denounced, unfortunately happens in a stereotyped way. Just putting everyone on the same label, minimizing the problems generated by the police instead of debating the urgent need for reform in the police structure.

With all these surveys, it is possible to reflect on the issues raised during the study of this work. It is a project that not only reflects the history and contemporary society but also invites questioning in the midst of one of the greatest passions of Brazilians: football. That it has always been understood as a democratic, accessible sport and that its consumption as entertainment also involves the same characteristics. However, episodes of racism in this environment end up serving as a metaphor to understand the Brazilian reality, always assimilated as a "racial democracy" thanks to the process of miscegenation throughout its history, but which served to hide racial problems that have always existed, but which they are refused to be questioned and debated.

In this direction, the Frente group has opened multiple discussions using various supports to discuss the issue of black people and the social, political and economic implications arising from sociocultural representations and moral standards that result in discrimination and social devaluation in Brazil and also in the outdoors. His works are aimed at a broader perspective and reflections than what his tracks and actions reveal.