The construction of the Santiago Metro Line 3, through the historic center of the Chilean capital, has prevented vehicular traffic through "Bandera" street since 2013. Converted into car parking for a period, the place has
become more playful. with an appropriation, being an intervention with street furniture, graffiti on the floor, bike racks and vegetation.
Bringing a new use to the area and providing another relationship of the citizen with the urban space.
Initially the project was supposed to be temporary, and it only took a couple of linear blocks. Currently it is a permanent intervention with several streets painted and designed, making Paseo Bandera not only a touristic attraction but also impacting the local economy. 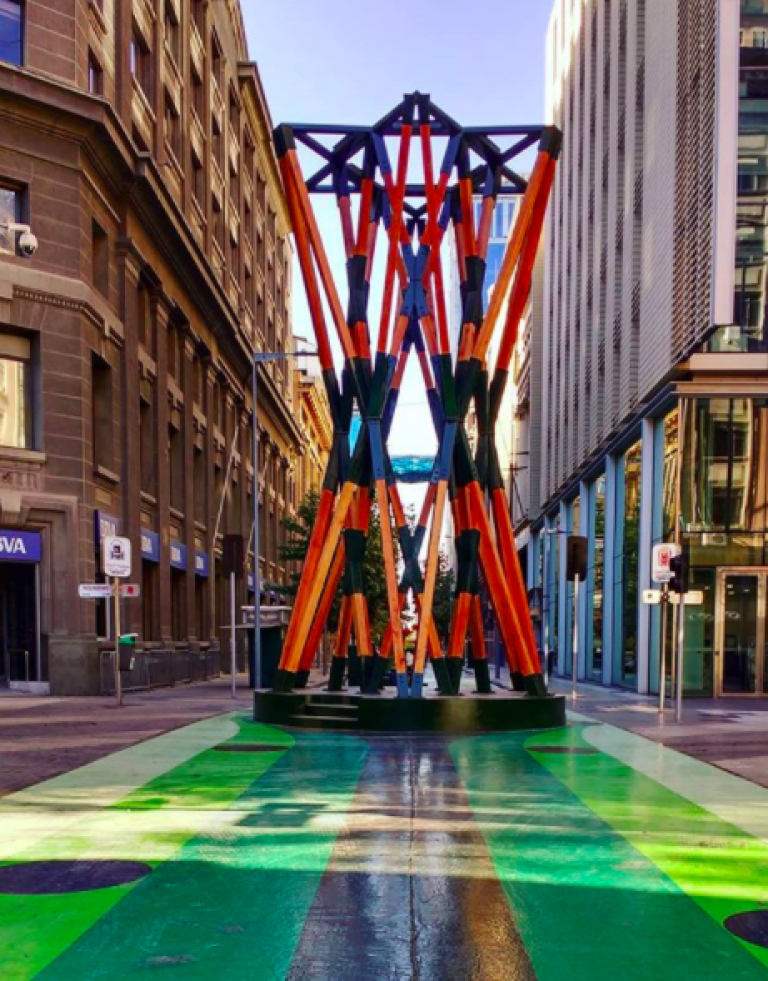 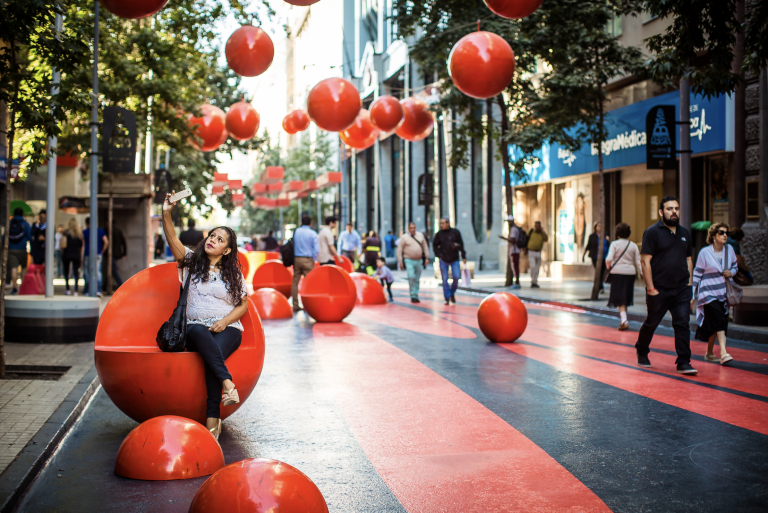 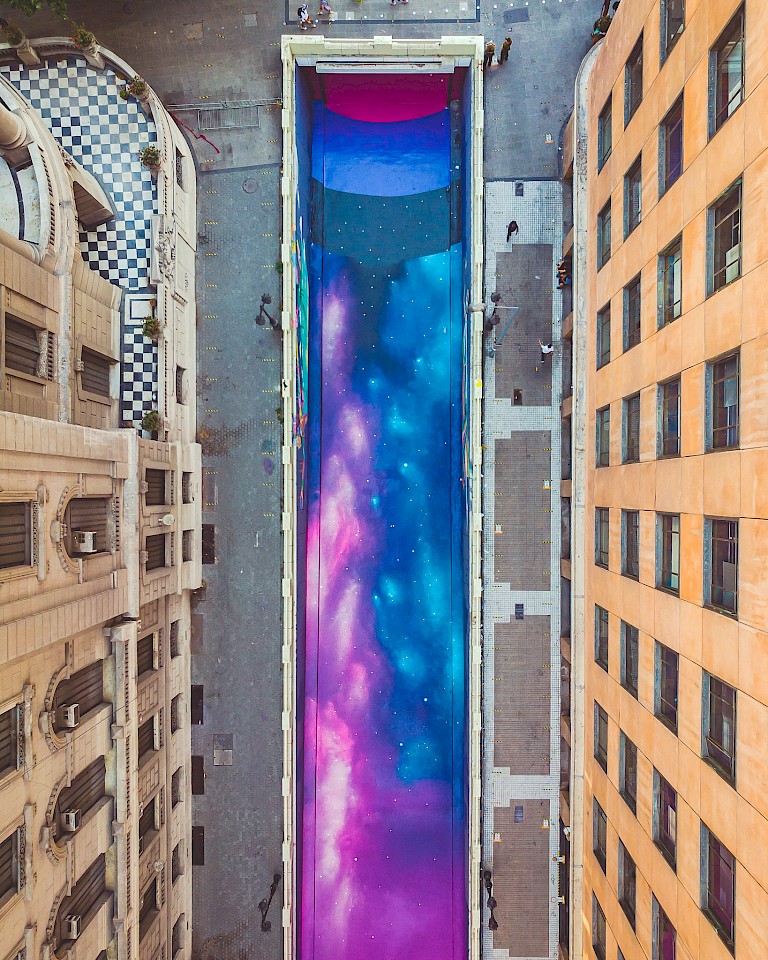 Alameda Avenue is the main road that crosses Santiago from east to west, it is a kind of backbone of the city, it supports much of the flow of cars and passes through one side of the historical center. Bandera Street is one of the two underground streets that crosses Alameda Street. The other underground street still has car traffic, Bandera Street does not anymore therefore it becomes one of the ways to access the historical center of Santiago.
This area possesses the highest concentration of administrative buildings, banks, museums, stores, and other sites of tourist interest. the entrance is through La Bolsa del Comercio, that is very representative for the city.

The construction of line 3 of the Santiago Metro involved cutting off vehicular traffic along Bandera Street since 2013. As a result, this underpass was used for several years as a car parking lot and materials warehouse. Some institutional efforts were made to intervene it, truncated mainly for political and administrative reasons. At some point the initiative was possible, when the city administration took the first step and contacted the office Estudio Victoria - led by muralist Dasic Fernandez (with a background in Architecture) and architect Juan Carlos Lopez - to present a proposal for intervention at Bandera Street that would happen during the 9 months remaining to finish the construction of the subway in that area and the reopening of the street for vehicular flow.

The members of Estudio Victoria enthusiastically presented a proposal that exceeded the initial scope of what was proposed to the institutions in terms of budget, proportions, labor and amount of space to be intervened. In spite of this, the proposal was endorsed, and work began, in parallel to the management of the missing resources.

The roadway was fenced and covered for a month for the construction of the Paseo Bandera. About 20 local and Latin American muralists worked hand in hand with Estudio Victoria in some sort of visual choreography for 8-to-10-hour days, in order to intervene about 350 linear meters of asphalt. Three streets separated into three different themes or concepts: Sustainability, Lounge and Cultural Focus. Not conceived as a mural in terms of something to contemplate but as a work to literally walk on it, although it is worth mentioning the presence of murals as part of the urban experience.

In these 3,300 square meters are found, as graphic references, geographical landmarks of Chile, the mountain range and its fauna and coast, culture and traditions, also alludes to recent history including the social outbreak, mentioning, for example, some of the victims of eye trauma at the hands of the police during demonstrations. The intervention also consists of urban furniture, meeting points and murals. The Paseo Bandera is an overflow of shapes and colors that contrasts with the predominant gray of the architecture of the historical center. Dasic Fernández recalls the feeling of the inhabitants when the promenade was opened. As if they were in a different place, not the fragment of city they had always known as Bandera Street, this new space was friendly and full of life. This characteristic has marked the place since its opening, it has been appropriated not only by locals but also by migrants and tourists who have found a space where they can somehow feel local.

At the time of the completion of the subway, the city administration, in view of the great approval and popularity of the intervention, decided to leave Paseo Bandera as a permanent pedestrian walkway.

Divided in portions, each section was designed in relation to a concept or in relation to the buildings around on the street, near the section where those who contributed to the funding of the street were placed. Topics like patrimony, sustainability or encounter, intervene in the space through painting and designing the urban furniture. For the first part of the project (2017) at least 20 Chilean and Latin American artists were invited to participate in it. For the second part, in 2020, the already existing murals were touched up and three new sections were painted focusing on working with color and creating certain atmospheres, the geography of the country and the last one was developed around the social outburst as a homage to the victims of eye injuries.

Many of these interventions are at the frontier between art and tactical urbanism, creating more devices that regulate the use of public spaces. The project overgrew its initial objective in terms of temporality and spatiality, in terms of citizen appropriation, each pushed for the widening of the project in both of the street’s directions until it ended up staying permanently creating a pedestrian street that won public space for the pedestrians in the middle of the city. This widening or creation of public spaces is directly related to the neoliberal city that creates corridors for transit and leisure associated with consumerism. It is very significant that a project of this characteristics was sponsored so much by the private sectors as it was approved by the public sectors. In this sense, is worth remembering that this project was developed in a country that has been recognized by many investigators as one of the principal Neo liberal laboratories of the world, circumstance that has resulted in a strong mobilization and insurrection process of the working class that are currently disputing in many levels the notion of what “the public”, “the common” means.

Balancing arts and culture in terms of rights, inheritance of the past and construction of new vales, and the culture as merchandise to be consumed is not only hard to do in a big city, but it is a hard conversation that is necessary that happens. Using arts and culture to contribute to the development of a particular area within a city is a valid strategy, even if it is to augment consumption. What is important is to understand that these interventions cannot replace the artistic and cultural manifestations that are a reflection of current societies humans live in, no matter the location or culture, east or west, north or south. In that sense, promoting the creation of artworks that serve communities even if it criticizes the instrumentalization of the arts, is very important.

The best way is to create a dialogue between the government, the private interests, and the citizens.