On the 2nd of November 1917, the British peer and former Prime Minister Alfred Balfour issued a public statement to Baron Rothschild and the Zionist Federation declaring the British Government’s support for “the establishment in Palestine of a national home for the Jewish people.” The Balfour Declaration, as the statement came to be known, was included in the terms of the British Mandate for Palestine, and is considered by many to be instrumental in the founding of the modern State of Israel. Understandably, the Declaration was not received well by Palestinian Arabs; the Palestinian-born public intellectual Edward Said condemned the Declaration as one “made by a European power… about a non-European territory… in a flat disregard of both the presence and wishes of the native majority resident in that territory.”

The Balfour Tea Party was a street party initiated and organized by British artist Banksy outside his Walled Off Art Hotel in Bethlehem. Located at Caritas Street 182, alongside part of a 700km long wall enclosing an occupied Palestine, the street party took place in November 2017, on the 100th anniversary of the Balfour Declaration. For the event, an extended dining table and seats were arranged in the street, and the scene was decked out with Union Jack flags, as though to mark a royal or state celebration. In this case, however, the flags were tattered and the party hats riddled with bullet holes. The British-style tea party hosted 50 Palestinian refugee children as guests of honour, and featured an actor dressed as H.M. Queen Elizabeth II, who unveiled a concrete plaque on the military barrier proclaiming “Er, Sorry” (punning on the Royal cypher EIIR, or Elizabeth II Regina).

According to the artist, the aim of the street party was two-fold - to apologise to local Palestinians on behalf of the British people - whose ancestors set in motion events that has left them homeless. Secondly to make British people back home aware that we are partly responsible for creating the current troubles and that we perhaps owe the region more than a shrug and a resigned expression.

It would appear then that the Balfour Tea Party was intended as a political statement or provocation concerning Britain’s role in the ongoing conflicts between Israel on one hand, and Palestine and other Arab states on the other. Attracting coverage from 37 international media outlets, the work clearly reached a large global audience. On the ground, the tea party became a spontaneous and unauthorised platform for local activists; a group associated with the nearby Aida Refugee Camp “crashed” the party, and an activist planted a Palestinian flag in the middle of a cake. Given the party’s location in the Israeli occupied West Bank, it likely added a controversial dimension to the celebratory spirit attending the centenary of the Balfour Declaration. The Balfour Tea Party successfully intervened in a highly contested domain of cultural memory, operating both locally (on site) and through globalized media to bring a critical perspective to public consciousness. 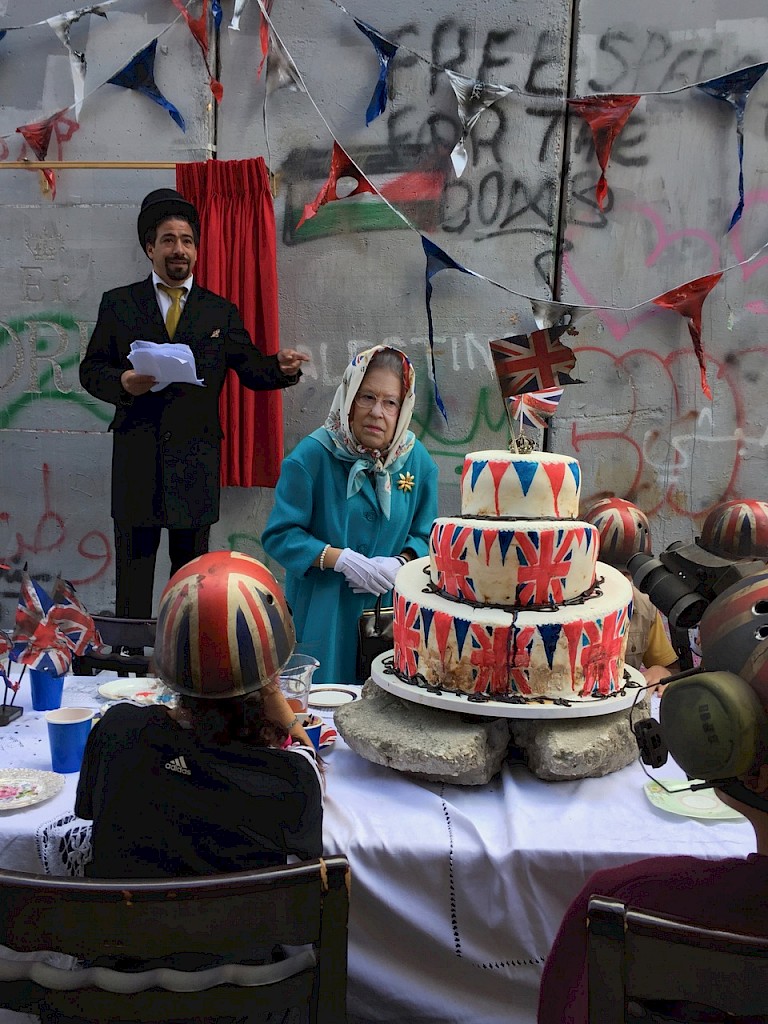 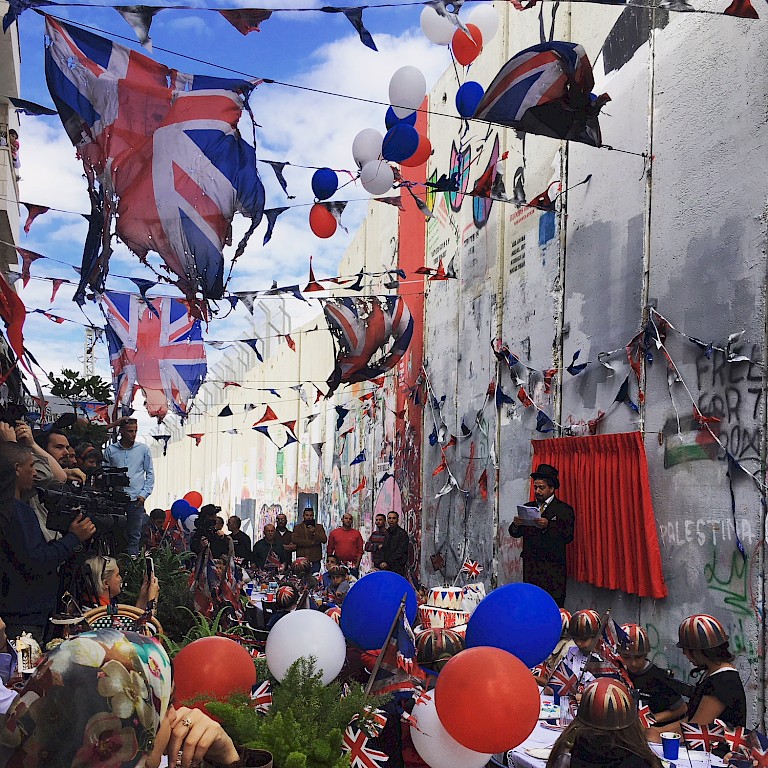 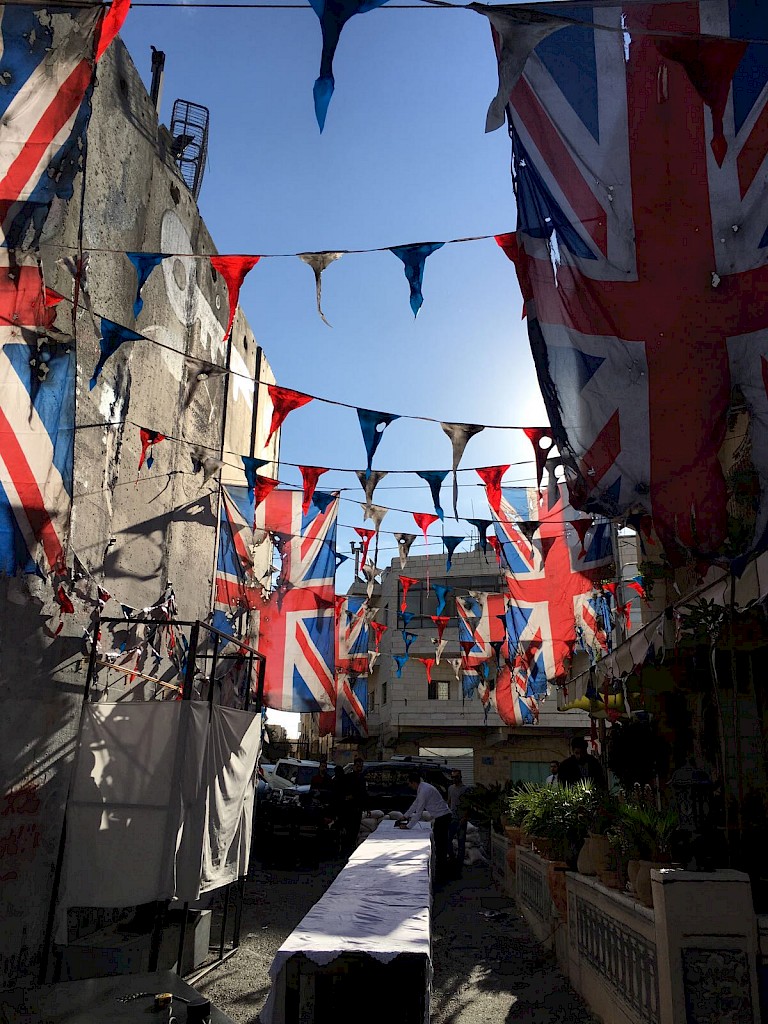 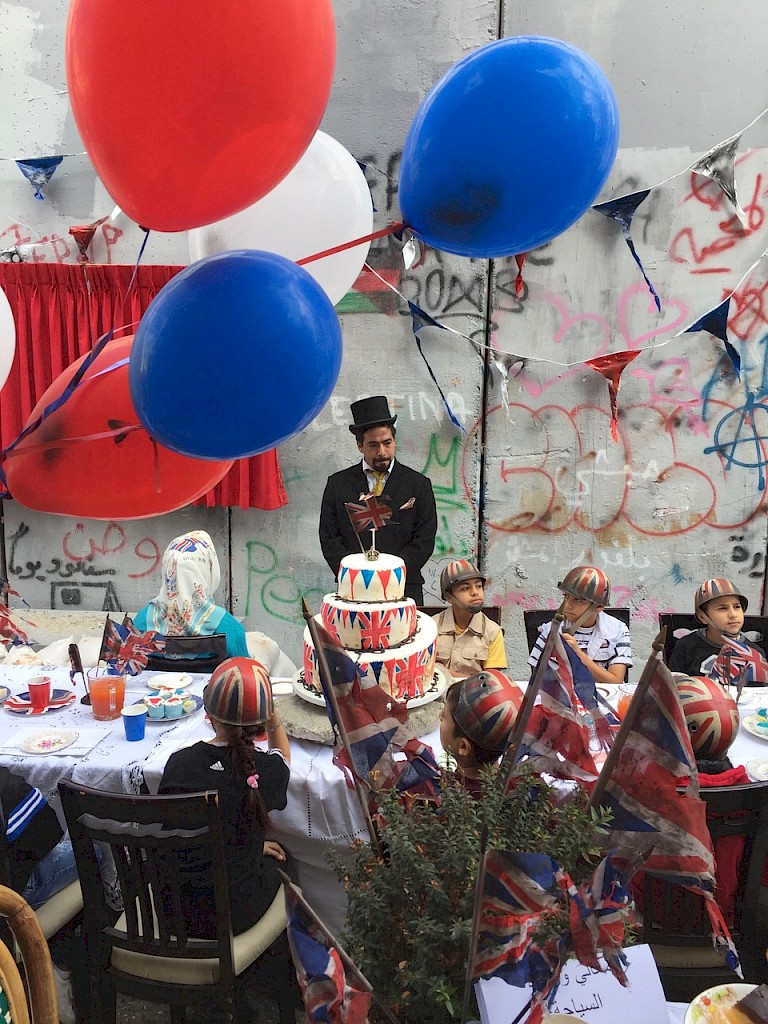