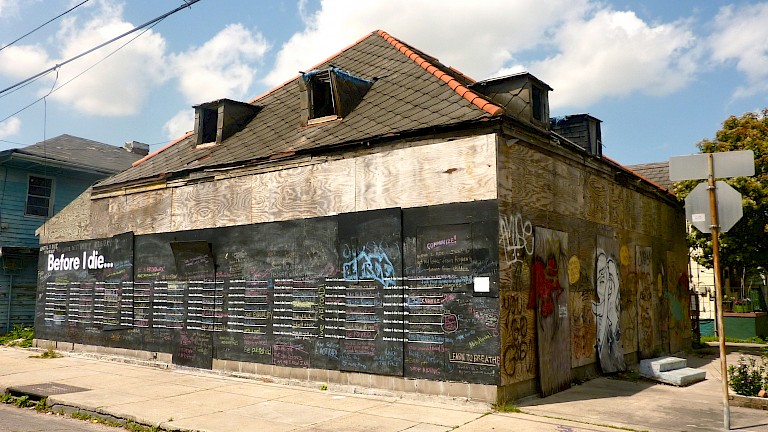 Before I Die is an interactive public art project that invites people to remember and share what is important to them in public space. The first installation of the project was on a wall of an abandoned house in New Orleans. It was painted with chalkboard paint and stenciled with a grid of the sentence “Before I die I want to _____.” Passersby can use chalk to write directly on the wall. The project is about creating a public space for contemplation, remembering what is truly important to you, and reimagining how our public spaces can better reflect what matters to us as a community and as individuals.

The project was self-initiated and stems from the artist’s interests in public spaces and personal wellbeing. For Chang, who has a background in design, urban planning, and architecture, the design of our public spaces should reflect what's important to us as a community and as individuals. The seeds of this project were planted when Chang was living and working in Helsinki, Finland. Over the course of a few months, she and a few close friends each suffered the loss of someone they loved very much. “Those months made me very aware that life is brief and tender and not to be delayed,” she has said. “It made me think hard about what was really important to me. I realized I want to enjoy more cities with the people I love. I also realized my heart was in public space and experimenting in different ways to remind ourselves about the important things in life. So I ended my job, moved to New Orleans in 2010, and started to fool around with public space again.”

New Orleans has some of the most beautiful architecture in the world, yet it also ranks at the top in cities with the highest percentage of blighted properties in the country. Chang lives a few blocks from the first location of the Before I Die series. It had been a space that collected dust and graffiti over the years. Chang thought about how she could make this a nicer space for the neighborhood, and created a space where people could share their hopes and dreams with each other.

“We don’t have many opportunities to leave messages to each other in public space. I think that’s why the Before I Die project has resonated with so many people. It shows how powerful our public spaces can be if we are given the opportunity to have a voice and share with one another,” she says. And she continues, “It’s about knowing you’re not alone. It’s about understanding your neighbors in a new and enlightening way. It’s about snapping out of it and remembering why you want to be alive in the world today. By reimagining the ways we can use public space to share, the people around us can not only help us make better neighborhoods but they can also help us lead better lives.”

Chang is a co-founder of Civic Center, a civic design studio in New Orleans, which has created a Before I Die toolkit with stencils to help people create walls in their own communities. Before I Die walls have been created in Mexico, the Netherlands, Kazakhstan, the UK, and beyond, and it has been in various languages including Russian, Portuguese, Spanish, Kazakh, and French. A book about the project will be published by St Martin’s Press and come out in the Spring of 2013.