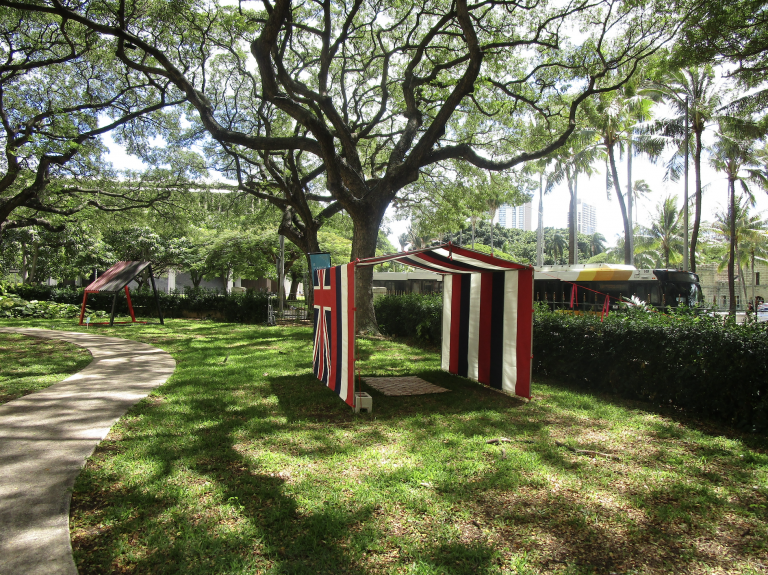 Senior artist Bernice Akamine has developed Ku’u One Hanau over the duration of her practice. The 2019 iteration, presented by the Honolulu Biennial, is described in this case study. A multi-site work across four locations, the tent-like structures related to the situation of houselessness that is disproportionately experienced within the Indigenous communities of Hawai’i. Akamine herself identifies as part Indigenous Hawai’ian. The work fits within the larger framework of the Biennial’s theme regarding its sites, the land that is a repository of enduring histories and the continuum of indigenous knowledge.

Ku’u One Hānau was one of two projects by artist Bernice Akamine, that were part of the 2019 Honolulu Biennial. Ku’u One Hānau, translating into “The Sands of My Birth (Hawai’ian), consisted of five tents, each made of an aluminum frame, similar to those used by the “houseless.” The project highlights communities of the houseless living in Hawai’i. There is an anonymous saying, "We are not homeless, we are houseless. Hawai’i is our home." The frames were tented with a Hawai’ian flag. The symbolism of the flag, Akamine says, is “not about nationalism so much as it is about an appeal to identity.” She hopes the flag will give passing Hawai’ians a feeling of “identifying with the work before they even realize what it's about.” Of the flag, she says, “To me, it's a rallying call, in part. It's also a sign of protest.” Inside, on the floor of the structure, Akamine placed woven cardboard mats. The mats were a reference to traditional Hawai’ian sleeping mats. Each stamp used has a small backstory. Symbols on the mats included bullet casings, representing the evicted houseless community fronting Makua live-fire training site; grains of rice, representing the only food that some of the families would have at the end of the month when they had the least money; wana or sea urchin, representing the Hawai’ian families who would gather what they could from the ocean in places on the East Coast of the island of O'ahu, giving them a sense of connection to Hawai'I and, the sun representing hope for a better future.

Since Ku'u One Hānau was conceived in 1997 houselessness in the State of Hawai’i has dramatically risen to the second highest number of houseless residents--approximately 45.5 per 10,000 residents with 51% self‐identifying as Native Hawai’ian/Pacific Islander. The goal of the artwork is to break down barriers and create dialogue between the houseless and the larger community, by focusing on commonalities. Ku'u One Hānau at Honolulu Biennial 2019 gave viewers a small glimpse into the world of houselessness.

As she was researching towards her Biennial project, Akamine had the co-operation of Pastor Kaleo Patterson from the Hawai’i Eccumenical Coalition, as well as other priests on Hawai’i and O’ahu. They invited the artist to accompany them when they went into houseless communities to distribute supplies. As Akamine participated in this work, she was able to introduce herself and have dialogue with houseless communities. Professor Rick Mills of the University of Hawai’i’s Art and Art History department contributed to the discussions that helped the artist develop her project. Akamine had used the photographs of Ed Greevey in her earlier iteration of Ku'u One Hanau, as a graduate student in San Diego. Greevey, has been documenting the Hawai’ian Rights Movement for over 20 years, and allowed Akamine to accompany him as he worked, so that she could speak with residents. The artist credits Glenn Akamine, Riley and Jewel Akamine, Kaiulani Akamine and Enrick Ortiz, Donna Keithley, Jo Ann Miyamoto-Wicks and Azeza Aladin as contributors who took on support tasks that are crucial but often invisible in an artist’s works.

Responses to the project observed by the artist included audiences writing their thoughts on houselessness on the mat at the Hawai’i State Art Museum; at the McCoy Pavilion the installation’s tent was stolen and Akamine hopes that it was taken to be used as a shelter. Docents and the artist herself had many conversations about houselessness with visitors to the project 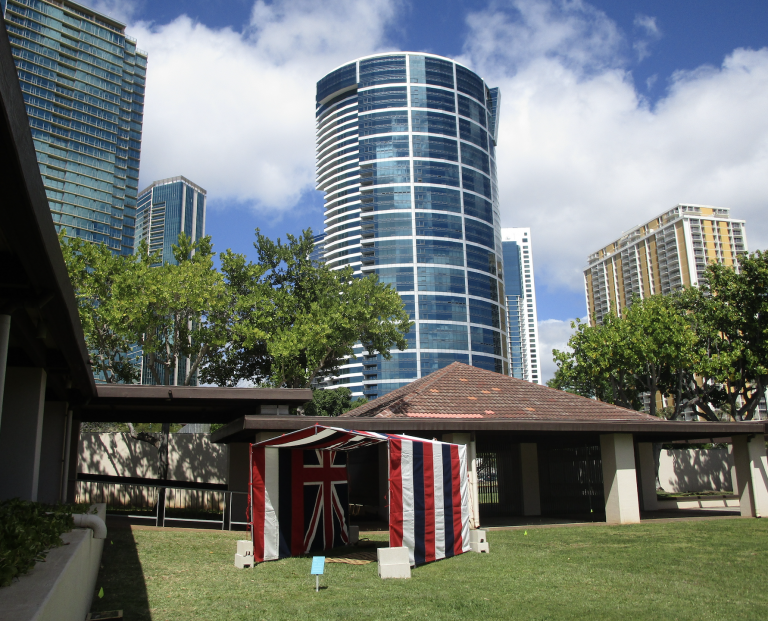 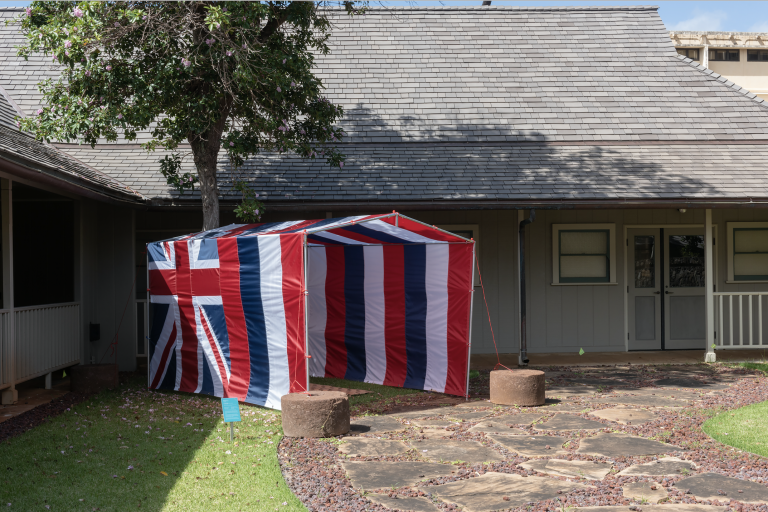