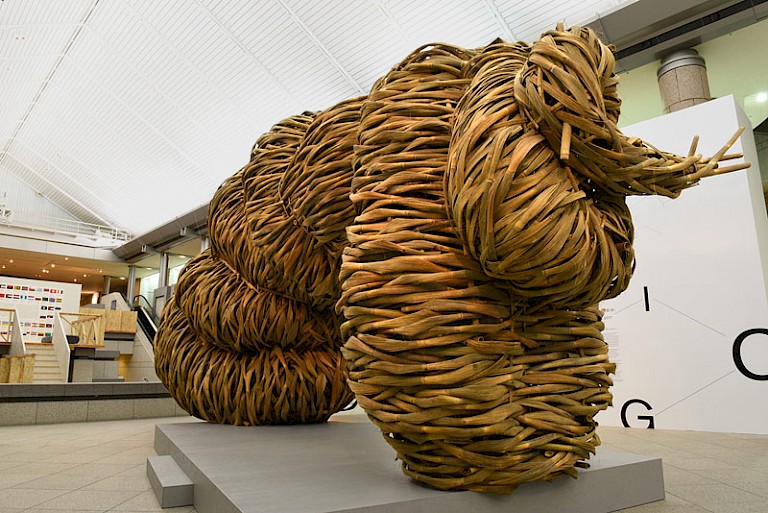 “Big Trees” is a cross section of works between art and architecture displaying the assimilation between urban and nature. The artist created this site-specific installation as a response of an invitation of “Roots” theme from Frankfurt Book Fair 2015 at Frankfurter Kunstveiren, Frankfurt, Germany with four Indonesian artists were invited to the event. The artist notices through prior research that historically there were two large trees that were planted in front of Kunstveiren and immediately thought to re-enact the memory of those trees. The inspiration came from big trees as landmarks that commonly spotted in Indonesia with places such as Jogjakarta City Square with two Banyan trees placed in the middle of the square that also utilized by locals as meet up places. The artist translated this into a bunch of bamboos weaved reaching the height of 9 meters tall that resembles four giant Banyan trees wrapping the façade of Franfurter Kunstveiren.

Joko, the artist, is not foreign to Bamboo as a medium - Bamboo was his go-to material since his early college days in Bandung Institute of Technology (ITB). His contribution to Bamboo is his innovation that allows the medium to have the ability to shape and mold Bamboo that is notoriously known as a rigid material into an intended shape. Two Bamboo species named Awitali and Betung are choosen for this project as they are known to have high density compared to others thus not easily cracked for molding and shaping.

There are roughly 1,500 Bamboos that are needed for the project. These Bamboos were conditioned and processed in his workshop in Indonesia and then shipped to Frankfurt and took almost a month to reach the destination. One of Joko’s main concerns was the possible damage of cargo during shipping caused by extreme weather or fungi infestation. Luckly when these Bamboos reached Frankfurt they were covered with sea water foam that assist in preserving and strengthening the material even more thus further increase their durability for construction.

Upon setup and installation, due to the grand scale of the display this project attracts locals and further increased public appreciation trus creates a sense of ownership. Upon completion the mayor of Frankfurt made a personal request to Frankfurt Book Fair to not to be dismantled after the event is over and to be enacted for the following year.

'Big Trees' brought a nature changing issue, which one of them is to criticize the lack of trees in big cities. Joko’s work is also a reflecting concerns about the depletion of cultivated bamboo forests as well as the decrease number of bamboo craftsman that was caused by the new wave of globalisation. The display of ‘Big Trees’ project attracts researchers from other areas such as botanists and architects and even the public to further explore their interactions with bamboo raw materials and understanding the materials used for constructions. With the innovation and experimentation technique of processing bamboo material, the artist has successfully change public perception of bamboo as a rigid form into a flexible and fluid material that can be expressed into movement and rhythm within the form itself.

This project is an invitation to a Frankfurt Book Fair 2015 event with funding provided by National Gallery of Indonesia. This is a very tedious and complex project as the preparation involves conditioning 1,500 bamboos in one country and shipping all of them to another in order to increase the durability of the material. Certification process needs to be performed as well for all materials that indicate the Bamboos are non-flammable. 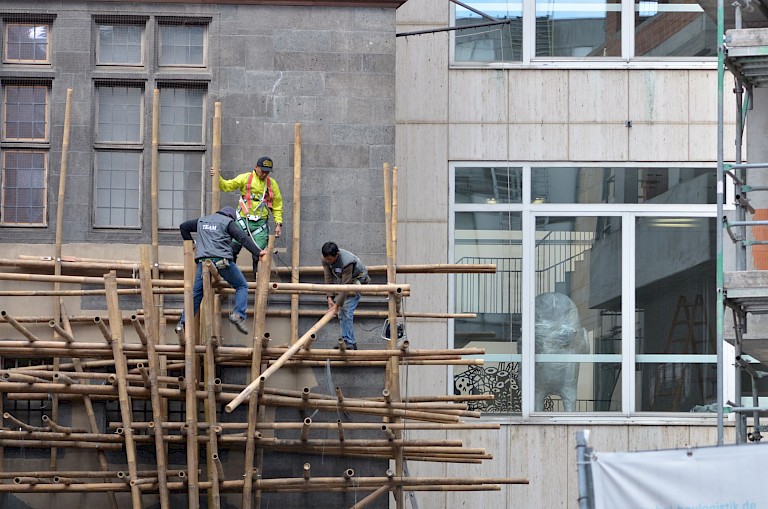 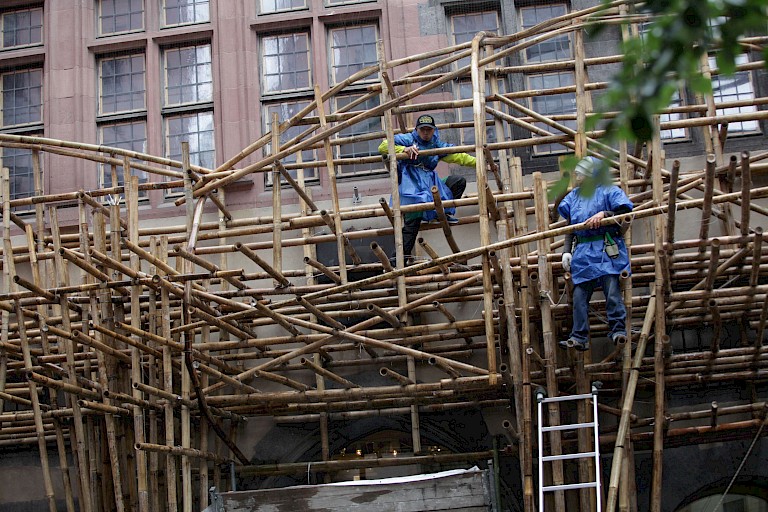 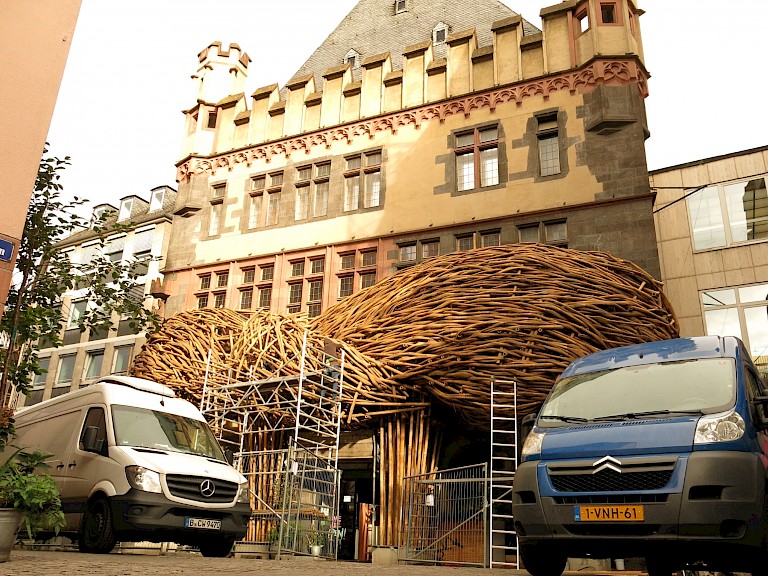 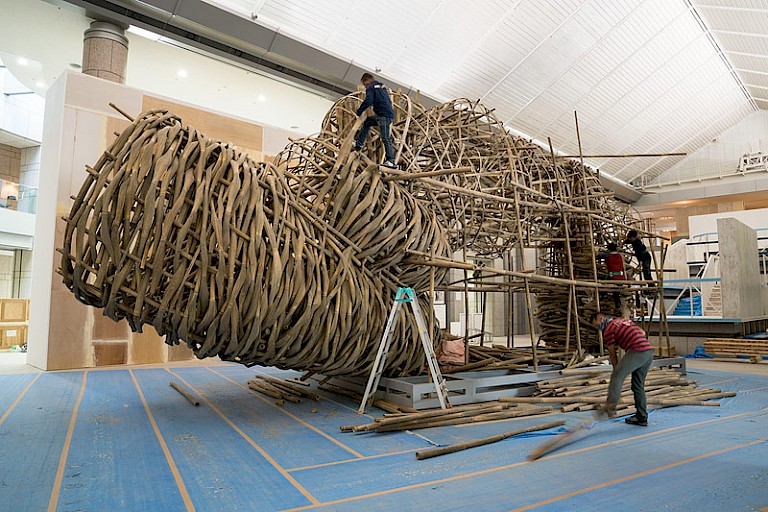 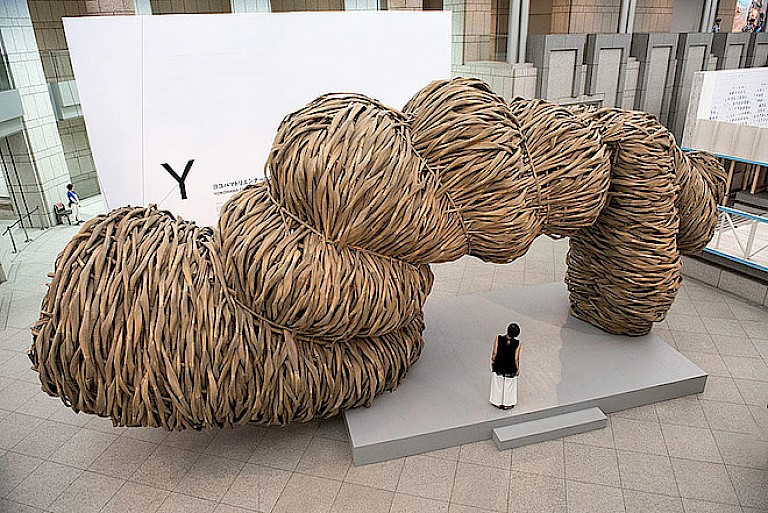