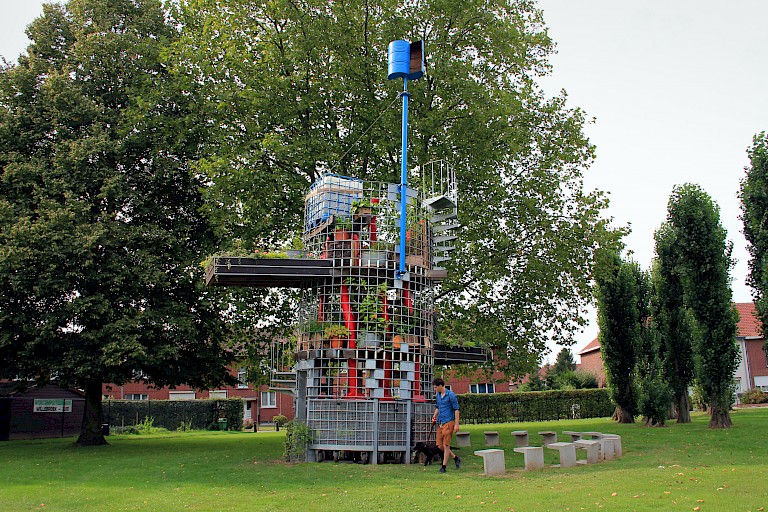 Willebroek is a village located in the Belgian province of Antwerp. It is connected to Brussels by the Willebroek Canal, which is one of the oldest canals in Europe, built in XVI century. Thanks to the canal, the commercial, infrastructural and industrial development of the region began. During WWII in Willebroek there was a Nazi concentration camp, one of the best conserved in Europe. Its renovation, made carefully according to the architectural ''historical truth'', seems to renovate also its symbolical character representing human life's destruction. In the same area, in 2015, a hybrid permanent art installation devoted to life regeneration and ''hotel'' for the reproduction of insects and plants named Biodiversity Tower was installed.

Biodiversity Tower was produced in the frame of a cultural program promoted by the Willebroek Municipality, by the New Patrons public art program, and by biologist and artist Angelo Vermeulen, founding member of Space Ecologies Art and Design transdisciplinary network (SEADS), in collaboration with the Willebroek Master Composters.

It took six years to realise Biodiversity Tower, which has been possible thanks to the collaboration of different professionals from the fields of architecture, design, bio-art, engineering, woodworking, ecology and horticulture. First of all, the working group built the metal tower structure, together with architect Kris Mys. Later, different components like floors, terraces, insect hotel materials, plants, wind turbine and water pump, drip irrigation system, compost trolleys, and compost heat distribution pipes, were gradually added.

Willebroek Park is surrounded by a social housing complex, whose inhabitants are from different cultural backgrounds. It is regularly visited by schools, thanks to an educational program by the Willebroek Municipality and the Willebroek Master Composters which aims to facilitate the children’s knowledge of the composting processes and the ecological systems, in order to promote the preservation of biodiversity, combining art, architecture, science and local expertise. For the same reason, the tower is surrounded by concrete seating elements and by a spiral staircase on the outside, where the visitors can walk and explore the tower as a site. At the same time, they can experience the life of different components of the “biodiversity artwork”, above all, that of insects that don't stop working and developing their life spaces despite the human presence and, metaphorically, despite the threat of extinction caused by human activities. By doing that, Biodiversity Tower soon became a new space for meeting and education, promoted also by the local touristic guides as cultural landmark of the multicultural neighbourhood.

As the artist explains, no electronics have been used for creating it as instead they have strictly used analog systems which more radically increases the biodiversity. Typical insect hotel materials have been complemented with a diversity of plants, a drip irrigation system and passive heat gradients using heat from the compost trolleys, which is captured and diverted to higher areas in the tower through the red tubes. In the same way, the wind turbine pumps water to the reservoir placed at the top of the tower; subsequently, through gravity, the water gradually trickles down the ecosystem through blue tubes.

Biodiversity tower is an art installation and an operational mechanism that is able to reproduce and enlarge itself with the growing of plants and the reproduction of insects. It's design, in fact, is conceived as a grid-based outer wall, enabling flexibility in the interior design, where new beams can be easily inserted to create new levels and future forms of life regeneration and expansion.

The experimental design and the sustainable technical tools allow the creation of a biological and cultural world that is self-sufficient, functioning as an incessant biodiversity machine and, at the same time, working as an educational space. It combines form, DIY attitude and high-end engineering, since, as Angelo Vermeulen points out, “the square plates that have been welded in some of the grid holes are specifically positioned at those spots in order to optimize structural integrity, and this has obviously been calculated by computer”.

The excellence of the project consists of several elements.

Biodiversity tower creates a space for life which is also a machine for the preservation and improvement of biodiversity in a context which is historically linked to the WWII, renovated by the Nazi monumental symbol of life’s destruction, and nowadays characterized by cultural and social diversity.

Being based on an open-grid structure, the design of the tower results by a constant, self-reproductive and changing process activated by the life and work of the insects, and by the interaction with the surrounding environmental, social and cultural context.

Thanks to its technical characteristics, Biodiversity Tower can be considered as a prototype to be reproduced and adapted to other places, as ecological and sustainable non-electric system and as transdisciplinary tool for experimentation and divulgation, for promoting intergenerational knowledge production and transmission.

Finally, the participative side of the project has been and still is one of the most important factors for the production and maintenance of Biodiverity Tower. The artwork is the outcome of the interaction between the artist's research and the knowledge of Master Composters, activating a co-creation process: the Master Composters have collaborated at the design and production of the interior elements of the tower, by selecting optimal materials for the insect hotel and choosing specific plants that would attract the insects; the artist has learned and practised about the composting process, by visiting regularly the composting area located in Wijkcomposteerpark Willebroek-Zuid, and getting acquainted with the local neighbourhood. Other components of the tower, like the Savonius wind turbine, are DIY systems entirely created by volunteering collaborators.

The preservation and the implementation of biodiversity is an European common issue and a fundamental theme for reflecting on Europe as a union of different historical, cultural and geographical diversities, in response to the increasing forms of extreme nationalism, protectionism and legitimized xenophobia, which nowadays are crossing the continent.

In this frame, Biodiversity Tower represents a biological and cultural response, creating an empathic dimension where humans, animals and other living forms share the common need of space for life. 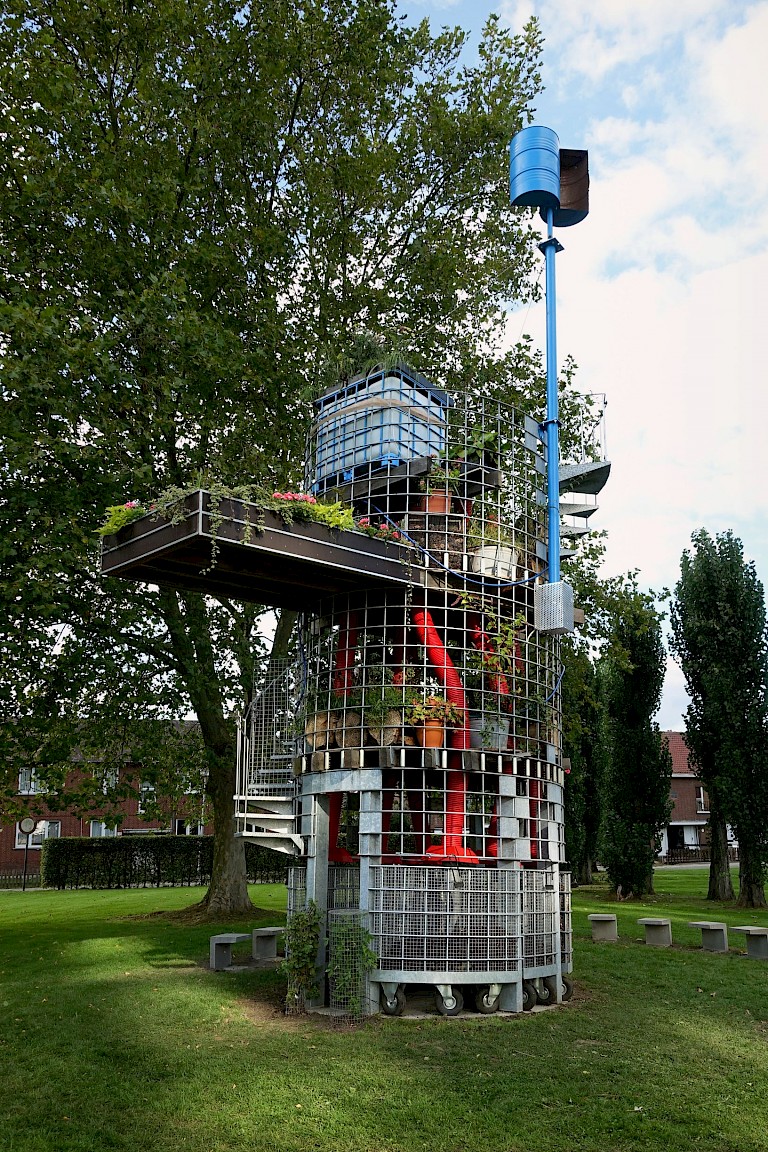 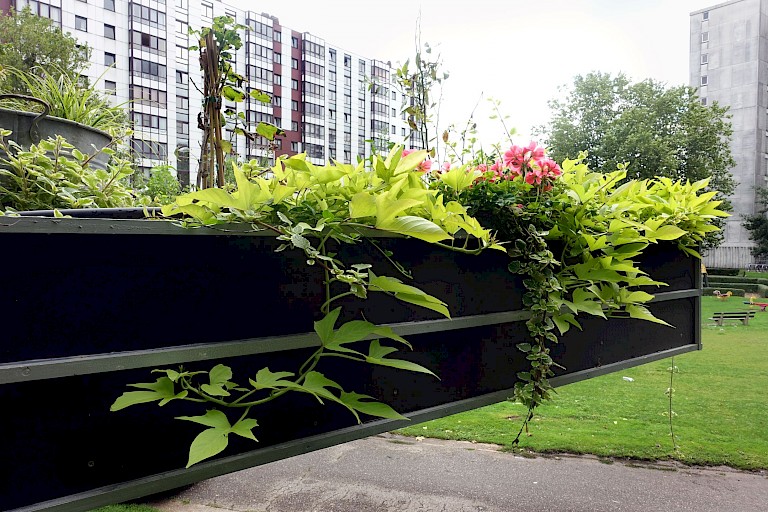 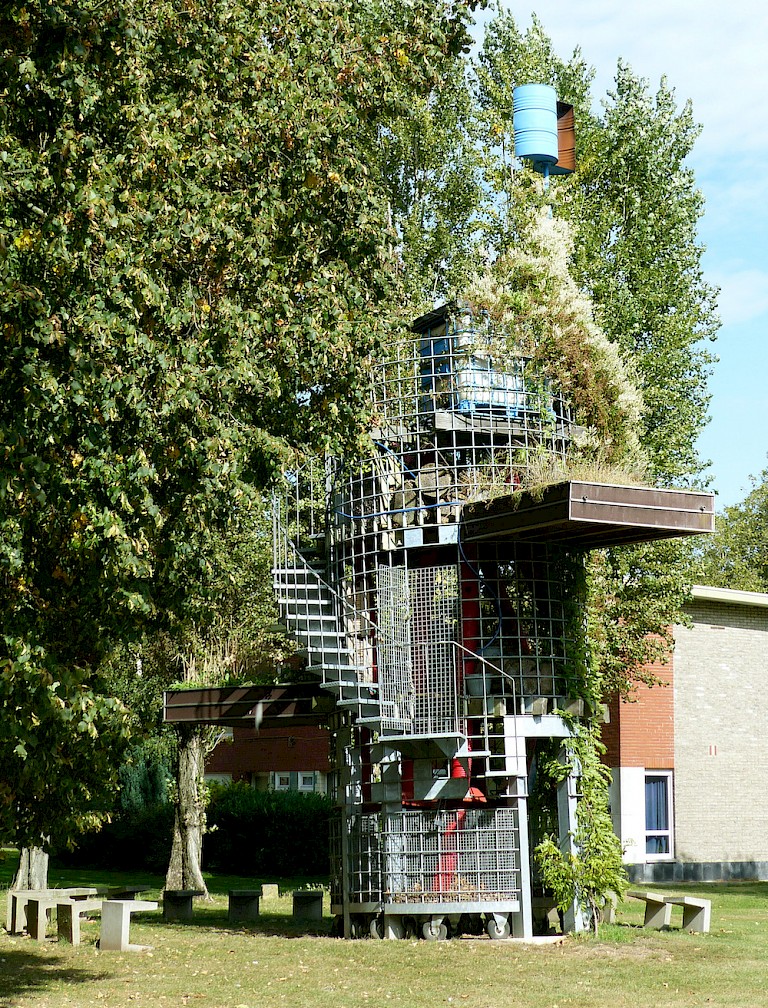