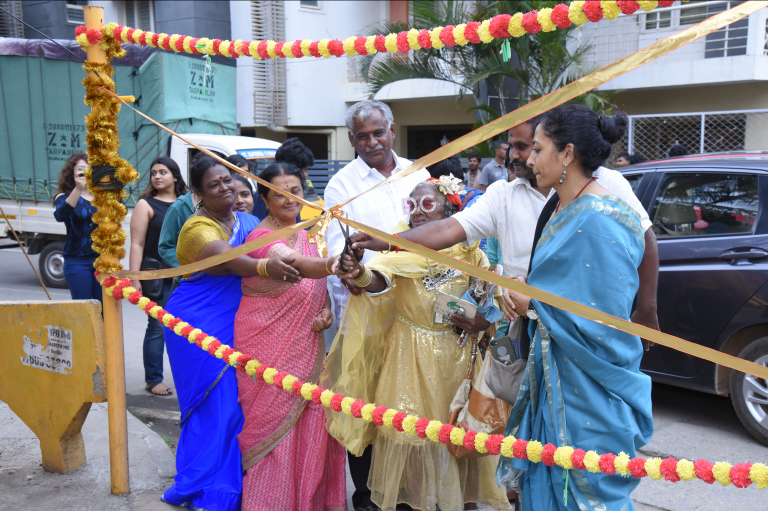 Cecilia’ed the project started in early 2019. Indu got the Public Art Grant in 2019 from FICA (Foundation of Indian Contemporary Art) to realise this project.
塞西莉亚（Cecilia’ed）项目始于2019年初。因杜（Indu）在2019年获得了FICA（印度当代艺术基金会）的公共艺术拨款来实现这个项目。
Indu wanted to talk about safety for women in public spaces and in a way reclaim them. She once had been attacked near her house and it shook her. She didn’t want to be quiet. She would attend numerous protests and strikes in the city when a woman was harassed or raped but wanted to engage on a deeper level and learn this bit more. Indu started researching the multiple reasons as to why these things happen. From urban planning to patriarchy to media there were many sources to understand issues. Hence the reading research for the project started in 2017-18.

The project was consciously situated within the local social context (ward no .24) -the space near Indu’s house, as she was closely connected to this area. Indu stays in a lower middle class area and wanted to address issues around her home so she started looking at different spaces. Indu believes that change starts at home. Having observed herd reactions in the area Indu was gathering data for the actual performance - the street re-openings.

The project also spoke about works that need not be tangible in nature but more as a collaborative community feeling, taking action and working in a local area. The power of the local language was significant and being able to speak 4 of the local languages helped Indu immensely in communicating with the people.

Indu met Cecilia around four years ago as she was cycling her way to church. She was 75 years old then, and had an amazing sense of fashion. She lived alone and her source of income was begging in the church, where Indu befriended Cecilia. Indu says, “She (Cecilia) has gone through a lot to be able to exist as a single woman in the city. Her struggles were similar to the ones I wanted to talk about. As a single woman in the city her struggles resonated with me and I spoke about the project to her. She just asked me one question ‘Would my photo come in the papers? It will give me immunity from these people around’.” Cecilia has been extremely supportive of the project and puts together clothes for Indu to photograph her and enjoys the fanfare she gets. 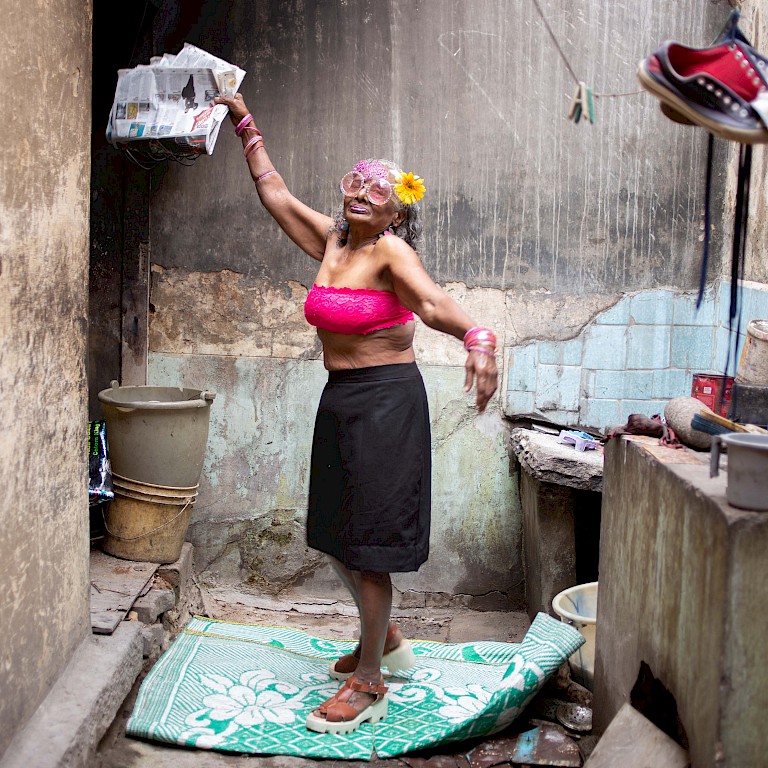 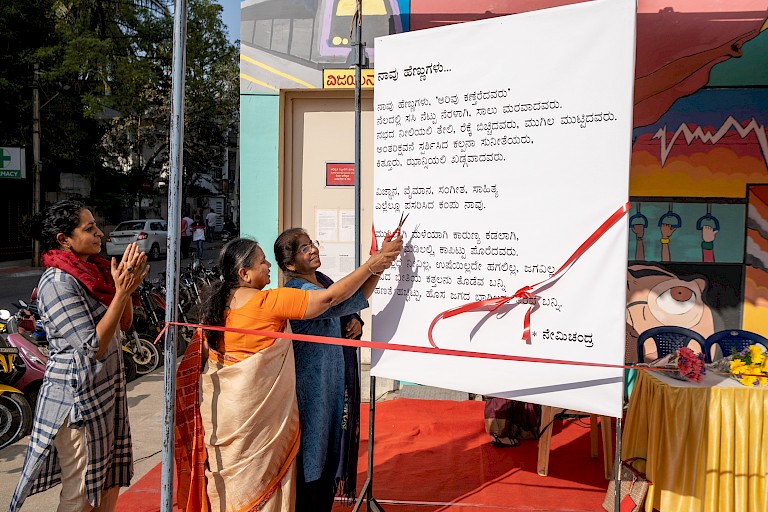 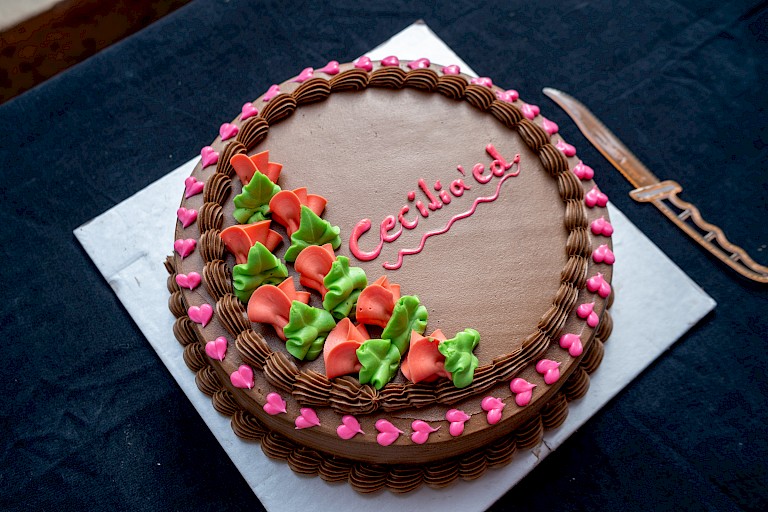 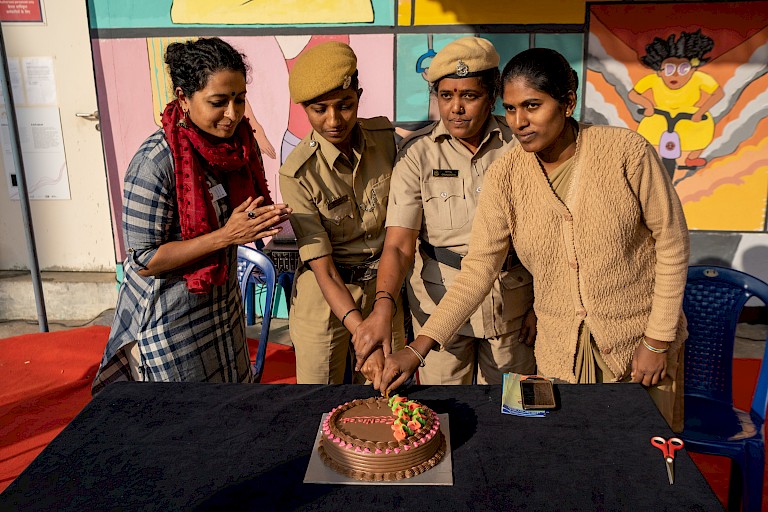 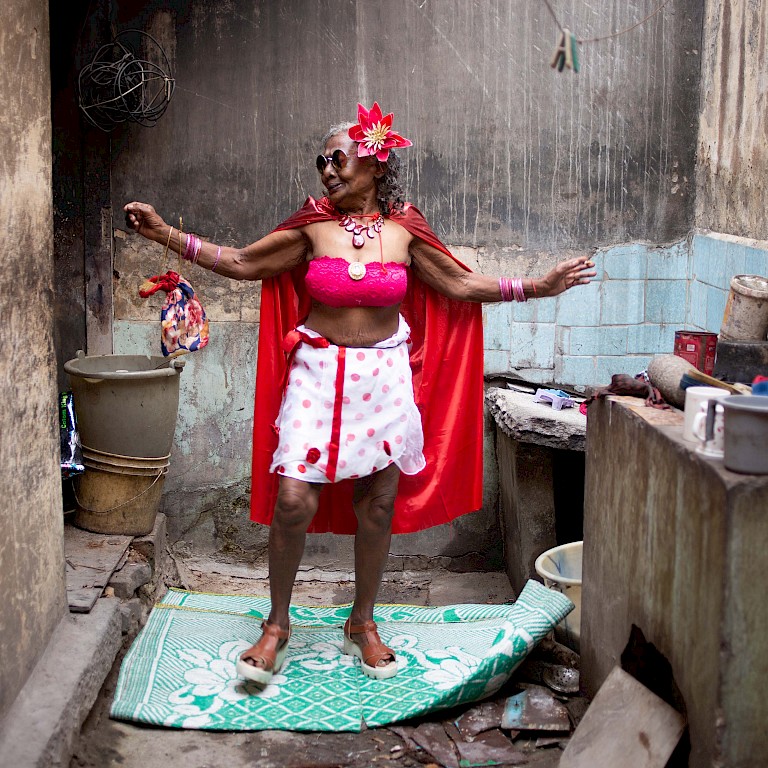 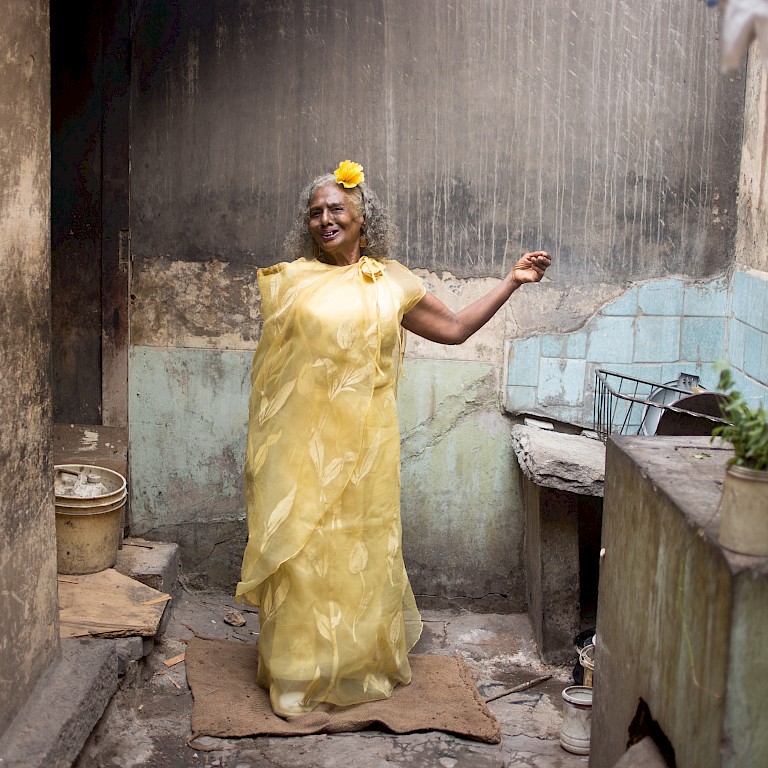 Indu conducted various outreach programmes- monthly Women’s safety workshops in the local anganwadi (a government centre to provide free education and food for kids under 3 years and nutrition for pregnant women). Indu attended the local BBMP ward meetings every month. She created Whatsapp groups in the community to reach out. There was a news channel style video created to share and play in local barber shops & bars. She circulated pamphlets in the local newspapers. Indu also visited various schools, yoga centres and presented the project. Every aspect of the project’s materials (shaman, tea, cake, stationary, flowers, dress for Cecilia, photo and video etc) were acquired from the people in the area.

The project helps to look at Public Art beyond the tangible but more of a reformation in the society- Art as a Social Action. It is how to look at Art as a social medium. The permanent aspect of the project is the Mural created to Cecilia.

The project was done in a pilot format so that it could be replicated in any part of the world. Sexual harassment is not an issue faced only in India. A recent case of rape and death of Sarah Everard in London caused a lot of protests and made us all aware how unsafe it can be. It is a project that moves beyond reaction and understanding the idea of ‘the local’, from language to involvement of people in a certain area. The project focuses on ward no 24 (a single ward) among the 198 wards in Bangalore. One of the street re openings were done in a metro station away from ward 24 to have conversation about harassment in public transport systems.

During each reopening the artist would get multiple reactions. In once such incidence, an elderly man asked ‘My daughter was harassed in the bus and she has not left her room in two years. Can you help her?’ A lot of the men would say ‘We didn’t know there were issues like this’. Some of the women would ask ‘Why should women step out?’ The women who attended the women’s workshop continue to meet. Indu was once stopped on the road and threatened saying ‘Because of you my wife talks back’. But she believes that change cannot happen overnight. Indu feels a group and collective feeling emerged from these meetings and reopening.

Cecilia lives in a tiny house and the land sharks have been trying to get hold of her house. They have poisoned her cats and dogs. But after the project they do not bother her as now she has become famous! She said her life has changed after the project. People stop their cars to get selfies with her as she cycles to church. A proof of how the celebrity culture worked.