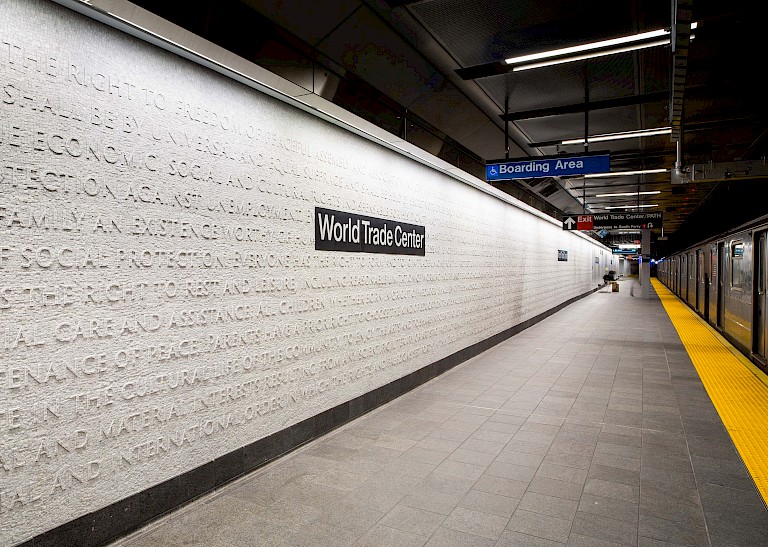 Ann Hamilton’s text-based mosaic CHORUS lines the walls of the World Trade Center (WTC) Cortlandt subway station in New York City, which serves the former site of the twin towers destroyed on September 11, 2001. Commissioned by MTA Arts and Design and opened to the public in September 2018, this permanent monochrome artwork features raised text in white marble within an expanse of white marble mosaic. Excerpts from the United Nations Declaration of Human Rights (1948) run horizontally, intersecting at the occurrence of shared words with excerpts from the preamble to the United States Declaration of Independence (1776), which form vertical spines within the design. The artwork invites a tactile, personal relationship with the aspirational ideals of these foundational documents and the opportunity to consider how the larger civil society might strive toward these ideals. The repetition of key words constitutes a refrain, a CHORUS, composed and recomposed in its order and repetition by each passerby.

Ann Hamilton’s CHORUS serves as a threshold for the former site of the World Trade Center Towers. On September 11, 2001, the towers that formerly anchored lower Manhattan’s financial district were destroyed in a terrorist attack that ultimately took the lives of nearly 3,000 people, injuring thousands more. The impact rippled outward from the site. Both 110-story skyscrapers collapsed, starting fires in adjacent buildings and spreading dust and debris across the surrounding area. Rebuilding—emotionally and physically—has been a long road.

Over the two decades since 9/11, the site has been transformed. A memorial opened to the public on September 11, 2011. In 2014, a museum opened, as well as One World Trade Center, a skyscraper matching the height of the original towers. In 2016, The World Trade Center Transportation Hub and Oculus, designed by Santiago Calatrava, opened along with retail spaces. Hamilton’s CHORUS and the WTC Cortlandt subway station where it is installed, opened in September 2018.

In approaching this location, Hamilton was aware of the emotional and historical weight of the project, as well as the need to create a work that would offer a meaningful entry point for visitors traveling to the memorial, along with local residents and commuters who might engage with the work on an almost daily basis.

Drawing on an extensive career working with text and cloth, Hamilton developed a concept responding to the space and the questions it raised. Speaking to the influence of her background in textiles, she alluded to “the structuring properties of textiles having a democratic spirit,” explaining that, “Every knitted loop and every thread must do its part for the cloth to hold.” The intersections and strength of warp and weft, of national and international documents, create the structure of CHORUS. Here, words replace threads to form a conceptual and text-based foundation for civic life, one continuously made anew.

While conducting research into source texts, Hamilton was drawn to the negotiations, diplomacy, and ultimate complex agreement underlying the ratification of the United Nations Universal Declaration of Human Rights (1948). Phrases from this document became the horizontal text that flows along both sides of the subway platform, structured by key phrases from the preamble to the United States Declaration of Independence (1776), which form periodic vertical spines. On the Southbound side, these spines both bring the eye to key phrases, such as “with certain inalienable rights,” and “these are life, liberty, and the pursuit of happiness” as well as repeated words. On the Northbound platform, the word “everyone” recurs from ceiling to floor, foregrounding the expansive significance of rights such as freedom of thought, peaceful assembly, and freedom of movement. Hamilton wrote, “In the repetition, a chorus, and a refrain sounds: everyone, equal, rights…These underground crossings of texts and people are the social, legal and institutional pillars that underlay cultural life above ground." 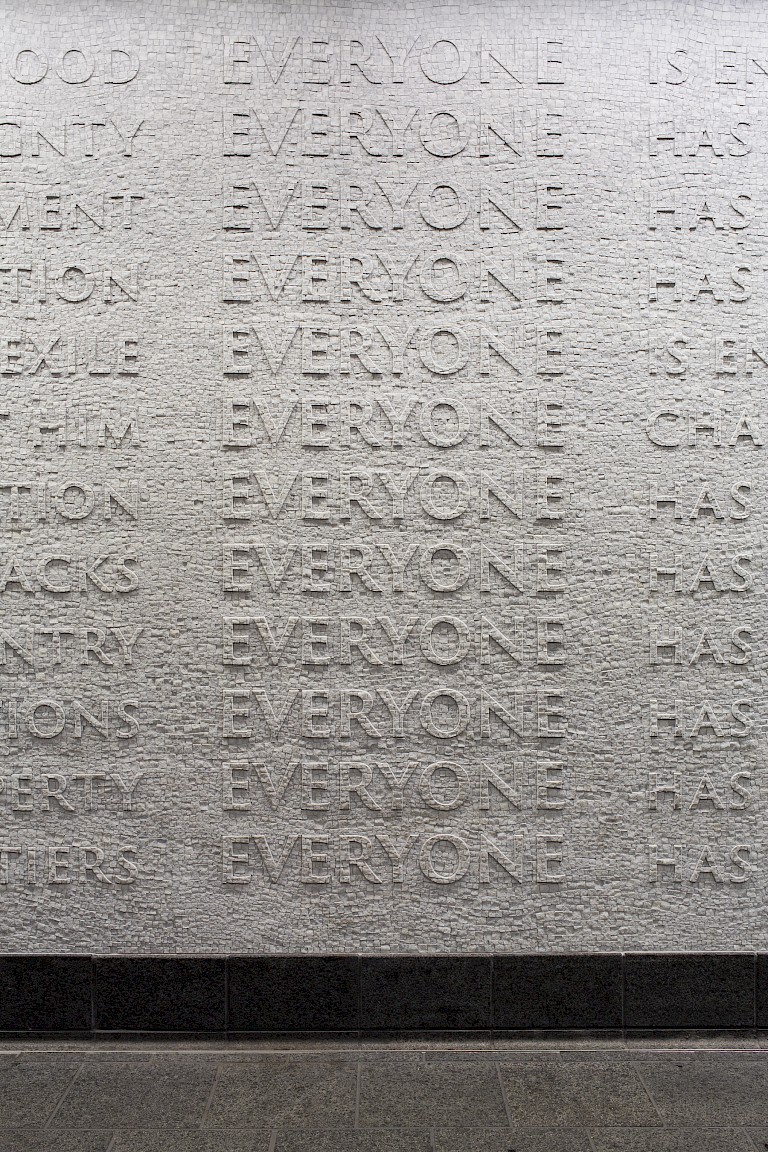 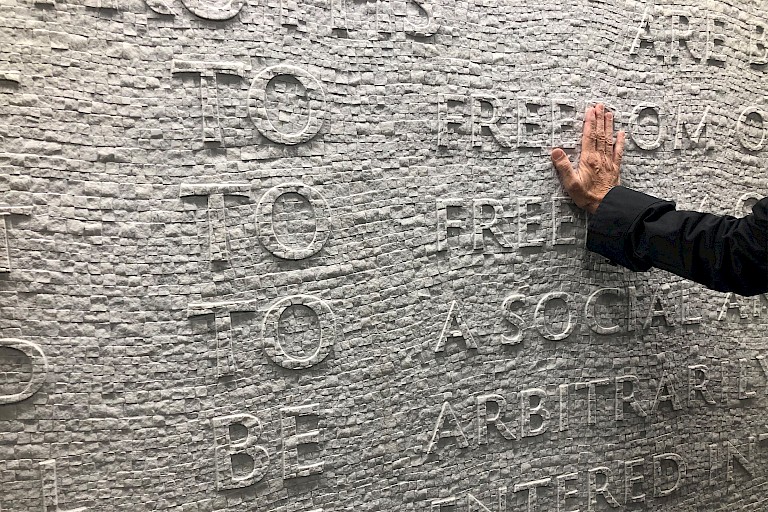 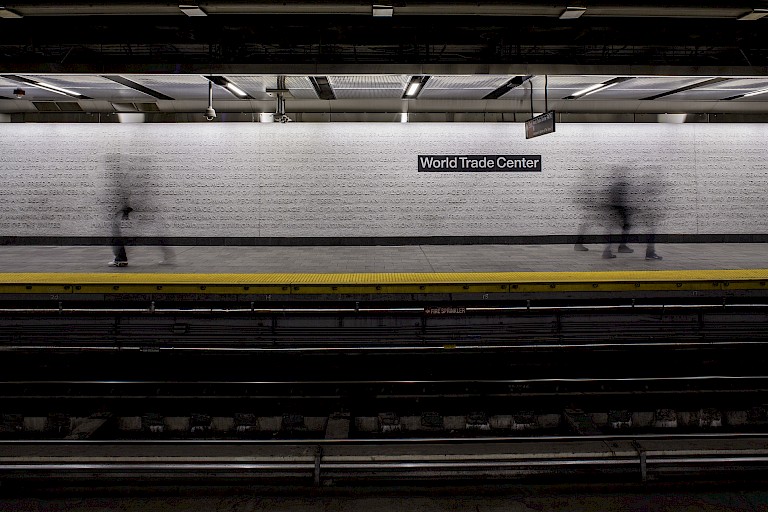