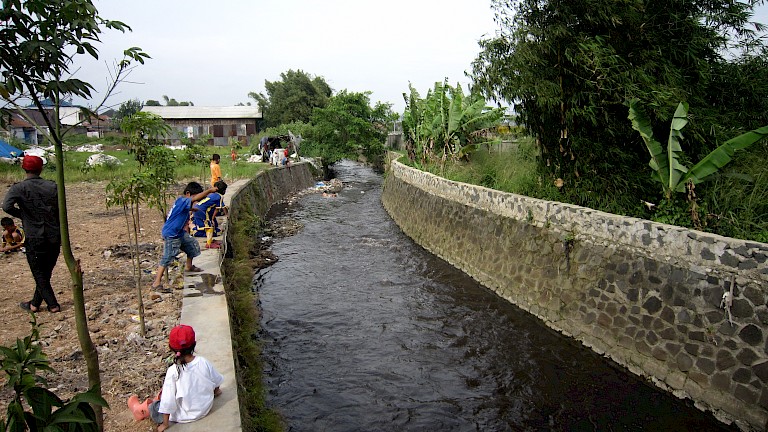 Cigondewah is an area situated at South Bandung, Indonesia and it is known as one of central district of textile industry. However as an industrial area it does not instantly creates the area to become economically prosperous. It is rather becoming a waste land with number of environmental issues plague of flooding during rainy season, an over flow garbage and pollution of soil and water. On its heyday, Cigondewah was a paddy field area that was well known by its rice product “Hawara Geulis”; which means beautiful air. Reflected by the products’ name, Cigondewah was used to be unpolluted and it was one of the significant area or rice supplier for Bandung area. During the 90s Cigondewah started to switched function into a textile industry area. The idea of modernisation was not anticipated well by government policy in prosecute and implement the rules and regulations. As a result there has been a changes in village governance system that has diminished the local and traditional culture of rice harvest which surrounded by a warmth neighbourliness, togetherness, along with mutual cooperation culture. It was a consequence of industrialisation that Cigondewah has become a polluted area which cause environmental problems and damage in local geniuses, cultural tradition and mental attitude among the villagers.

During his childhood in Cigondewah, the artist Tisna Sanjaya had experience the unpolluted place with clean air and water as the source of living in Cigondewah. Hence as an artist, he began to questions whether art can inspired and act as a solution for the better changes in the society particularly in Cigondewah. 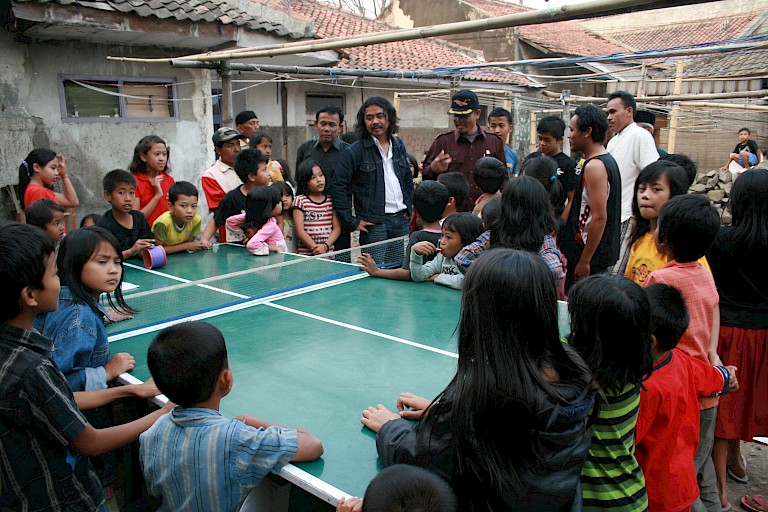 In 2007, Tisna Sanjaya started create an artwork that took place directly in the industrial waste area at village Batu Rengat; with his objectives in revitalising culture and community empowerment in order to regain the spirit and value of local geniuses and mutual cooperation among the community. Therefore in the plot of land that he bought as a barter with his artworks; he built Cigondewah Cultural Centre as a place to create various public event such as planting trees, workshops, discussions, performance art, martial art, pigeon races, kite flying and soccer games. Cigondewah Cultural Centre is also act as the studio of creation for public activities, education and also as a collaboration space that involves artists, local residents, new comers, businessman and authorities. Tisna had also used different types of engagement media to communicate with community, he created a TV programme and act as a local figure “Kabayan”. This attempt is one of his strategy to communicate his thinking and criticism to the community and authority. Through his observation, Tisna aware that villagers within the border area has political, economic, social and cultural problems due to lack of management system that leads to pragmatically attitude of the people in Cigondewah. With the dominancy of certain authority and their conspiracy act, people with lack of knowledge such as Cigondewah community were an easy target to be manipulated. Within seven years, the various public event has helped Tisna to identify the core problem of the society which is the mental attitude; and to change the whole neighbourhood thoroughly, Tisna has experimented and mapped the strategy that need a well-structured organisation and strategic communication to approach different elements that has power and control over the area which is the government and factories at Cigondewah.

Cigondewah Cultural Centre is not just functioned to serve the community with its’ activity, but rather as an artwork that contain a complex system in terms of engagement with its’ surrounding. The site was formerly used as a waste land as well as polluted and arid; but Tisna changed that into a green site with a building in the centre in order to rejuvenate the site. Tisna also complement the site with cultural and public event programme in order to regain the spirit of cultural and traditional value that has damaged due to industrialisation in Cigondewah. With Cigondewah Cultural Centre Tisna attempt to raise awareness on how to adopt and to adapt sustainable modes of urban living; and once the awareness has created then the critical public can be formed. Tisna was also aware that it is not an instant process to reach that level of awareness; as previously he has dealt with Babakan Siliwangi project and it took 12 years to achieve the project’s aim in safeguarding the forest area from becoming a commercial area inside Bandung city. Within 7 years of process Tisna was focusing on the observation within Cigondewah in order to grasp the cultural intuition, understanding the character and artwork creation. It is thorugh observation that now Tisna has begun to planning his further strategy in creating a well-structured organisation with systematic strategy such as providing a clean water supply for the whole village at Cigondewah Cultural Centre; while beginning to approach the in control authorities to start implementing the government policy and regulation especially in controlling factory waste to the river and providing public area for children’s activity.

In 2007, Tisna Sanjaya was decided to purchase a plot of land in Cigondewah, Southwest Bandung. It is an area where he was grew up, since his childhood the area has witnessed dramatic changes, the activity of the freedom of using communal spaces today have nearly dissapeared from the urban spaces. Therefore he set up a cultural centre above the waste land and incineration waste. The economic situation was not well managed by the local governement and the factory owners are not being considerate and responsible in building the factories around Cigondewah. The paddy field has changed, the river has contaminated by the factory waste and the water has become filthy and poisonous. The public area such as children playground are no longer exist. To make an effort in changing the area, he purchase the land by trading his painting to the collector. While he built the cultural centre, the curator and director of NUS Museum, Singapore pay interest in following the making process of the cultural centre. Although NUS Museum were following the process, but all the funding came from Tisna Sanjaya graphic artwork. Until today he fund all the maintenance and activities of Cigondewah Cultural Centre with his graphic artwork. However after Cigondewah Cultural Centre was built, Tisna Sanjaya were having an exhibition at NUS Museum, Singapore and he brought all of the waste from Cigondewah and created an installation room full of waste and all of exhibition’s fund came from NUS Museum, Singapore. During the process there were students from different disciplinary came to follow the process or conducting research based on their background.