In front of the Children's Museum of Pittsburgh, Pennsylvania, Cloud Arbor is a 20-foot diameter sphere of fog that forms inside a forest of stainless steel poles. The sculpture functions year round and creates a cloud that appears and vanishes every few minutes from 30-foot tall poles that convert water into fog through high-pressure valves. The project was a collaboration between artist Ned Kahn with landscape architect Andrea Cochran and the Pittsburgh Children’s Museum.

Kahn’s work, like Cloud Arbor, integrates the forces of nature in urban and formal exhibition contexts. The interactive nature and precision of the piece display a deep understanding of the scientific, biological, and engineering of natural systems. Depending on the climatic conditions of the site, the fog may descend upon visitors or hover above the park in a sphere. Children and adults alike interact with the sculpture whether in a bathing suit on a hot summer day, or as a refreshing mist on their lunch break. 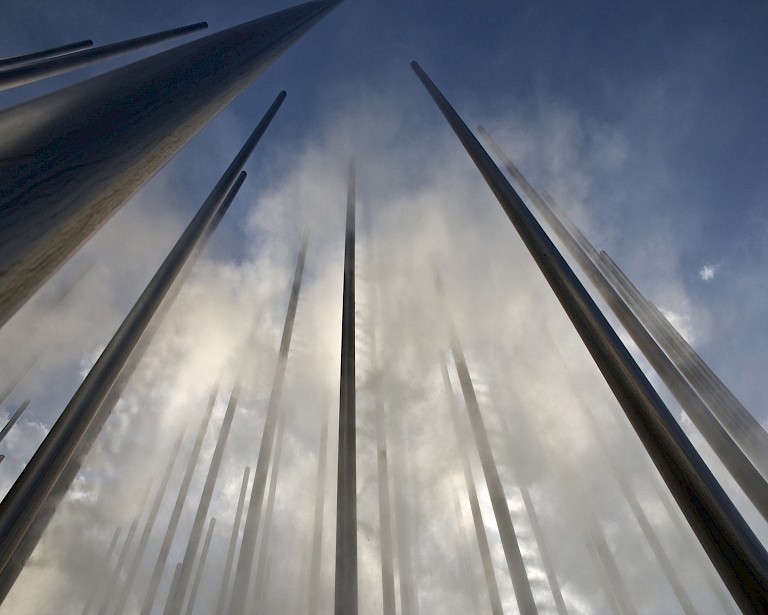 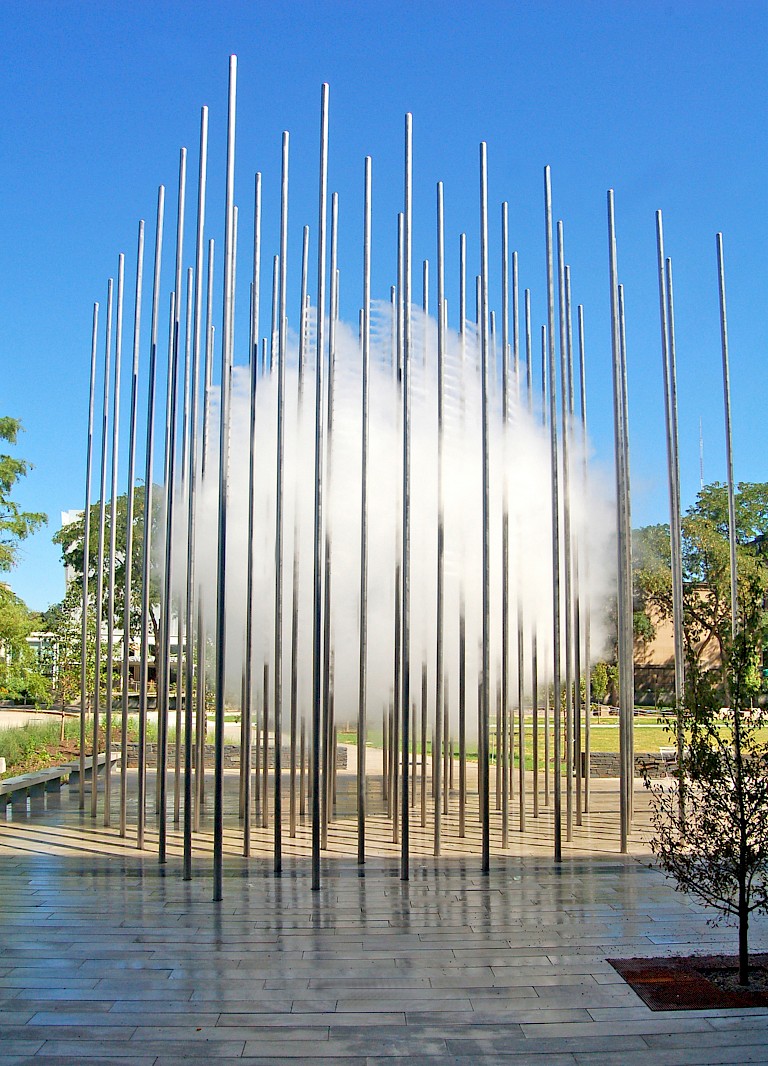 Kahn worked closely with landscape architect Andrea Cochran to develop the site-specific installation, fully integrated into the park, and a foundation of the park’s identity. During the design process, the community around the park came forward to advocate that the park be redeveloped as a civic space, not just a public extension of the Children’s Museum. The project partners were deeply inspired by community input during the sculpture and park design process and developed a place that is delightful and accessible to all ages.

The sculpture is a beacon for how public art and design can work hand-in-hand to create great public space. According to Andrea Cochran, the poles are spaced at four-foot intervals to encourage visitors to move through the sculpture and to create a sense of permeability with the rest of the park. In addition, the sculpture is sited along one of the park’s major, cross-axial pathways, aligning it with the entrances to both the Children’s Museum and the office building on the south side of the site. A pedestal system allows water to drain through the pavers without ponding and creates a void below grade to house the electrical conduit and water lines that run to the sculpture. The artist and designer worked with lighting designers to create a custom in-grade light support within this subsurface zone, integrating the fixture layout into the grid of poles and pavers, creating a public space that is not only enjoyable throughout the year, but also at different times of day. To provide for the long-term sustainability of the renovated park and its artwork, the Children’s Museum and the City of Pittsburgh share the responsibilities of maintaining, repairing, and protecting the park. The Children’s Museum has also created an endowment to help pay for the upkeep of Cloud Arbor. Due to its use of water as a scientific and artistic wonder, ongoing maintenance of the nozzles and the fountain is critical to the long-term success of the installation. This endowment and the park redesign are considered gifts to the city by the museum.

The sculpture is a great example of how public art can anchor civic park space. Cloud Arbor is the focal point of Buhl Community Park, a revitalized community gathering space for Pittsburgh's Northside. In 2012, the Children’s Museum led an effort to transform the neglected city park that was largely blighted and unused into a vibrant green space for the neighborhood.