Countdown Machine began as a segment embedded in the animation work “Our 60-second friend begins now” (9’30”, viewable online). According to the artists, the work was inspired by the film Days of Being Wild (1990) directed by Wong Kar-wai. In the film, the main male character played by Leslie Cheung asked the main female character played by Maggie Cheung to gaze at the watch for one minute together. He then referred to this as a “one-minute friendship”, as if the one minute became eternal. The artist statement said that the work was intended to invite viewers to “celebrate the key cinematic moment” by standing next to a person who might be known or a stranger, and “reenact the ephemeral possibility of a one-minute friendship.” The animation primarily presents English and Chinese texts and numbers in upward and downward movements. It also presents the idea of time in various ways, eg. as a numberless clock face with one hand, as Chinese characters that referred to the ancient system of naming years by the cycle of 60, etc. At around eight minutes into the animation, The Countdown Machine segment appeared, counting down in seconds towards the year 2047. It lasted about one minute, as each of the other five segments did.

The work was originally commissioned by the Hong Kong Arts Development Council (thereafter HKADC) for the 5th Large-Scale Public Media art Exhibition: Human Vibrations”, curated by independent curator Caroline Ha Thuc, to be shown on the facade of the tallest building in Hong Kong, the 108-storey ICC. The artists had the work installed on May 17th 2016, one day before the opening of the exhibition. On May 22, the presenter HKADC issued a joint statement with Ellen Pau, Chairman of Film and Media Art Group of HKADC and Caroline Ha Thuc to declare that the work was no longer part of the exhibition because the artists changed the name of the work without consulting the curator, among other reasons. The artists were told the work would be officially taken out on May 22. The website with the artists names could still be found on the internet but inactivated. The official website of the exhibition does not include the artists and their work.

Subsequently, the artists have been presenting The Countdown Machine as a standalone work online (http://addoilteam.hk/countdown/) and in gallery exhibitions with variations. For instance, in the 6th Asian Art Biennale – Negotiating the Future (2017), the audience is invited to email “add oil team” (an artist collective the lead artists in this project are part of) if they would like to receive a “mini Countdown Machine”. According to Wong, “The Countdown Machine” is now a project title that refers to “everything surrounding the piece and the aftermath.” (Facebook private message interview given to research on June 28, 2018.) In the artists’ website, the project was referred to as highlighting the “2047” question, that is, the 50th year since Hong Kong’s sovereignty change to Chinese rule in 1997. The catchphrase describing the turnover had been “no change for 50 years”. Discussion of the idea of Hong Kong and the Hong Konger around the question of 2047 was encouraged. The hashtag #2047hk was coined as a way for all those interested in initiating discussions on the question to upload photos and ideas on social media.

As a contemporary media art project engaging with large-scale urban sites and such popularly used technology as social media, The Countdown Machine is a form of creative activism. It is a nexus through which citizenship in and for Hong Kong could be kept alive in public reasoning for negotiation.

As I am working on this research, I struggle as to whether this project is protest art that articulates one-sided perspectives, and hence limiting the potential of art engaging with politics. I am not fully convinced but am willing to make a case for its artistic excellence as public art. First, in general, while the project had sparked controversies framed by discourses of professionalism and could be perceived by some as hostile towards the government of the People’s Republic of China, the project in itself has not taken any political stance such as the political independence of Hong Kong from the PRC, a perspective it had been systematically suppressing. Instead, the project presents a vision of the public that upholds and values freedom and diversity of expression and its right to imagine its future. Second, one might question its place-making power.

The Countdown Machine began as a spectacular work in a gigantic commercial building. In an arguably counter-monumental gesture of challenging what the building symbolizes – prosperity of the city via the circulation of capital that is unevenly distributed, is The Countdown Machine also turning itself into another icon that is out of reach for ways of life on the ground? The occupation as temporary and symbolic could be seen as corroborating with the same kind of abstraction capital has being imposing onto the city. But it seems resolution could be found in the way the project presents the idea of time as fluid, poetic, and embodying the potential of change. At the same time, the project conjures a sense of urgency on an open-ended topic – the future of Hong Kong – which presents time as concretely lived life-times for each individual and shared among them. Challenging the well circulated image of the Victoria Harbor skyline, the project reveals the undercurrents behind images of prosperity (particularly acute since the Umbrella Movement that sought universal suffrage, and failed). If the idea of ’50 years’ since the sovereignty changeover had been arbitrarily and artificially imposed as a rule of administration for the Hong Kong ‘special administration region’ (‘HKSAR’), the project turns the abstraction around and makes lived time an immediate publicly shared experience. Third, one might question how the project employs the same tactic of counting down that the Beijing administration used for the “Hong Kong Clock” installed in Tiananmen Square.

In “The Hong Kong Clock – Public Time-Telling and Political Time/ Space”, art historian Wu Hung says the “Hong Kong Clock” provides the days and seconds (but not hours and minutes) left before July 1, 1997. Its 30-foot-high face bore a written message, “The Chinese Government Resumes Exercise of Sovereignty over Hong Kong” (in the journal Public Culture, Vol. 9, No. 3, Spring 1997). Wu says the clock “sharply demarcates Hong Kong’s two alternative identities either as ‘a foreign colony’ or as ‘an integral part of the socialist motherland,’ and denies it a third identity.” (p.354) It echoes with David Harvey’s idea that the “reduction of regional identity […] ‘entails the conquest of space […] and the ultimate ‘annihilation of space through time.’” (cited in Wu, ibid.) On the contrary, The Countdown Machine carves out precisely a third space for and challenging issues for the public to be engaged with, resisting the conquest. Lastly, the project cleverly makes the work a ‘machine’. It is the imagination of the senseless and rigid movements of the machine, as in state apparatuses of rule, that alerts humans to re-engage with our humanity – the machine can keep ticking, but we could also activate their capacity for reasoning for the common good despite the apathy of the machine. In all, the project is exemplary in showing how public art is an essential part of public life.

The Countdown Machine is one of the several projects by the art and culture collective “add oil team” and its development could be understood in relation to the group’s work. In Cantonese, “add oil” is often used to encourage others to not falter in difficult circumstances. The group created Stand by you: add oil machine for the Umbrella Movement in 2014. Anyone could send a message and the machine would display it on the screen. The machine projected the messages on government buildings during the movement. It officially stopped operating in December 2014. The archive of this work shows 150 pages of 200 messages per page sent by people from various places in the world encouraging the ‘occupiers’ in the Umbrella Movement. The international solidarity activated and the direct actions the work was able to mobilize were picked up by The Countdown Machine, though this time, the scope of the discussion was more open-ended and directed not just at the political demonstration. The Countdown Machine also required more thinking, moral reasoning and choices to be made proactively by participants in engaging with the idea of 2047. However, what remained at the core of both projects were first, the equality of citizens in Hong Kong and beyond to have the capacity to imagine and envision the future and to participate in its making, and second, the occupation of large-scale urban sites to question and re-configure ideas of power and resistance, authority and civic freedom.

As for funding, The Countdown Machine was commissioned with the promised of a lump sum fee of HK$50,000 for the work, but to date, the artists have not received the money, despite being told two months after the work was taken out of the exhibition that they would still be remunerated with the amount.

The context of the project was the Large-Scale Public Media Art Exhibition, in its fifth edition at the time. The curatorial statement emphasizes the ‘human dimension’ in new technologies, and how the artists were able to “formulate new visual languages to deal with [an] increasingly complex reality saturated with signs, norms and data. All of them are searching for a path that would expose us to its human and intangible expression.” (Caroline Ha Thuc, in Human Vibrations website)) This could be regarded as one artistic criterion for selecting the project to be part of the exhibition. 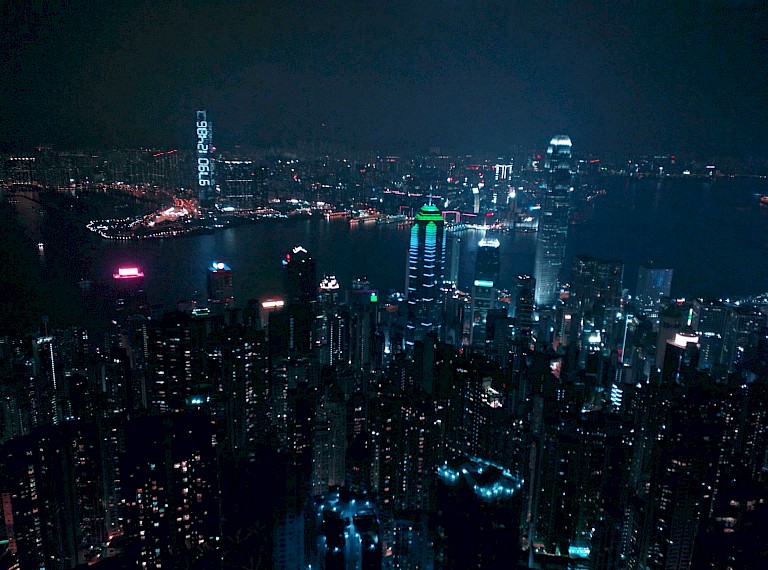 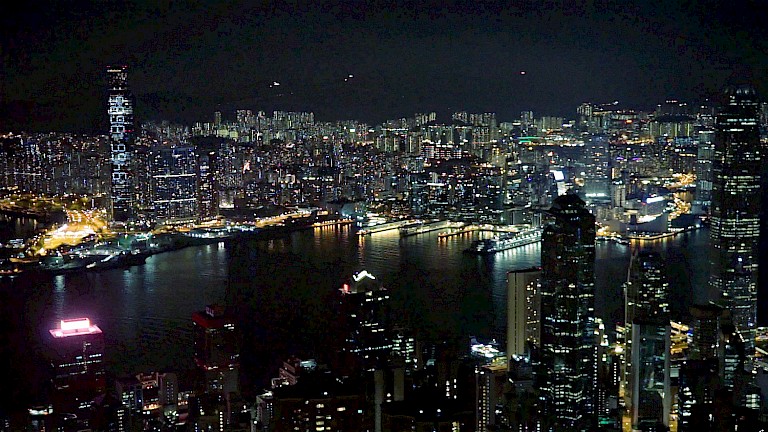 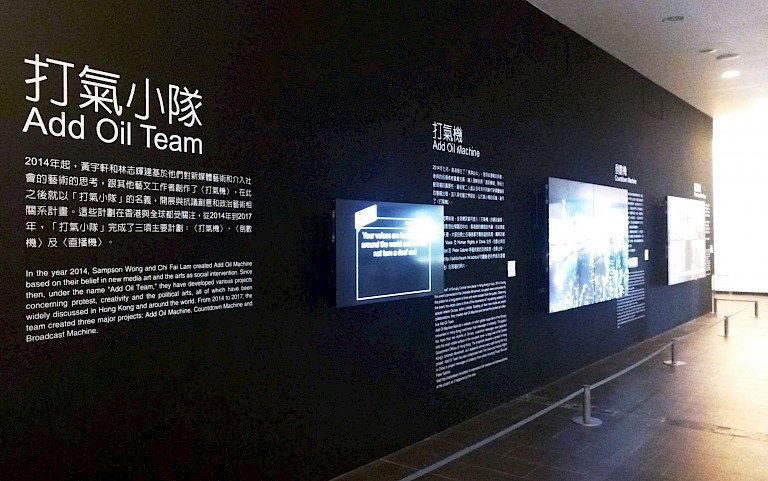 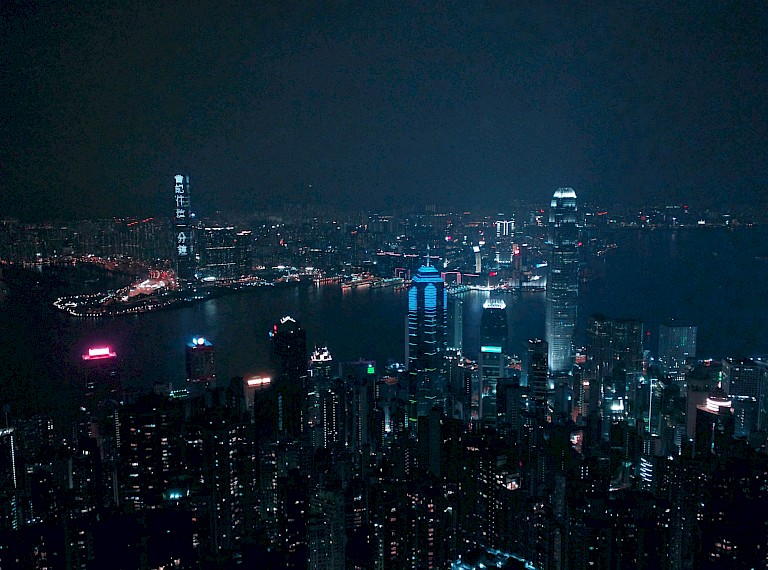