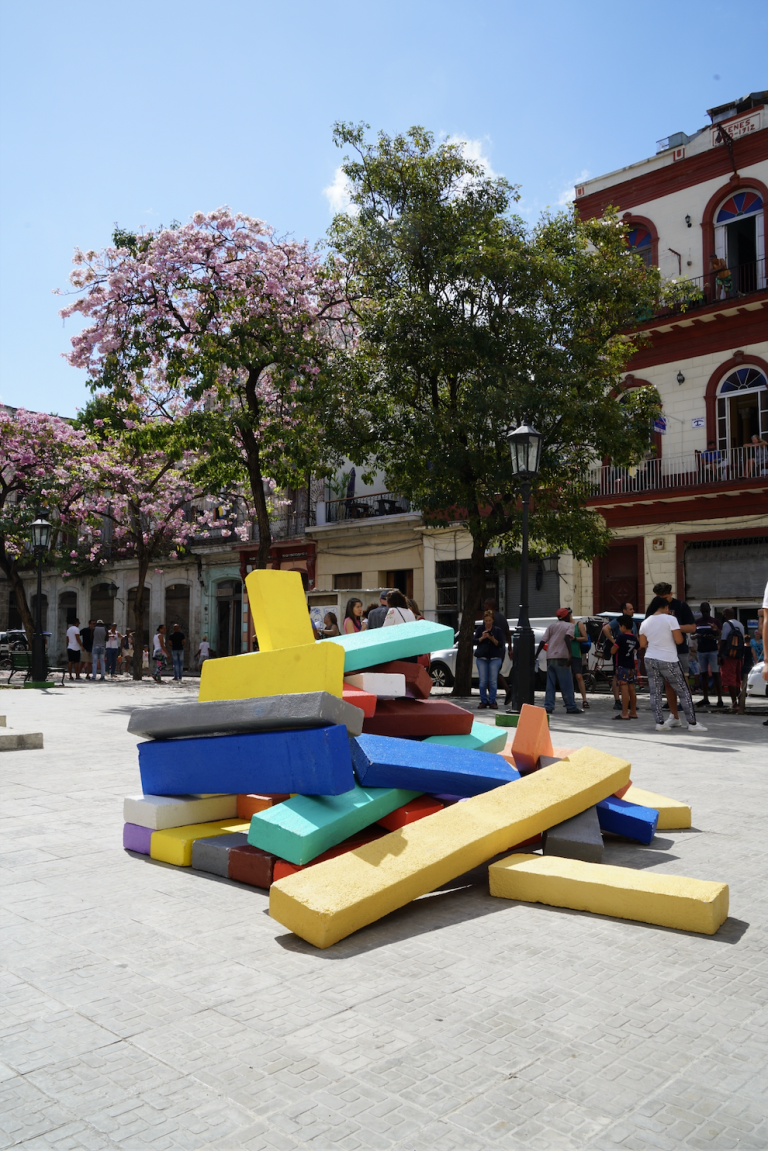 This project invites groups of people to dialogue about the fundamental values of life through the ludic. It is a game created as instrument for the observation of the territory in some of the Cuban provinces with the intention of drawing a new cartography of the cultural actors to conform a geography of transformation, halfway between art, play and social research. Playing (d)estructura shows how individual decisions affect the collective ones and vice versa, the structure grows or decreases, the tension increases by the minute, it is necessary to negotiate collectively what to name, what to add or subtract.

This project was originally made for Havana Cuba, and it has later been performed in different cities such as Istambul and Medellin. 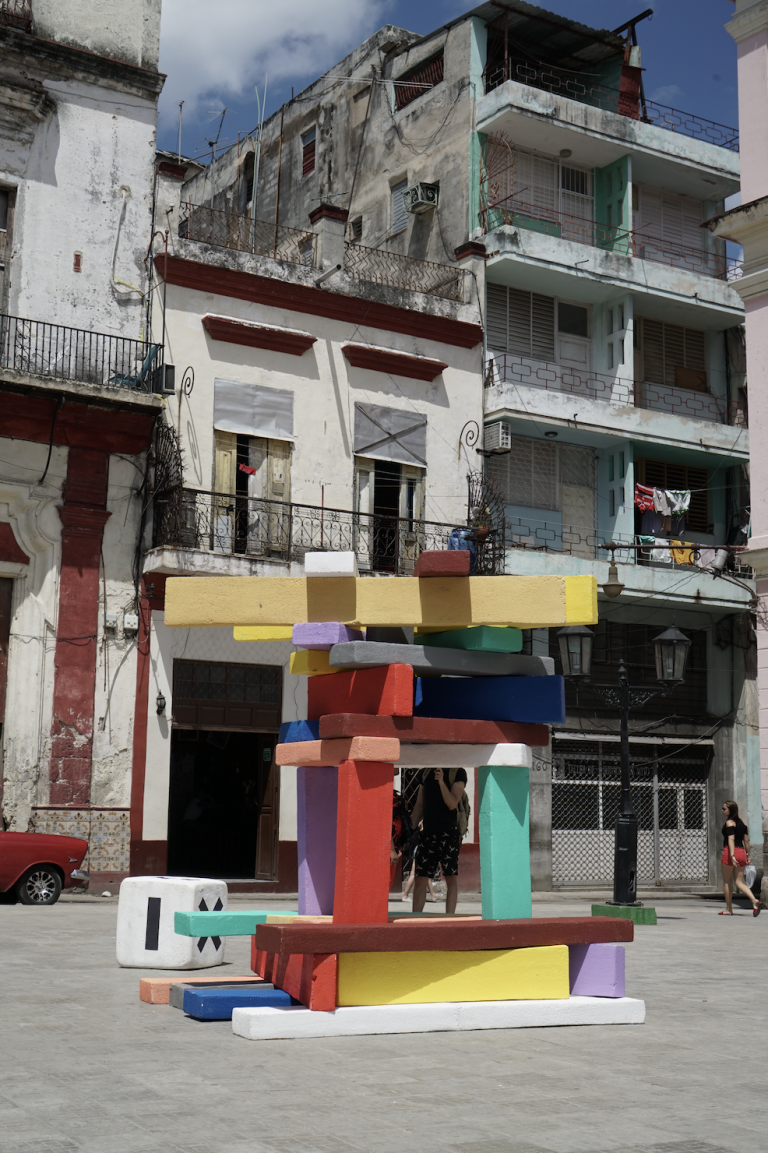 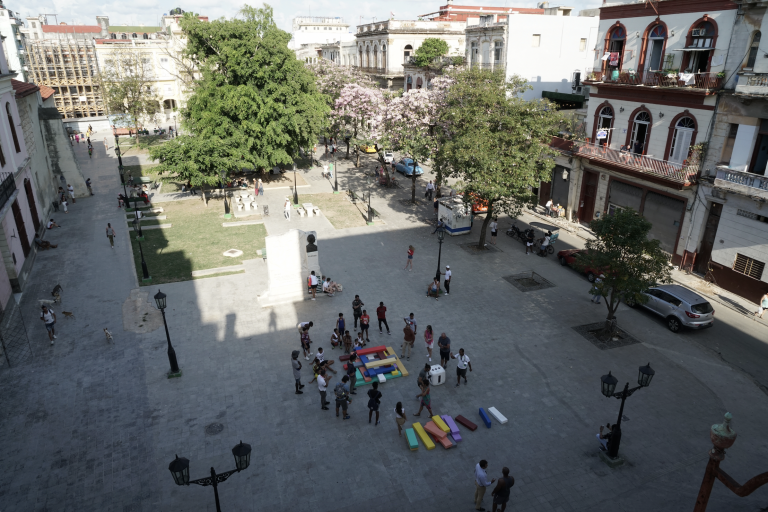 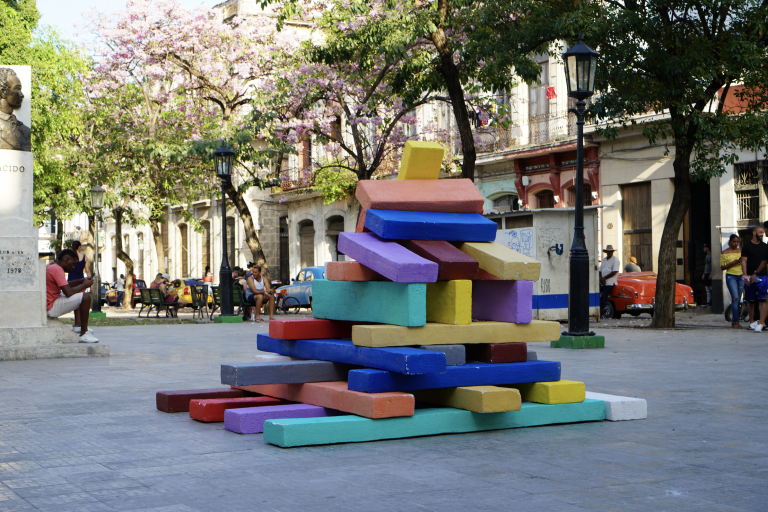 d) estructura is a series of interventions in the public space based on a game with tokens, which invites to think about the future.
This work takes place over a period of three years. During this time, they developed a game that they applied during several trips throughout the island of Cuba. This playful device was used as a tool for interaction with the communities. It is about conceiving a suitable device, object or project aimed at only keeping what is useful to concretely affect the Cuban social context.

The creating process goes back to a long relationship with Cuba by the artists individually, but then they together were invited to participate in an event that was made to reflect upon the Maslow Pyramid. To be able to brainstorm and develop some incipient ideas, the three members of the temporary collective, decided to meet up in Medellin where Alejandro Vásquez resides, Mariangela Aponte came from Cali, Colombia, and Juan Sandoval traveled all the way from Biela, Italy.

The day after Fidel Castro’s death, three Colombian artists begin a journey through out Cuba, from Havana to Santiago de Cuba, with the intention of drawing a cartography of the island’s cultural and social actors, by inviting different groups of people to play with the pieces of (d)estructura. The game begins with the question “How do you see your life in ten years and what do you need to make that happen?” and ends with the realization of a collaborative and participatory structure.

There were thirty game tockens or pieces. Each set comprised thirty of them in ten colors, primary and secondary, each in three lengths. Ten colors and three lengths, for a total of thirty counters. The destiny of the pieces is linked to the six separate faces of the spinning top: remove a piece, substitute one or two of them, add one, two or three counters. At the possibility of removing two, preference is given to adding three, to avoid the game lasting ad infinitum. That is also the reason why the number of participants is between three and six, as more would make it difficult to manage (d)estructura.

It is possible to recognize five distinct phases in (d) estructura: 1) The choice of values: participants choose 10 values or concepts needed to build their imagined future. 2) The assigning of colors: Once the list of values has been established, a specific color needs to be attributed to each value. 3) Building the foundation: It is only at the third phase that the game truly begins. The construction of the base of the structure is a delicate operation, which can take longer than expected, it is also the fruit of an unceasing exchange of dialogue 4) Raising the structure: Once the base of the structure has been terminated and the next levels have moved up, the shape of the base foundation can undergo some retouching, depending on its extension. Of course, the margin for manoeuvre– the possibility to add, remove or substitute pieces – becomes more reduced moving progressively towards the extremities otherwise you risk undermining the stability of the structure. How do you build the structure? There are no precise rules provided and introducing any would mean limiting the multiple morphologies that arise from the very idea of structure. 5) The final passage from vertical to horizontal: A passage carried out with the active collaboration of the artists. In the overturning of the vertical axis to a horizontal axis does the pyramid become a readable diagram, like the façade of a restored building. What do you read and is it made visible?

D)estructura It's a project that relates with different artistic currents with a diverse range of possibilities of circulation and reading. This has two moments of development: The first one that takes place in the game and from it the collective construction of the images and structures happen. The project mixes tools and stances of different artistic currents getting close to operations produced by postminimalism.

The artists appeal to the relational aesthetic starting from the game as a situation of the artwork production, in this the spectators turn into players, activating the experience from the question, how do you imagine your life in 10 years and what do you need to achieve it? a question that displaces the attention focus to the future revealing by a bouncing effect different circumstances of the present life of the participants that are at the same time co-creating agents of the artistic work and not only on lookers or receptors. On the other hand in its public space version (d)estructura picks up postulates by minimalism in relation to the production of objects that establish a dialogue with its material surrounding, but in this case that relationship happens with a social surrounding, not only physical. This relation is directly linked to the central concept that goes through the project, the idea of a structure that appears both in its material dimension as in the political sense of a form of social organization, approaching conceptual art. This mix of elements gives life to a project that from artistic tools and operations produces a space and time where you can imagine collectively, in other words that activates a political dimension of the encounter.

The artistic unfolding of (D)estructura can take many paths depending on where it circulates or is activated, which implies important exercises of production That moderates it's levels of lecture and social appropriation. In this sense you could say that it is some sort of site specific contextual because, though it has been played/realized in different places of the world it is in Cuba where it reaches its greatest potential.