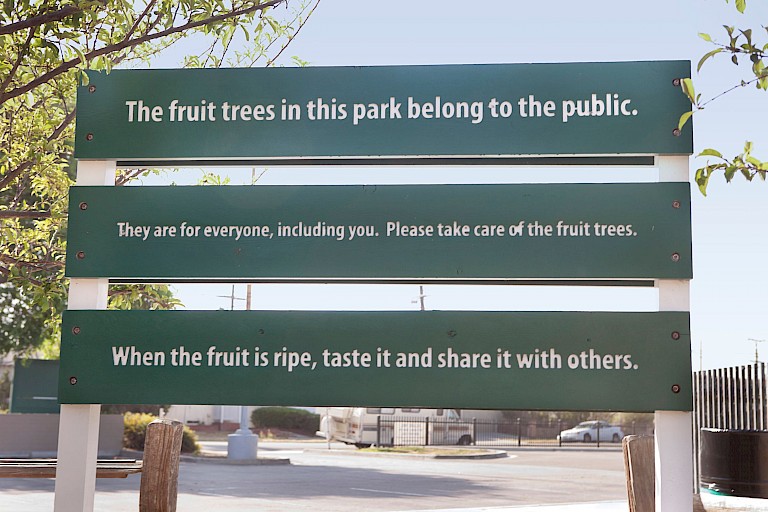 “Is it possible to make something that doesn’t have to go against something else to be righteous?” This driving question resonated for artists David Burns, Austin Young, and Matias Viegener as they collaborated on a response to a 2004 call for proposals by the Journal of Aesthetics and Protest. Centering neutrality and communal benefit led to an exploration of how public space could be used to share resources and to the idea of fruit trees as a common good and symbol of generosity that crosses cultures and classes. Their response to the call for proposals—a map of publicly accessible food resources in their community—set the artists, as the collective Fallen Fruit, on a path that would lead to broader resource mapping, communal plantings, jam-making sessions, video projects, installations, publications, and expansive participatory public art projects. Along the way, their work changed mindsets, policies, and a status quo that had long barred fruit trees from public lands.

Building on a reputation for community engagement established during their early years, the collective was invited by the L.A. County Arts Commission to propose a project for the Del Aire neighborhood of Hawthorne, California. For the chosen site, a public park, Fallen Fruit proposed creating a shared fruit park that would be cultivated and nurtured by the community. Although they were selected for the commission, the collective spent a year in negotiations with city agencies. Many anticipated a standard park project such as a mural or stamped concrete, and were resistant to the concept of fruit trees as a public art installation, perceiving fruit trees to be an “attractive nuisance”—a maintenance burden, a safety and litigation risk, and an invitation to vandals and vermin. In addition to assuaging fears, the collective had to shift perceptions of public art materials. Conversations led to a revision to the county’s understanding of art materials to recognize the fruit trees as living sculpture. Ultimately, it was decided that the Del Aire Public Fruit Park would be a “calculated risk,” a new experiment for the county and a milestone for Fallen Fruit (Owen Driggs).

Following approval, community engagement activities began and included a jam making “fruit jam,” a tree adoption, and communal tree planting days, culminating in the launch of Del Aire Public Fruit Park in 2012. The park features a center of 12 trees, ringed by 24 additional trees spread throughout the park grounds. Beyond the park perimeter, 48 trees were adopted by residents and planted at the edges of their properties, blurring the boundaries between public and private spaces, and encouraging a community of sharing that emanates outward from the park. Today the park is thriving, maintained by residents, and recently revisited by Fallen Fruit members who hosted a pruning workshop for the community. 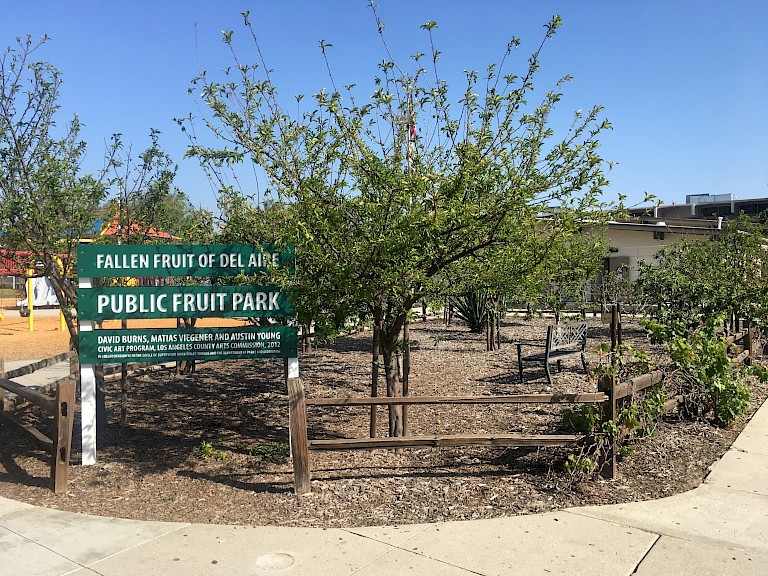 A sign at Del Aire Public Fruit Park reads:
The fruit trees in this park belong to the public.
They are for everyone, including you. Please take care of the fruit trees.
When the fruit is ripe, taste it and share it with others.

Following the completion of Del Aire Public Fruit Park, the Fallen Fruit collective has been continued by artists David Burns and Austin Young, for whom the park served as a key stepping stone. Viewing the project as a success, the county invited Fallen Fruit to propose additional works and the collective has since completed a Monument to Sharing comprised of plantings within a sculptural installation featuring a community-sourced multilingual poem, as well as two sites on Los Angeles’ massive Park-to-Playa project, a pedestrian trail through green spaces and parks that will ultimately lead from the city to the ocean.

In addition to serving as a meaningful public art project in its own right, Del Aire Public Fruit Park functioned as a testing ground that gave L.A. county confidence to further welcome fruit trees on public spaces. Additionally, the project underscores the intertwined nature of public and private realms, as well as the ways in which communities can be reconceived as nourishing spaces. In this vein, it fits alongside initiatives related to healthy and locally sourced food, as well as within an arts and activism landscape that ranges from Guerilla Grafters’ rogue interventions to add fruit bearing branches to public plantings to Fritz Haeg’s Edible Estates, where participants transformed their own front lawns into nutritious gardens.

Fallen Fruit’s name is derived from a stance articulated in Roman law and in a Biblical passage in Leviticus, “When you reap the harvest of your land, you shall not reap all the way to the edges of your field… you shall not pick your vineyard bare, or gather the fallen fruit…you shall leave them for the poor and the stranger” (19:9-10, quoted in Viegener, Burns, and Young). Within this edict, Young noted the implied personal relationship with community, commenting that, “To us, it’s inspiring to think that as people, we should leave some of what we have and part of who we are for others we many never know” (quoted in Dunne).

The fruit trees planted in Del Aire will live there longer than many residents and Fallen Fruit members note that they function as multifaceted subjects/objects within their communities, as David Burns noted: “Nothing in this world happens in isolation or by one person…The fruit trees themselves are landmarks…It becomes a fact and those facts are what allow people to change their minds, and change their relationships not just to the space around them, but to each other in the space around them” (interview with the artist). 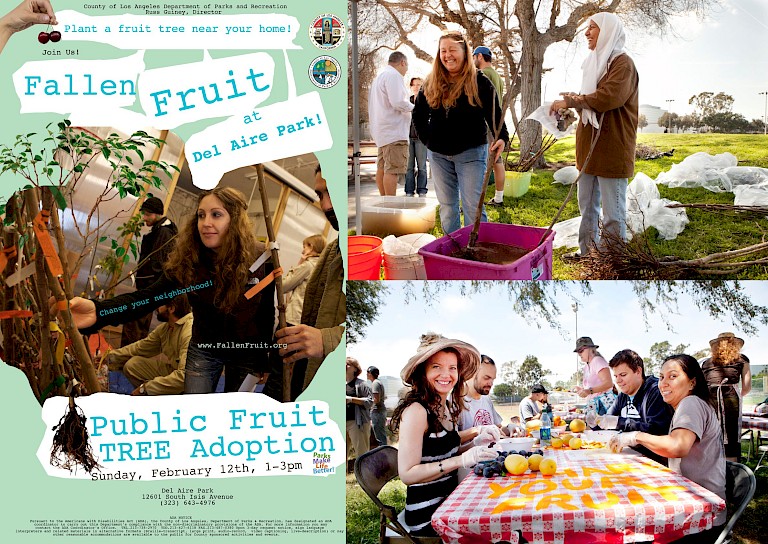 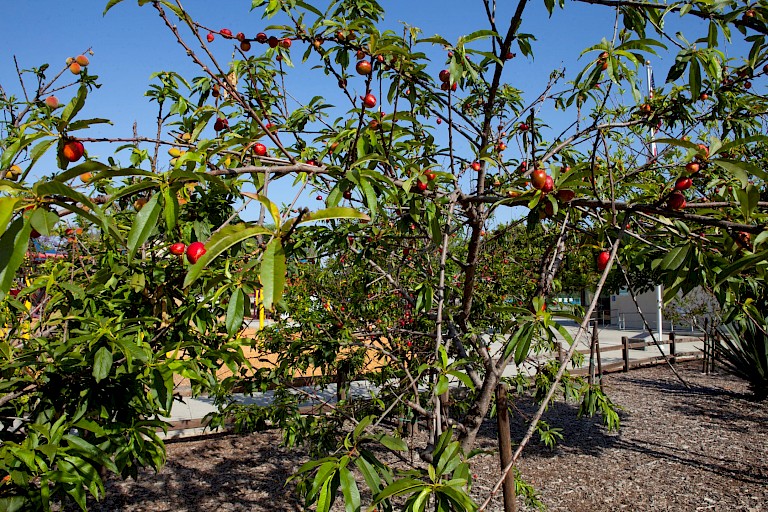 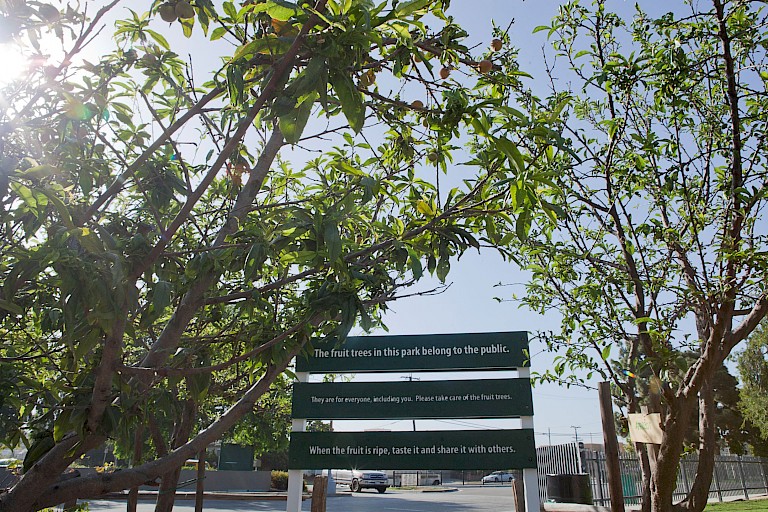 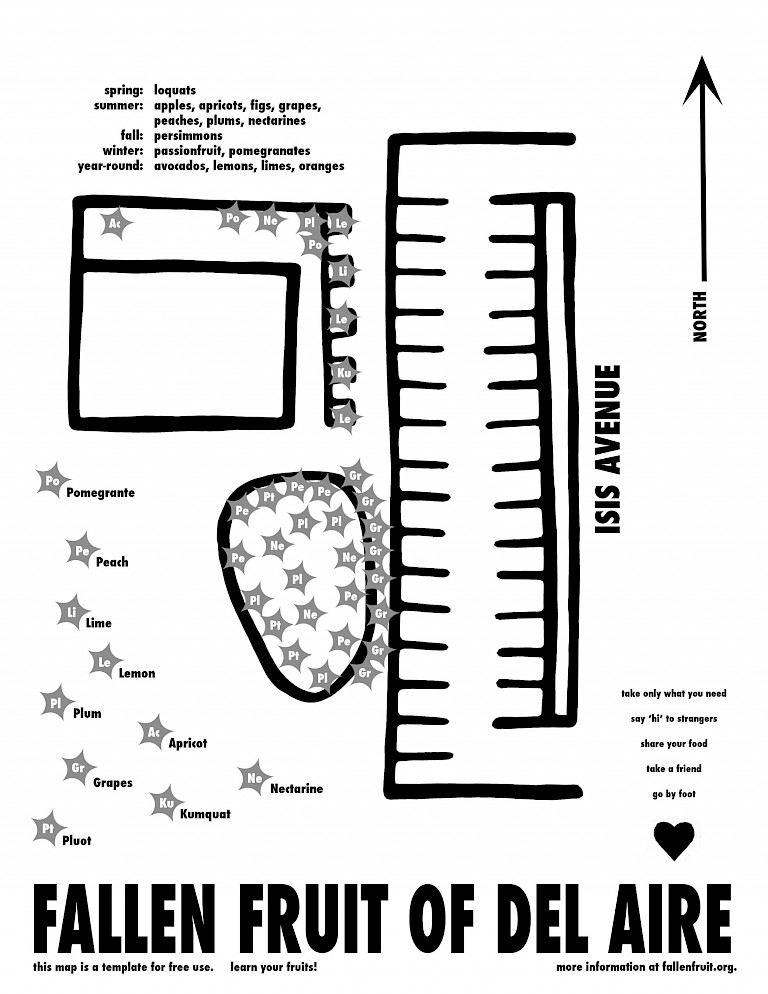 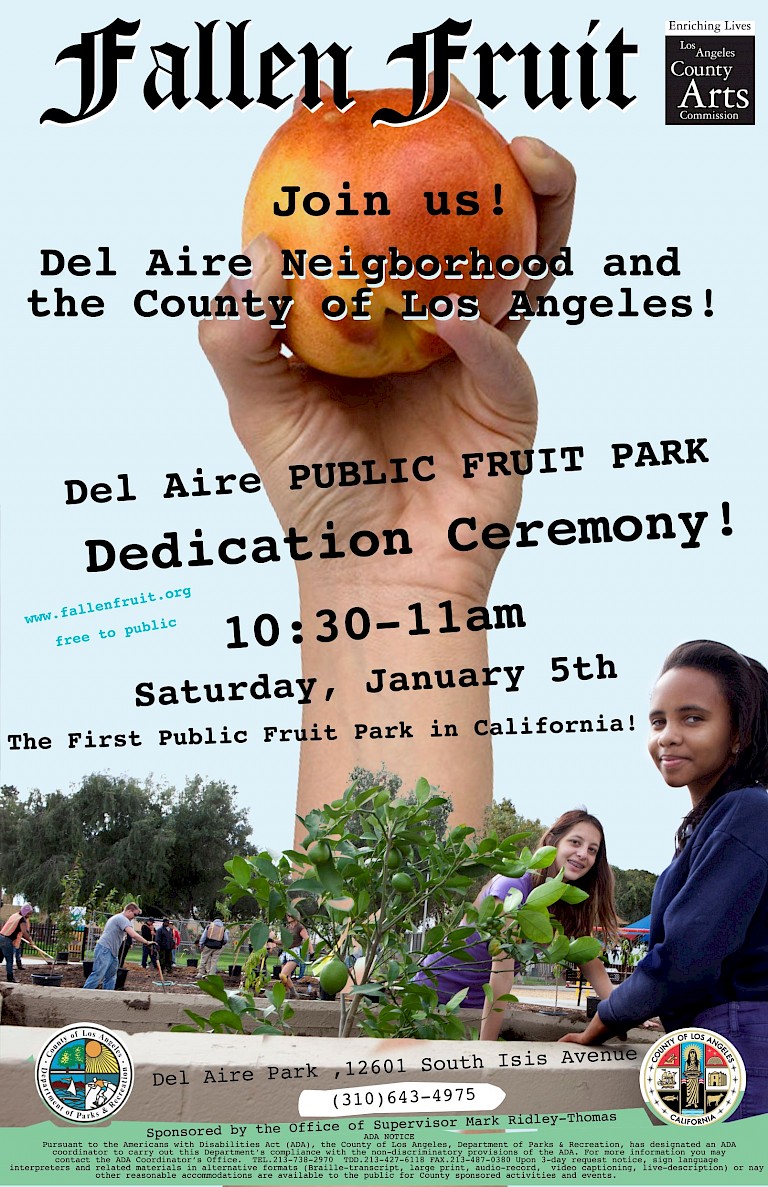