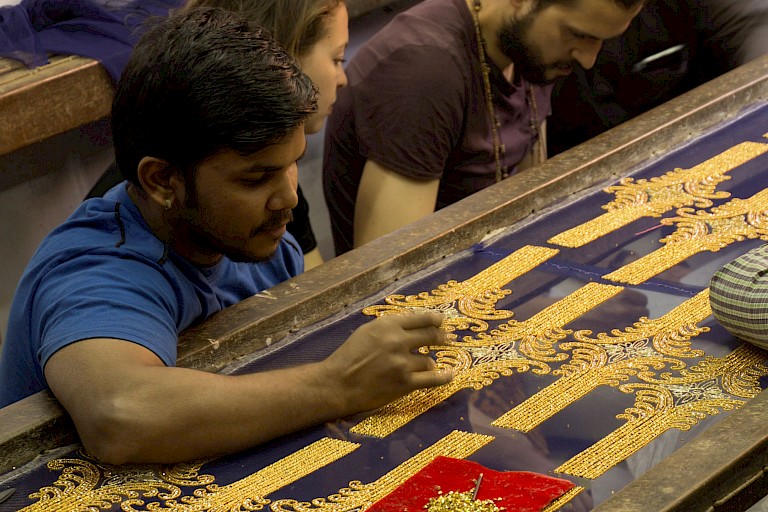 For the longest time Dharavi has been called Asia’s largest slum. This, along with its representation in pop culture and Hollywood – has led to many preconceived notions about Dharavi and its residents. Dharavi, an area of approximately 2 km square, is home to about a million people. Its history is linked intrinsically to the history of Mumbai. The residents of Dharavi were the first migrant workers of the city, working at the great cotton mills of Mumbai, hailing from marginalised or minority communities. These workers were forced to live in slums once the cotton mills began to close down in the early 1980s. Since then, Dharavi has been known for being an impoverished place, full of poor, unwanted, immigrant labour who have always been considered ‘outsiders’ despite being located in the middle of the city. Considered a ‘stain’ on the city, many in Mumbai don’t realise how important Dharavi, it’s recycling centres, its leather industry and many small home industries creating other ‘fast moving consumer goods’ is to the functioning of the city. Additionally, over the past decades, local makers, entrepreneurs and innovators have contributed to turn Dharavi into a story of success and self-improvement. This so-called ‘slum’ has little to do with the kind of apocalyptic imagery sold to the world in blockbuster movies and tabloids. Despite many thriving communities of talented workers who have made Dharavi their home for generations, this neighbourhood is inexplicably still perceived as an eyesore by many Mumbai residents.

The Design Museum Dharavi was initiated by Jorge Rubio, after a prolonged stay in Dharavi showed him a whole new perspective – one that saw Dharavi’s residents as hardworking entrepreneurial and creative people who are constantly striving to improve their standards of living. The people of Dharavi have been working to create a more realistic perception of themselves – as pop culture has shown them as poor and helpless – a view shared by much of Mumbai. This view does not include the myriad small businesses and creative industries that exist in Dharavi, thus creating a narrative of ‘othering’ its residents. Rubio and partner Amanda Pinatih set up the Design Museum Dharavi to bring these people to the forefront. Through the museum, they hoped to establish new links between Dharavi and the rest of the city, promoting a greater exchange through a cultural program that features several workshops and exhibitions. Our mission is to focus on Dharavi’s potential and, through design, showcase it as what it really is: an exciting and promising creative community, full of potential and room for development. The museum has variously exhibited design ideas from makers in Dharavi, including exhibitions that included local pottery (Dharavi is home to a large potter community), broom making, embroidery, carpentry and more. Its last exhibition titled ‘The Waterproof Project’ saw a collaboration with the leather workers of Dharavi (who are famous for recreating some of the latest runway designs in leather), but replacing the leather with the blue tarpaulin spread across homes and shanties of Dharavi to waterproof them.

The project was one of the first few to showcase Dharavi as a settlement of creative and ambitious people - and challenge the widely held views of the residents being impoverished, helpless people who were poor as they lacked ambition. This humanising of Dharavi was key to the recent move to re-integrate Dharavi into the city, and forced the municipal departments to take fresh notes of problems related to connectivity, basics such as clean water and electricity. There is also a significant change in the attitudes of the makers of Dharavi, who have begun to experiment with their products, making them more than just items of daily use.

Dharavi Design Museum came about after artist Jorge Manes Rubio spent an extended time living in Dharavi. With partner Amanda Pinatih, and armed with the expertise of Matias Echanove and Rahul Srivastava of URBZ, an organisation already working with the development of Dharavi, Rubio set out to explore how design could create change within the community and how they saw their own lives. The project is funded by the Creative Industries Fund and by The Art of Impact, both organisations based in The Netherlands, where Rubio and Pinatih are based. 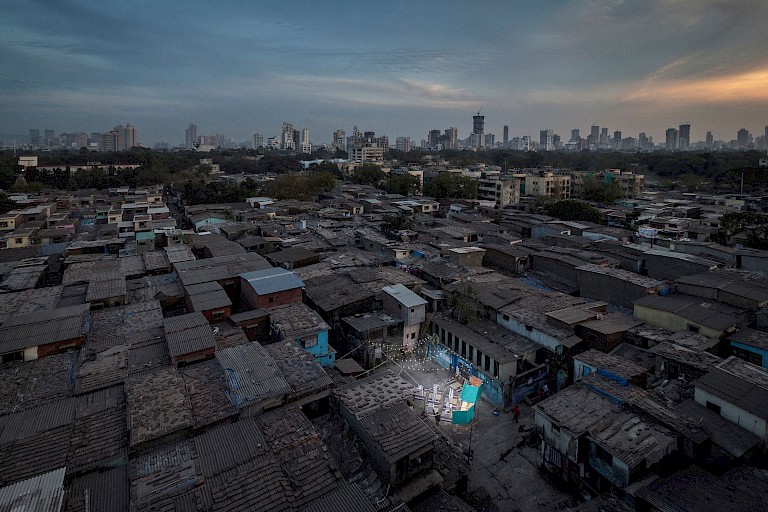 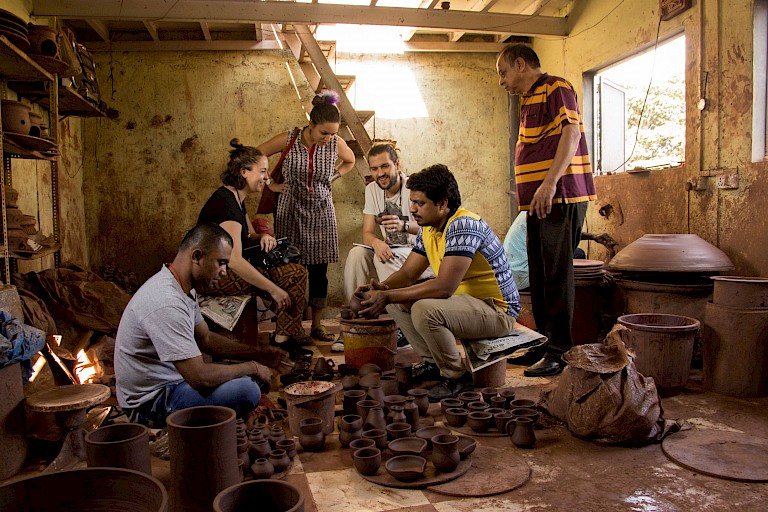 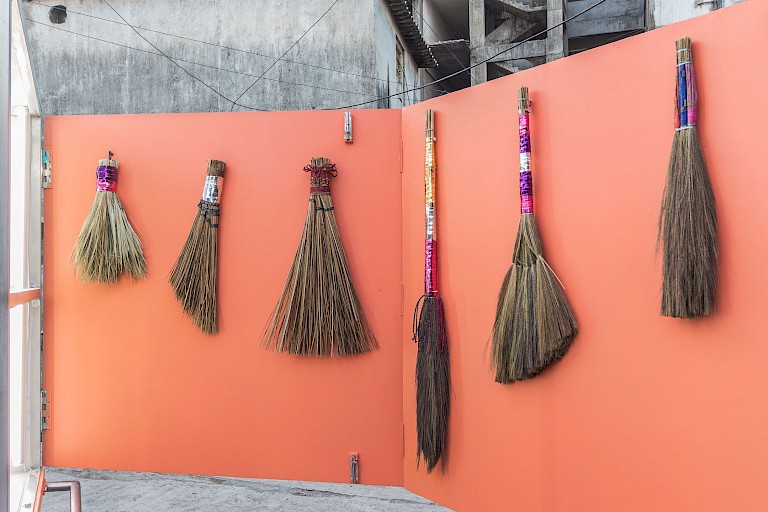 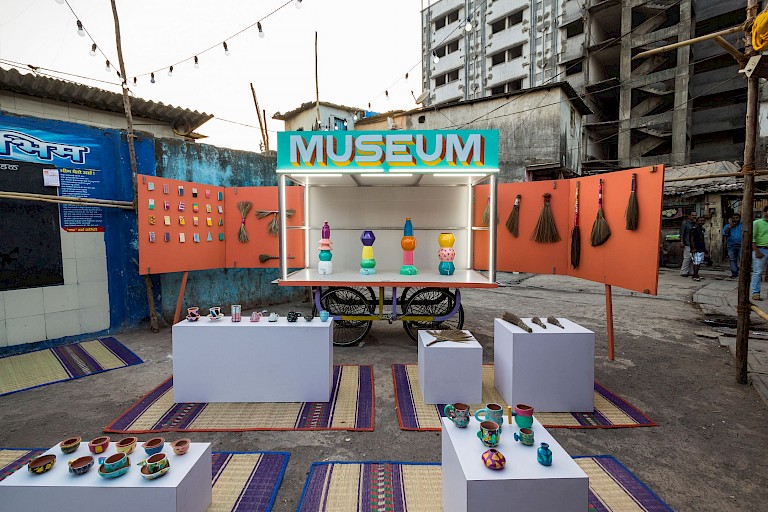 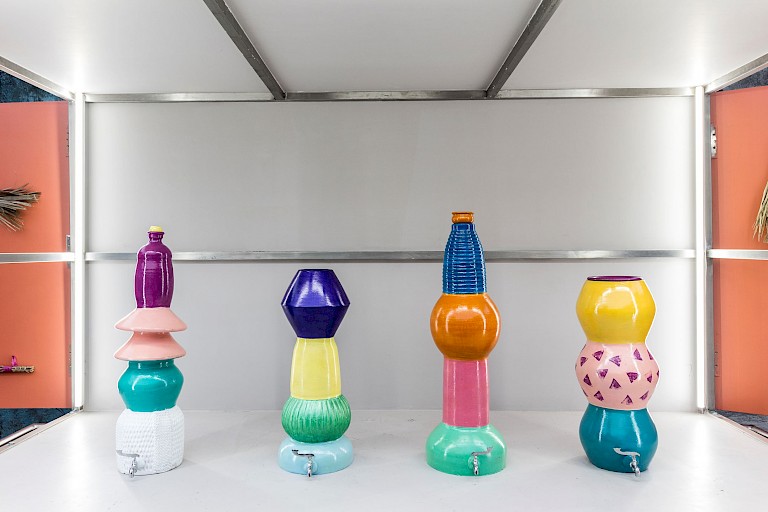 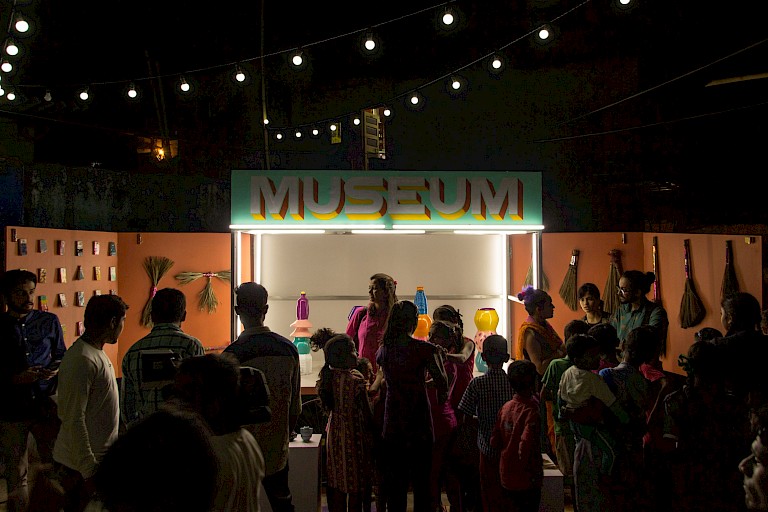 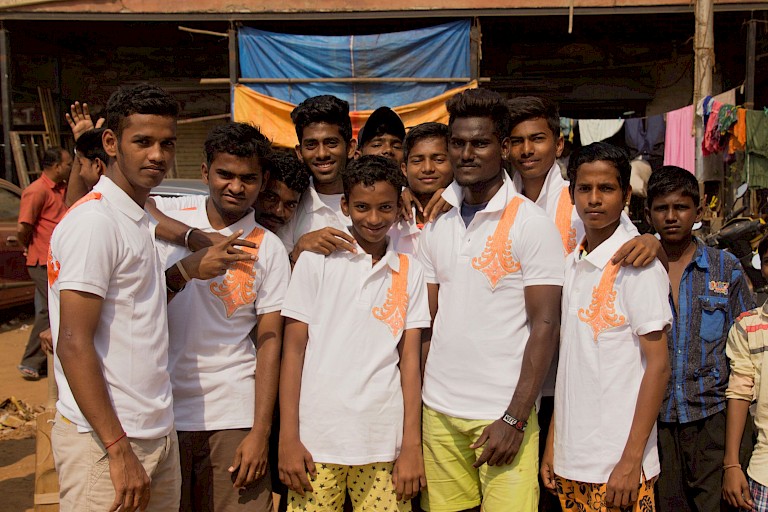 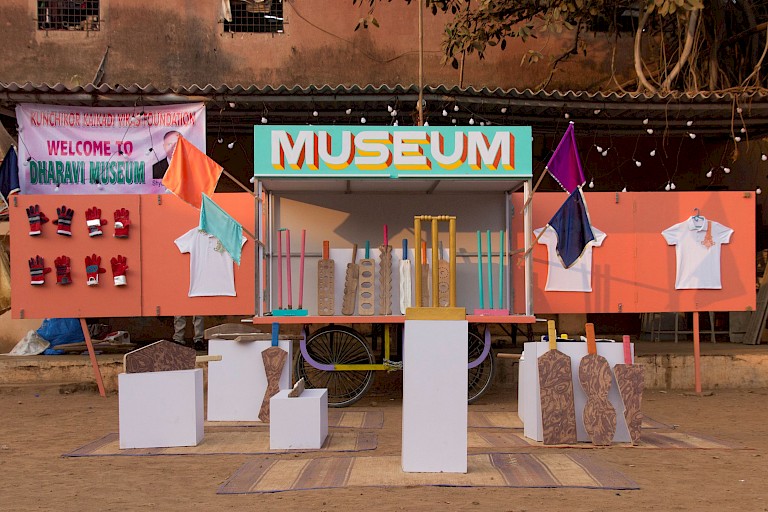 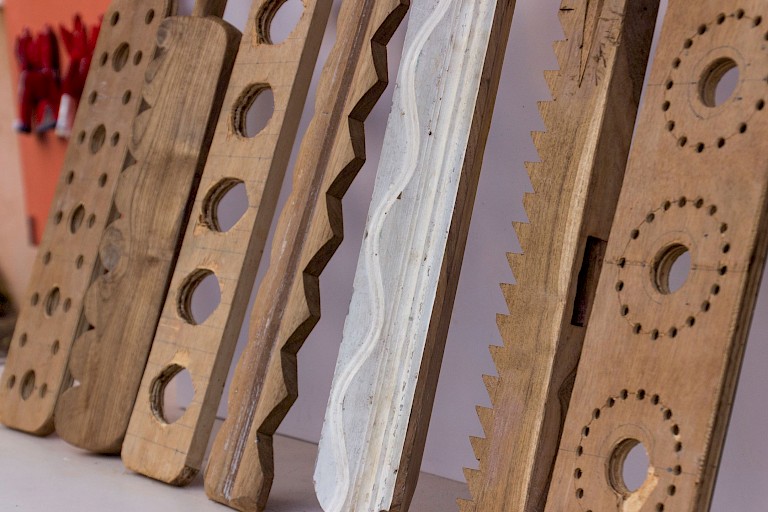 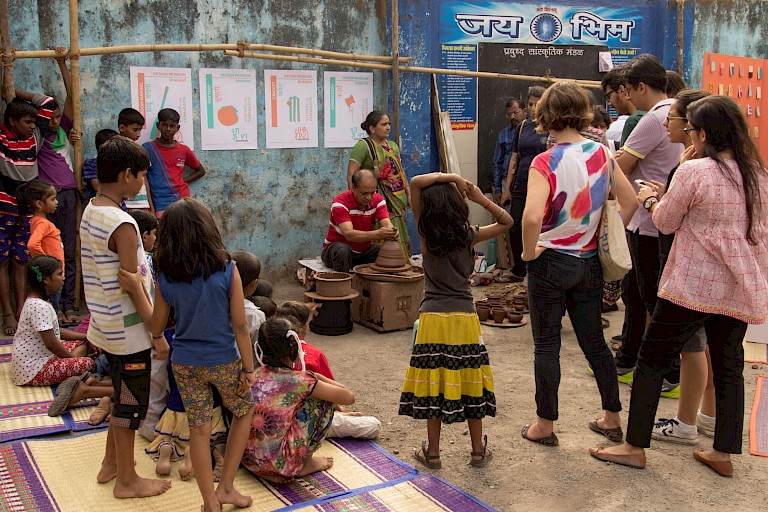 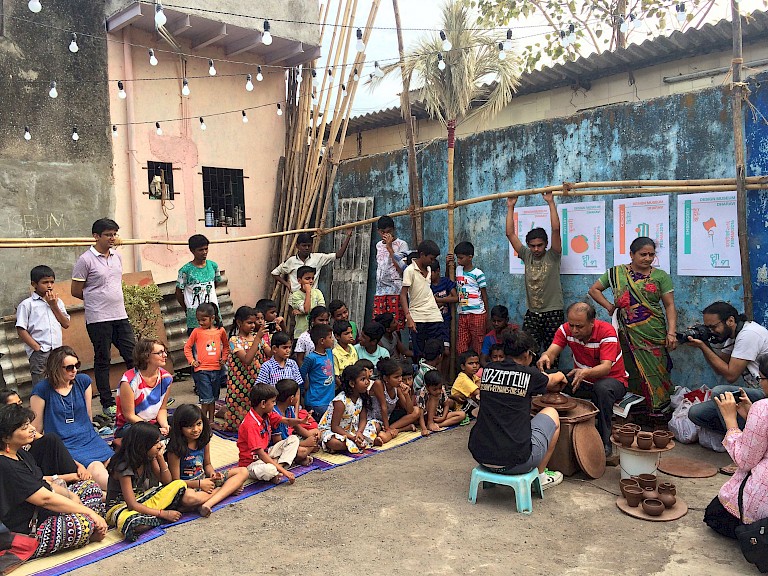 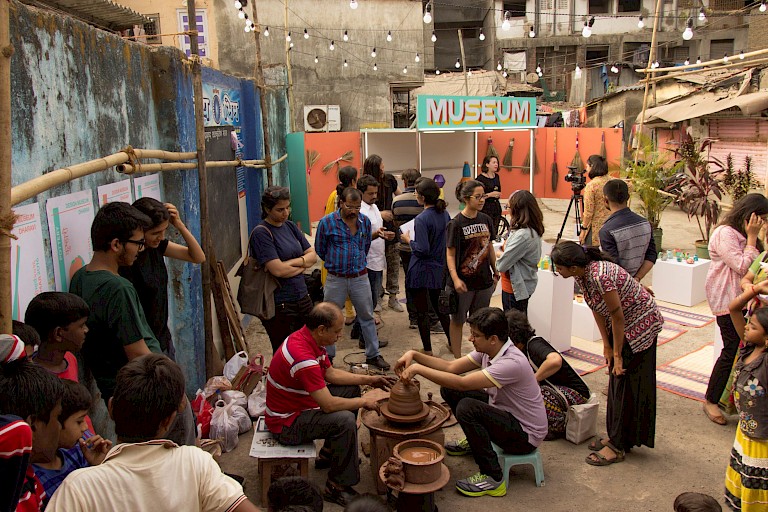