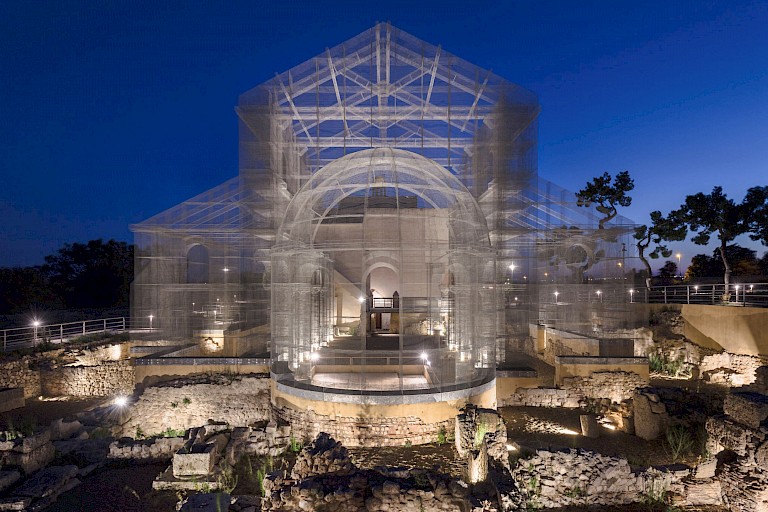 The Siponto Archaeological Park located in Apulia region, Italy, testifies the importance reached by the ancient city of Siponto as Roman colony from 194 B.C. The remains of the Early Christian basilica remind us that it was at the center of one of the most important dioceses of the region. The nearby church of Santa Maria di Siponto, built between the end of the XI and the beginning of the XII century, is one of the hinges of the Romanesque regional architecture. Between the end of the XII century and the beginning of the XIII century it was submitted to numerous interventions of remaking. For the construction and the architectural decoration, materials of the ancient Siponto like columns and capitals were reemployed.

In order to valorize the brand new Siponto Archaeological Park, the Italian Ministry of Cultural Heritage, Activities and Tourism (MiBACT) and the Archaeological Superintendency of Apulia region commissioned to artist and stage designer Edoardo Tresoldi the production of a permanent artwork in situ. He realized a monumental, scenic metal sculpture of impressive dimensions: 21 meters long, 30 meters wide, 14 meters high final structure, 7 tons weight and 4.500 square meters of wire mesh. The project was fulfilled after two months of design and planning, and two months of development. It was produced between November 2015 and March 2016, in this time, five months were used just for building the mental wire mesh.

After producing this work, in 2017 artist has been included by Forbes among the 30 most influential European artists under 30 and later, in 2018, he won the Golden Medal for Italian Architecture.

For the production of the project Dove l'arte ricostruisce il tempo a budgetof around 950.000,00 Euros wereassigned. It was also supported by the Archaeological Superintendency of Apulia region and the Regional Department of MiBACT, thanks to the European Regional Development Funds 2007-2013. The project’s realization required the involvement of the scientific expertise of ancient Art History from two archaeologists and a structural engineer.

The art intervention in Siponto Archaeological Park reinterprets the volumes of the ancient Early Christian basilica, located close to the Romanesque church which was erected 600 years later. According to the artist, ''the majestic transparant wire mesh sculpture, presents itself as a contemporary artefact perfectly integrated with the surroundings, and establishes a new dialogue between ancient and contemporary times, opening up new scenarios for preservation and enhancement of the historical and archaeological heritage. Detached by strong visual and volumetric decompositions and cherished by the atmospheric factors, the installation acts as a bridge to the memory of the place and allows the public to relate with time and history''.

Besides the positive reactions that mostly followed the opening of the ''new church'', there are also some critical ones. According to detractor of the Tresoldi's intervention – for whom he ''built'' instead of restoring the ancient church – the public funds and the role of the Superintendency should be first of all for the conservation of the remains of the Early Christian basilica, rather than the valorisation of the site for touristic purposes.

Edoardo Tresoldi's artwork, produced in collaboration with a young working team, composed by experts between 25 and 30 years old, has been selected by the Archaeological Superintendency of Apulia region in order to valorise the Archaeological Park of Santa Maria di Siponto and to ''reactivate'' the historical memory of place.

In order to achieve this goal, the artist, who previously worked in different creative fields such as cinema, music, scene and later specialised in building wire mesh sculptures, rebuiltthe church's structure in ''post-material'' terms, by using the lightness and the transparency of metal mesh, transcending space and time.

In Siponto, Tresoldi went over the solidity that characterised the structures of Romanesque architecture, which was diffused in several countries of Central-Western Europe between the XI and the XII century. In these terms, the artwork reflects on the relationship of Europeans with their own collective cultural memory and its illusionary compactness and stability: the ''new church'' is visually powerful with it's seemingly fading structure. In the same way, the iconographic image of the new church and the emotional experience produced by walking through its structure, replaces the ancient church through a metaphysical experience.

At the opposite side, for the artwork detractors, it creates a scientific problem for future studies about the archaeological site as well, by making “unreadable” the original layout of the Early Christian church, on which the ''new church'' has been built. According to them, even though the new church, that is the art installation, is made by wire mesh and it is almost invisible, it is materially standing on the original remains. In response to that, the artist affirms that the artwork has been conceived and realized through using an experimental solution that combined an idea of “soft restoration” with the understanding of the site's values, avoiding any kind of interference with the Romanesque church: the metallic structure - the artist points out - doesn't lean on the medieval pre-existent traces, but on a little wall which has been purposely built above the archaeological layer. Thus, according to him, it doesn't compromise the integrity and the maintenance of the archaeological site.

By playing with the materiality and immateriality of the structure, the artist in a way makes ''smoky'' and indistinguishable the architectural site-specificity, which, in contrast, is characterized by the Romanesque compactness, revealing the connection with the global character of cultural heritage, which, nowadays, is both material and immaterial.

Thanks to the Tresoldi’s artwork, in 2016 the Siponto Archaeological Park won the 25th edition of the Riccardo Francovich Archaeological Prize, an award founded by the Society of Italian Medieval Archaeologists (SAMI), conferred to the Italian museums or archaeological institutions that represents the best synthesis among the rigor of scientific contents and the effectiveness of science communication for the general public. The artwork got more votes than sites such as the San Gennaro / San Gaudioso Catacombs in Naples, which, for archaeological and artistic importance, are second only to the catacombs in Rome.

The excellence of this artwork is evidently linked to its impressive visual impact, and to the possibility of a material and immaterial experience of cultural heritage, produced by passing through the metal structure. Dove l'arte ricostruisce il tempo can be considered equally a stage design project in form of a monumental sculpture and is considered by the artist as “a kind of artistic development of the classical concept of restoration and a kind of innovative reinterpretation of archaeology, realized with the support of contemporary art”.

Finally, it opened a controversial but necessary debate about conservation, valorisation and regeneration of ancient sites for touristic purposes, which is one of the main assets for the economic and cultural development in Italy, at local, regional and national level. 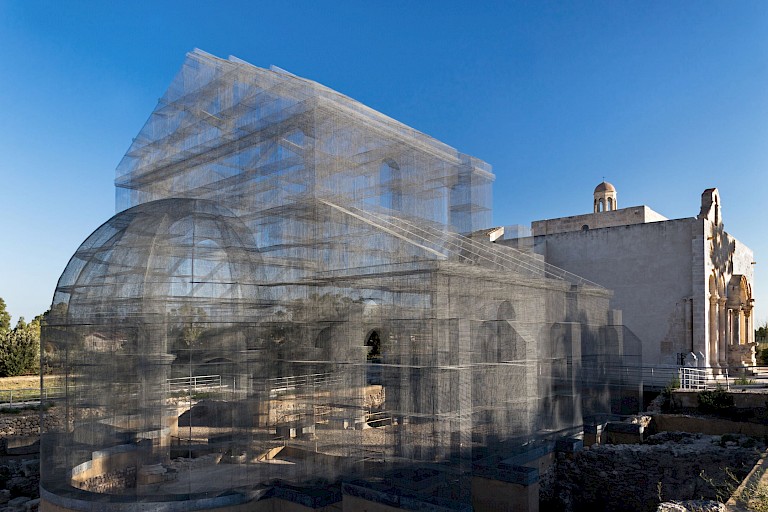 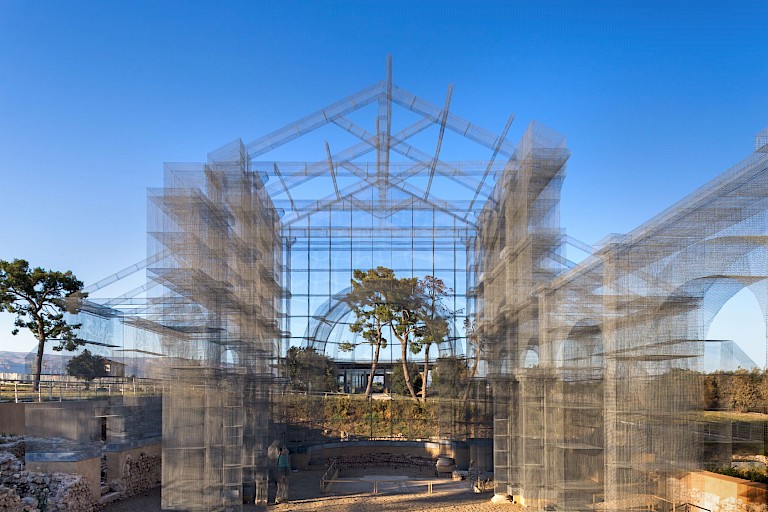 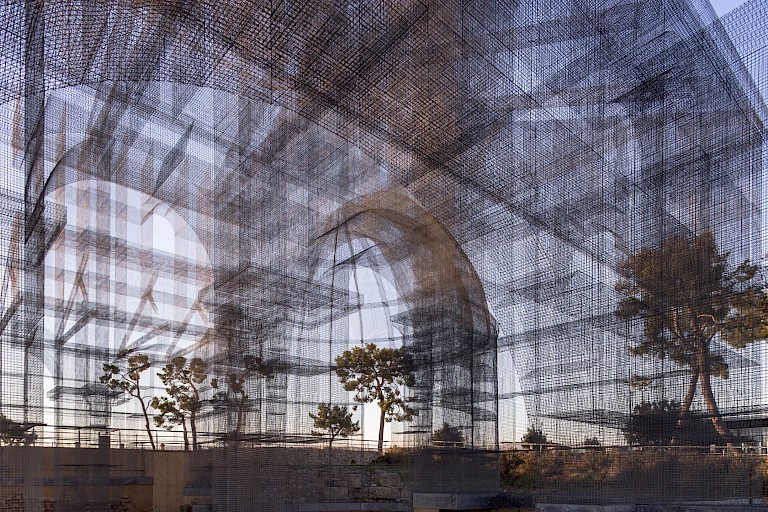 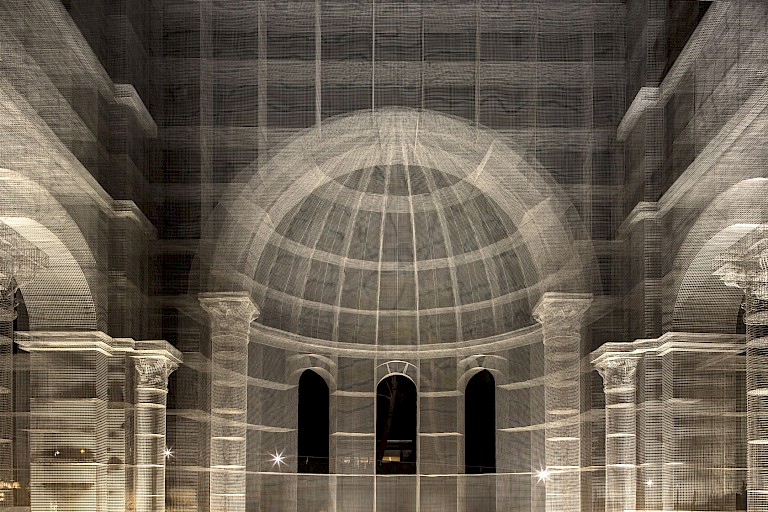