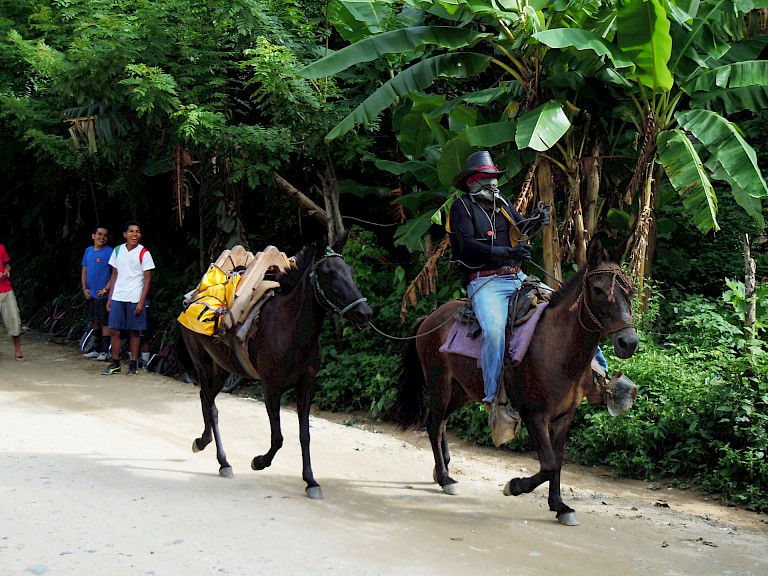 Bibliobandido, or Book Bandit, wears a disguise and “ravenous for stories, roves the jungles terrorizing little kids until they write stories to nourish his insatiable appetite.” Launched by artist Marisa Jahn in collaboration with villagers in El Pital, Honduras (near La Ceiba), the program provides book-making, story-telling, and basic literacy support through a volunteer “library committee,” consisting of about 15 adults and pre-teens.

Each month, the volunteers stage a Bibliobandido intervention with a masked character that rides into town on a horse or mule to demand a quota of stories made especially to keep the bandit at bay. “The kids and adults either believe El Bibliobandido is real or they like to believe the character is real. So there’s a role for everyone to play in the legend, even if it’s pretending as if they believe,” says the artist. 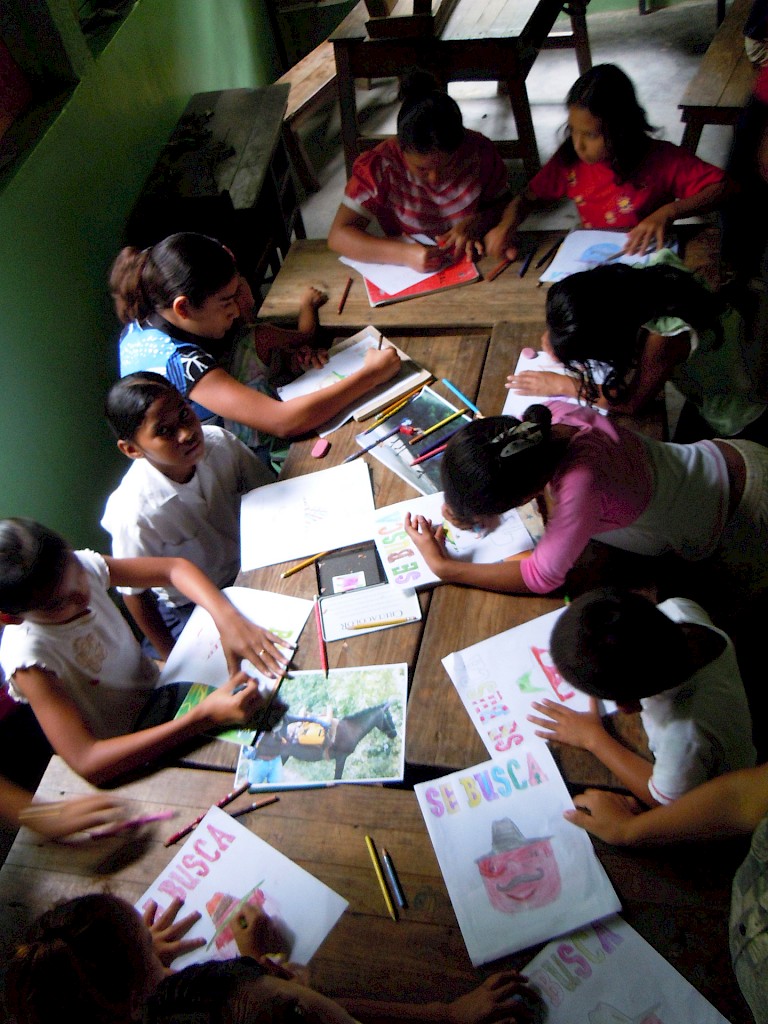 The Bibliobandido project raises awareness about the 80 percent illiteracy rate in El Pital and surrounding communities. By replacing the traditional models of teaching/tutoring with a high-visibility, artistic intervention the project raises awareness while remaining approachable and delightful. The workshops supporting the bandit’s appearance teach hands-on literacy skills, while the larger storyline keeps the participants engaged and excited for the next installment.

The project’s volunteer component is important, too. Many participants tell the artist that volunteering is a transformative experience. “They get to learn by teaching, they get to see new communities and learn about history, culture, and politics (many would otherwise rarely leave their village), and they get to develop leadership skills that they put into practice,” says Jahn.

The Bibliobandido project is the culmination of two years of work, during which Jahn built relationships within the community. “It takes on-the-ground organizing to create artwork with deep impact,” she says. That impact has spread. While Jahn has moved on to other projects, the “Library Committee” of teens and adults has taken up the project—and expanded it. The Bibliobandido now reaches more than 500 children in 18 neighboring villages, and other communities are adopting the idea and making it their own.

Jahn, went on to found the art collective REV, based in New York City, a “non-profit studio where artists, media makers, low-wage workers, immigrants, and youth combine bold ideas and sound research to produce creative media about the issues we face.” Her artistic practice is rooted in the notion that “art can play a role in fostering tangible impact.”

The artist is quick to point out, however, that she considers herself solely the initiator of a project designed to draw out creativity from her collaborators in Honduras. The IAPA nomination is shared, she says, with those who worked with her. “Visibility in forms like this is not only heartening, but also helps them increase visibility towards the issues they face and raise funds to make their work sustainable.”