Argentina sinks fifteen years ago, in the worst crisis in its history, when the government of "Fernando de la Rúa" imposed a banking blockade that made history with the name of "corralito". There was a great process of recession, strong fiscal deficit, current account deficit, balance of payments, absurd setting and consequently higher unemployment.

During 2001, there were many cardboard collectors, or as called in Argentina, "cartoneros", who were going through difficult times, some living with their families on the street. Then three friends, Javier Barilaro, who is an artist, Washington Cucurto, writer, and Fernanda Laguna, an art curator. They edited some booklets on heavy paper, called Eloisa issues, but with the prices, getting more expensive they decided to use the cardboard collected by the "cartoneros" and thereby bind the books. However, as an art project was consolidated in 2003 when they rented a small place with a shop in the neighborhood of Almagro, provided workshops and the collectors were involved in the production of books. In 2009, they became a legal union. 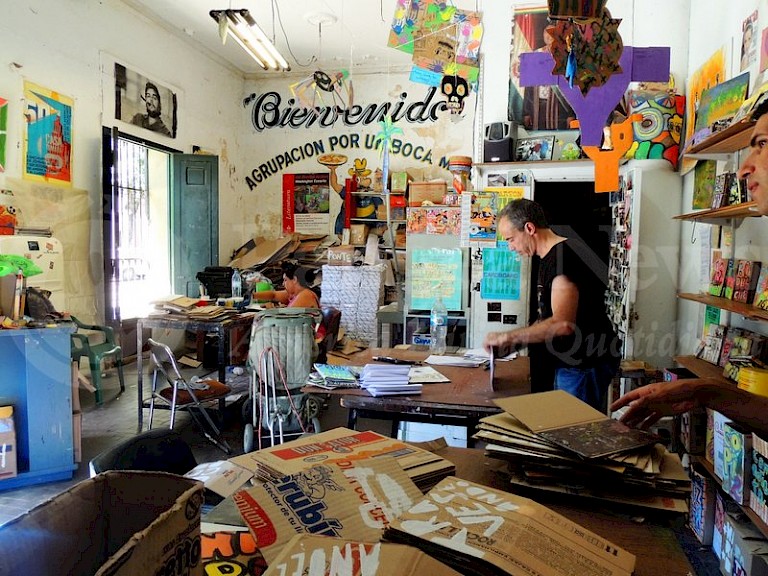 Currently, there are ten people who regularly work from Monday to Saturday. Now located in the neighborhood "La Boca"_ they dedicate to editing craft books with cardboard covers purchased directly from the "cartoneros". To the sound of good cumbia (Latin music style) heard, boxes turn covers, designed and painted with colorful temperas by young children of cartoneros, or by themselves, which receive for carrying out the service.

According to the National Movement of Workers and Recyclers cartoneros in Buenos Aires and surrounding area about 100 thousand people live in collecting of paper, with 98% of them do not belong to any association or cooperative. From the publisher, they receive 0.25 cents per weight per box (the market pays 0.45 cents per kilo).

"Eloisa Cartonera" as well as being a work that accompanied the economic transformation of Argentina, closely dialogues with issues that matter as the reuse of raw materials and the return to manual process that generates an informal subsistence economy. They are not only relevant aspects of the project to the country of origin, but with the Latin American and global reality.

As the first label of cardboard reuse in the world, there are now more than 80 all over the world. In addition to the headquarters, also conduct its sales in the "Plaza de Mayo" and regional book fairs. Each book is unique and sold for 5 argentines pesos, the issues are only a thousand units and for some people, turned collectibles.

The authors, Latin American writers they are people whom the members of the cooperative, had met throughout their lives. They give publishing rights, so they can edit their works. To spread the disclosure of the existence of "Eloisa Cartonera" are always added new writers. They currently publish more than 200 titles.

Moreover, this successful initiative served as a model for a "cartonera network." From Eloisa was born at least 15 editors, sisters, including Yerba Mala Cartonera (Bolivia), Sarita Cartonera (Peru), Lupita Cartonera (Mexico), Animita Cartonera (Chile) and Dulcinea Cartonera (Brazil). Among all, there are features in common: they are situated in the suburbs, they perform a collective work, produce limited editions and are always looking for new Latin American authors.

that hit Argentina for years. This situation came to creativity to change the material production and thereby develop a subsistence economy, involves other factors such as education through workshops, and develop content that would not be realized by conventional publishers. It is a job that involves many factors and today becomes a model followed by other countries, mainly in Latin America, where the recycling work is still very informal.

Work began grew as the circumstances present in the Argentine daily, and starting an independent production, the mechanisms of their survival and authenticity are linked to the collective work they carry out.