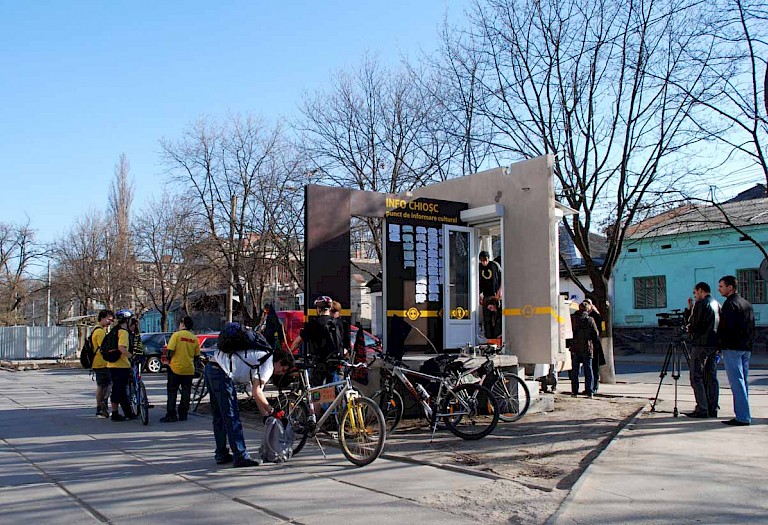 The Flat Space is a functional replica of a socialist apartment designed in 2009 by artist Stefan Rusu and commissioned by Oberliht Association, and installed in Chișinău, the capital of the Republic of Moldavia. The point of departure for the conception of the Flat Space design was the public display of the flat's private space, characterized by the standards of the socialist society, which still is a strong visual element within the contemporary urban and social landscape of East European countries.

The artist turned a space designed by the former authoritarian regime into a public space meant as democratic infrastructure, thanks to the Flat Space's architectural basic elements: the dining room, the kitchen, the bathroom and the main façade with a balcony covered with plastic windows, which functions as a cultural info point both for residents and visitors. 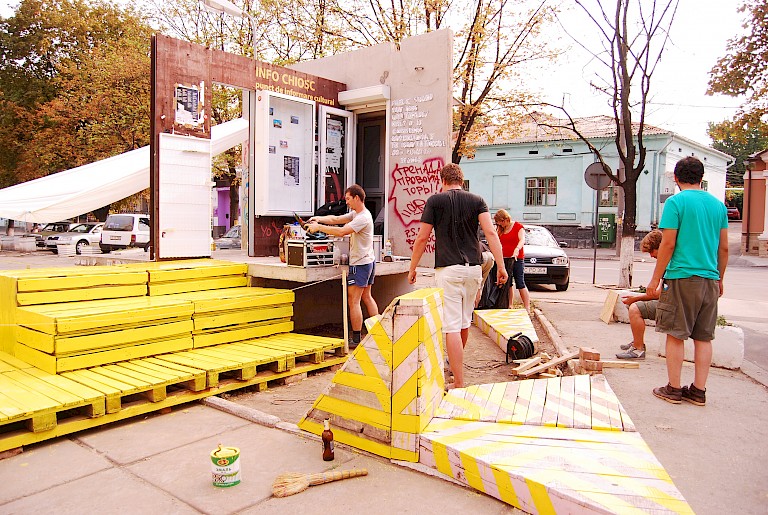 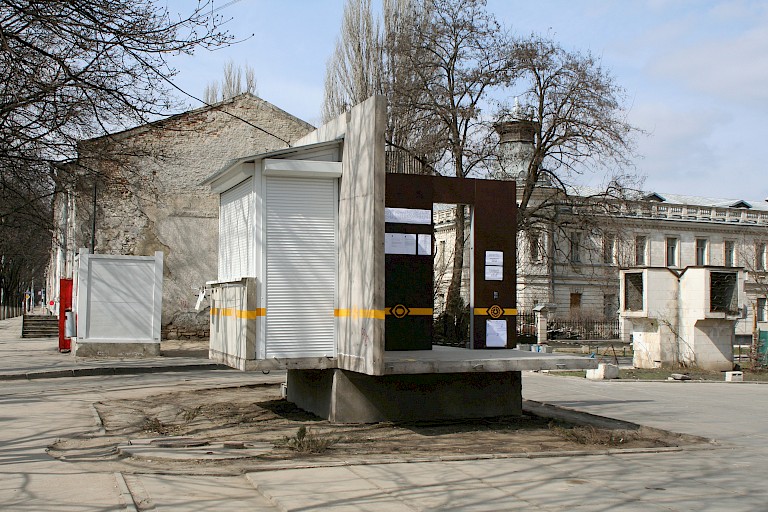 Chișinău is a city that grew and developed under different political and economic regimes, that's why Moldova still lacks independent mass media, institutions, and civil society. The switch from an authoritarian regime to a democratic one consisted, on one hand, in the never-ending economic transition and in the commercialization of public spaces for private benefits, followed by radical transformations of the social life in Moldova; on the other hand, the cultural institutions still act as in Soviet times, except during a temporary internationalization of Moldova's art and culture, occurred after the fall of the Soviet Union. The lack of available funds for independent culture initiatives still doesn't allow to educate a new generation of cultural workers able to deal with a globalized context.

It is designed for people interested in contemporary art and culture, but also in architecture, in social movements, in politics and in other public issues. From April to November each year, the Flat Space hosts a weekly program of activities and events, including activities centered on specific communities and social groups, like the flea exchange markets, the open air discothèques, some sports competitions, and some cooking and food sharing activities. They are attended mainly by urban youth, whom Oblerlhit Association proposes new opportunities of acting, thinking and exchanging knowledge of public issues.

Since its construction, Flat Space created a direct reference to the built environment of Chișinău micro-districts, the new urban areas developed after the Second World War, and encouraged the inhabitants to leave their flats and to get engaged, in order to increase awareness about the ways in which the public space is designed and governed nowadays.

As installed right in front of the Cultural Department of Chișinău Municipality's building, Flat Space provides a different perspective on the neo-liberal environment and on the role that artists and cultural workers could play while acting within it. Inside and outside Flat Space, Oberlhit Association runs a program that responds to different cultural and social needs of Chișinău inhabitants. Its main goal is to design new legal frames which would redefine the role of art and culture in the creation of sustainable urban development policies, and that of communities in decision-making processes.

The phenomenon of clandestine exhibitions, which proliferated throughout the Soviet Union in the years now known as the Brezhnevian. In 2008 an association of young artists, backed by the European Cultural Foundation and with the support of local residents, pioneered an alternative installation with which they took over the place and once again contradicted the official discourse. They called their project “Apartament Deschis” (Flat Space), in a deliberate word play between the notion of home (apartment) and the more immediate form of public space (flat place). It's a functional replica of a socialist apartment designed by Stefan RUSU commissioned to represent the identity of KIOSK project, a cultural info-point and a public platform for participation, that wishes to promote contemporary art and youth culture in public space, to state its importance in the process of transition by strengthening the local and developing the regional and European/international network of cultural operators and professionals.

The point of departure for the design of the FLAT SPACE/APARTAMENT DESCHIS project was to publicly display the private space of a flat limited by the standards of the socialist society, which still is a strong visual element within the contemporary urban and social landscape of East European countries. Moreover, the project was aimed at democratizing the cultural act through providing public access to events that were to occur in this space, somehow as a continuation of the “unofficial” or underground practice during the era of the totalitarian regime, when underground art was being denied access to “official” exhibition spaces and, more generally speaking, it wasn’t publicly accepted; the phenomenon of exhibitions in private flats proliferated during the stagnation years (1970s – 1980s), when underground art could only be seen in intimate settings by a small audience. In contrast with the small dimensions of the new housing built after the WWII and the earthquake of 1940, the interstitial spaces between the buildings were so disproportionate that, even today, the figures for unoccupied land in Chişinău are among the highest for European capitals. Since the market economy forcefully irrupted in Moldova after the country achieved independence, bringing about an almost total paralysis of state activity in the public sphere, those spaces lapsed into a state of neglect and chaos or taked over for private profit or illegally occupations, together with cultural facilities.

The transparency and the openness of the flat give the exposure to an architectural model extracted from the flat building that is composed from few basic elements characteristic to societies in transitions: the main façade with a balcony covered with plastic windows, dining room, kitchen and bathroom. The balcony is a key element, which will function as a cultural info point and will distribute information with cultural content. The rest of the space that is exposed to the public will bear a multifunctional character and will serve as an open platform for public presentations and cultural events. The installation is free of any bounds marking its perimeters so that it exposes to public view the intimate inside of a flat constricted by Soviet standards. It is slightly raised off the ground and, if its polyhedral geometry gives it a powerful visual presence, what it represents has a potent symbolic charge for anyone who has lived in a similar flat.