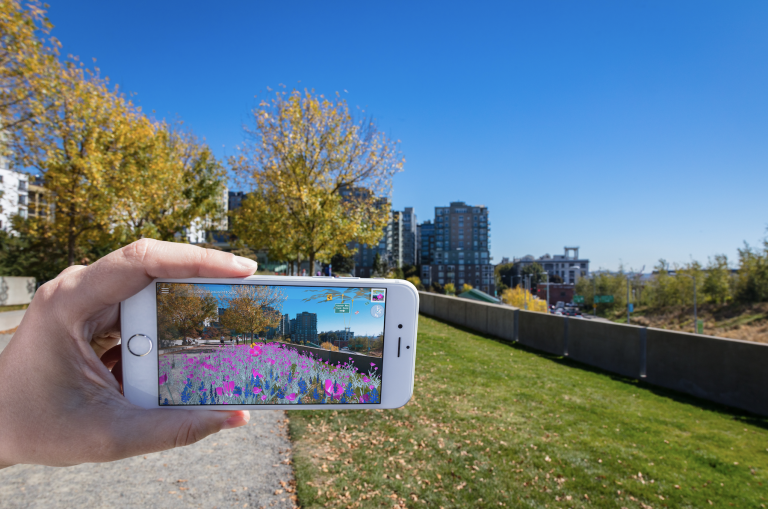 Gardens of the Anthropocene

Tamiko Thiel’s Gardens of the Anthropocene comprehensively merged the physical, environmental and social specificities of site to produce a particular and engaging work of augmented reality. Mixing possible futures with fantastic images, Thiel overlayed imaginary speculative botanical responses to climate change onto Olympic Sculpture Park. Anyone visiting the Park, with access to a smartphone, had the opportunity to view the artwork.

Her preparations for the work included consulting with experts on the natural and built environment of the Park and predictions on the climate; as well as, making visits to the site.

Still a somewhat new technology and medium for art at that time, Thiel kept in mind the limitations of costs, data and speed of the average person’s personal device. However, at that time and in-part today, projects such as this reveal issues with audience access.

Thiel’s pioneering work opens up the possibilities for immaterial artworks against a setting of corrosive elements, changing social values and a multiplicity of stories to tell in and about public space.

Tamiko Thiel’s Gardens of the Anthropocene is a site-specific, augmented reality (AR) artwork commissioned by the Seattle Art Museum (SAM), and presented at the Olympic Sculpture Park from June 25 - September 30, 2016. The work was curated by Carrie Dedon, SAM’s Assistant Curator of Modern and Contemporary Art.

Gardens of the Anthropocene posits a science fiction future in which native aquatic and terrestrial plants have mutated to cope with the increasing unpredictable and erratic climate swings. The plants in the installation are all derived from actual native plants in and around the Olympic Sculpture Park that are tolerant respectively to drought on land or to warming sea waters, and are therefore expected to adapt to the increasing temperatures to come.

Beyond this actual scientific basis, however, the artwork takes artistic license to imagine a surreal, dystopian scenario in which plants are "mutating" to breach natural boundaries: from photosynthesis of visible light to feeding off of mobile devices' electromagnetic radiation, from extracting nutrients from soil to feeding off man-made structures, and to transgressing boundaries between underwater and dry land, between reactive flora and active fauna.

The artist, originally from Seattle, visited the site when she was invited by the curator to conceive of a project. Her research began in 2014, a time when she was reading about the acceleration of environmental degradation. Based on specificities of state environmental conditions and the local context, Thiel shaped her speculative work around the Park’s landscape design, location between Puget Sound and in view of snow-capped mountains, while being part of an urban centre and active shipping harbour. Thiel consulted with climate scientists and the Park Botanist during this phase of imagining how climate change and our continuing use of technology in our day-to-day lives could shape this location. Taking off from the Park’s existing horticultural design--planted to reflect Washington State’s three climate zones, with native flora, accompanied by didactic labels, Thiel conceived of the following mutant plants:

When viewing the work, the plants seem to wander so that visitors have to actively look for them, mimicking the instability of dystopia.

The Olympic Sculpture Park, created and operated by the Seattle Art Museum, is a public park with modern and contemporary sculpture in downtown Seattle, Washington, approximately one mile from the Museum. The park, which opened January 20, 2007, consists of a 9-acre (36,000 m2) outdoor sculpture museum, and indoor pavilion, and a beach on Puget Sound. Admission to the park, which has permanent outdoor sculpture, temporary works, and site-specific installations, is free. Thiel identified this as an opportunity to break through the illusion that environmental damage occurs in and effects rural or natural locations solely. 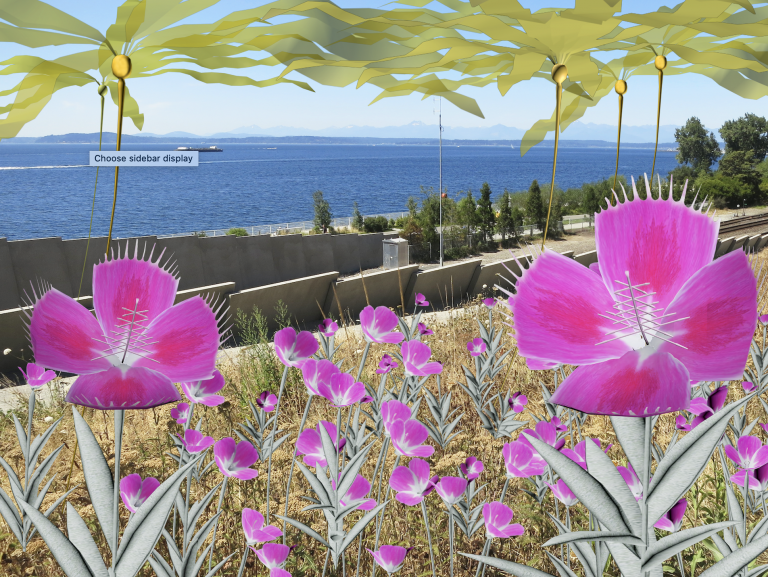 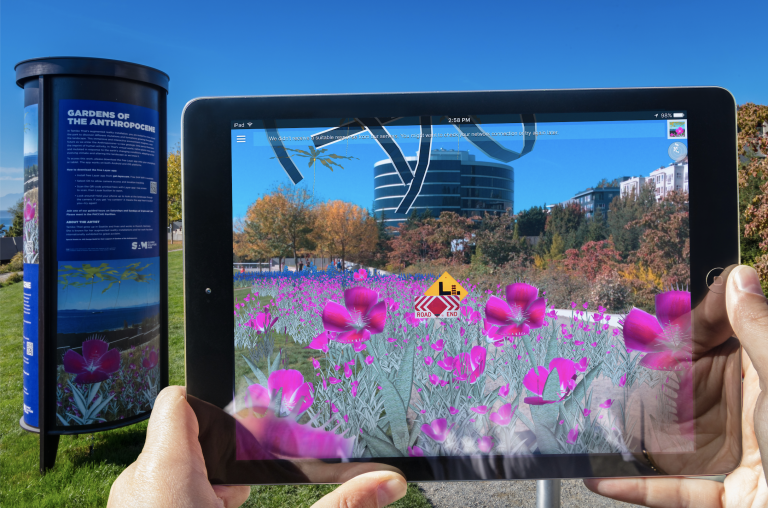 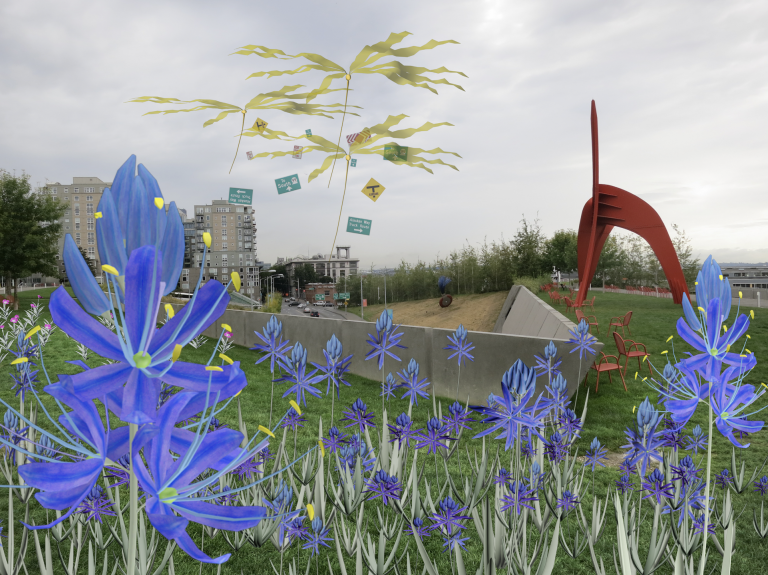 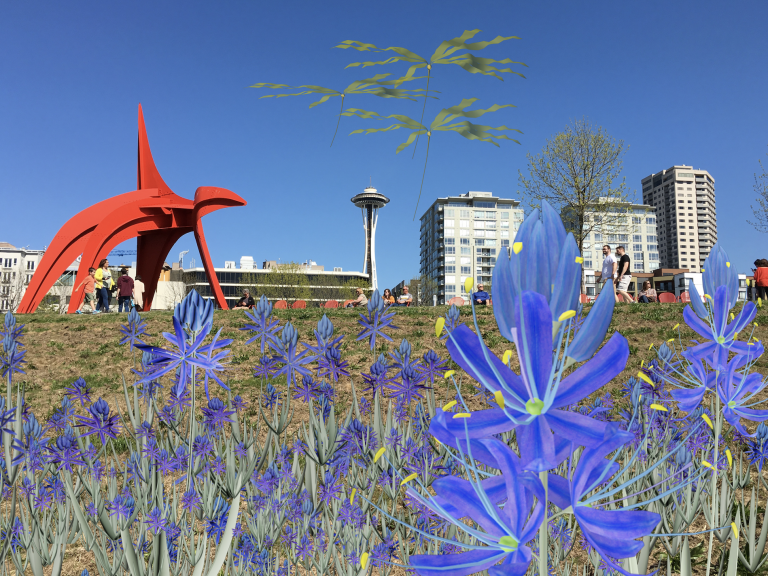