Mildred Beltré is an artist and activist working in print, drawing, and participatory politically engaged practice to explore facets of social change. Oasa DuVerney is an interdisciplinary artist in the areas of drawing, public works, and video whose work has a socio-cultural focus. The two artists are frequent collaborators under the banner of The Brooklyn Hi-Art! Machine, a project that began in 2010 when the friends and neighbours started making art together in each other’s apartments. As stories and experiences were shared while making new work, Beltré and DuVerney wondered if they would be able to bring a similar experience to their community. In 2010 the artists co-founded a collaborative public art project that explores art making as a communitybuilding tool. The Brooklyn Hi-Art! Machine is a community based, socially engaged project in Crown Heights, in the New York City borough of Brooklyn. Dubbing themselves the ‘Official Unofficial Artists in Residence’ of their residential block, Beltré and DuVerney set up tents, tables, a banner, and art supplies on the street outside their apartment building, and began working. Projects for the community have included offering services such as sewing and mending, art workshops, portraiture, and card-making for ‘thank you’ and ‘please forgive me’ occasions. Beltré and DuVerney have also invited guest artists to create projects in their neighbourhood.

Gentrifiers Anonymous (2016) was an awareness-raising public art project that brought together those from communities in the process of becoming gentrified, and those who were moving into these communities. Invited to create a public art project for the Month2Month Project, The Brooklyn Hi-Art! Machine responded with Gentrifiers Anonymous, which became part of a series of events around gentrification. Beltré and Duvernet, who have been residents of the same building in Crown Heights for the past 18 years, created the project as they saw tremendous social change in their own neighbourhood. Crown Heights is an ethnically diverse and predominantly African-American, Caribbean, and Caribbean-American neighbourhood that is rapidly gentrifying. Gentrifiers Anonymous took the form of a meeting “to have an uncomfortable discussion that was not being had” and also create a space where this uncomfortable discussion could happen. The artists gave out a pamphlet titled ‘You Discovered Nothing’ that illustrated a 12-step process of how to integrate into a new neighbourhood, including practicing good neighbourhood etiquette, something they say can get ignored by new settlers when old and new cultures mix. Steps included advice to meet all your new neighbours, not just those like you, and to help hold landlords responsible for ethical renting.

An invitation to the Gentrifiers Anonymous meeting was circulated by Month2Month and invited attendees “to publicly confess their own sins of gentrification, large or small, in order to explore their complacency and complicity in the citywide struggle for ‘affordable’ housing and the wholesale displacement of low-income New Yorkers.” Over email correspondence for this research the artists described the process of the event: “When people first arrived at the meeting they were invited to mingle, have a drink, and look over the pamphlet. Once the official meeting began they were asked to take turns speaking and a timer was set to limit how long people could
speak (We set a timer for 3 minutes, this of course was not followed by most of the guests). People were to introduce themselves and then share a story of how they are affected by, interact with, or benefit from gentrification.” The meeting’s rules – answers need to be short, will be recorded, and should be free of excuses – were followed by a classic opening following the template of therapeutic interventions: “Hi, everyone. I’m Mildred, and I’m a gentrifier.” Beltré began with a true story of how she once attended a tenants meeting after moving into Crown Heights only to discover that the meeting was about keeping out people exactly like her, people who came into renovated apartments with a rent higher than that charged to most other tenants. At that moment, the issue of gentrification became personal for her, Beltré said, her story setting the tone for much of the rest of meeting.

“I guess our goal was for people to walk away thinking more about what they do,” DuVerney told a reporter at the time of the Gentrifiers Anonymous meeting, “Thinking more about things that maybe are more subconscious and bringing this up to the surface.” As part of the Month2Month Project which created public art projects in private residences – some of which were upmarket and others ‘affordable’ – Gentrifiers Anonymous took place in the fashionable and wealthy Chelsea neighbourhood of Manhattan. The location of the meeting in a luxury apartment was not lost on Beltré and DuVerney, nor was Chelsea’s reputation as an art district and the neighbourhood’s own history of gentrification. Gentrification and art have a long and tangled history. While artists and galleries were instrumental to Chelsea’s rise to wealth and popularity since the 1990s, galleries are now closing or leaving for cheaper rents. The artists, of course, are long gone - a perfect example of irony and the circular yet ultimately destructive process of gentrification in which artists become beacons for local hipness but are an especially vulnerable population themselves.

However, there is a push-pull to gentrification. While its easy (and accurate) to talk about the the vulnerability of creative communities in gentrification there are other populations - literal communities - who are also vulnerable, and made vulnerable by the arrival of gentrifying populations, including those early signs of gentrification: creatives. It is precisely this dynamic that Gentrifiers Anonymous targeted and which made the project so exceptional. Most of those who attended the Gentrifiers Anonymous meeting identified as on one side or the other of the gentrification demarcation. Some talked about how they had arrived in their neighbourhoods and the circumstances that drove them to move. “The discussion, because it was centred on gentrification, ended up being a discussion about race/racism and class” the artists commented. One African-American speaker whose family lived in a Queens neighbourhood for generations pointed out the irony of her family members being perceived as ‘other’ in a place which is the only place they have lived. Beltré and Duvernet – mothers, Caribbean-Americans, native New Yorkers, and long term Crown Heights residents – describe themselves as in one way typical of their neighbourhood yet also, as part of the art world and friends with those now arriving to live in the area, part of the issue. It is here that Gentrifiers Anonymous calls out its own name the loudest, the meeting’s name and objective close to those organisations such as Alcoholics Anonymous that are geared to make attendees recognise their own enabling. “Gentrifiers Anonymous was a way for us to approach the issue of gentrification as well as race, gender and class for an audience beyond our block” Beltre and DuVerney explain. “One thing that was powerful about the meeting was that people were asked to talk about gentrification as something that they participate in, are part of, it isn’t just something ‘out there’.”

Recently protests over the role of art in gentrification have flared up in cities across the United States, as artists, galleries and exhibitions become flashpoint in the debate over racial representation and rising housing costs. While Mildred Beltré and Oasa DuVerney’s project sought to make attendees recognise their own complicity in gentrification, which more often damages neighbourhoods than ‘improves’ them, the meeting was not a further cataloguing of the evils of gentrification, but a consideration of the dynamic of urban districts. Gentrifiers Anonymous emphasises a knowing self-deception and asks that those implicated in gentrification to understand they have a degree of conscious or unconscious participation. Rather than proposing an impossible utopian ideal, the strength of the Gentrifiers Anonymous project is that it takes the world’s inevitable processes as its fuel and re-imagines them, proposing a new approach to the processes already in motion at grass-roots level. Gentrifiers Anonymous is an exceptionally multilayered project, an artwork that rewards reflection and is political at a very intimate and pragmatic level. 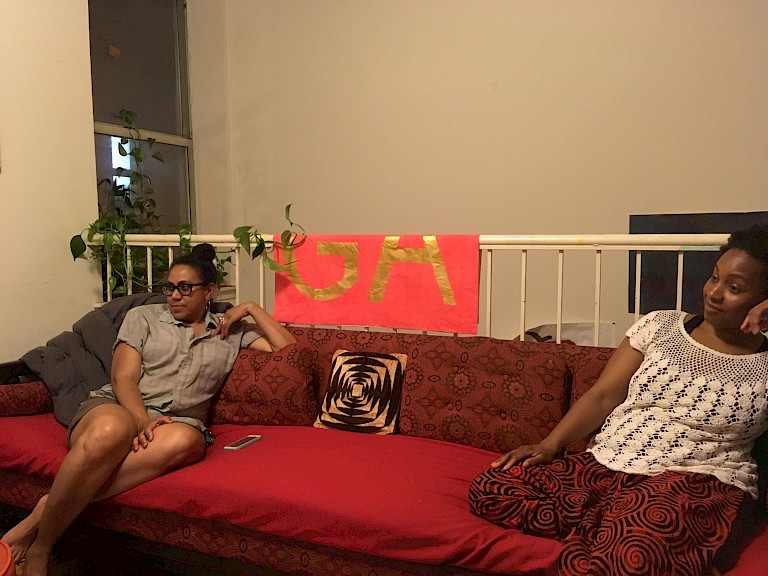 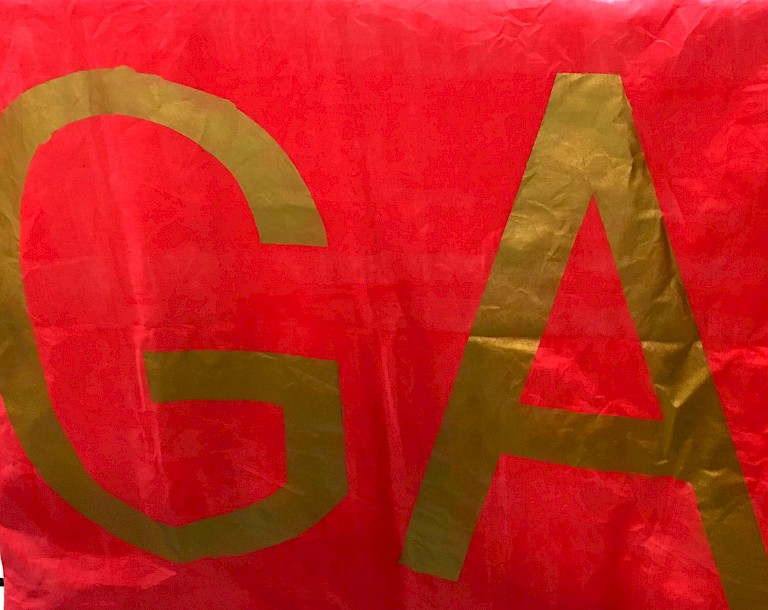 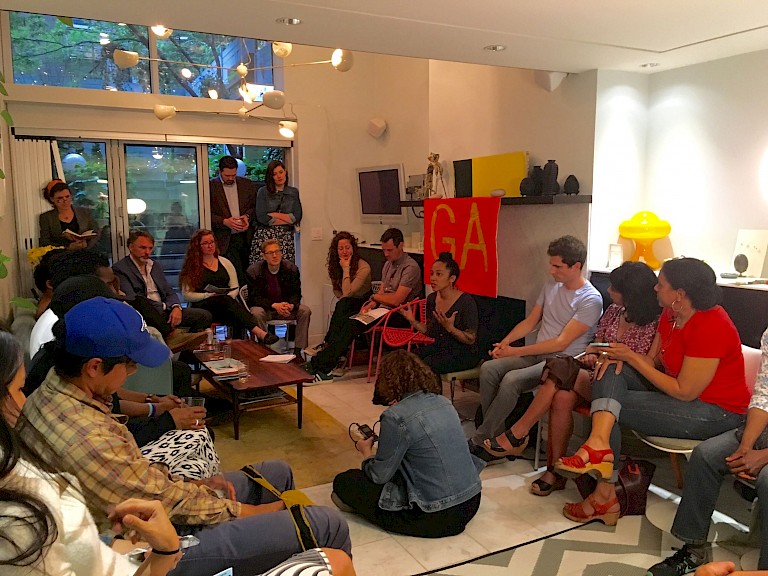