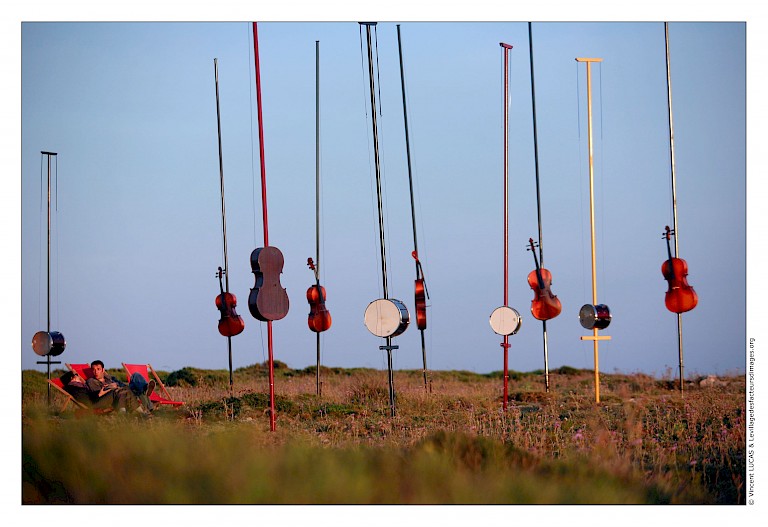 In 1995, in Marseille, artists Michel Crespin and Pierre Berthelot founded the Cité des Arts de la Rue as a response to the precariousness and the insufficiency of spaces for creation, experimentation and production of art in public space.

The Cité des Arts de la Rue is a space of 36.000 metres squares, conceived and designed by architect Isnardon-Lacube-Redondo as an immense scenic laboratory. It includes around twelve organizations working in the fields of art creation, production, education and distribution, in order to be a whole ''mission chain” and not just a space for presenting art.

La Cité connects the past to the present history of place: in the XIX century the site has hosted several artists and musicians, such as Frédéric Chopin, George Sand, Frédéric Mistral, Toulouse-Lautrec, before being destroyed in the 40s for building the highway A7. It soon became a cultural landmark of the whole region and a key-tool for identity and cultural local development, thanks to the involvement of local inhabitants, social activists, cultural operators and local companies in the process of transformation of place, from cultural heritage to a common good.

In 2011, the Cité des Arts de la Rue hosted Harmonic field, a huge public event which took place in the frame of the official program Marseille-Provence 2013 European Capital of Culture, welcoming approximately 120 000 spectators. It consisted of a symphonic march for aeolian art instruments and moving people, designed as a sculptural – musical installation created by Pierre Sauvageot, who is an artist, composer and the current director of the Cité des Arts de la Rue.

The project resulted from Sauvageot’s working experience, following the militant bands in the 1970s, and playing free jazz and trumpet in the 1980s, when the artist joined multi-instrumentalist, electro-acoustician and artistic director of Décor Sonore company, Michel Risse.

After being created in 2010, the installation travelled throughout Europe, from South of France to Austria, and from the Netherlands to the United Kingdom, where it was adapted in situ according to the field's dimensions and shape. By changing locations, the characteristics of the installation changed as well, according to its compositional, environmental and visual elements, which were the resonance, space and temporalities. The duration of the musical performance was also unpredictable, since it depends by the intensity and the direction of the wind.

In Harmonic field the main players werethe open sites and the surrounding landscape, which were experienced by visitors as elements of a musical score, immersed in an isolated place, which is far from the urban centres, and, at the same time, readily accessible by the public.

The artist created a poetic symphonic march for 1,000 aeolian instruments which were purposely created, by combining technical and composition quality of music and aesthetic values. The march was composed by a prelude for 300 Balinese wind chimes, followed by an adagio slalom of tuned bamboo pipes, which gave way to a reflective passage for suspended cellos and deckchairs, and a pentatonic interlude of turbine-driven glockenspiels. The symphony ended with a coda drawing together all the elements in a climax of either frenzied dissonance or a soft, extended diminuendo, depending on the weather conditions

To be produced, Harmonic Field required remarkable artistic and technical knowledge, a practice-based experience and a proper site which satisfied the best conditions of exposure to the wind, which actually played the instruments. As well as the artist, composer and art director, other people were involved in the design and realization of the project, precisely: a designer for musical sculptures and signposting, two wind and music “amateurs”, a choreographer who planned the movements and the interactions with the audience, visual makers and people organising the windmills.

Harmonic field worked as a circuit that spectators-listeners traversed in diverse movements and directions, crossing different paths of the field. The audience strolled through an alphabet of the wind between the bamboo organs, relaxed on loungers surrounded by harp cellos, following the line of long strings to reach the grand finale. Harmonic field is created for all kinds of public, like children, adults and families, who moved freely around the site creating their own concert. A welcome area set at the end of the circuit provided the public with a convivial place to relax, discuss and share their impressions away from the walking-concert, producing another form of encounter, in tune with the time of nature and without electricity or computer.

Harmonic field was also an original way to stimulate people to create their own way to listen to and live experimental music, alone or collectively. Finally, walking through the symphony orchestra the visitors felt themselves as part of the harmony of the landscape, produced by the interaction of musical, visual and natural elements. 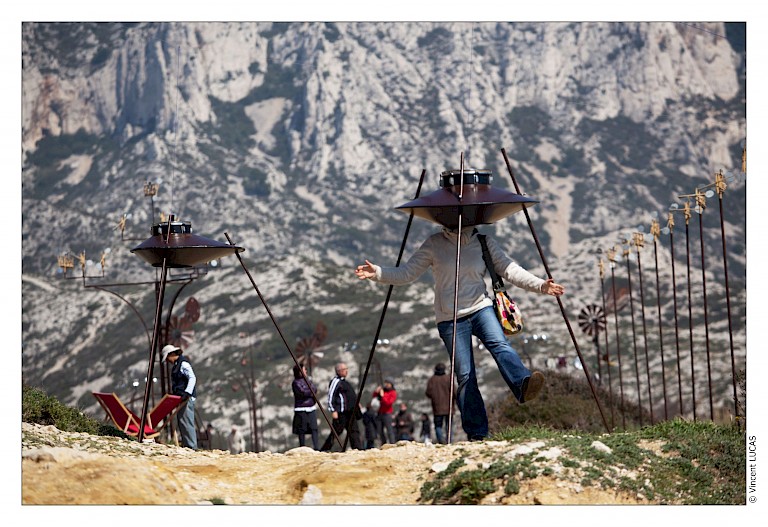 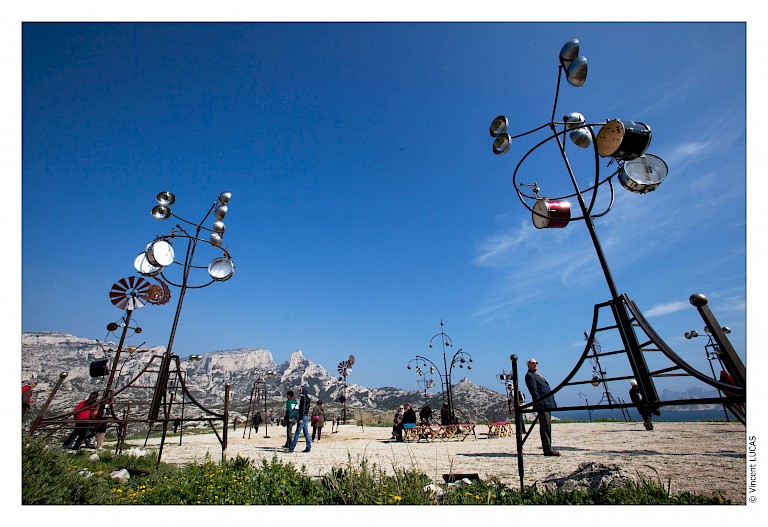 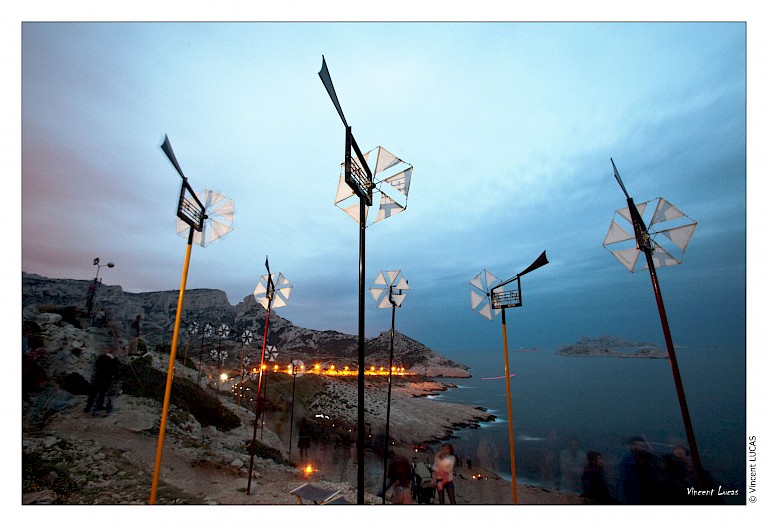