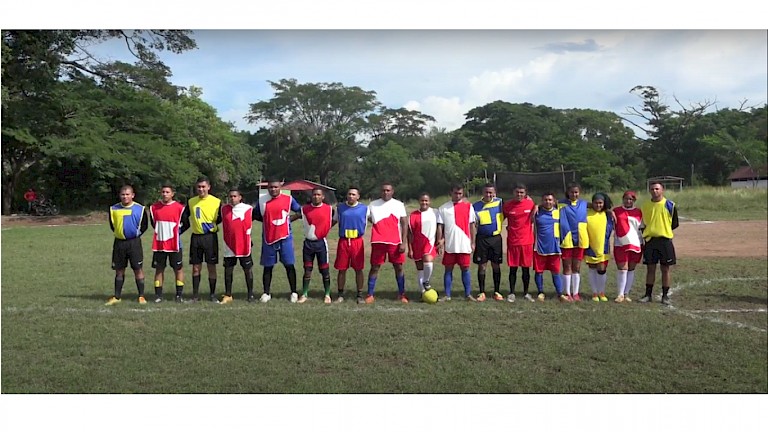 After peace agreements in Colombia, some ex FARC (Revolutionary Armed Forces of Colombia) members have turned their war skills into productive projects. These former socialist guerillas now dialogue with the capitalist system. The artist worked with Fariana Textile Company, the sewing company ex guerrilla members have created in which they apply their knowledge on the sewing of camouflage uniforms to now sew other kinds of uniforms and garments.

This project consisted on the designing and making of 18 soccer uniforms in which colors from the Liberal Political Party and the Conservative Party where combined. Later, a soccer match was played in which ex FARC Guerilla members and some current police officers were split into two teams made of a mix of both groups of people, men and women together. 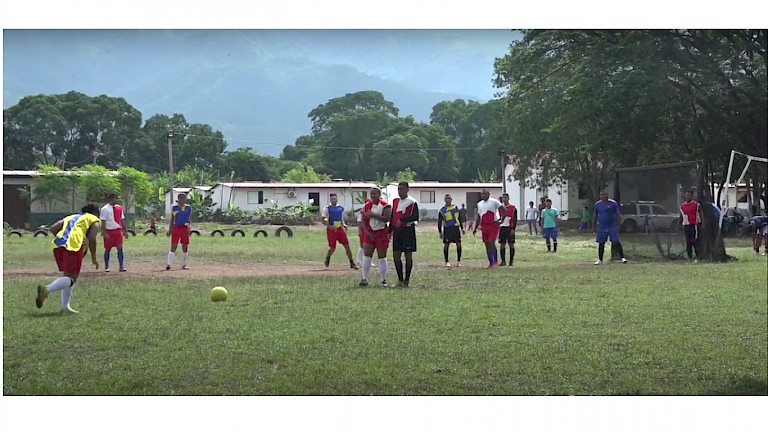 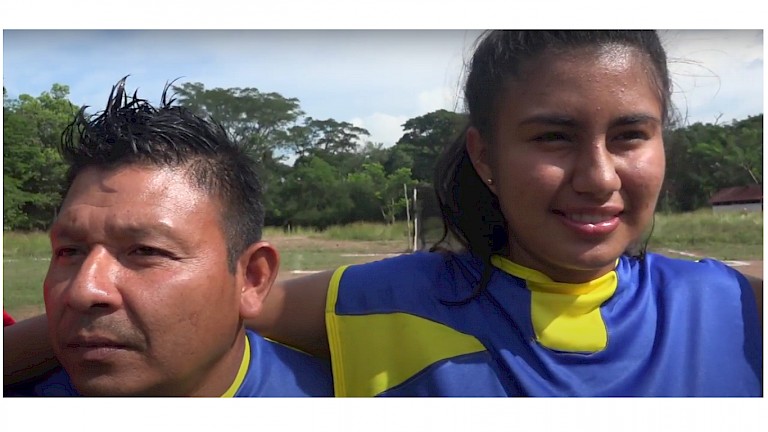 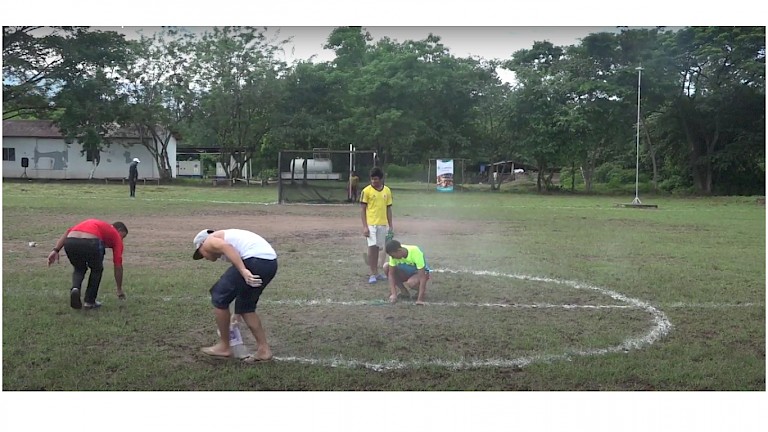 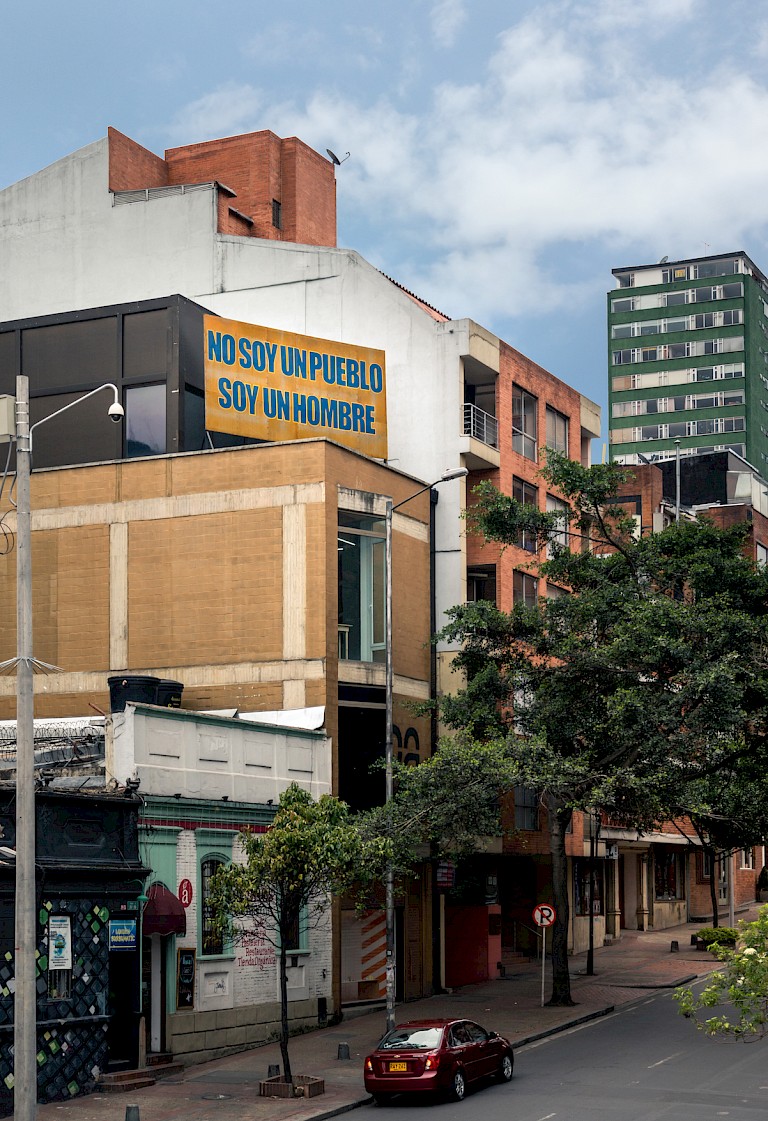 In 2016 the Colombian government and the FARC-EP guerrilla, the oldest in the country, signed a peace treaty that was looking to end an internal war that has been going on for more than 50 years. The process of disarmament and reincorporation to the civil life for the reintegrating ex-combatants implied many phases that were developed through the years. With the first phase of surrendering their weapons and dismounting of the FARC in rural Transitory Communities for Normalization finished. In 2017 the second phase started, for which 24 Territorial Spaces for Capacitation and Reincorporation (ETCR) were created for the ex combatants. These places of transition and reincorporation were distributed throughout the national territory, in these places they looked to transform the abilities and knowledge of the ex guerrilla members in productive projects that aimed to help them earn a living and built some life purpose for themselves. This phase of the project was voluntary and was expected to generate possibilities and tools for them to insert themselves in the civil life and contribute to the construction of the nation.

On another end, there is HAWAPI, an independent cultural association from Peru that works in many parts of the world. They take interdisciplinary artists to specific places to investigate and produce interventions in public spaces. These encounters take place in spaces affected by, and that are representative of, certain social, political, economical and environmental issues.

In their 2018 edition HAWAPI took place in the ETCR Amaury Rodriguez that had approximately 250 habitants and was located in Pondores, Guajira, a state in Colombia.

This process of artistic residences was trying to get a closer look to the situation of the Peace Treaty agreements that were signed through direct contact with the people who were going through the “reinsertion” process.

After a communication strategy from some political sectors of the country that, to give an example, where more interested in the money and prebends that these people were going to get from the government in areas with a high poverty situation and very noticeable estate abandonment indexes, the Colombian citizens voted for “no” in a referendum for the people to approve the peace treaties in 2016.

Under this landscape, Henry Palacio meets with a community that, although they carry the political burden of being ex combatants, is a rural community of country people and peasants living in a small village with very precarious conditions who are trying to start a productive project, particularly, a textile company. The intention of this settlement was to turn the knowledge acquired while at the guerilla and for the war now into small businesses. As an example, the people who built the butts of the rifles in wood were now making chairs in woodwork. Those who sewed the camouflage uniforms were now making uniforms for corporations, etc.

The sewing knowledge Palacio acquired from his mother made him consider this skill as a way to contrast political postures in a symbolic manner. His knowledge of sewing machines and patronage allowed him, during his residency, to work in the development of sport uniforms with the colors of the Colombian liberal and conservative parties, making mixed patterns between them and proposing a soccer match, forming two teams constituted by men, women, ex combatants and current police officers.

The closing of this residency was an exhibition in Espacio El Dorado, an art gallery in Bogota, the administrative center of Colombia. Just like many others of Palacios' projects the artistic action happened in the actual soccer match and its surrounding actions in the encounter of different symbolic dimensions dependent on a specific space and time that were hard to translate into an exhibition language and space. With the promise of exhibiting the results of the residency in Bogota and without intending to document or translate this project to a visual or audiovisual object, the artist was able to convey the main message of this project through another symbolic operation connected with the context he was given.
On the terrace at Espacio El Dorado he installed a fence with a yellow background and blue letters that reinterpreted a famous phrase by Jorge Eliecer Gaitan, a liberal politician who was killed in 1948 (episode directly correlated to the start of the armed conflict) which reads “I'm not the people, I'm a man”. This gesture installed in a private space that acts in the public space in a way that it can be seen by the passersby from the street, manifests the profound contradictions of this conflict, on one hand, the failed project of the left party and its common horizon, and on the other hand the circumstantiality of belonging to a faction or the opposing one that reveals the necessity of autonomy for the coexistence of all.