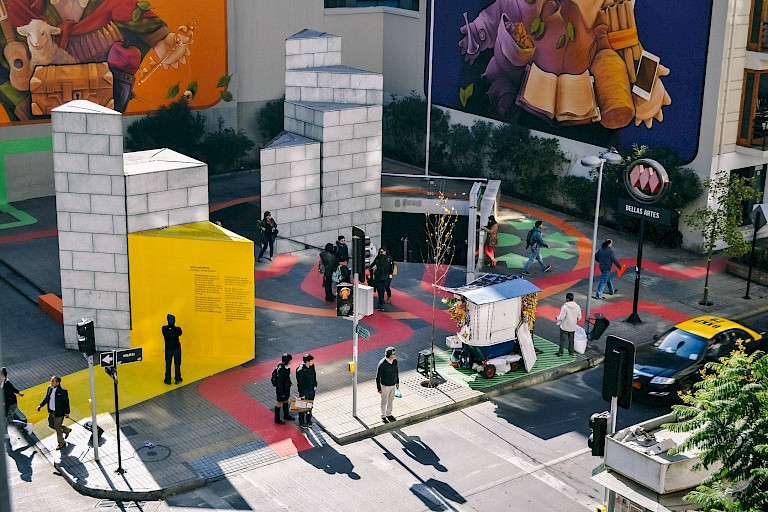 In order to be a colorful touch in the center of Santiago, Chile, the studio 100architects developed an intervention project that established a series of functions to encourage social relations through the modification of spatial perception.

With this in mind, the proposal was to create an area with lines that mimic the human footprint, forming paths and creating movements that lead to situations of routine breaks, suggesting a moment in which art can fulfill the function of showing things beyond the ordinary, even if this place alone has a more differentiated atmosphere, since the studio is located in the Bellas Artes neighborhood, a highly cultural area of downtown Santiago. The installation was build over the Bellas Artes subway station, a place that works as a square of low functional nature, where great part of the area is not used. The idea was to revitalize this place as a catalyst for related activities, both in regard to the flow of people and to the cultural nature of its neighborhood and reconfiguring, even briefly, a new vision for the use of public space, inserted in the urban fabric of the city and influenced by its mobility.
The material used in the art installations was polyethylene coated tape of various colors and sizes. Being this the only material used, the existing spatial structure was not altered, but enhanced. This material acted as a garment for the surfaces of the existing square, awakening new spatial possibilities based on its structure. These new spaces possibilities were functions available in the middle of these paths that were opened to be places of social and aesthetic interaction with the public space.

Among the proposed functions the "selfie wall" stands out: a type of stage for artists performances and street musicians to express themselves freely, a meeting point that allows the recognition of people leaving the subway station, as well as other informal and spontaneous uses such as the "sales zone", the "directional arrows" and the "seat benches". Another important feature of the project is the opportunity for transition between the physical space and the virtual space that comes with the use of the installation, being a platform for socialization and spatial valorization in both spacial networks.

This intervention was part of a series of urban interventions for the project “Arqu'tectua Exposuesta", which was carried out in streets in emerging countries around the world.

Huellas Artes fulfills a function to which many public art projects propose themselves: to construct new possibilities of interaction between the city and its citizens. Often people create daily fixed routes of travel and follow them almost in an automated way, without changes or novelty, hardening the relation with the public space. Within this context, public art creates new configurations for this relation. And even if the project fits into such a pertinent approach for this expression of art, it differentiates itself by thinking of how to place itself in the space in which it is intervening, creating not only one but multiple possibilities of re-creating a place with a lot of unused potential, that the project briefly evokes through a stunning color aesthetic. 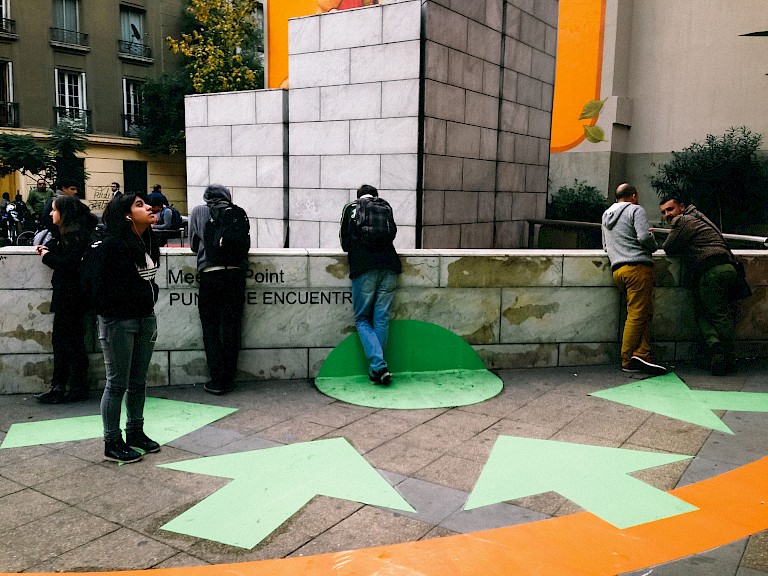 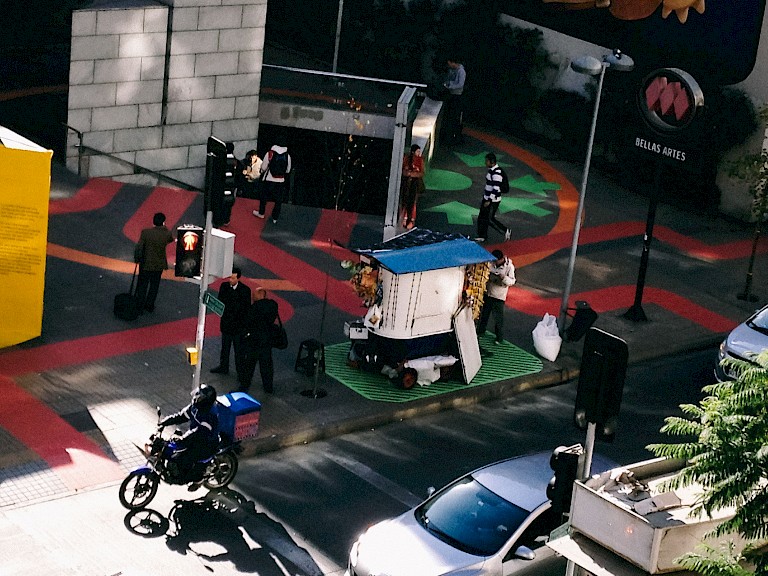 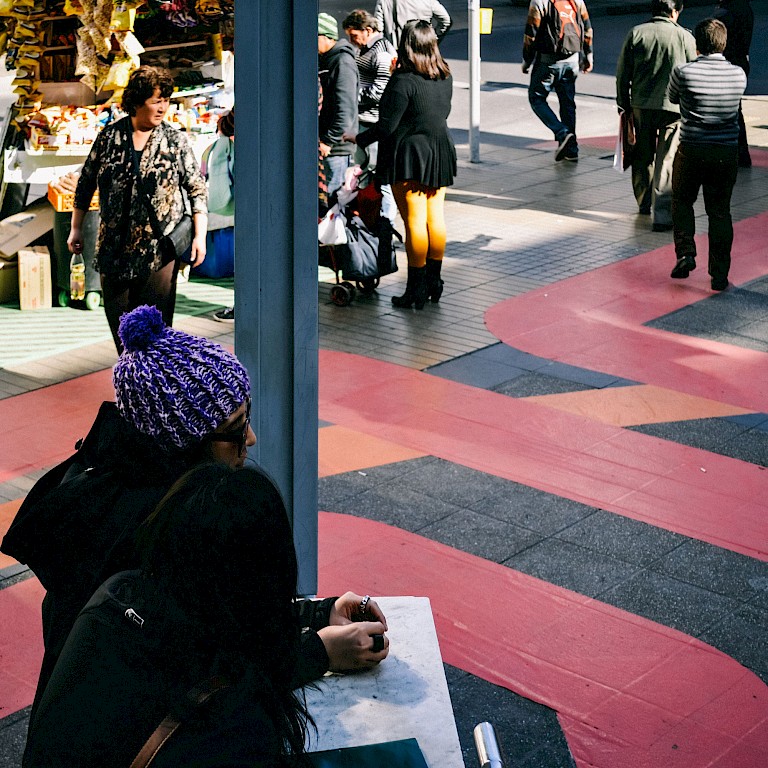 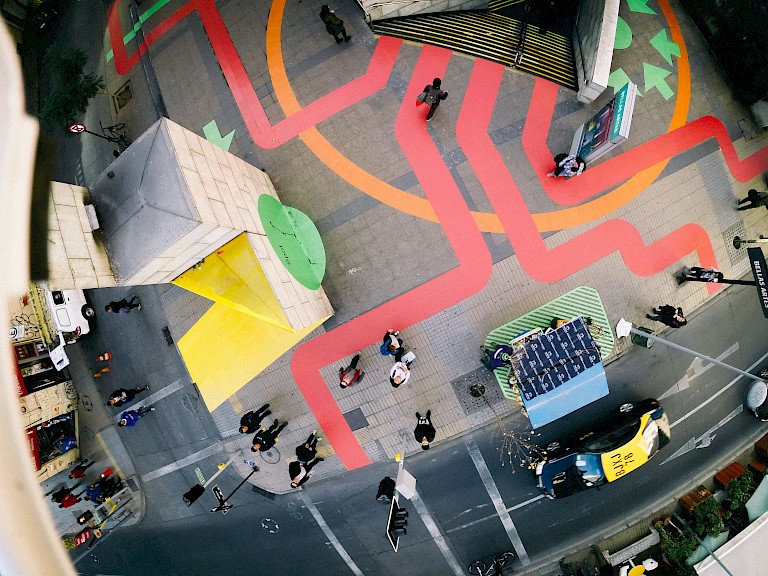 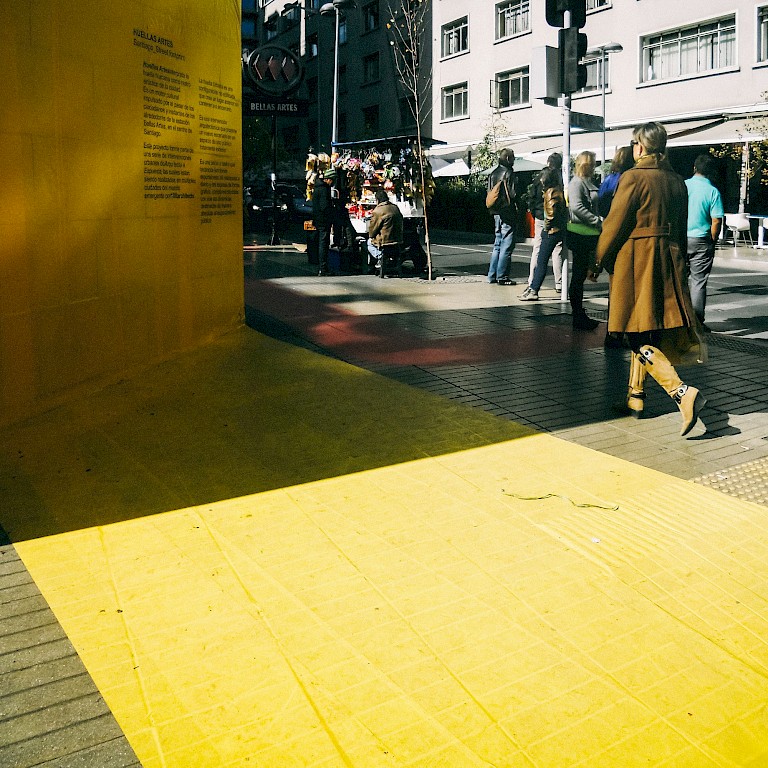