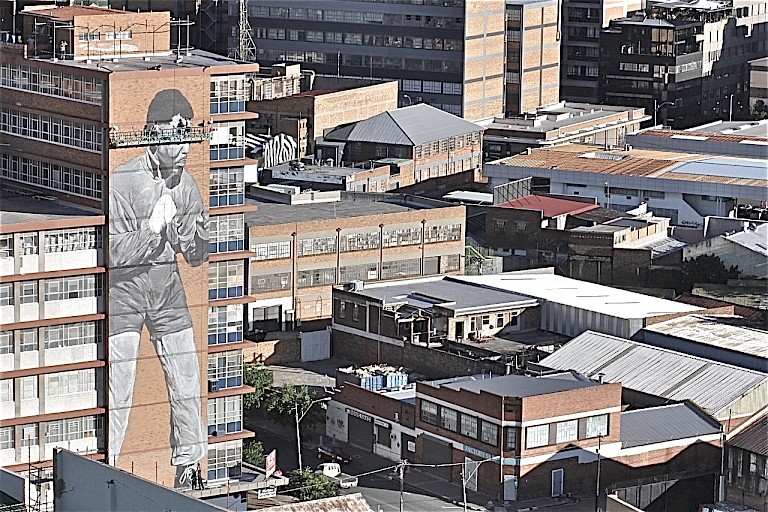 I Am Because We Are

ARTIST: Ricky Lee Gordon
ARTWORK/YEAR: I Am Because We Are (2013)
REGION: Africa
RESEARCHER: Fabio Vanin

Ricky Lee Gordon is a South African street artist best known for his massive murals. He used to work under the pseudonym Freddy Sam for many years. 40-metre tall Nelson Mandela tribute that represents the iconic image of him boxing as Mandela believed all were equal in the ring. The mural is inspired by Madiba’s definition of ‘Ubuntu’ which is ‘You cannot be human all by yourself’. The wall is not to far from the rooftop where this image by Bob Gosani (copywrite by the BAHA foundation) was taken. Project coordinator Bheki Dube says the image of Mandela, is very close to and faces the direction in which the photograph was taken. The use of the image had been arranged with the Bailey African History Archive (BAHA) and the artist’s family according to Dube.

The area was derelict and the use of the mural has attracted a younger crowd into the urban centre, leading to dual effects: the regeneration of the area and gentrification processes. He decided to paint the iconic image of Madiba boxing on a city rooftop. “He (Mandela) believed all were equal in the ring. Also this wall is not to far from the rooftop where this image was taken, Freddy Sam explains. “I was so honored when permission was granted to me to paint the mural using the original photo taken by Bob Gosani.”The painting commenced shortly after Madiba’s passing and took approximate four days. Due to weather and technical difficulties the final completion was delayed until early in 2014. Mandela once commented, "I did not enjoy the violence of boxing so much as the science of it. I was intrigued by how one moved one's body to protect oneself, how one used a strategy both to attack and retreat, how one paced oneself over a match. Boxing is egalitarian. In the ring, rank, age, color and wealth are irrelevant. When you are circling your opponent, probing his strengths and weaknesses, you are not thinking of his color or social status.” And so we can see how Nelson Mandela, thought about how to free a nation from its inequalities in everything he did.

Gordon took on the challenge proposed by property developer Jonathan Liebmann to paint the huge mural on a newly purchased building in the Maboneng District just east of Johannesburg. Liebmann hopes the mural will inspire the entire community to live with the embodiment of the values of who he believes to be the world’s greatest leader. “As we continue to transform the built environment, it is our hope that we will see many other people jump on board to be part of positive change in Johannesburg”. With the reach of the tallest mural in the city, Gordon hopes that the mural will be experienced by and communicate with people from all walks of life. “I believe that creativity is part of the change. My intent is to inspire, through art”.The piece can be seen driving on the M2 highway going east as well as on Joe Slovo, peeking over the shorter buildings. The mural is situated on the corner of Staib Street and Beacon Road just east of the Johannesburg CBD.

The artist did graffiti for many years, before he became interested in painting figurative murals with spray-cans that opened his eyes to new muralism techniques. Inspired by the work of artists like Franco Fasoli aka Jaz from Argentina and Waone and Aec of Interesni Kazki duo from Ukraine, he decided to stop working with spray paint and began to use brush only which had a great effect on his work. It also led him to be interested in classical oil painting which he picked up a few years later. In 2015, he had a residency at Everfresh studio in Melbourne, Australia, where he met Rone, one of the studio artists who shared a large-scale mural scaling technique with him that has since dramatically helped the artist to execute his mural work more effectively.

Gordon seeks to highlight relevant social issues within the context of history and nature. His public pieces aim at having a meaning to the community who will live with the mural and to represent a universal idea that everyone can identify with and be inspired by. The area was derelict and the use of the mural has attracted a younger crowd into the urban centre, leading to dual effects: the regeneration of the area and gentrification processes.

Gordon took on the challenge proposed by property developer Jonathan Liebmann to paint the huge mural on a newly purchased building in the Maboneng District just east of Johannesburg. 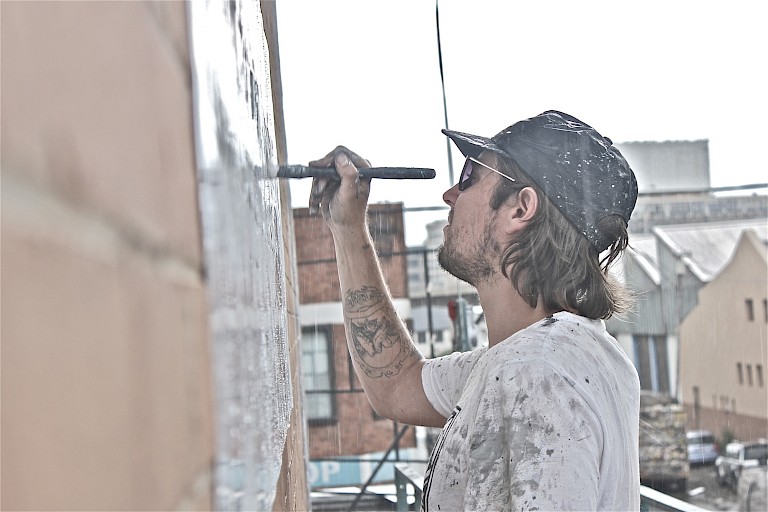 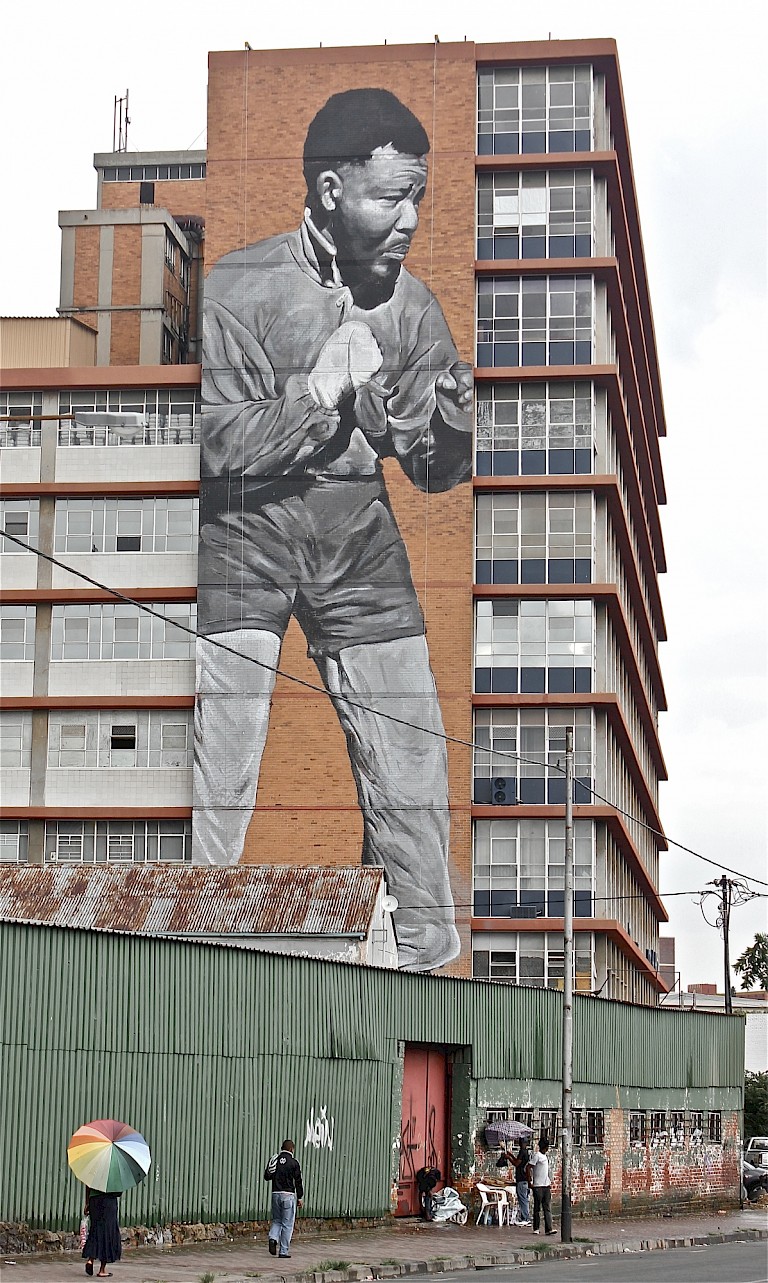 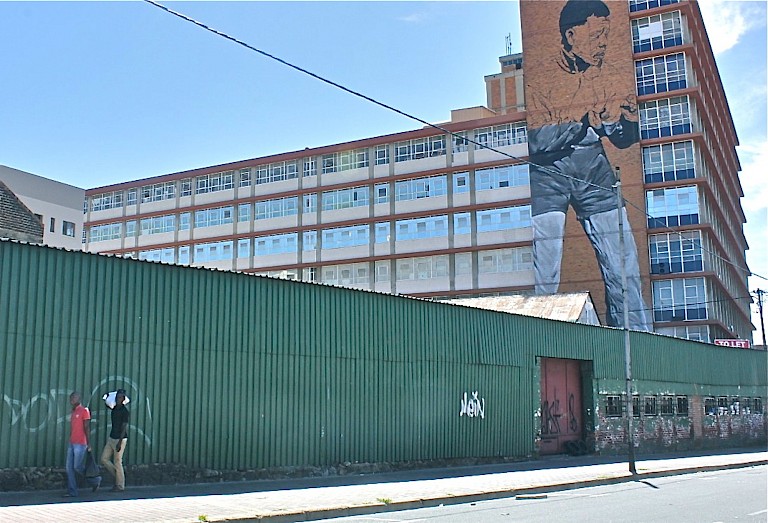 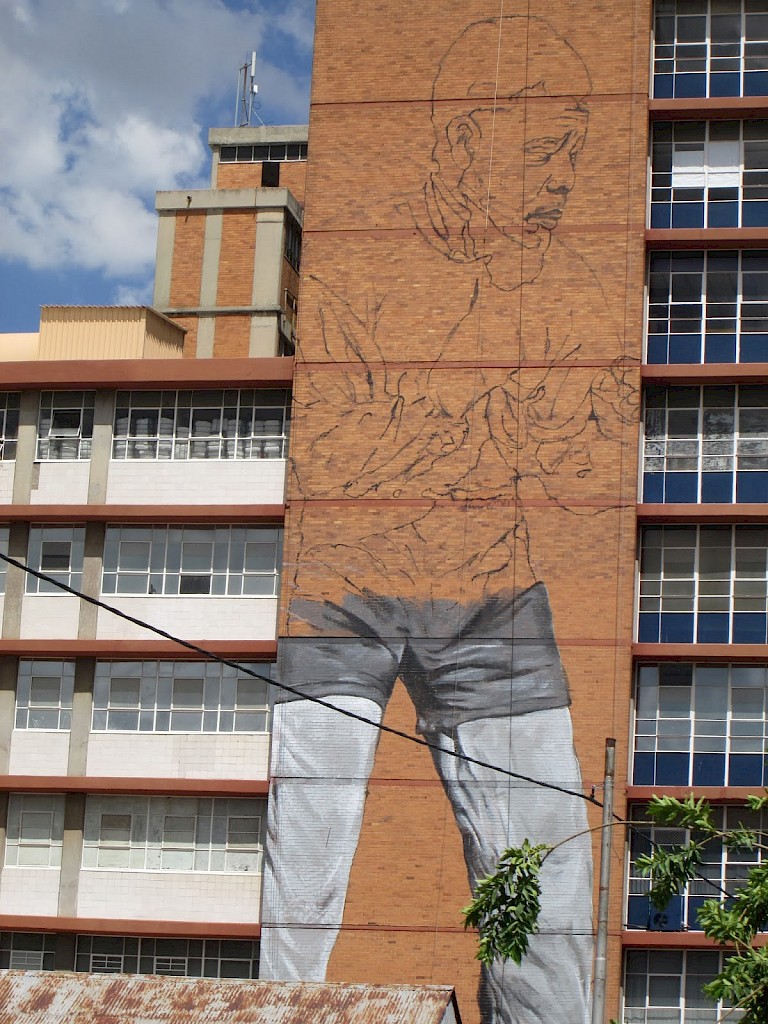 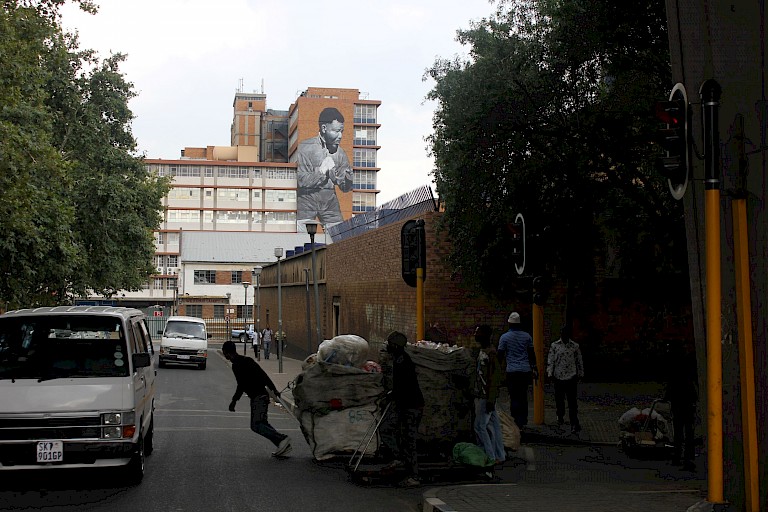 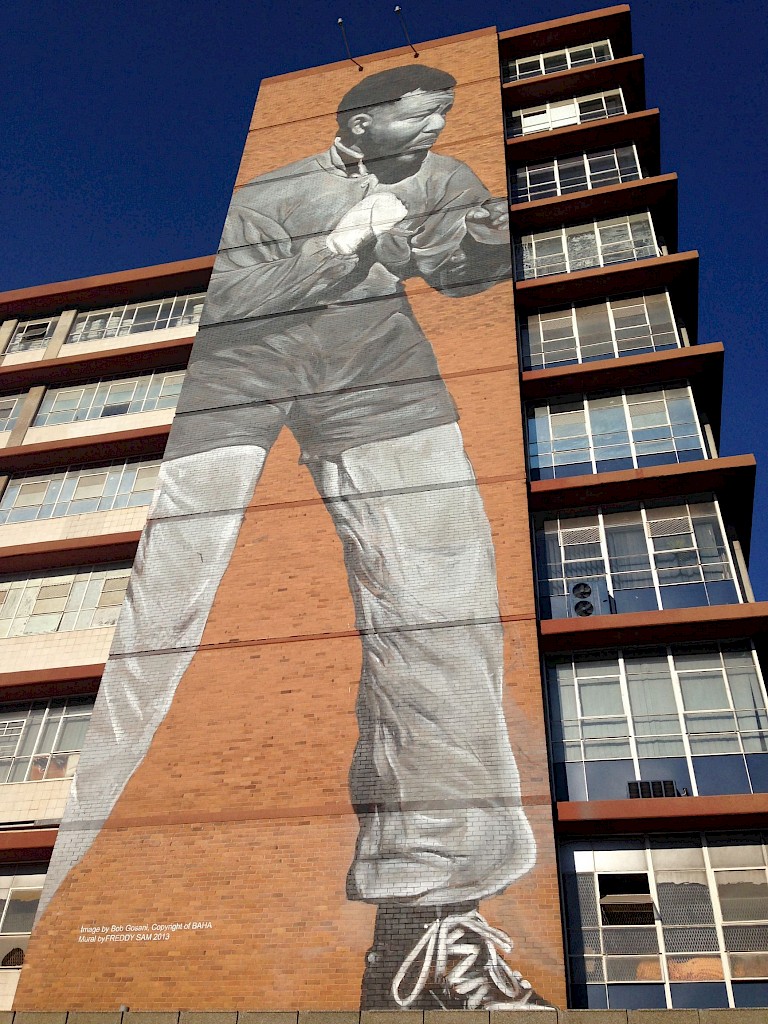