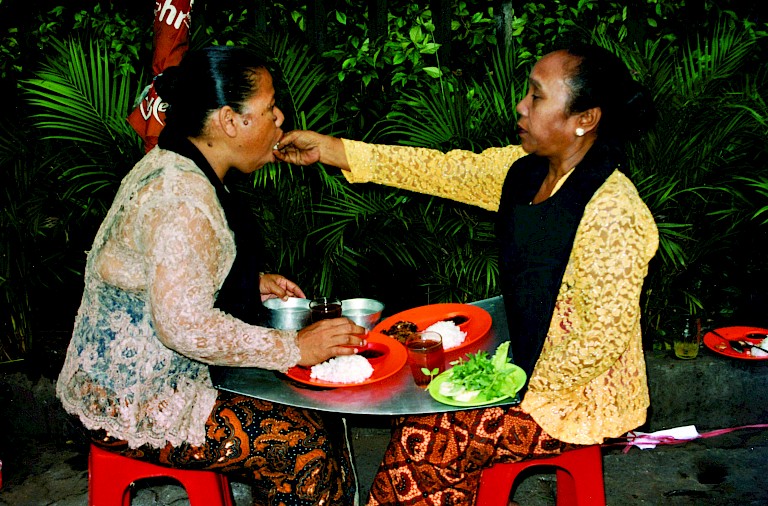 I Eat You Eat Me

I Eat You Eat Me is a series of participatory performance using an ordinary meal as medium to invite sharing with and caring for the other. The work spanned over ten years, beginning in specific political circumstances in ordinary local lives, and travelled to more art-specific contexts such as museums and art festivals. To participate in I Eat You Eat Me, one is typically entering a restaurant or an area of street food stalls with a companion. The artist would greet them with the idea of the work, ask for their consent to participate in it, and with it, the work begins. In the Chicago SMART Museum iteration, a group of six persons became the variation of the rule. Each person has to wear a sculpture shaped as a bib and a table top, and instructed to imagine what the other would like to eat, choose the food for him or her from the restaurants’ menu (depending on local conditions, food is chosen at times from what’s available in food stalls already operating on site, for instance, in the case of Yogyakarta. Each person would then feed his/ her partner throughout the entire meal. There are variations in the styles of feeding, with utensils, or at times, feeding requires putting one’s hand into the other’s mouth. To articulate the complexity and transformative power of I Eat You Eat Me, it is important to bring in its precursor, the series Pribumi, Pribumi (1998), marking the beginning of the artist’s use of the meal as a hinge of social engagement.

I Eat You Eat Me begins with a common human need – eating to sustain life. It complicates it by turning the self-directed goal into a shared one in social life. In every step of the participation, each person is led to move from the familiar to the strange – from reacting to a need or a want, to actively making choices, potentially involving moral reasoning, based on varying degrees of uncertainty about who the person he or she is feeding is as a full human being. A simple activity of eating to survive brings out questions about the well-being of oneself in relation to others: each being fully immersed in a society with a diversity of ethnic, cultural, political and religious expressions. There have cases where empathy and hospitality failed – for instance, as Jaarsma recounts, one participant wanted ice-cream for himself so much that he ordered it for his partner. However ordinary the kind of hospitality the work invites from the participants, it turns out at times that these conditions of living together have been taken for granted. Beyond the immediate setting of the meal itself, this work is conceptually powerful in that it carries the capacity to reveal invisible boundaries that organize social life that often constitute contention and conflicts in, I propose, three particular ways. First, it evokes and engages the traditional with and within the contemporary – the ritual of feeding in weddings is at the heart of Javanese culture, as Jaarsma finds out. It is also present in some Hindi communities. I Eat You Eat Me brings the ritual across cultures, implicating participants in the mixed traditions and creative processes of remaking traditions. Second, the work travels and in doing so, allows ideas originating in one culture to cross and cross-breed into another.

The goal is not to erase local meanings, but to allow for one local to encounter another, so that the potential of seeking the common good is kept alive. In Chicago, participants have testified to how the meals helped them leverage rituals and talk about things they don’t normally do in daily life. The work, in this light, creates opportunities for peace based on ‘radical hospitality’ (as the sub-title of the Chicago group show iterates) as peace for good, not only peace as the absence or suppression of conflicts or dissent. Third, the work is a place-making one by turning routinized zones often inhabited as offering ‘harmless’ interaction or convenient consumption, into spaces for thinking and critical engagement. In foregrounding such materials as human skin and saliva – anthropologically studied as markers of danger, contamination, and psychologically the fear of the Other (as in Mary Douglas’ idea of Purity and Danger), I Eat You Eat Me questions how the stigmatization of such conditions of human life might have been the source of human alienation. In the work, these conditions are presented as ambiguities, uncertainties, and complexities, qualities of public space that are often devalued or sidelined in the name of security. In requiring participants to not only imagine of the other as immediate, chosen companion, but also the unimaginable, radical Other, who may be stereotyped as one’s antagonist, or generalized as whatever that one fears, the work sets up, even if tentatively, the conditions for equalizing the host and guest, by making them both at the same time, calling for a truce of contesting power so that new spaces of negotiation could take place.

The year 1998 – 14 years into the artist’s residence in the country – was a turbulent one in Indonesia, with riots against the authoritarian Suharto regime leading to the President’s resignation. The artist’s personal reflection on her relation with the way Indonesian politics gradually unfolded – she found herself wanting to be involved with the imminent changes in society: a mixture of demands for freedom, ethnic and religious tension, memories of the colonial history of the nation, etc., while also radically questioning her right in commenting on struggles in Indonesia as a Dutch person, Indonesia’s colonizer in the past. The relation between Pribumi, Pribumi that took place in 1998 presents both continuity and rupture. In Pribumi, Pribumi, the artist frying some 200 frogs legs on the streets, inviting anyone willing to sit down for a conversation with her and with each other. Politics at the time included hostilities towards and systematic oppression of the Chinese, with which the Muslim population were involved. Frog legs were the diet of the Chinese and not Muslims. To invite the majority population to have a taste of what their ‘Other’ was like by eating the Other’s food is a gesture towards a will for understanding, if not yet resolution or reconciliation. Pribumi, Pribumi is therefore more direct action, involving the politically concerned artist. I Eat You Eat Me was created 3 years later.

The artist herself was not involved in the feeding and the meal, but curated the experience for the participants. Compared to Pribumi, Pribumi, it is more open-ended in terms of what concerns or ideas might come through the feeding. But it is no less demanding on the participants to imagine each other as full human beings, making choices for them that potentially involve moral reasoning. The work had taken place in Bangkok (Thailand) for the first time in 2002, Jakarta (Indonesia), Sollentuna (Sweden), Yogyakarta (Indonesia), Chicago (USA), Houston (USA), Ohio (USA), Kalgoorlie (Australia), and Venice (Italy) most recently in 2018. For this case study, the focus is on the iteration in Chicago in 2012, under the rubric of the project FEAST: Radical Hospitality in Contemporary Art, curated by Stephanie Smith. [1] Smith, then Deputy Director of Smart Museum, writes of how participant James Levinsohn reflects on power relations as a result of the mean: “In enacting Mella Maarsma’s piece, I experienced feeding another person and being fed by another person for the first time in my adult life...In Jaarsma’s piece, our proximity to those we have power towards makes us generous; one wishes this was the case more often outside of art.” [2] While I Eat You Eat Me could be regarded as a self-sufficient work in a particular place, its reach accumulates over time since Pribumi, Pribumi, enabling the reflection of ‘place’ as sharing common boundaries the artist designates while also allowing for the particular transgression of those boundaries, opening them up to let in particular voices. The fact that it has been travelling testifies to how the work is adequately open in content and form to carry both local conditions and ideas beyond them.
[1] https://www.uchicago.edu/features/20120430_feast/, accessed June 19, 2018
[2] http://mellajaarsma.com/articles/?ccm_paging_p_b105=1, accessed June 19, 2018 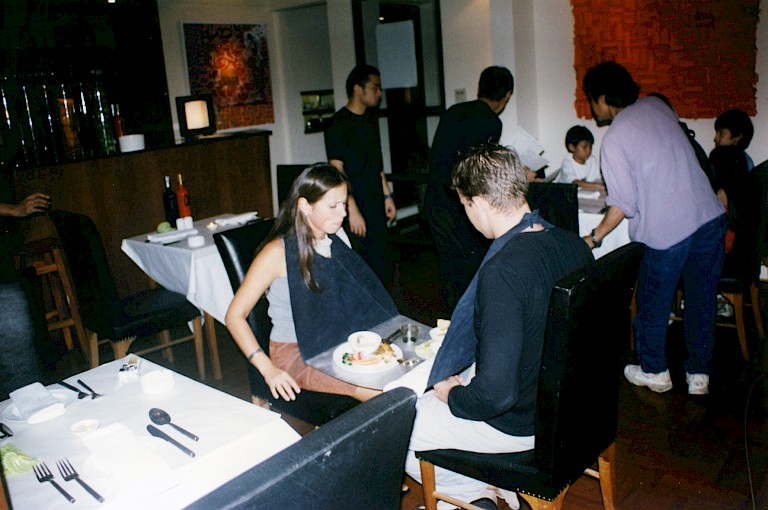 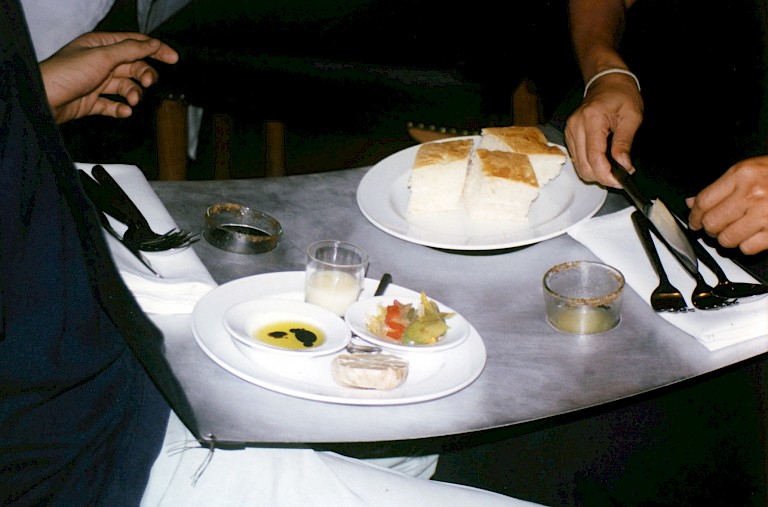 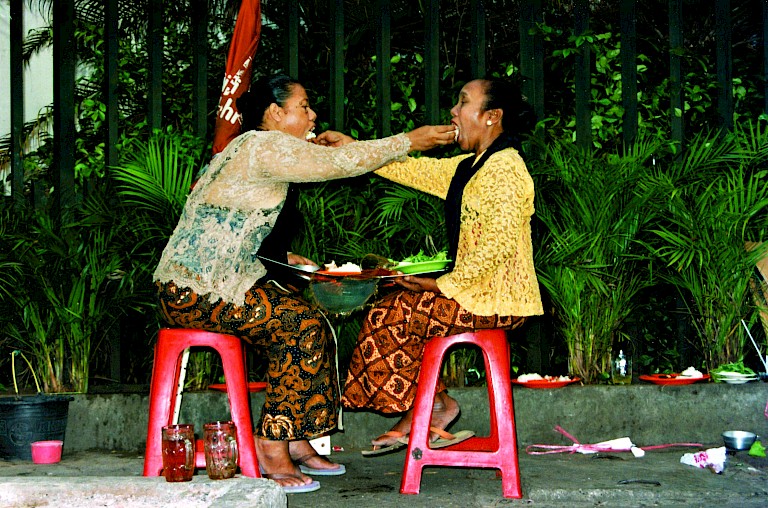 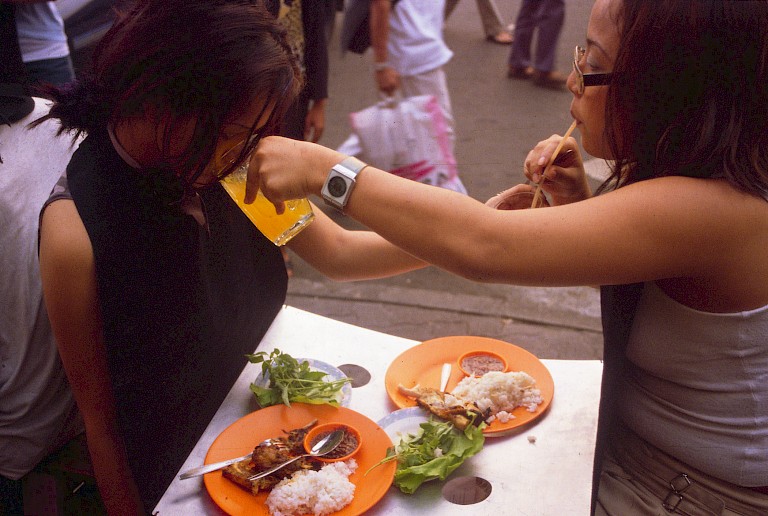 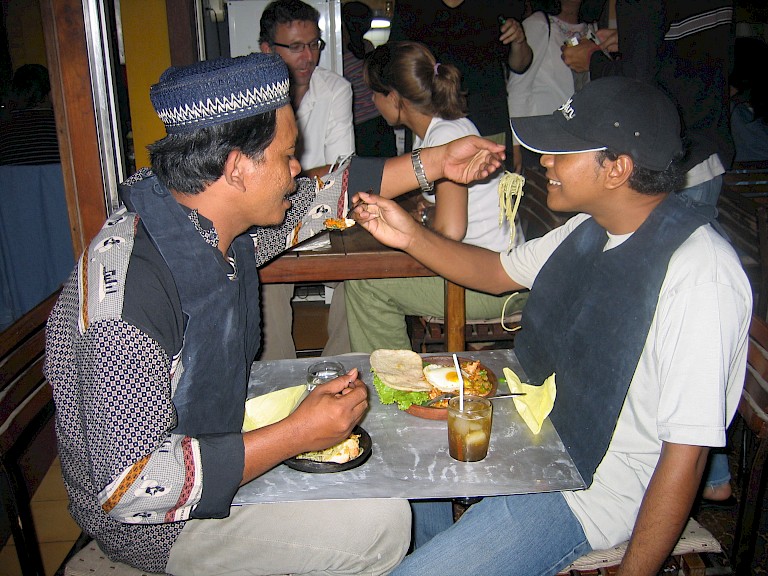