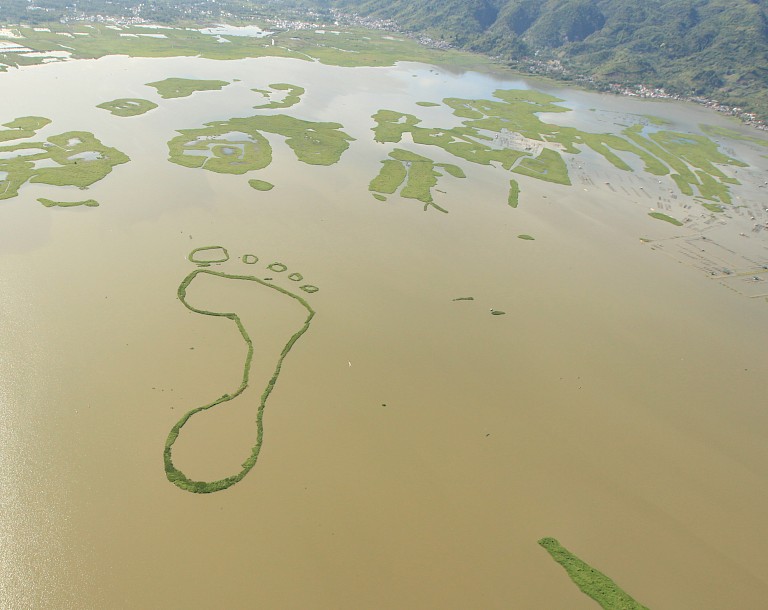 A land art project formed by a massive conglomeration of water hyacinths visualized as a giant foot print that is situated in the middle of Limboto Lake, Gorontalo, Indonesia presented by a Gorontalo-born artist witnessed the environmental destruction of the aforementioned landmark as time passed by. The institute of Environmental Research and Technology (Balihristi) of Gorontalo province stated that the sedimentation of Limboto Lake has reached approx. 5.300 tonnes annually due to the deforestation situated in the headwaters that caused the growth of water hyacinths as the depth of the lake has been diminished to 2.5 metres in 2013 during the dry season. Furthermore, experts have predicted that the lake will become shallower and caused the ecology to become further in critical state and no longer be able to further supply clean water to local floras and faunas as the land will dry out in 2025 thus further endangering the surrounding wildlife.

Reasoned by this concern, the artist begun a movement for the people of Gorontalo to become more aware of the situation by taking a foot print symbol from Gorontalo folklore about a young man, Lahilote, who one day stole a scarf from an angel that was bathing in Limboto Lake with the intention to prevent her to return to heaven so he could marry her. Unable to return, the angel married Lahilote and stayed on Earth. One day the angel managed to find the stolen scarf and soon after returned to heaven. Lahilote tried to meet his wife in heaven by climbing a rattan tree. His stay in heaven caused him to feel back to earth and his fall shattered his body into two pieces; one side of the foot in the coastal village of Pohe and the other in the village of Botuliodu. Furthermore, the artist also utilizes the foot symbol to get his point across by indicating that the shallowness of Limboto Lake that it is no longer deeper than the foot print of Lahilote.

For the creation of this project the artist collaborated with some of his fellow artisan from Java alongside with the local fishermen and it took them four months to prepare the water hyacinth that are supported by over half million bamboo stems that are installed at the bottom of the lake followed by using water hyacinth filled stems as the sketch.

As previously predicted the project raised lots of buzz from news and media especially those that focus on environmental awareness that caused the increase of funding of Limboto Lake conservation. Fellow artist and organisation are inspired in creating further art form such as film and artwork about Limboto and also events within the lake.

The artist has self-initiated a large scale project consisting of 500 x 190 meters of water hyacinth without any assistance from the local government and the project was funded by providing commission of work to an event organizer for arts and literary in Surabaya in forms water hyacinth logo. In his limited time and resources the artist has successfully created an art form that is accessible to be seen by the people of Gorontalo that also has created impact that reach beyond the local community.

The project was triggered by his concern about the environmental damage of Limboto Lake and he created a massive land art in response to the issue by using local folklore to gain people awareness about the lake condition.

He initiated the project by performing a location survey using Google Earth and studying the conglomeration of water hyacinths that were existed in the lake. He used the bamboo stems as a sketch and stuck them to the bottom of the lake before filling them with water hyacinths via motor boats. The biggest challenge of the overall project is by using water as a medium as no marks can be utilized in the surface hence the difficulty in determining the proportions and accuracy of the image.

The biggest contributor of this project is Henkpublica, event organizer for arts and literary in Surabaya, Indonesia, that has commissioned a logo creation that utilise water hyacinth as the medium. Additionally art collectors, local communities, and alumnus have made substantial contribution for the funding. 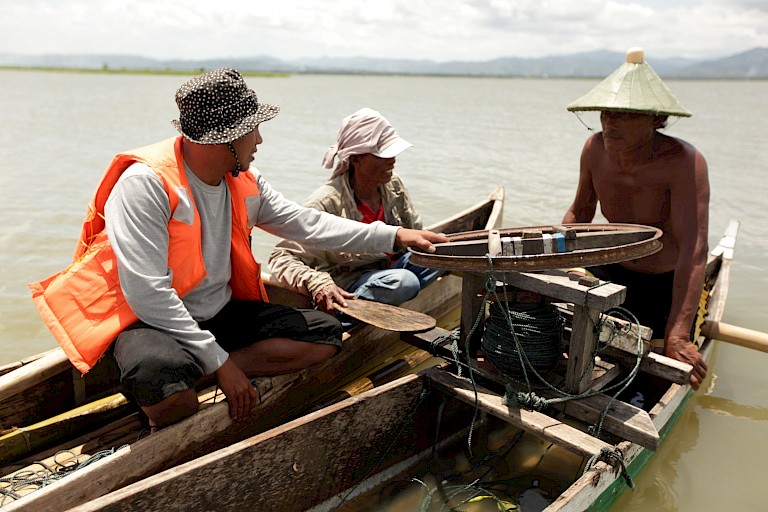 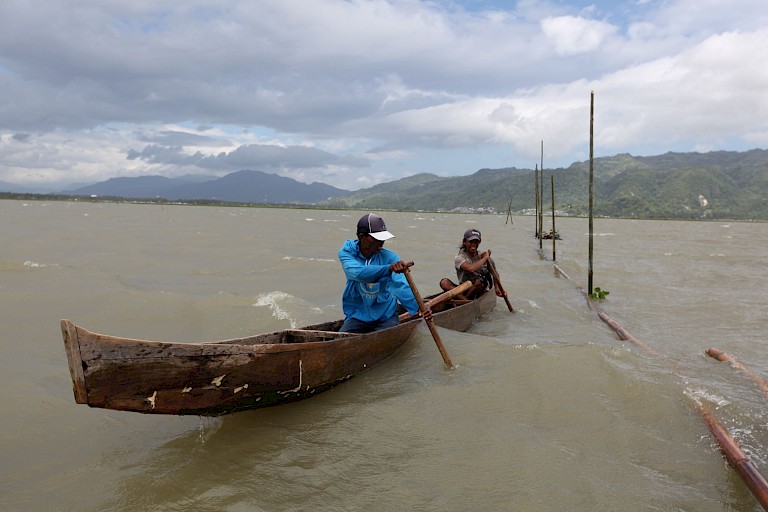 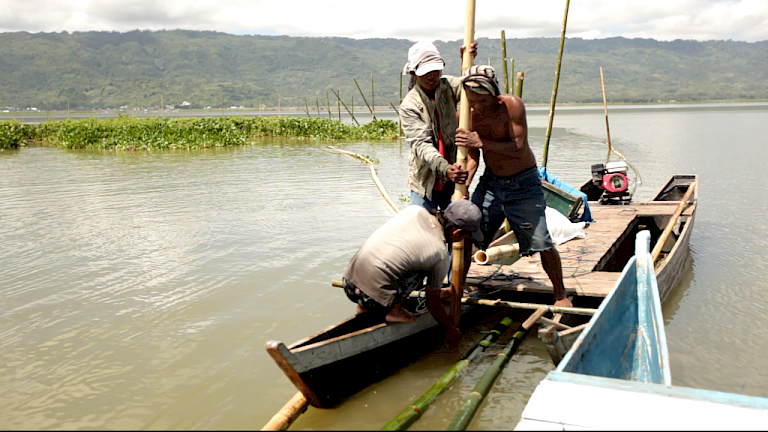 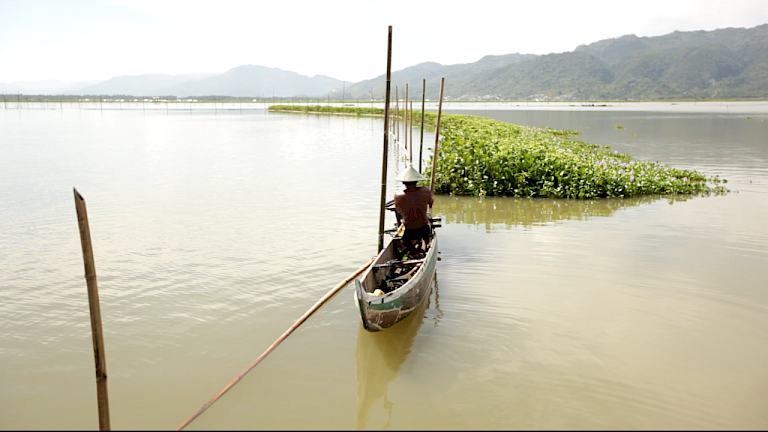 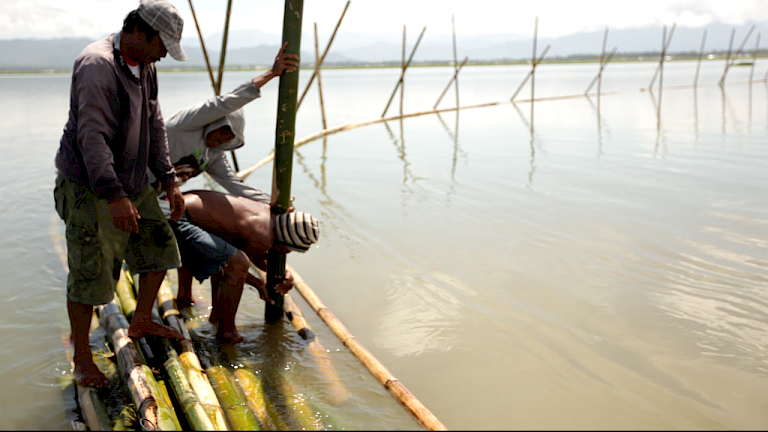