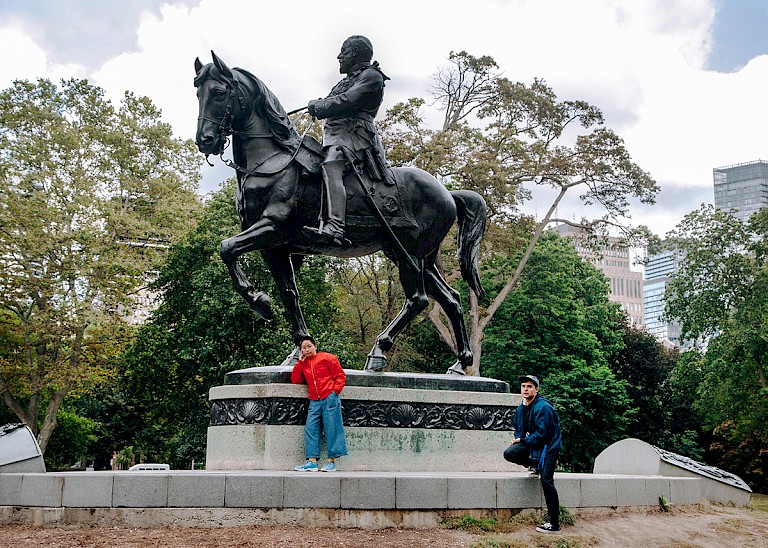 Life of a Craphead, a collective of two Canadian artists, produced King Edward VII Equestrian Statue Floating Down the Don River, a site-specific sculpture and performance that took place in Toronto in 2017. The work’s prescience was in addressing the contentious topic of colonial monuments in public space—a weighty matter approached with wit. The work was initiated by the not-for-profit organization Evergreen Brickworks as part of their public art series. Additional support for presentation was provided by the Don Valley River Park, where the performances took place, and other municipal entities, also not-for-profit organizations. The effectiveness of the work can be encapsulated by its seeming simplicity, to discard a symbol of power that no longer serves the public, a typical joke, casual in nature, about trashing tons of steel made real. With this act, the duo revealed a history that connects present-day Canada with colonial India and the lasting attitudes that support the continuation of Western colonialism.

Life of a Craphead’s King Edward VII Equestrian Statue Floating Down the Don River is a sculpture animated by performance. The project was commissioned and presented by the Evergreen Brick Works Public Art Program and curated by Kari Cwynar. The work was presented at the Don Valley River Park in four performances, that floated the sculpture down the river, in October and November of 2017.

The series of performances involved dropping the life-size replica statue of King Edward VII into the Lower Don River, Toronto. From there, the sculpture made its way down, between Riverdale Park and Queen Street. The same action was repeated for each performance. Viewers watched from the side of the river and the bridge overhead and could follow the statue along its journey.

In Queen’s Park, Toronto, the site of the Ontario Legislative Building, sits a 15-foot bronze equestrian statue of King Edward VII. The statue was originally erected in Delhi, India in 1922 to commemorate King Edward VII’s historic role as the Emperor of India. After independence in India, the statue was removed, and placed in storage. Years later, Harry Jackman a prominent wealthy Torontonian and former Member of Parliament financed its transportation from Delhi to Toronto in appreciation of its craftsmanship. He was able to have it placed on public property, in Queen’s Park in 1969 despite public outcry and criticism. This odd story of provenance was the artists’ inspiration, provoking them to reveal somewhat forgotten histories and the influence of the wealthy, white and powerful that continue to shape Toronto’s public space.

The artists’ performance created the illusion that this statue, a symbol of subjugation and prize of the priviledged, had been “dumped” in the Don River. With both humour and a sharp critical eye, the project addressed the persistence of power as it manifests in public art and public monuments – symbols that are often preserved in perpetuity, even when the stories we want to celebrate change. 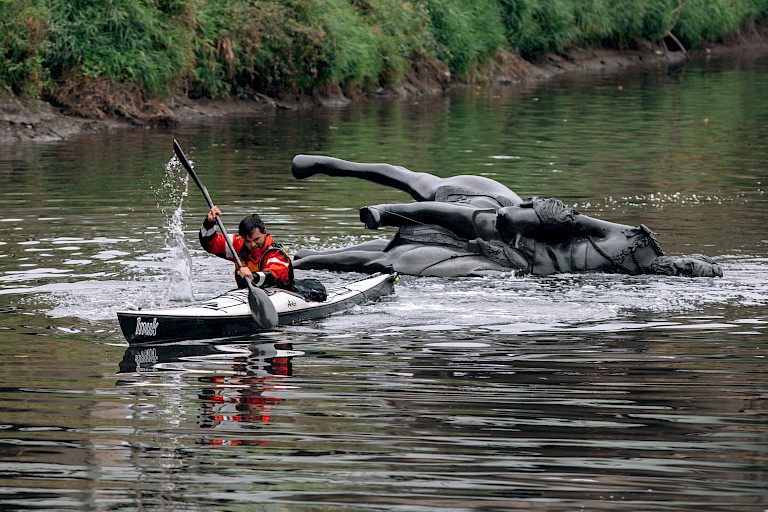 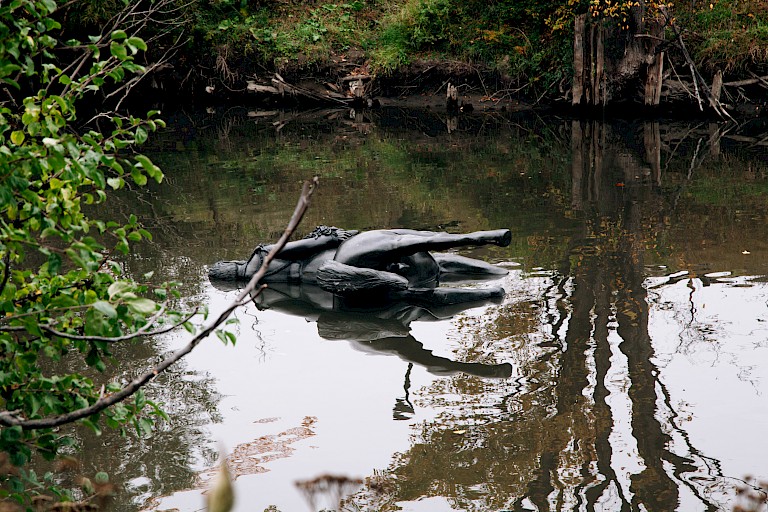 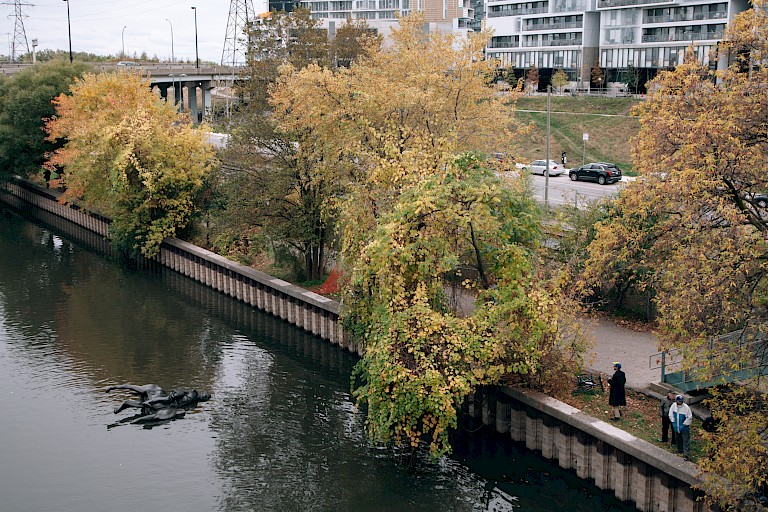 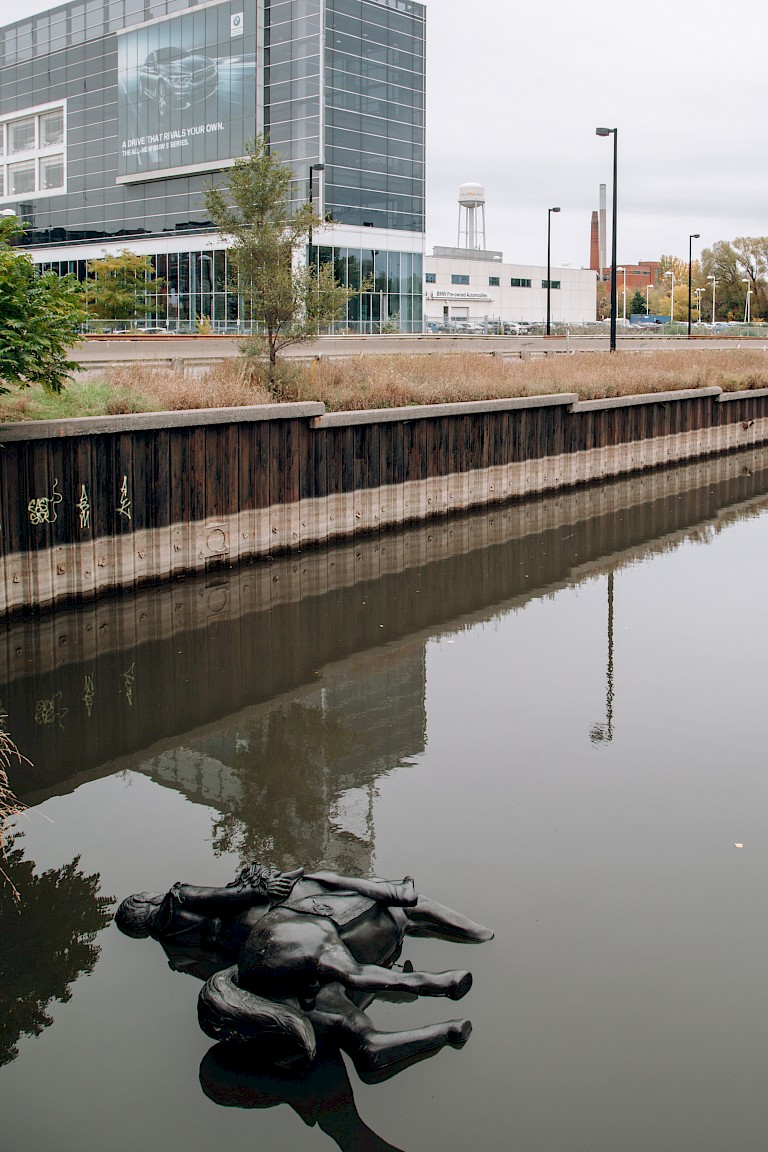 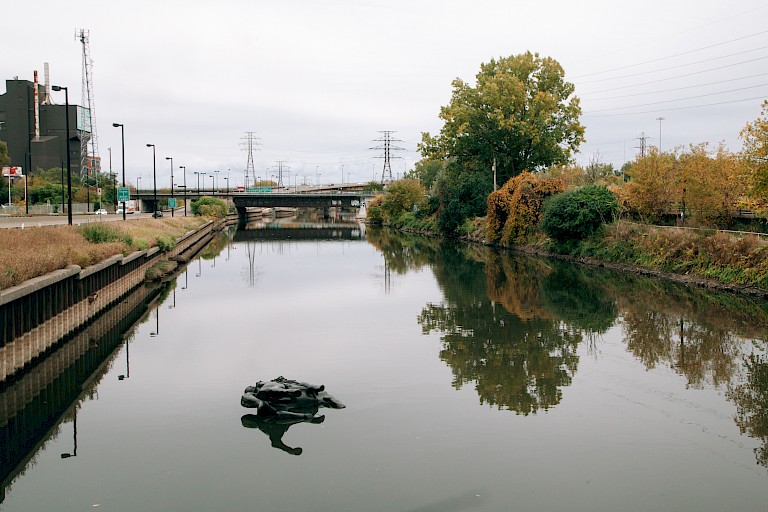