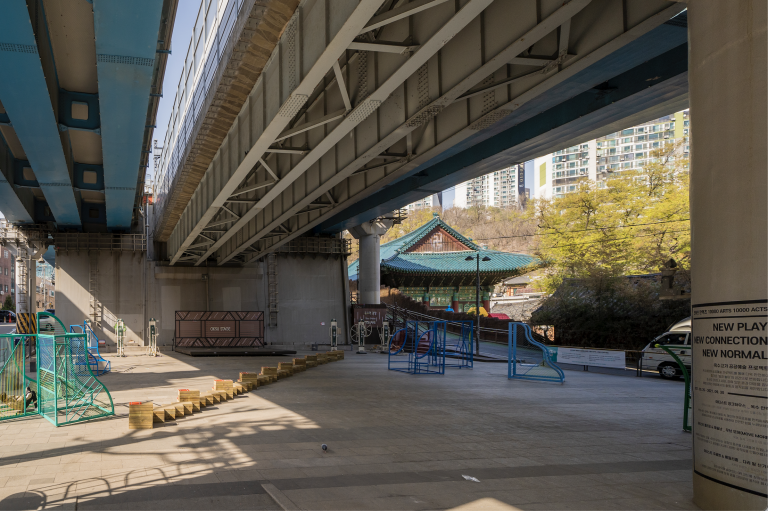 The foundation underneath Oksu metro station was used to be a place where the local community could rest and hang around before the pandemic time. Now it became a dead place with emptiness and quietness. Furthermore, it became someplace where people feel unsafe to be. With the new measurement and social fear of gathering, can the public space still safely play its role for the community? The project <New Play, New Connection, New Normal> seeks alternatives to that question through three different artistic approaches.

First of all, <Oksu Comfort> is an installation work by ‘Junk House’. <Oksu Comfort> are six modules that are designed according to the Covid measurement. Unlike the usual public benches, it is designed to sit in distance to minimalise the risk of infections. Each module has about 2 meters seat with strings on both walls which show an intermediate status of open and close. 4 of them are designed for one person seating and 2 are bigger for people with their companies.

Secondly, collective artists ‘Jelly Jang & Tassel Nam’ created <Move More> which consists of 51 wooden modules across the square to draw movements from visitors. Those 51 modules change their spots every 40 days for 6 months so that invite the local citizens to walk around the square along with different patterns. Starting as one big row across the place, <Move More> disperse in distance and decentered spatial recognitions. The artists do not supposedly define a specific function of their work. It can be a little sitting area, sporting equipment to step on and off, or merely nothing rather than obstruction depending on how each visitor sees them. In that way, it leaves some space for visitors to be creative.

Lastly, performance and sound artists ‘Hae Young Joo’ and ‘Baily Hong’ present a dance video <Mirage underneath the bridge> via QR code. The artists pay attention to the diminishing extensity that people are experiencing during the Covid, and choreograph based on the shared desires for freedom of travel and the old ordinary days. In the video, the choreographer Joo travels to 4 different spaces through her movements, along with the soundscape of Oksu by artist Hong inducing the viewers to be immersed in expanded space, away from reality. They created 4 chanels with different themes; <In my room>, <Underneath the highway bridge>, <To the east>, <International Space Station>. And each video is available to watch by scanning QR code posters distributed throughout the square. The videos consist of showing little movements that encourage viewers to move around <Oksu Comfort> as well as <Move More>. 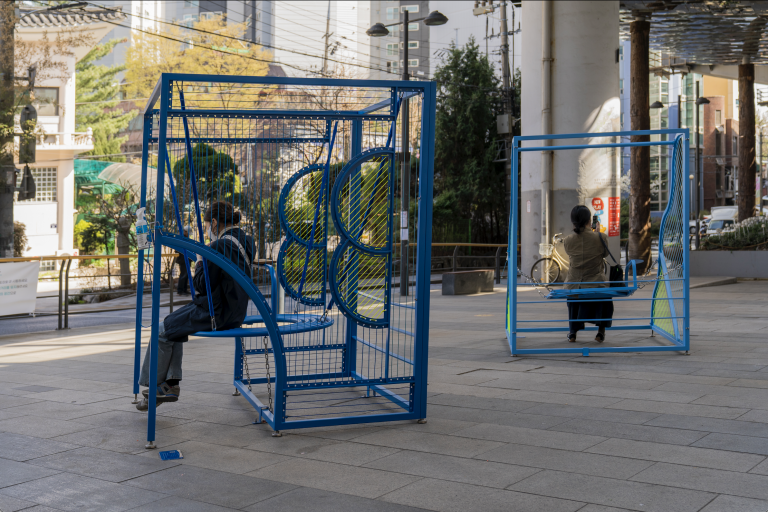 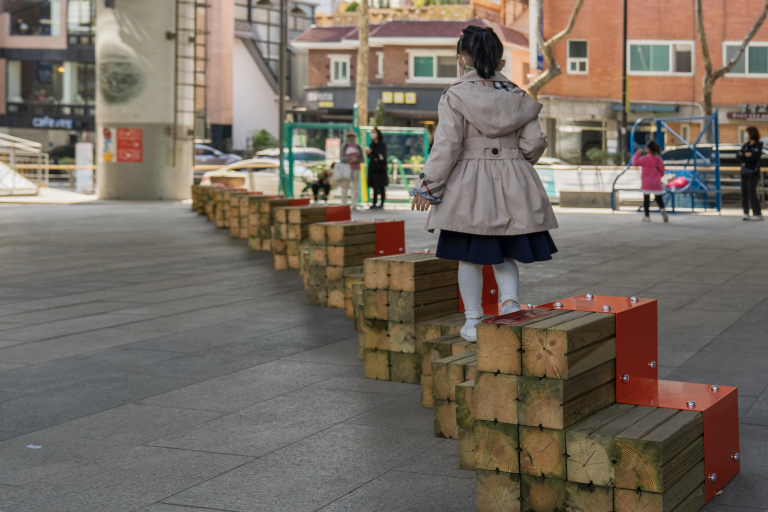 ‘Junk House’ is a street artist. “Everything that exists is a living, breathing organism, regardless of size or material.” She interprets improvised imaginations or forms of form as fleshy organisms and thinks that having the image come alive is the same as giving life to the place.

Jelly Jang and Tassle Nam are interested in solving public problems and work on a guerrilla design that directly induces a change in behavior.In particular, public design workshops are held so that citizens can sympathize with problems and express ideas together. It is characterized by presenting an open type of work in which to participate and exerting the power to induce change.

Hyeyoung Joo traces how the body, closely connected with the flow of society, responds to society and demonstrates what movements. At the same time, we are researching with the goal of discovering a new body, that is, presenting a new movement that we will face in the future. Sound artist Bailey Hong interprets and records the time and space he encounters with musical language. Based on electronic music, he has been working across genres, paying particular attention to the sound that contains and reconstructs places and spaces. On the way to meet, etc.

‘1000 arts 1000 acts’ plans place-making projects for dead spaces underneath highway bridges in 3 different districts of Seoul, South Korea. Each project invites a designer group, installation artists, and performance artists for its various contexts. Corresponding to the new normal of the Covid era, they explore a new form of community and the publicity in art. The project <New Play, New Connection, New Normal> takes place in 2021 in 3 foundations of Oksu, Hannam, Emun districts in Seoul. As a start-off, they firstly conduct a project to suggest new ways of playing in the public space within the social distancing in Oksu where the foundation is in a form of a small square. The project consists of on/offline projects including playful installations of collective artists ‘Junk House’.

<New Play, New Connection, New Normal> is planned by a public art company ‘10000 art 10000 acts’ to conduct in foundations of 3 different districts in Seoul where are considered to be dead space. ‘10000 arts 10000 acts’ have their best interests in presenting the social issue through their projects based in Seoul, Korea. The first part of <New Play, New Connection, New Normal> took place in Oksu from March to June of 2021. The project was funded by Arts Council Korea.

Ever since the Covid, research shows that majority of people are experiencing not only physical but also phycological difficulties. Moreover, the suicide rates of young females in the past year in Japan and Korea have been drastically increased. This social phenomenon does not merely stay as a personal issue, but also extends to the society with hatreds or aggression towards other people. Under those circumstances, the project re-evaluates the value of outdoor activities and invites the local citizens to rest and move around the square along with various artworks. In terms of art, it explores alternative ways of public art within certain limitations and suggests how art should play its role in ongoing issues.

<New Play, New Connection, New Normal> actively reacts to a drastic change of society and reflects it on the context. With a quick response to the common issue, ‘10000 arts 10000 acts’ emphasize their willingness to suggest solutions. As a result of that, the project welcomes the local citizen to their square to enjoy a little walk and sitting and comfort them in an artistic approach with a playful context.

They also practice in different ways after making contacts and associating with the local administrative for each place to take account of its cityscape and locality.