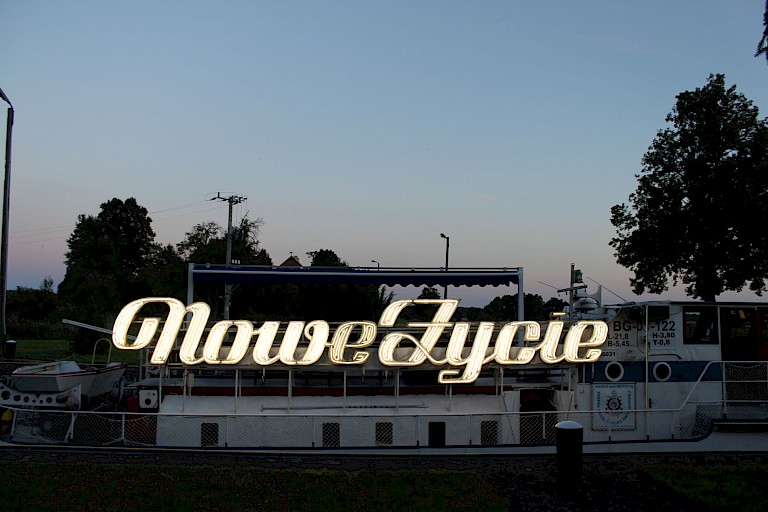 In 2005, in Trzeciewiec, a small village near Bydgoszcz, in the north-west of Poland, Elżbieta Jabłońska found an old neon sign in the form of an inscription «Nowe Życie» («New Life»). It was mounted above the front of a small building belonging to the Agricultural Production Cooperative — the inscription was the name of the cooperative that had been created in the 1970’s, when «new life» in Poland was understood as a new communist world. After 1989, when the Polish People's Republic was replaced by the Third Polish Republic, the ideas changes, and numerous agricultural cooperatives were closed, but the sign survived. Four years after discovering it, in 2009, the artist was finally able to obtain it in the form of scrap metal.

During the following months, she had the electric parts replaced and the whole piece restored — in order to show the sign later in different spaces, configurations, and contexts. Since 2010, the neon «New Life», as an eponymous artistic work, has been traveling from place to place and initiating new events. The object has also been exhibited in various institutions, galleries, and museums — always marking them with its meaning, starting a cycle of changes in these places, or celebrating the change that has already happened. So far, the gigantic ten-meter light installation has been shown in thirteen different contexts. In August 2014 «New Life» was installed in Xawery Dunikowski Park in Warsaw. The park is located around Królikarnia (literally, «The Rabbit House»), an 18th century classicist palace that was completely destroyed during World War II and reconstructed in 1964 — and Elżbieta Jabłońska placed her work there as a call for protection of the heri of the site for arts and of the lively urban public area at the same time, in contrast to the environment for which the sign had been created initially.

In Lublin, the city in the east of Poland, «New Life» was placed in the so-called Theatre Under Construction, that had remained unfinished for many years — later the building got completed, currently hosting the Centre for the Meeting of Cultures (Centrum Spotkania Kultur). In Bytom, a town in the south of Poland, «New Life» was installed next to the former mine — there, it was a core piece of the participatory project that involved local children. In Gdańsk, the port city in the north of the country, on the Baltic coast of Poland, the work was placed in the shipyard. In July 2016, the neon sign was taken on a journey to the exhibition «Common Affairs. Revisiting the Views Award — Contemporary Art from Poland» prepared by Zachęta Narodowa Art Gallery, Deutsche Bank KunstHalle and Polnisches Institut Berlin. The work was transported by the International Waterway E70 from a small river port in Nakło nad Notecią to Berlin on the ship called Łokietek that belonged to the School of Inland Navigation in Nakło. The six-day trip was presented as a symbolic artistic act and thoroughly documented. The film «New Life», created in the process, is a 45-minute observation of the changing landscape, seen from the perspective of the river, forming a spontaneous, sensational record of the journey.

After the return from Berlin, «New Life» became the core of artistic workshops held at Teatr Powszechny in Warsaw that had earlier hosted the installation on its territory. The main goal of the programme titled «New Life — Public Improvisation» was to create a space for cooperation between young artists (students of the Warsaw Academy of Fine Arts) and people from marginalized groups. Recently Elżbieta Jabłońska has assigned the money received from the acquisition of the installation by Nomus, the Museum for Contemporary Art in Gdańsk, for the construction of a small house on the bank of Wisła river. The artist is planning to use it as a place for residencies, intimate concerts, shows and exhibitions, both for the rural community and for outside visitors. Elżbieta Jabłońska considers the white neon on an old rusty construction to be a symbol of revival: «The title «New Life» does not necessarily mean a revolution, and it is not necessarily connected with an end. It can happen anywhere, anytime. It is about putting yourself into a state of readiness to change, opening to the unknown, searching for new solutions for yourself, but also for places that lose their meaning». The work is an example of how found objects can obtain new 1 significance and recharge their historical aura through being relocated and reinterpreted by artistic means, forming new statements in public space. It is important to note that the artist hasn’t been dwelling upon or citing explicitly any ideological components of the object’s history — instead, playfully and assertively, she has been turning politics into poetics, appealing to and searching for the new peaceful universalities.

Jabłońska has set a sign of «New Life» on a long journey through a variety of contexts — and every place where the installation has been brought to has developed a new story, engaging people from different social groups and creating new situations. The artist claims that the work arrived in synchrony with important changes in her own personal story as well — in addition to bringing the productive change to every scenario it becomes a part of. In this sense, it is especially remarkable that «New Life» has allowed to launch a new space for artistic activities and, potentially, to establish a close relationship with the community of the rural area where the lodge is located — from this turn of the story may indeed sprout an enormous number of new creations and narratives. 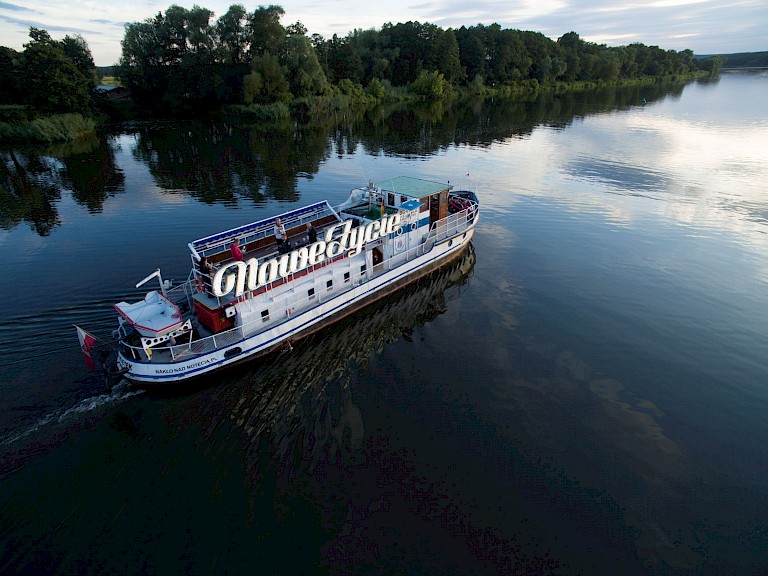 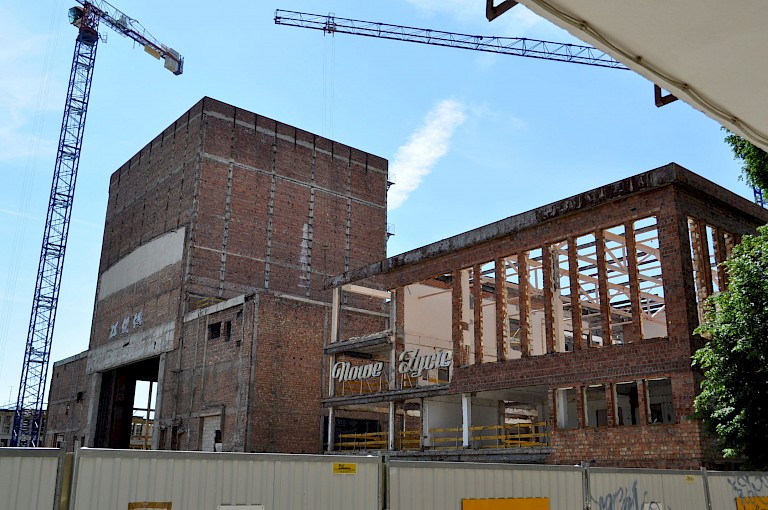 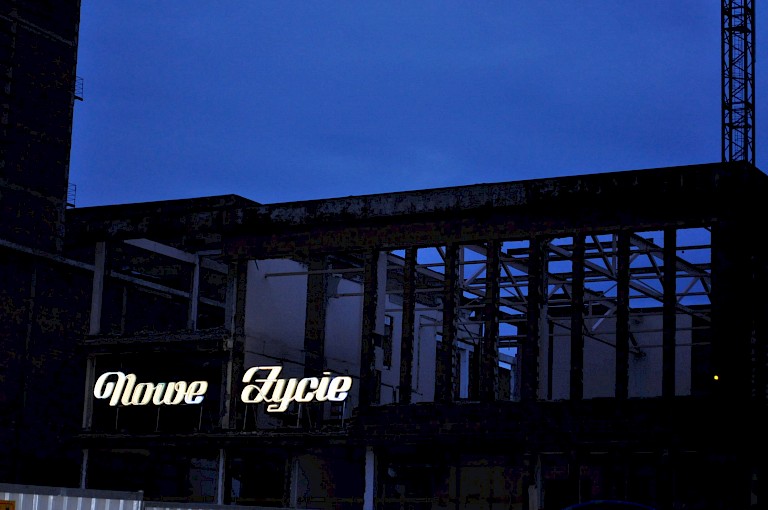 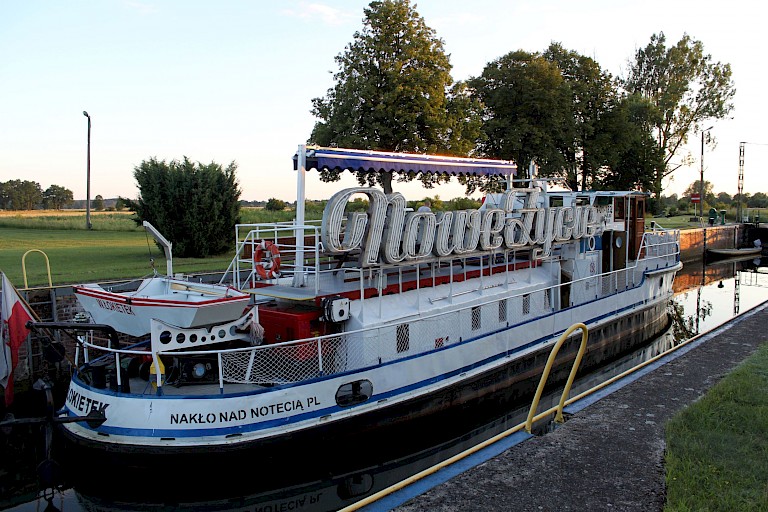