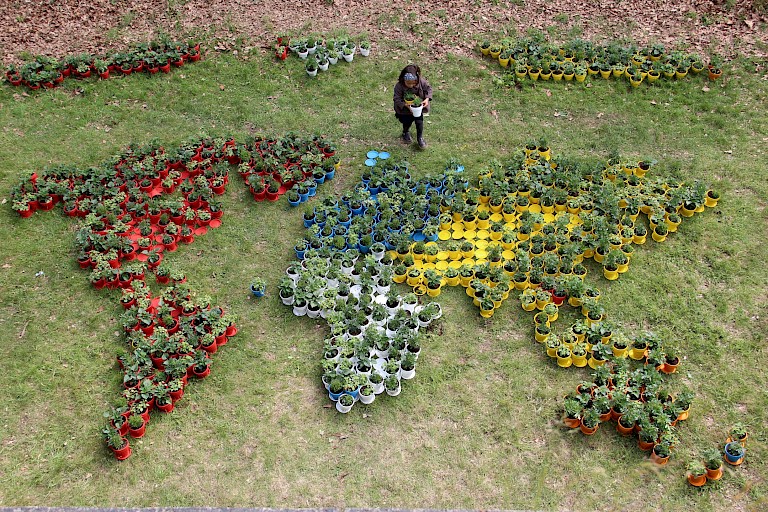 Nous ne notons pas les fleurs is a cycle of process-based installation and performance work that started in 2009 and end in 2015 and within those years there were six projects that took place in several different countries; project in Patna-India as a response to a high rate of mobility and migration out of the poorest area in India, a project in Singapore as a response to the expansion and reclaiming of the land, a project in Jakarta-Indonesia as a response to its local site within Senayan Central Business District next to World Trade Centre by alluding to the trade and mobility around map, a project in Fort Ruigenhoek-Utrecht Netherland that refers to the growth and constant natural change as a response to the intended participants of the exhibition and to the outdoor site of exhibition, a project in Gwangju-South Korea that explores the embodiment of the city by its residents and responds to the two sites of the work in the Gwangjeu Daein Market and last but not least a project in Bienalle Hall and Leiden-Netherland that refers to transformation of world maps, which illustrate the changes of continents shape over time. Each location indicates different cycle of works that involves game-performance accompanied with installation, surveillance cameras and multiple-channel video (livestream and time-lapse processed on-the-fly). On each game performance and installation with video, it is presented in a site specific and local specific environment.

The title was taken from Antoine de Saint-Exupery’s Le Petit Prince (1943), in which a geographer advised a prince that geographers do not record flowers as flower is an ephemeral. In relation with the dialogue, each map installation exists as an ephemeral installation that was made of colourful flowers or other ephemeral materials such as agricultural products followed by the game-performance activities that acted upon the installation while being recorded as the audiences also become part of the project by allowing them to contribute on the formation or deformation of the work.

The video is also utilized to stimulate the participants’ awareness that there is more to the performance than merely a passing event. The video screenings have different formations on each site and it always involves a surveillance camera with multiple channel videos. The surveillance cameras not only show a bird-eye view of the map with the participant but also record of what is happening underneath. From the multiple channels, there are display of a live stream from the camera plus the time-lapse version of what occurred in the past. The video shows different perspectives that portray each event partially through different time-scales and different time range. The video also has an active role that works as an ephemeral mapping device and able to re-enact the timeline. Lastly the video is also display the installation post-performance that was presented in multiple-channels as it was means to show different view point of the artwork outcome.

The artist intention is to bring the audiences’ attention for the relationship between citizenship, mobility, territorialism and political balance of power through audiences’ participations with the installation within her performance. The performance also enables the audiences to emerge their sense of pride knowing their current position in the world as well as their past position. The project in Fort Ruigenhoek children viewed the map merely just as unknown pattern of colours. While holding the session in Patna, India, the artist invites audiences to trace their route together to migrate from one state to the other. Based on these observations it can be concluded that different level of learning there are also different stages of maturity in perceiving maps.

Nous ne notons pas les fleurs is a part of research that investigates the dynamics of the geopolitical border and its condition. The artist focuses on the complexity of the process (not the result) as the critical aspect that propose question on the concept of geographical border. In her work, the border is constructed by a continuous process, and it was built by the networks of actors and individuals’ agency that act as an important factor.

In the past, the artist encountered a situation yang relates to geopolitical border that she was refused to enter a country even though she held a legit permit to enter. Through this project she would like to explore the idea of mobility and the idea of political border as non-rigid. Her work is representing her situation by always coming from a marginal position in the aspect of personal, professional, and political. She became part of the uneven process of globalisation as she is a Chinese Indonesian. As a Chinese Indonesian, she belongs in a minority group in the country then she migrated to Australia a skilled migrant back in 2003 thus allowing her status to be a permanent resident of that nation. As a migrant from a third world country, she sees that as an opportunity that enables her to see a better vision of the world compare to others who grew up in first world country, because their position is always in the center of the whole world.

In Nous ne notons pas les fleurs, map installation is the first component that enable audience to perceive a better vision of the world. With the game performance, she set the rules and guidelines on how the audience can respond to the map installation, and as result the audience interaction is fluid with no predictive result. The complexity of the project is interweaving between each aspect of her work as it response the site specificity. Through a deeper the local specificity context, it has uphold the audience interaction in which without their involvement the work will not generate the essence of the work. Another essential aspect from Nous ne notons pas les fleurs work is the video that was used to capture all the audience interaction and movements was presented in various scheme of time and video channels that suggest more than just a passing event. Within this setup audiences are experiencing different realities between encountering the work directly and becoming the spectator of the work hence each reality has constructed different set of place making depends on how the audience perceived the experience based on their past background.

The project is part of the chronology research of the artists throughout the years which consist of three main theme that explores about Passport, Wall, and Map. Nous ne notons pas les fleurs is part of the Map, it is an ongoing cycle project which are able to be understood independently of each project or together as a cycle. Either way have the potential to interact with each other.

The artist chooses to use flower based on its ephemerality and to record it at the same time. She discovered the uses four-colour map theorem when while working with cartography on her other work “Terra Incognita et cetera”, in which she uses four types of flower buds for her first work in Patna, India.

The artist arranged the flower buds by separating the flower buds in a bed of flowers following the region of the country followed by the process of a site of participatory performance in which the map borders are constantly modified based on the audience participation while being recorded in the bird-eye view from the video camera. Through constant changes, the project explores the idea of mobility and impermanence of political borders as well as challenging the notion of maps that is frozen and borders that is static. 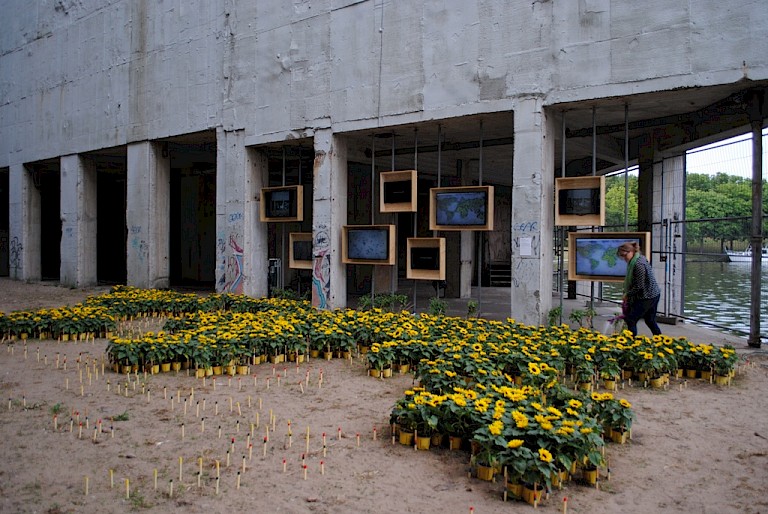 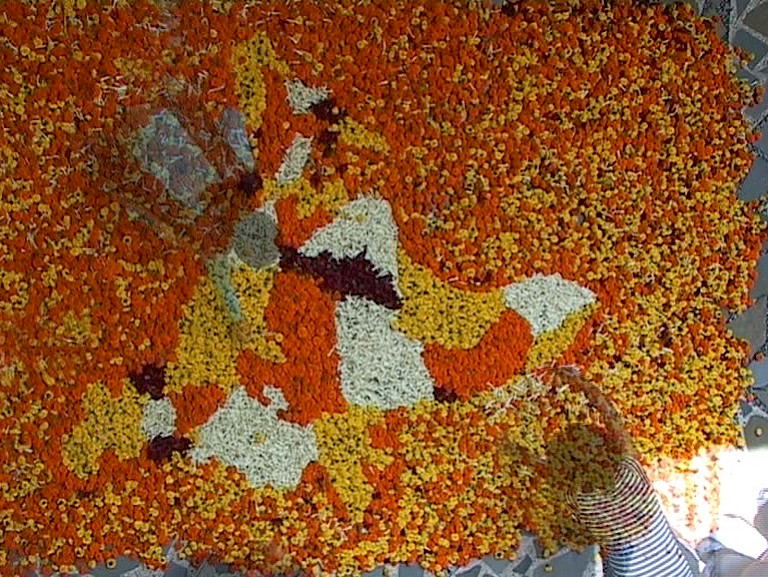 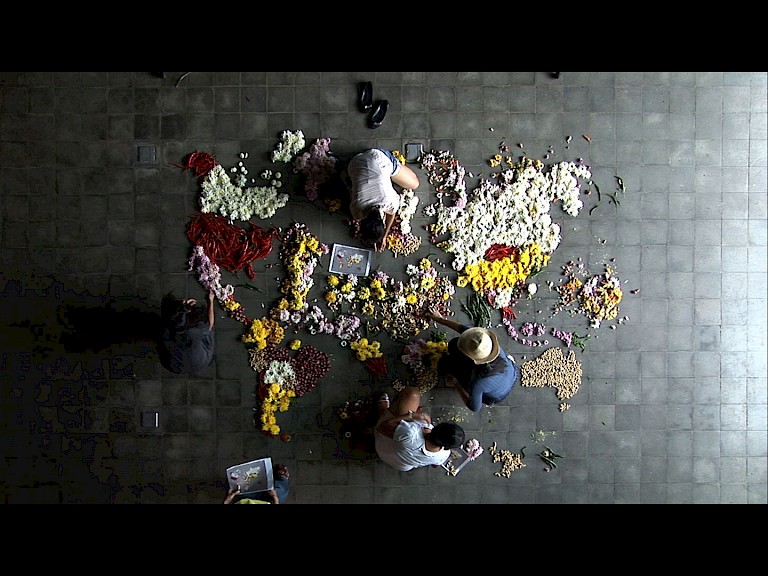 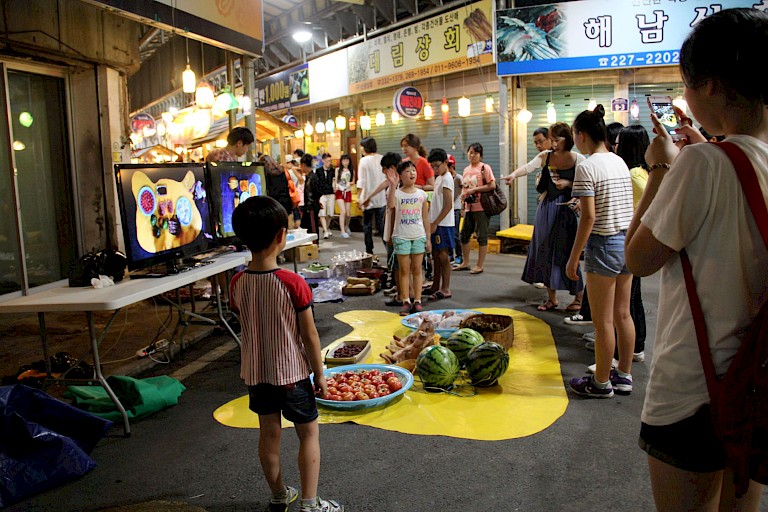 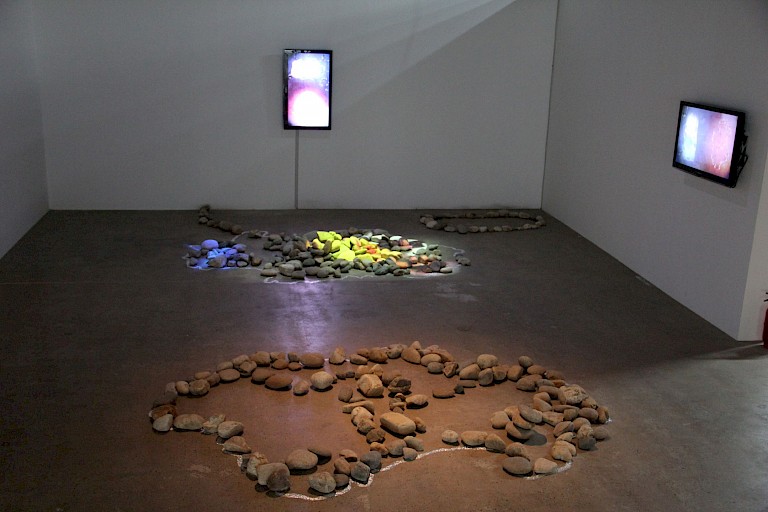