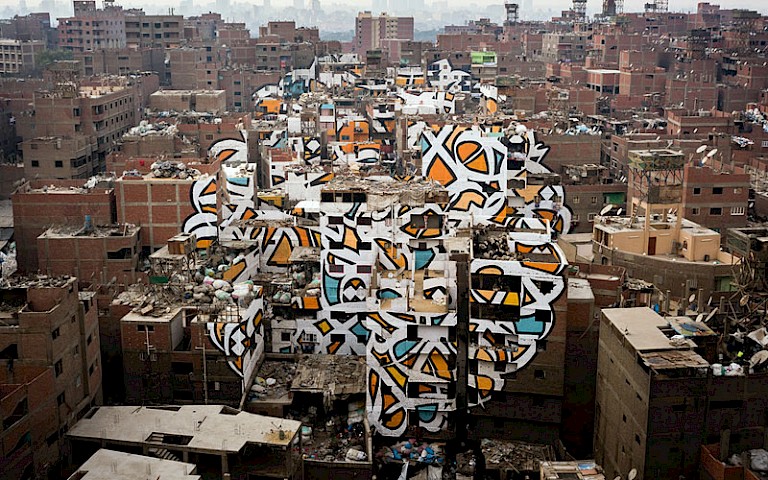 In the neighborhood of Manshiyat Nasr, Cairo there is an isolated Christian coptic community: they call themselves the Zaraeeb (“pig breeders”), and for decades they have been collecting the garbage of the people of Cairo, sorting it in their own neighborhood. Pigs and other animals are fed with the organic waste that this community collects on a daily basis. The locals have built a self-efficient and highly profitable recycling system in the city, among the most efficient on a global level, and are able to recycle up to 85% of the collected garbage. Despite the commitments to the cause, this community is on the edge of Egyptian society, because of the strong association with trash; the area is commonly perceived as dirty by the rest of the citizens in Cairo; its inhabitants are marginalized and segregated, to the extent that they have been given the name of Zabaleen (“garbage people”).

The French-Tunisian artists eL Seed heard about this community for the first time in 2009, when the Egyptian authorities under the regime of Hosni Mubarak, decided to slaughter 300,000 pigs using the pretext of H1N1 virus.

This event killed their livelihood. eL Seed travels the world, making art in Paris, New York, Jeddah, Melbourne, Gabes, Doha and beyond. His goal is to create massages of peace with his own style of Arabic calligraphy. His aim is to create dialogue and promote tolerance as well as change global perceptions of what Arabic means. He does not just want to make sure those messages are relevant to the place where he is painting, but also that they have a universal dimension, so that anybody around the world can identify with those messages.

In 2015 el Seed realized an anamorphic mural of Arabic calligraphy in the neighborhood of Manshiyat Nasr, Cairo. The artwork named: “Perception”, was conceived with the purpose of highlighting and changing the image of the Coptic community of Zagreb. The whole artwork is fully visible only from the Muqattam Mountain, where a famous cathedral lies inside a cave. If seen on any other street in the neighborhood, the mural appears fragmented. It is just from the top of the mountain that the monochromatic facades of the buildings in the neighborhood turns into an orange, blue and white colored mural that shines over 50 buildings. It is the artist’s largest and most ambitious project to date. The making-process was defined by the artist as a human experience, as it had impressive support from the community. Many residents offered moral and physical help, by allowing to paint they house facades, and collaborating with the artist’s as a team member.

The excellence of the project is clearly visible by the innovative design and the ability to create dialogue with the local community. The quality of the design consists in the complexity of the work, an anamorphic piece that extends over more than 50 buildings in the district, designed to be visible and readable only from one perspective. The value of the project is represented by its social aspect, achieved through interaction with the community and the ability to tell it to the world, changing the way it was conceived. The locals, during the making process, would refer to the artist and his team with the expression 'nawartouna', an Egyptian expression that means:"you brought light to us". A perfect example of how art can embellish, but also illuminate. The project highlights the idea of diversity, that can be easily linked to the époque of human migrations in which we live, and of the xenophobic reactions and of the nationalistic ideologies that derive from them. An invitation to reflect upon the other, to reconsider our points of view towards cultural differences. To get away from the prejudice of ordinary life, is like climbing a mountain: it takes big efforts, but eventually everything becomes clearer: our perspective of the world has changed, and our horizons have widened. It is in this direction that public art has the important role of elevating the individual to have a deeper understanding of human existence.

When the artist first entered the neighborhood of Manshiyat Naser, he noticed that despite the intense smell of garbage, and the loud noise of the traffic, everything was perfectly organized. He went to Muqattam Mountain where the community built the St. Simon Monastery; the pride of the community, a 10,000-seat cave church carved into the mountain itself. It is there that the initial idea of Perception was generated: an anamorphic piece, only visible from just one vantage point, the top of Muqattam Mountain. In order to accomplish the project it needed the full approval of the community, and depended on its spiritual guide, Father Samaan, the leader of the community. The artist managed to get the meeting with the the leader of the community, who fell in love with the idea. As with the previous project, eL Seed's main concern was that the community felt connected with his words. For the community of Manshiyat Naser, he decided to write in Arabic the words of St. Athanasius of Alexandria, a Coptic bishop from the third century: ‘إن أراد أحد أن یبصر نور الشمس، فإن علیھ أن یمسح عینیھ’ (Anyone who wants to see the sunlight clearly needs to wipe his eye first.)

At the beginning of the project, the artist numbered all the buildings on a sketch. At this stage, there was no interaction with the community and people did not get the point of all that. But soon the residents were offering their facades to be painted. It took hundreds of liters of paint, a dozen blue manual lifts, several trips back and forth to Cairo, a strong and solid team from France, North Africa, Middle East and the US, one year of planning and logistics and three weeks of intense working for the project to be finished. Some locals shared the work load with artist’s team: “some people [were] in charge of filling in the space of the calligraphy that the artist traced with colors, such as blue, yellow and orange; some others, [were] in charge of carrying sand bags, and putting them on the top of the building to hold some manual lifts; and some others [were] assembling and disassembling those lifts and moving them around the different buildings. “

Every day during the making process the artist and his team would climb up to the mountain to look at the progress of the piece. Standing at the same point day by day, made him realize the symbolism behind this piece of art: “if you want to see the real image of somebody, we may need to change our angle.” For the piece, a white glow-in-the-dark paint was used for the calligraphy so at the end of the making-process, some black light projectors were rented to light up the whole neighborhood, to surprise everybody around it. Before the completion of the piece, the people did not know what the message of the artist was. They had to trek up the hill to see what the calligraphy message said. For example, a resident, Uncle Ibrahim, who hadn't been to the mountain in 10 years and never took a day off, surprisingly climbed all the way to the mountain to look at the piece when it was finished. He was really proud to see his house painted, and he said that Perception “was a project of peace and unity, and that he had brought people together.” 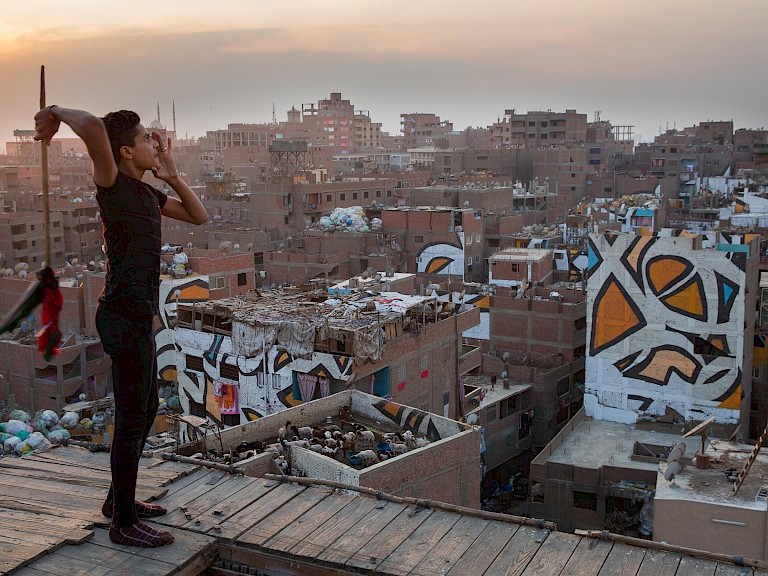 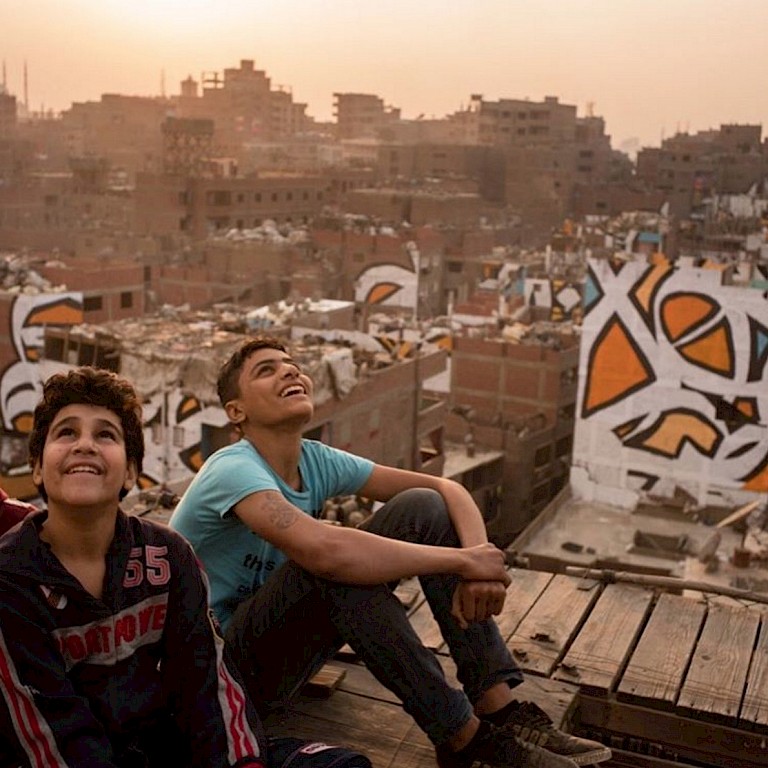 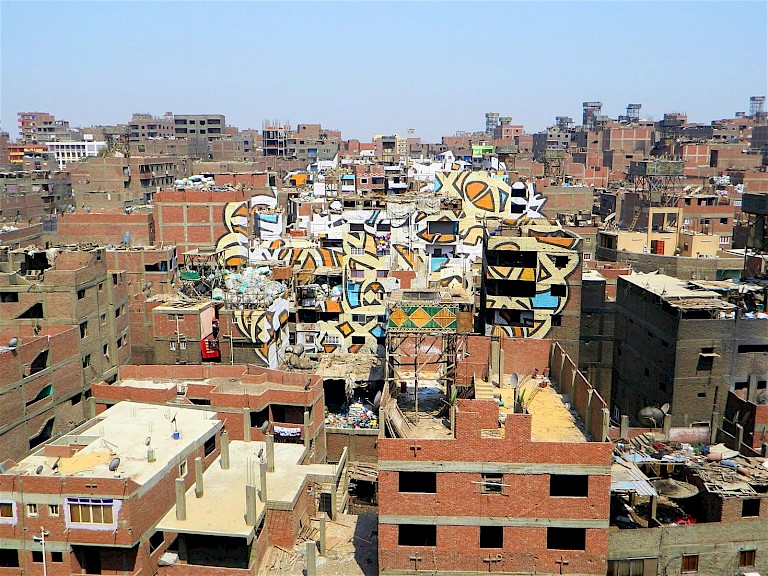 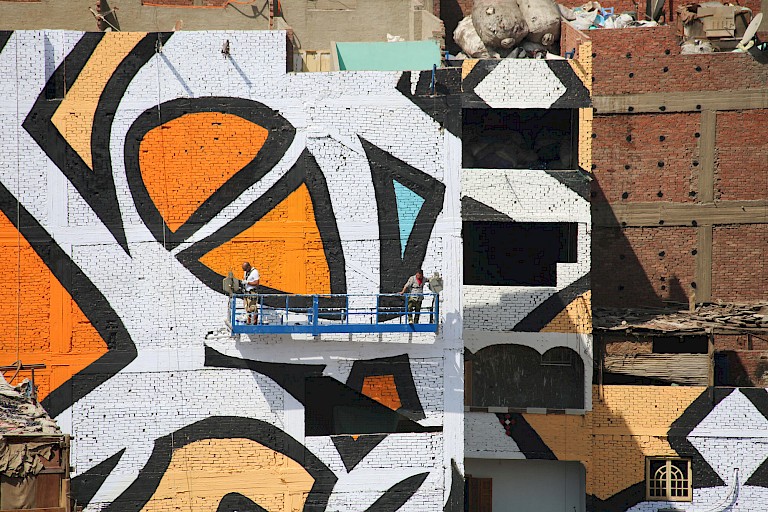