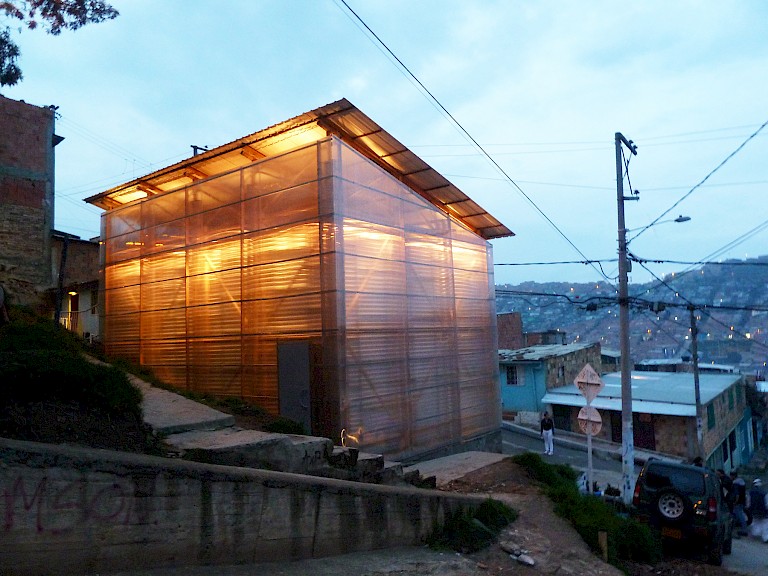 Potocine is a community-based artist-run architectural project, located in Ciudad Bolivar neighborhood in Bogota, Colombia and built in 2016. The initial conversations about this project started in 2010 when Expanded Architecture was just an annual meeting, before they became a collective. During the second annual meeting they had an initial interaction with Ojo al Sancocho, a film festival, together they paid a visit to the neighborhood and had an introduction about the social and cultural local initiatives (the festival, the community film school with a territorial focus in the peripheries (symbolic and physical) of Bogota. Since 2010 both collectives have stayed in touch. During the six years they overlapped in different spaces because they were interested in similar issues, Ojo al sancocho collective would go to Arquitectura Expandida’s activities and all the way around. Both collectives started collaborating in small things and then became accomplices and friends. During informal conversations between them the idea of a cinema would come up frequently.

Only until February 2016 a possibility to carry it out presented itself. The collective was invited by Gonzalo Herrero, co-curator of Fear and love: reactions of a complex world, the exhibition that will open the new venue for the Design Museum in London. They were asked to have a museum-piece even though the curator knew that Arquitectura Expandida works mainly with communities and self-construction. The museum agreed to find a way to finance the Cinema and the collective agreed to have a piece for the exhibition in London. Partnering up with Ojo al Sancocho in Ciudad Bolivar, Bogotá, seemed the most obvious thing to do, not only were they a very serious community festival and art school, but also, they had already been talking about this idea of a Cinema for so long.

The first thing they did was to establish a relationship with the ICES, Institute Cerros del Sur, who owned a piece of land where their school was located. Within their land there was an abandoned building with its concrete foundations still in place, so it seemed the appropriate physical conditions as well as symbolic for the new Cinema because it was the first building the school had in the 1980’s and it had been caught on fire.

After three months (June – October 2016) of self-construction, the first Cinema of Ciudad Bolivar, launched with the Film Festival and attracted a lot of attention from different institutions, the ministry of culture of Colombia, the French embassy (with the donation of a camera, the Goethe Institute (donated a film projector), and many others. 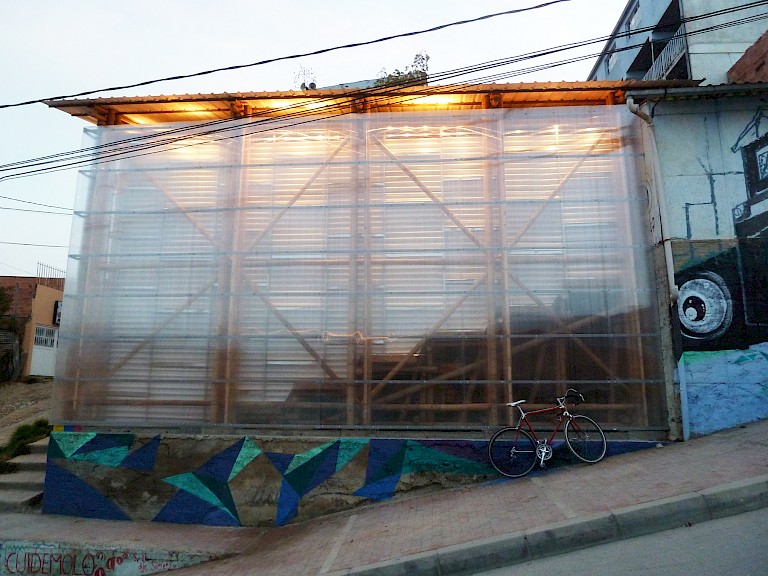 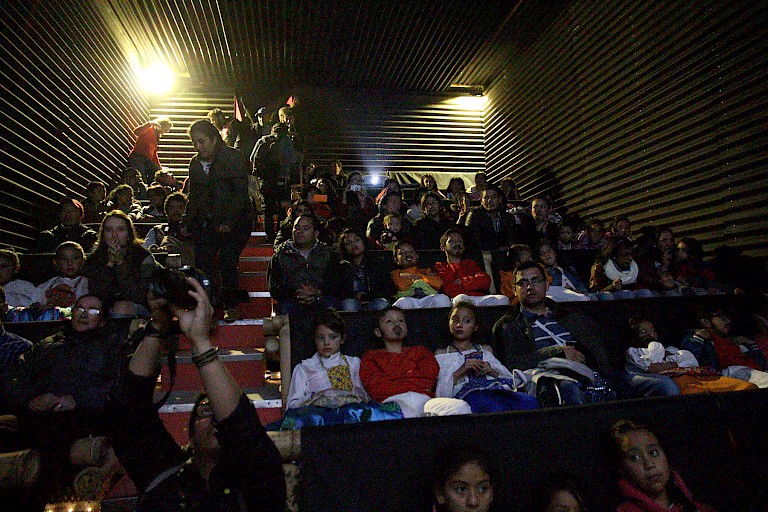 Potosí, is a neighborhood in the urban-rural border in Bogotá, Colombia, founded in the 1980’s as an informal settlement with no running water, electricity, cultural buildings or activities, not even public space reserved for their inhabitants. The community almost immediately started their own cultural initiatives, through an organization called Cerros del Sur Institute (Hills of the south Institute), that included a film festival, an audiovisual school, a radio station among others. Ojo al Sancocho is the name of the film school and festival that has been running for over ten years now. Potocine is the building designed by Arquitectura expandida, that aimed to contribute to the film activities and to become a landmark. The project worked as a self-built project and now it is self-managed by the community.

From a curatorial point of view this particular project and its relationship with the Design Museum of London results greatly interesting as an opportunity to think the exhibition as a place that allows and encourages a series of unprecedented encounters in the way that is the institution the one that finances most of the project. The curator Gonzalo Guerrero invited Expanded Architecture Collective to be part of the show “Fear and love: reactions to a complex world” that took place in London in 2016. Even though the curator knew clearly what kind of work Expanded Architecture Collective usually makes, the invitation had, as a condition, that they had to provide something to be exhibited in the museum premises. This condition generally requires exercises of translation, relocation of the spaces and communities to the exhibit room that are resolved in mockups that in most cases lose a great deal of the senses and meanings of the projects. Still, this project, impossible to relocate for being an in-situ creation down to its social and contextual senses, avoided this fate by substituting the translation exercise by a self-representation exercise. In this case, the community audiovisual school Ojo al Sancocho that were the connection with the territory and with whom Potocine was conceptualized and built, video recorded the development of the project, resource that was used for the exhibition in the Design Museum in London. 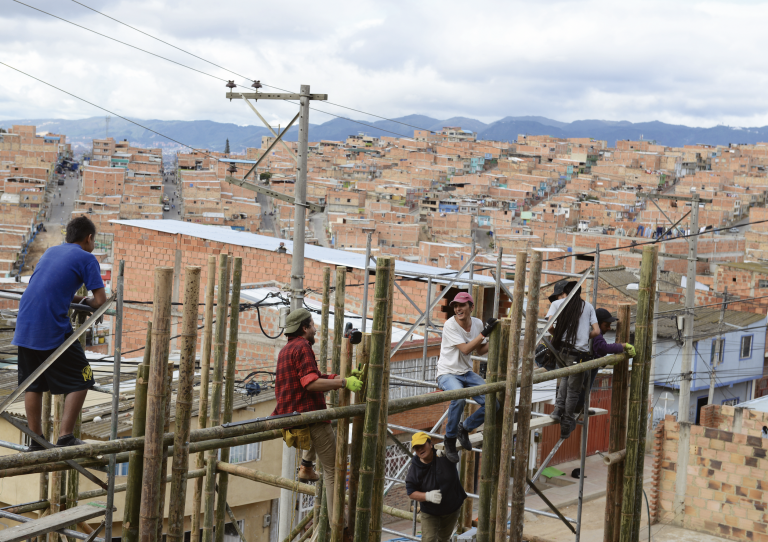