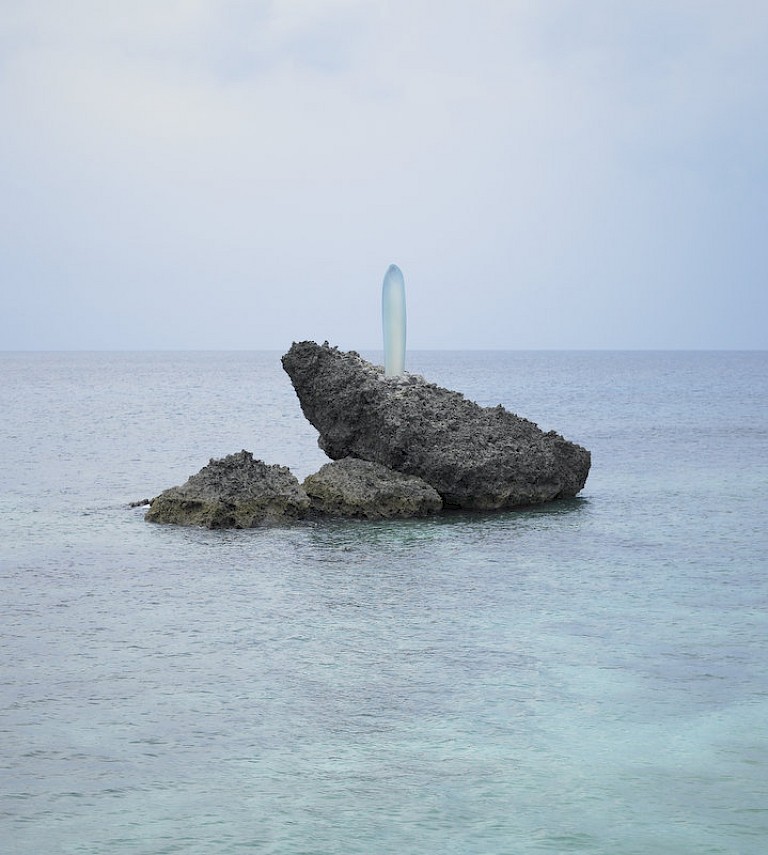 Situated at Seven Light Bay on tranquil Miyako Island, some 180 miles off the coast of Okinawa, stands a monumental installation by celebrated Japanese artist Mariko Mori. The piece is titled Primal Rhythm: Seven Light Bay (2011) and consists of a towering solar column or “sun pillar” and a glowing Moon Stone on separate rock mounds in the island’s bay.

Inspired by the caves of Okinawa in Japan, the Moon Stone is a hollow shell through which light enters as it floats in the bay, shifting colour from red at low tide to blue at high tide, with many gradations in between.

Starkly elegant with strong, simple lines, the work has a Brancusi-like minimalism about it. Intended to “nurture creativity and explore a dialogue between art and nature,” Primal Rhythm, like much of Mariko Mori’s work, draws upon a desire to fuse art and technology. 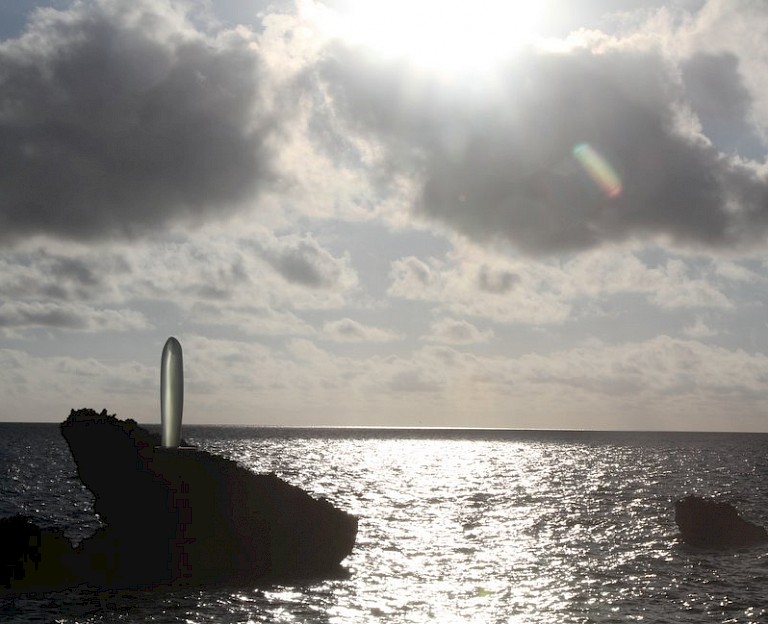 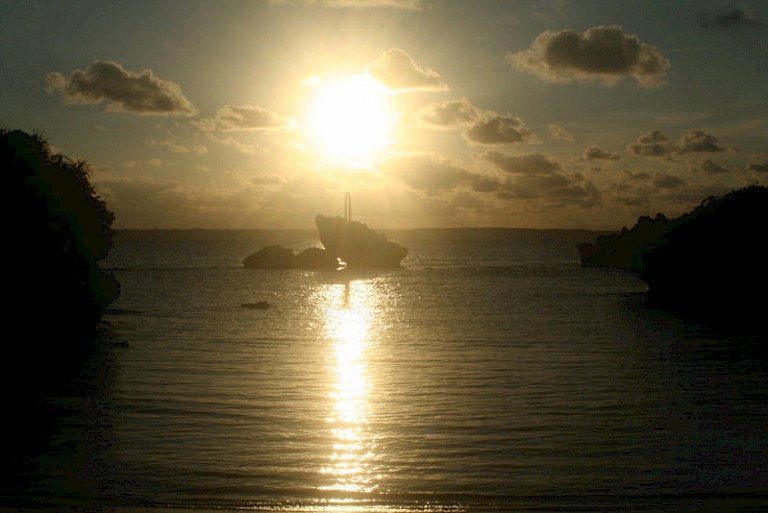 The juxtaposition of Eastern mythology with Western culture, Buddhism, and the idea of universal spiritual consciousness is a strong and recurring theme in Mori’s practice. Often drawing from centuries old rituals and symbols Mori has created many strikingly beautiful visions for our postmodern world.

As a site-specific work for the remote and unspoiled landscapes of Miyako Island, Primal Rhythm evokesthe fertility rites of ancient cultures and highlights an existing and delicate balance between humanity and nature. Reminiscent of pagan Celtic and other ancient cultures whose lives were controlled absolutely by the seasons and who marked their change with communal rituals, Mori has built a monument that is oriented towards major celestial events. Mori has chosen exact coordinates for her work on Miyako Island so that at the moment of winter solstice, the lengthening shadow of the “sun pillar” will penetrate the moonstone installed in the bay, uniting the celestial with the terrestrial, the masculine with the feminine. An allegory of fertility, Primal Rhythm: Seven Light Bay acts as an important signifier of rebirth and life in a region and country shattered by recent events.

The earthquake off the Pacific coast of Japan, a magnitude 9.0 on Friday 11 March 2011, was the most powerful known earthquake ever to have hit Japan and one of the five most powerful earthquakes in the world since modern record keeping began in 1900. The earthquake triggered powerful tsunami waves and caused a number of nuclear reactions; primarily the ongoing level-seven meltdowns at three reactors in the Fukushima Nuclear Power Plant complex.

The events of 11 March left Japan shaken in almost every way. Hundreds of thousands Japanese lost their families and homes and over 15,800 deaths have been recorded. The country known as the one of most technologically advanced faced shortages of fuel, electricity, and food due to the three-fold tragedy of earthquake, tsunami, and nuclear accident.

The Winter Solstice of 2011 was an important event in the Japanese psyche. Celebrated in many cultures throughout the world, solstice honours love and new birth as well as the collective unity of humankind. Winter Solstice, although it is the longest night, is also the turning point of the year, as following this night the sun grows stronger in the sky, and the days become gradually longer once more. Thus, Winter Solstice is also a celebration of rebirth. A powerful symbol harnessed by ancient cultures, this celebration no less valid today.

Mariko Mori’s Primal Rhythm: Seven Light Bay celebrates the primary rhythms of the universe, which urban life and modern living largely erases from our consciousness. This important piece intentionally reconnects people with the natural world and, in doing so one might argue that it offers an opportunity to heal. Mori is no stranger to engaging public awareness through ancient wisdoms and contemporary public art works, and Primal Rhythm: Seven Light Bay may just be her most powerful work yet.