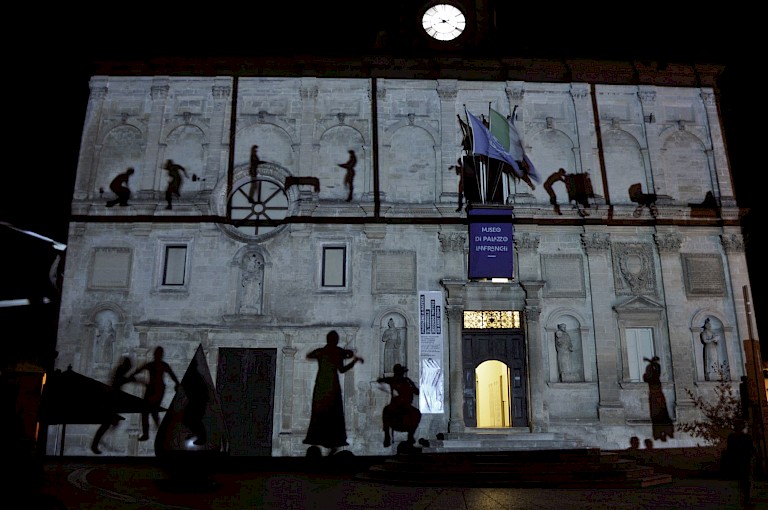 Basilicata is a region in the south of Italy, with an important historical and cultural heritage. Its cultural history speaks of Paleolithic, Magna Graecia, Roman Empire, and the Napoleon empire. The land is constituted by 47% of mountains. For this reason Basilicata has never had a large population: only 58 ab./km2 distributed on a surface of 9,995 km2 (A total of 570.000 inhabitants) Because of its geographical features, the region accounts a vaste territory with very small social realities one very distant from the other. As a result micro-cultural realities have developed their own traditions and folkloristic elements distinctively, making the cultural heritage of the region extremely rich and diversified.

The project "Private Conversation" stems from the profound need that the artist and citizen of Basilicata Elisa Laraia, to create a collector of memories made by the inhabitants themselves, to create an ethno anthropological archive realized for and by the community of the region. The art project is an intensive investigation of the territory, and gives voice to its inhabitants to promote cultural understanding among the different social realities. A project whose central focus is the community and its cultural memories.

With “Private Conversation” in 2005, the value of identity starts to be increasingly oriented towards the exchange of the size of the public and private. The project works on community involvement to create a choral narration of contemporary society. The people are the first protagonists of an artistic collective action designed to produce audiovisual documentary material relating to the situation of the ethno anthropological context in which the work is performed. Through urban laboratories, involving the community from time to time, and supported by the use of the technique of urban screen, the artistic action works on the concept of transfer of experience from private life to audience. At the end of the urban laboratories , after a phase of video editing, the video interviews are projected on historic architecture. The silhouettes describe the possible lives within the architecture, while the voices of the community spread in the urban space, becoming usable by the wider community in order to foster relationships within the communities themselves, highlighting the history, and the needs in the perspective of a shared vision of reality. The urban screen with a strong emotional impact has the purpose and the ability to transfer experiences from one place to another by highlighting similarities and differences in traditions and promoting the exchange of knowledge.

What is outstanding about this project is its progressive and inclusive vision, expressed in a continuous evolution. Several goals were reached since its first edition in 2009: 6 projects of public art made in Basilicata, 100 events in 7 years, including urban screen, conferences and urban lab in the streets of Basilicata and a Higher Education course in partnership with the University of Basilicata dedicated to 20 artists from all over Italy and the world, with a number of experts at the national level; 70,000 potential users per day with the Urban space platform, 7 exhibition stations in the city of Potenza, 50,000 users in the field of visual arts and 300 national and international artists involved by web with the first edition of the Public Art Award, with Spencer Tunick, as president of the Jury. The site www.laboratoriodiartepubblica.it was created in order to entrust to the global community the disclosure of the project "Private Conversation”, and of the artistic and social values that it wants to communicate.

In Private Conversation, the idea of social exchange dominates: the community-artist constantly share, interact and co-create new meanings. Moreover, everything in this project rejects the more individualistic concepts, however without ignoring the importance of the subjective and intimate dimension fundamental to artistic expression. The value of this project lies on its collaborative and interactive nature, but also on its ability to eliminate the boundaries between the private and the public. In this way art becomes "glocal", enriching itself with the whole, without losing contact with the concreteness of local communities.

Elisa Laraia’s idea was first developed in Bologna in 2003, with the Orfeo Hotel, an exhibition sui generis, of meeting and comparison with art, in which to contaminate one’s identity with other identities. The project Private Conversations starts in 2005, with the vision of the artist on the contemporary world, which is rooted in Augé’s analysis of nonplaces and sur-modernity. The private dimension of the participants, is transformed and relocated into the public realm. The aim is to recover an authentic feeling of being part of community, which today seems to be completely marginalized by the hyper-urbanized and hyper-technological society in which we live.

The different editions of "Private Conversation" are steps of a journey in which the artist and the users play to overthrow the private in the public, and the public in private: their family affections, their secrets, their idiosyncrasies, their own history and traditions. During 2009-2013 the project was focused on art residencies, with the aim of realizing of sitespecific artworks, developed by Andrea Nacciariti, Alessandra Andrini along with Elisa Laraia. From 2013 on, the project developed through three different phases: 1) Urban Laboratories, in which through video interviews are collected, on specific topics, thoughts, frustrations, hopes, emotions of privileged witnesses and common citizens. In 2016 edition, Students and other volunteers in every municipality collected the memories of their own cultural heritage. the town of Tito, some high school art students have rebuilt the history of art from the eyes of a local artist form the twentieth century; in Pignola, the community shared the memory and heartfelt popular participation in the traditional Donkey Race, in honor of Saint Anthony; in Picerno the locals chose the issue of accession of the community to the Neapolitan Republic of 1799. 2) the re-elaboration of the interviews in a video that mediates between documentation and artistic interpretation; 3) urban screens, video projection on historic buildings and / or abandoned buildings revitalized by this new function. The voices of the community spread in the urban space, in the streets, in the alleys, and become usable by the entire community in order to foster relationships within the place itself, highlighting the history, needs, in order to promote shared vision of reality and a new way of making community.

This project organically came to its most recent evolution: the creation of LAP Permanent Laboratory of Public Art, which was born in 2009 from 2013. Today it has reached 21 municipalities, defining itself as an identity mediator, and thus touching the highest point of contact between anthropology and art. The social pertinence of the project, is strengthened by its ability to aggregate public and private bodies, cultural institutions, non-profit associations, which were challenged to develop the ability to give voice to the community and to spread what has been learned during the exchange, to know each other and identifying themselves as under the same rich and diversified cultural patterns. 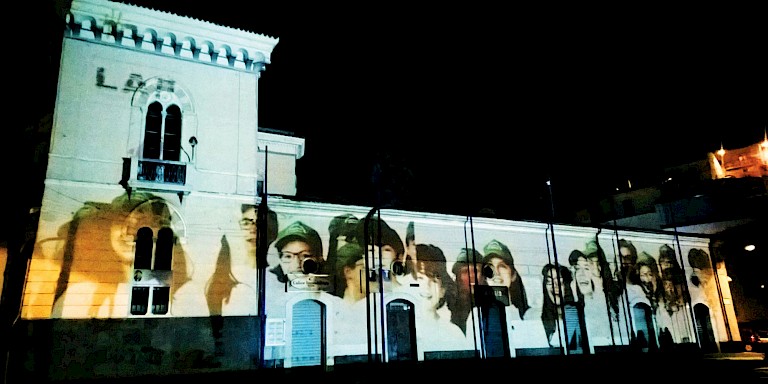 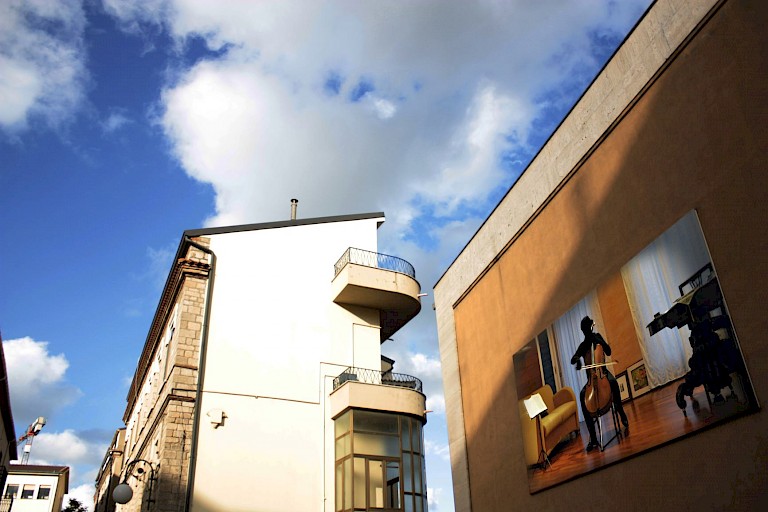 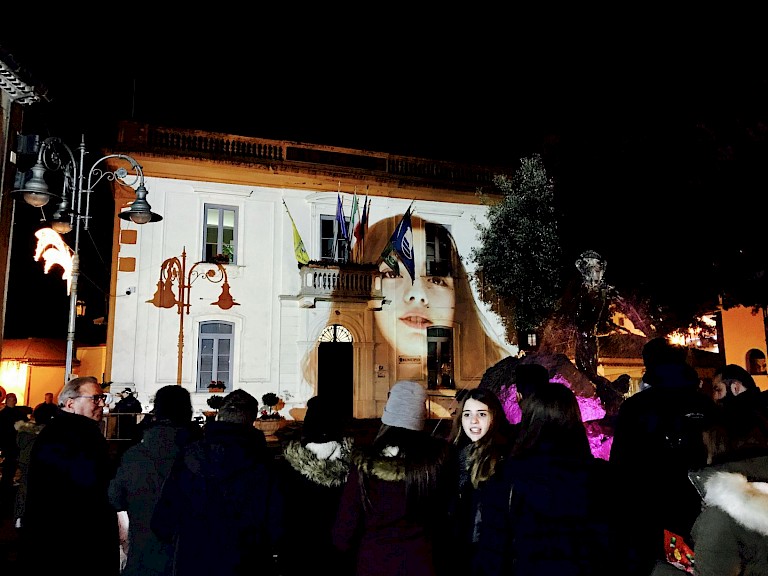 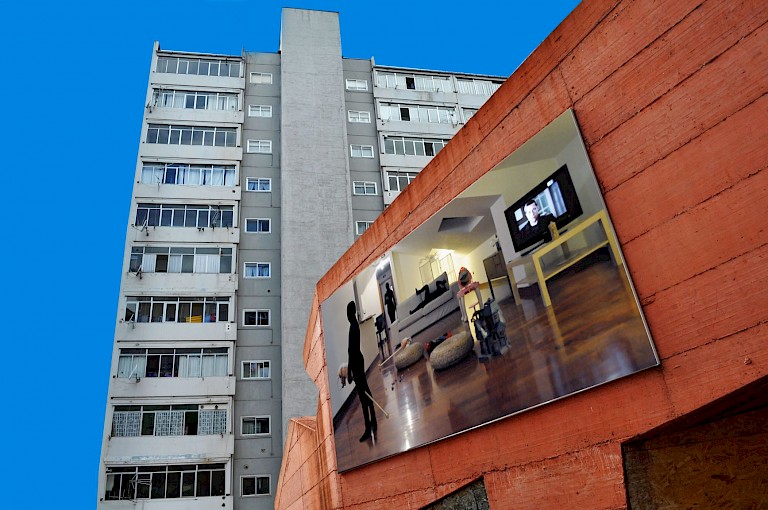