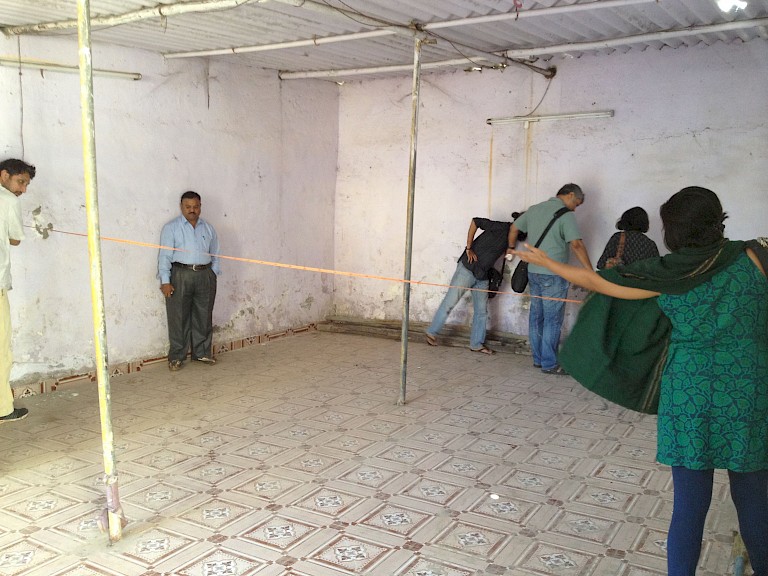 R & R was born out of the Draft Project - a year-long exercise featuring artists and professionals from nine cities - aimed at quantifying effects of public art in urban spaces. Here the artwork and the art site are the same, as the artwork is the creation and sustaining of a community art space. The area chosen - Lallubhai Compound - for this community art space has a specific history within the history of Mumbai city. Lallubhai Compound is one of the cities biggest "Slum Rehabilitation Association" (SRA) projects. The SRA projects involve demolishing slums and rehousing their occupants into structures built by the munipal authorities that resemble the low income housing projects of Pruitt and Igoe in the US in the 1950s. These SRA buildings are occupied by lower class and caste and other marginalised communities. For these occupants, art or creativity - even for their kids - is a faraway idea. R & R brings that idea closer. R & R is built towards the end of Lallubhai Park, and shares a wall with the Shivaji Nagar slum next door. The structure is made of recycled material, and houses a gallery/ activity area and a books and toys library. The areaa along-side the structure - which was a dead space - has been repurposed to a garden where residents of the neighbouring buildings have been trying their hand at growing various herbs and vegetables used in everyday cooking. The exhibitions in R & R focus mostly on concerns immediate to the residents of Lallubhai Compound - such as the demolition of homes, corruption faced in moving through SRA schemes, and their everyday lives. The space also functions as child-care for half the day as the kids of the area are welcome to come, use the library and garden or create their own art work, or play games - for no charge. Events that happen here take into account immediate requirements of the area including workshops on gardening, film festivals for kids and adults.

R & R has not only sustained for two years, it has created a deep sense of ownership and enthusiasm among the community that it was built with. It is important to note that the community was deeply involved in the creation of R & R - and especially the garden. Through R & R, a marginalised community took the chance to relax, create, engage with each other and for the kids, a whole new world opened up with access to books, computers and films that introduce them to concepts and ideas that create ambition, aspiration and give a boost to their imaginations. Additionally, due to the garden and acitivities around it, a better understanding of sanitation has developed in Lallubhai Compound and the Shivaji Nagar slum adjoining the R & R garden. Not only this, R & R has brought together the artistic community in Mumbai, through donations of time, equipment and funds to sustain R & R beyond the one-year time limit of the Draft project.

The project was borne out of the Draft project, initiated by curator Gitanjali Dang with Christoph Schenker of the Zurich University for the Arts. The project was a study into how public art could create social change within urban spaces - and to understand what kind of projects would optimally work in this context. Mumbai was among the 9 cities picked, and from each city Dang and Schenker selected a team comprising of artists, social practitioner and a curator. Dang stepped in as curator for Mumbai, and roped in the artist group CAMP known for their socialist actions within the art space. Along with CAMP, architects Prasad Shetty and Rupali Gupte (who were also architects for the 11th Shanghai Biennale) were brought in as social practitioners. The group decided to work on existing research into SRA projects and the fallout for those who have been shifted from their slums to SRA buildings in the far-flung suburbs of Mumbai. Using Lallubhai Compound, one of the largest SRA projects in Mumbai, as a base, the group decided their public project would be the creation of a community space along with the residents of the area. 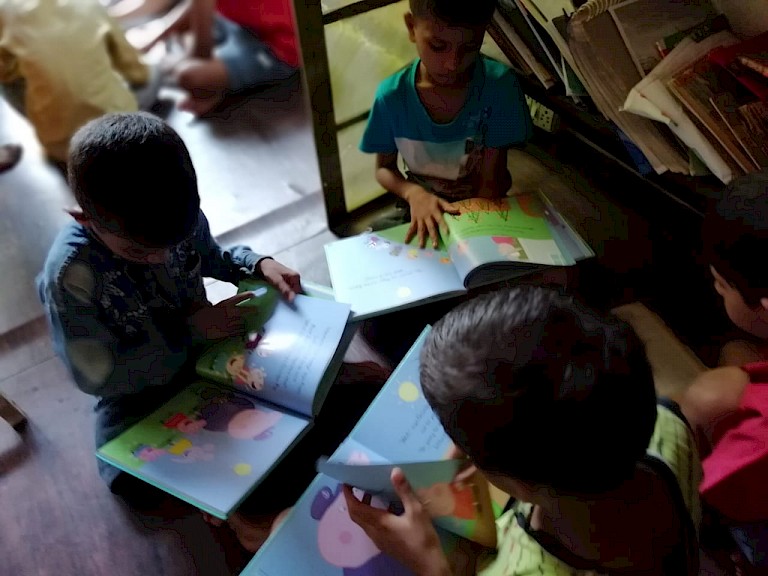 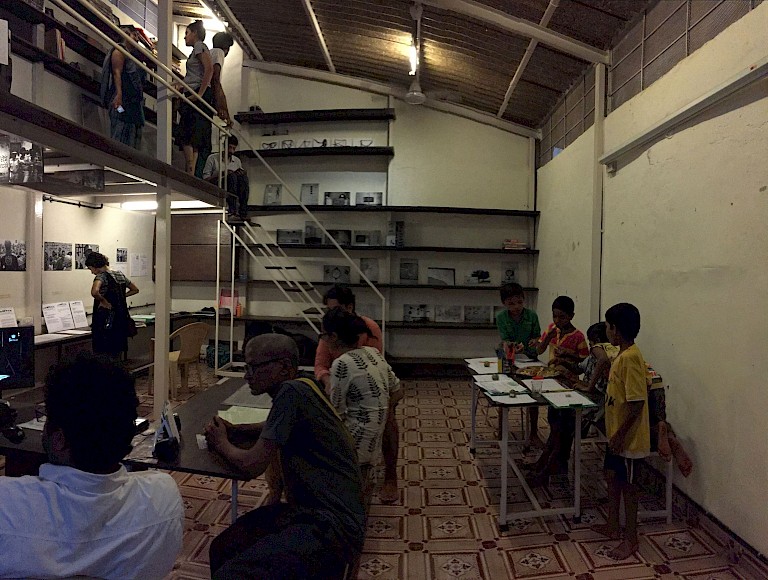 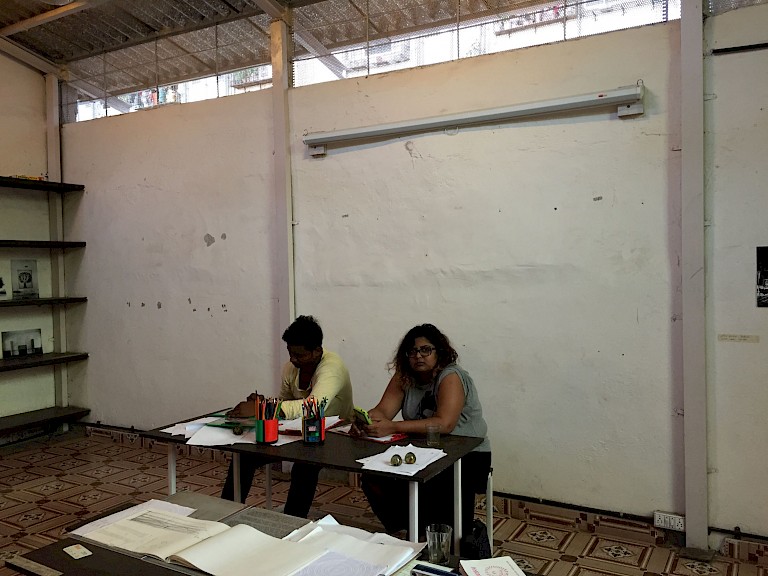 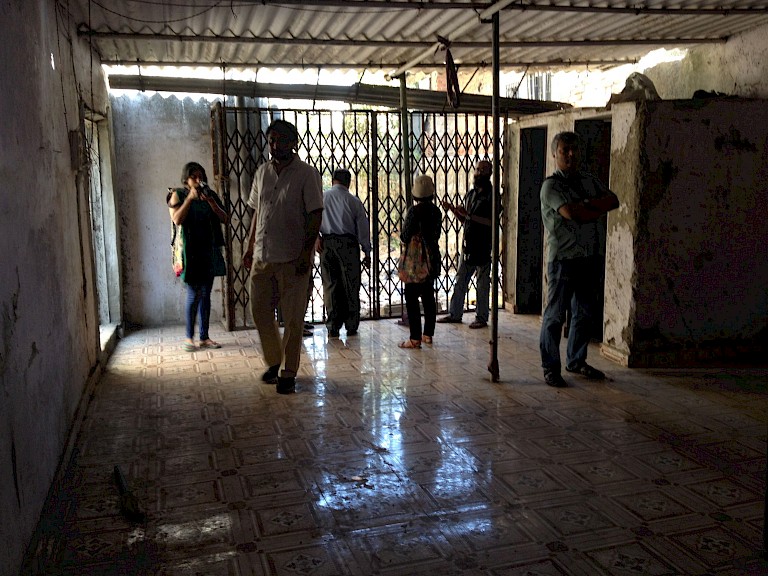