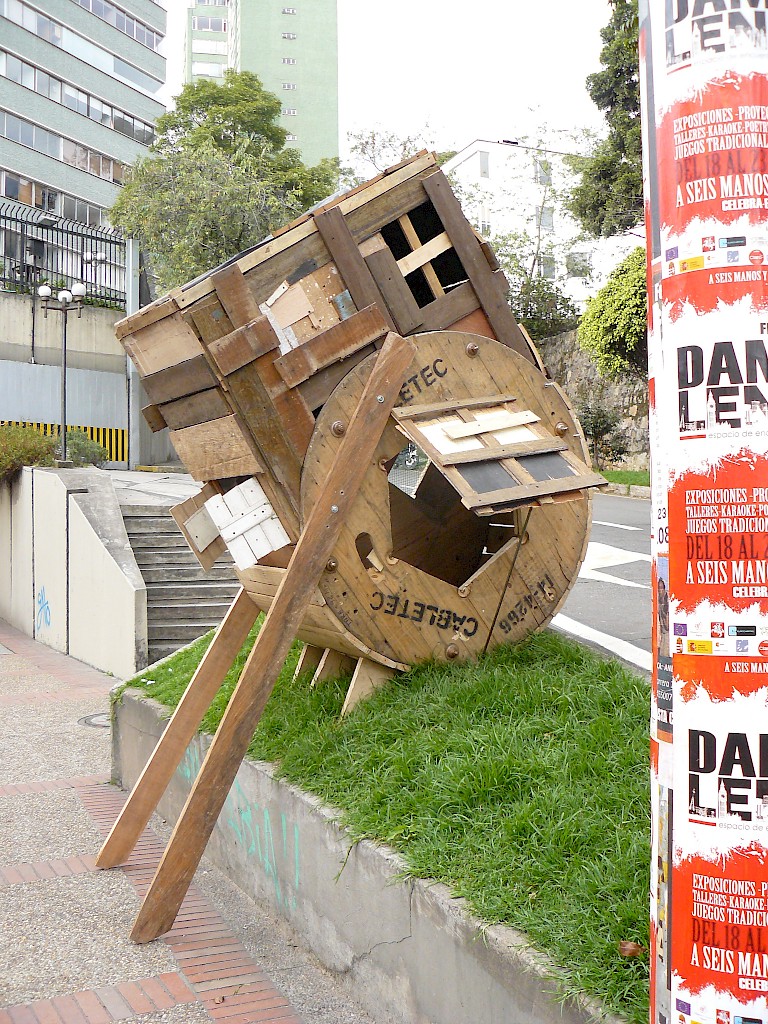 Roman Navas and Henry Palacio are two Colombian artists who went to art school together at the Superior Academy of the Arts in Bogotá. For six years they worked together in a number of collaborative outdoor projects, including the various versions of Rancho (that had different names every time). This project was one of the first ones they did together, when still at school and continued making it right after they graduated. They actually say that when they look back at it, the project feels a little young, in terms of the kinds of questions they were asking themselves as artists at the time and how those questions grew with them. Questions about what it is like to not have a home, is there a way they could be neighbors of the homeless, would a design, even if it somehow seemed naive, contain the basis for a deeper understanding of a life that most people find impossible to imagine let alone experience it. The artwork consisted of several shacks, ephemeral rooms in public spaces, that they built themselves using materials they found on the streets and without buying anything, in which they spent entire nights with the goal of understanding the morphological, social and political aspects of this kinds of constructions made by homeless people. They were initially interested in the shapes that were possible through these types of constructive systems, without any planning, some kinds of spontaneous constructions. Throughout a lapse of two years the artists built a weekly shack, trying to understand how these constructions respond architecturally to different specificities of urban contexts. Bogota is a city with average night temperature of 10ºC (50ºF) and with a homeless population of about 9.000 people, that build a refuge from the cold every night, but that the selection of materials goes beyond the weather, and it goes to specificities related to safety.

Building a shelter made from cardboard might not be enough, they would go for a metal rooftile to be used close to where the head was going to be placed to protect themselves from being stabbed in the middle of the night. It is imperative to leave a hole to watch out for any type of aggressor (a fellow homeless or even the police force). After every night they spent out, they would leave the shack available for other people to take over them. One curious thing is that homeless a particular homeless, Raul, told them he was not interested in their rubbish, not only because it was literally built out of the trash they found, but also because they came to the conclusion that this population is not at all interested in owing any property and their goal was not to save anybody from homelessness (not that a shack like this would do anyways).
This experience went beyond the architectural aspects of the constructions and ended up being a social experience never to forget for the artists. Rancho #9 was commissioned by La Otra Biennial in 2013. 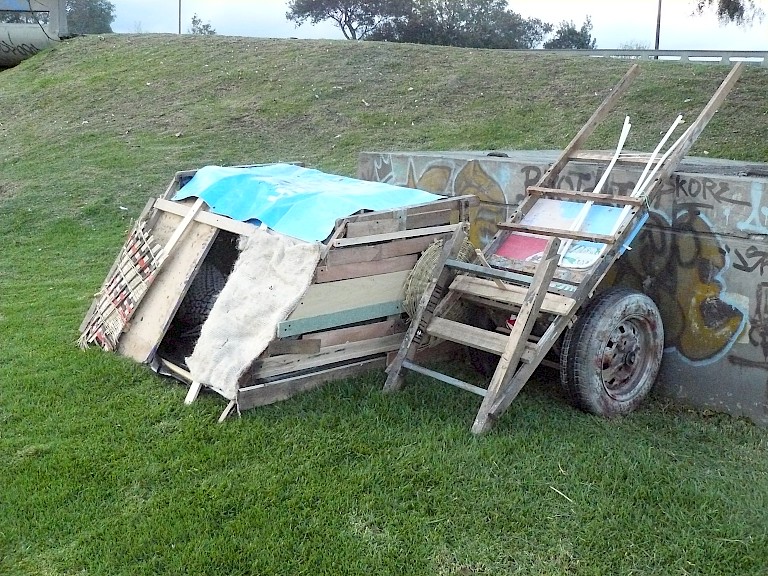 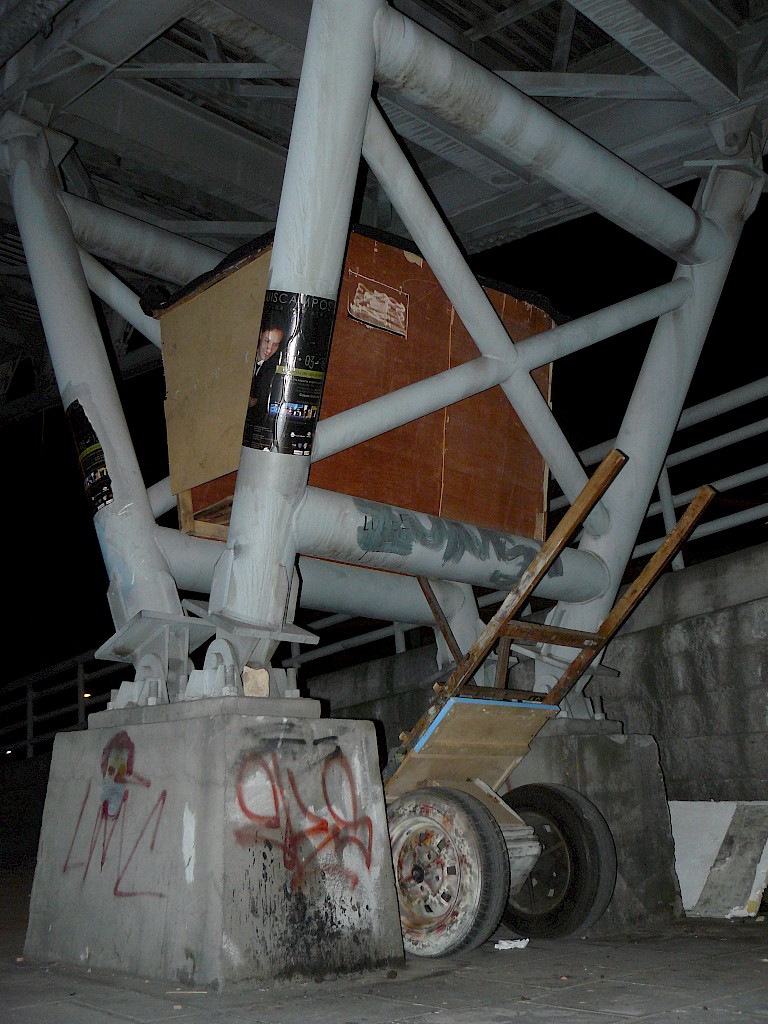 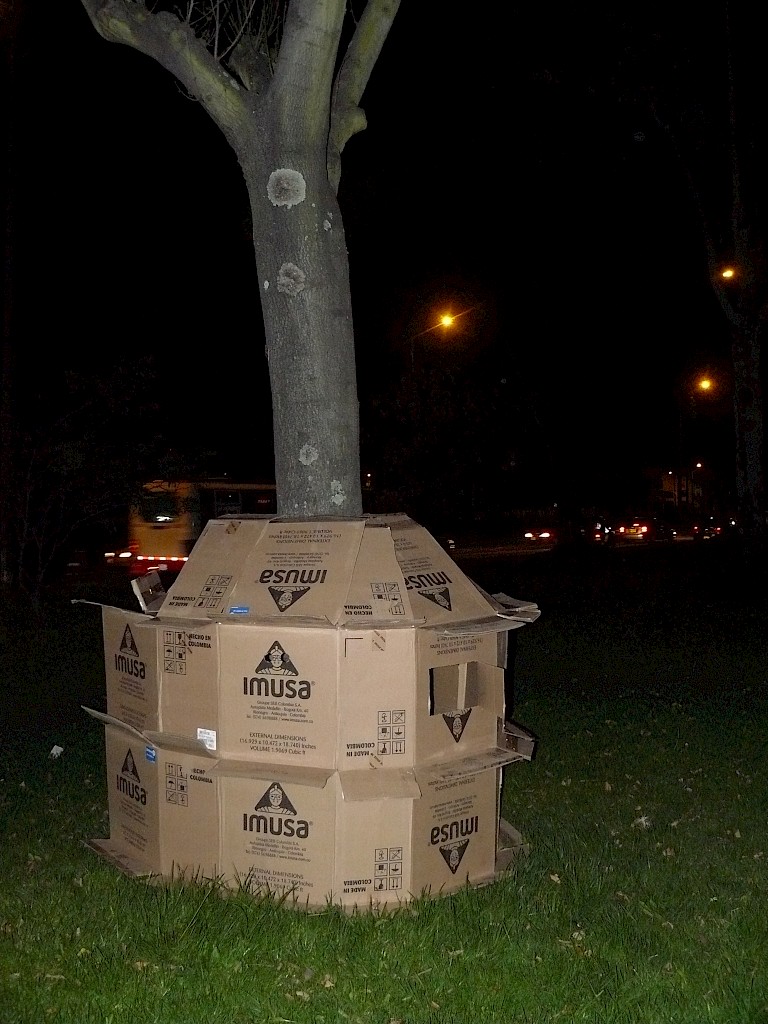 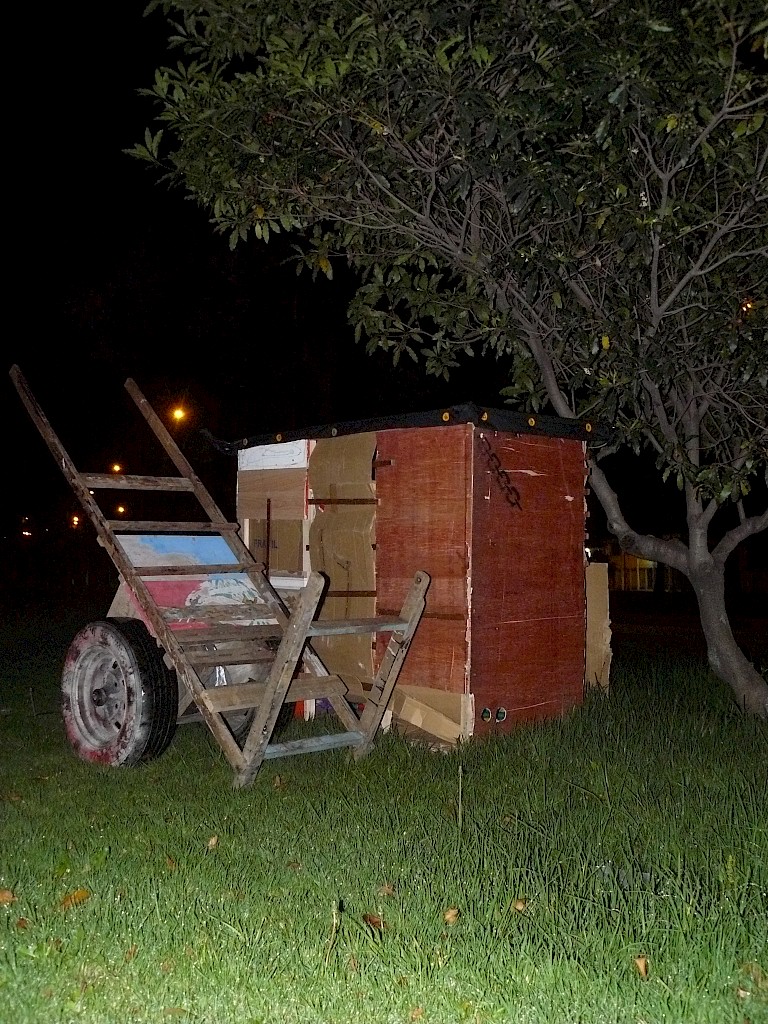 This project had many stages. Initially it implied a process of observation of the dynamics of construction of ephemeral architectures with the intention of becoming neighbors of those who inhabited the streets. This first stage showed that living as a homeless person is a completely different experience to living in a house, for it implies not having a fixed nor own place, something many of us who live in houses or apartments have normalized. These life conditions were explored in the next stage of design of the so-called Ranchos from their form, functionality and materials (obtained from the streets) to be placed to test. In a third stage and after testing its possibilities, an imagining and designing exercise started to better the structures from visual vectors. The process of designing, building and trying for one night these ephemeral architectures allowed them to comprehend and connect with a particular way of living the city.

These objects or ranchos started to be moved throughout the artistic spaces, however, the artistic occurrence happened in the experience of inhabiting the street and the city, it did not happen in the object created for this, and because of this the project ended just when it started to be understood from the artistic field as the production of museum worthy objects. This contradiction is the core value of Rancho which is thought to be done without money, without permission and in the street, in other words under the logics of inhabiting the streets, incompatible with the ordering systems of the world of which the artistic system is part, in this sense that Rancho is a site specific project that depends on its spatial dimension but also on its temporal and cultural dimensions.

This contradiction is something it is often seen with similar projects by many other artists around the world and something the art museum world still has to figure out.