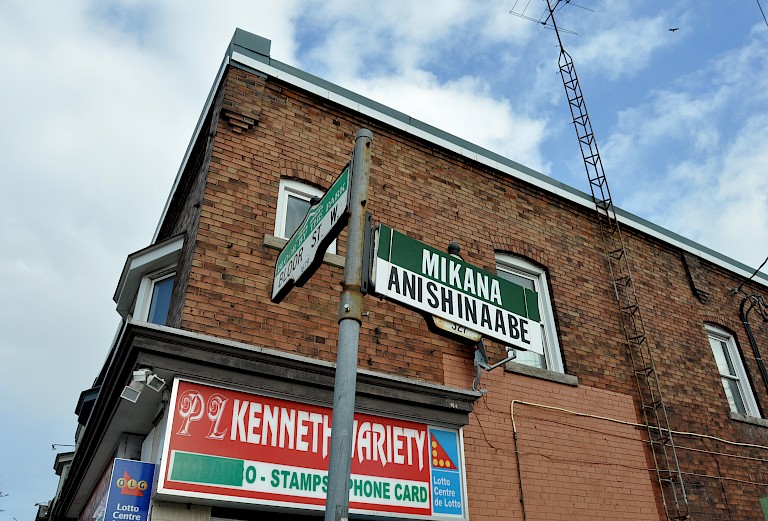 Ogimaa Mikana is the name of the collective that artists Susan Blight and Hayden King work under. Initially, it also served as a title for their series of public space interventions, now referred to as Reclaiming/Renaming.

The “guerilla” style project Reclaiming/Renaming utilized ubiquitous spaces for communication--street signs, historic didactic plaques and billboards—as spaces for Indigenous language-based interventions. These spaces, expected to the point of blending into the built environment, allowed the artists’ to disrupt expectations and puncture consciousness, revealing how “foreign” encountering Canada’s true native tongues is. Basing their work in public space, the artists drew a connection between Anishinaabemowin language and territory.

While Susan Blight and Hayden King self-initiated and self-funded the project on the energy and moment of their involvement in the Indigenous “Idle No More” movement, the attention they generated brought opportunities through neighbourhood and city involvement. The guerilla approach to making public art holds great potential for shaping audiences, institutions and environments.

The artwork is part of an ongoing continuum in the fight for Indigenous rights in Canada and world-wide and as such, has drawn international attention from press, galleries, curators and Indigenous and non-Indigenous publics.

The Ogimaa Mikana collective and series of works began in Toronto in 2013 and is now located across Ontario, Canada, Anishinaabeg territory. Reclaiming/Renaming, series of interventions, takes the form of billboards and imitation street signs and historical didactic plaques. Municipally installed street signs and historical plaques are intervened upon by covering the original text with decals, designed to have a similar aesthetic. Billboards are printed with Anishinaabemowin phrases. The artists’ first series of interventions were street signs that replace English street names with Anishinaabemowin ones. Historic plaque decals cover and replace colonial didactics offering prompts for thinking about the events of Canadian history in both Anishinaabemowin and English. Renaming/Reclaiming is meant to remind Anishinaabe people of their own heritage and remind non-indigenous people that this is indigenous territory with a 15,000-year history.

Ogimaa means someone who leads the people, and Mikana is a street, trail, or path—leaders trail. Their first work re-named a section of Queen Street West Ogimaa Mikana in tribute to the strong women leaders of the “Idle No More” movement, that both artists took part in. Ogimaa Mikana was also conceived of to introduce the revitalization of Indigenous languages, across Turtle Island, into the movement. Indigenous languages are all-but unfamiliar and unidentifiable to most Canadians with approximately only sixty active speakers. The Ogimaa Mikana project works against naming as a tool of colonial erasure.

Their first billboard “Giishin waanda kendamaawen gegoo, aabideg ntam g’gagwejikendaan maanda” or “If you want to learn something, first you must learn this.” reflects our early obligations to each other via the Dish with One Spoon wampum belt. All Canadians should consider themselves to live within the Dish and its three basic agreements. The Dish with One Spoon is a common diplomatic metaphor for Great Lakes Indigenous nations. It is considered among the early treaties between the Anishinaabeg and Haudenosaunee and also among the first that French and English settlers were welcomed into. The treaty imagines that we, as diverse peoples and nations, can live together peacefully in the same territory if we respect rights to mutual autonomy. But more, that we have obligations of mutual care, to each other and to the land we share. If we are serious about moving forward together in a good way, we must collectively re-learn these obligations.

Contrary to mistaken assumptions that place Indigenous peoples in the past, the work asserts that Anishinaabe people are present, in cities, still speaking their language, both living modern lives and practicing their cultural ways. Their goals to call this to attention for both Indigenous and non-Indigenous communities took off. One by one, the interventions appeared overnight without the usual press releases and announcements that accompany institutional projects. This seemed to work in their favour generating conversation and curiosity at individual, local, national and international levels. National print and broadcast news picked up the story as did international outlets such as Aljazeera, Huffington Post and NPR (National Public Radio, USA). At the same time, awareness of Indigenous issues was entering popular consciousness through movements such as Idle No More, the formation of Canada’s Truth and Reconciliation Commission and later, the Standing Rock protests. Ogimaa Mikana was in step with the moment and continues with momentum, currently working on larger projects. 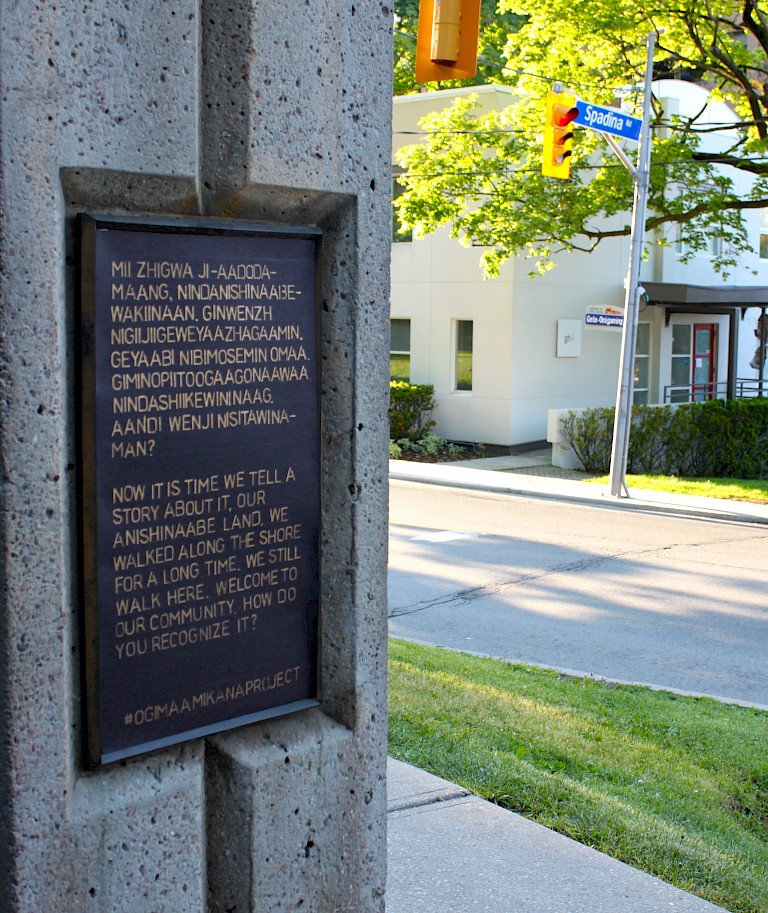 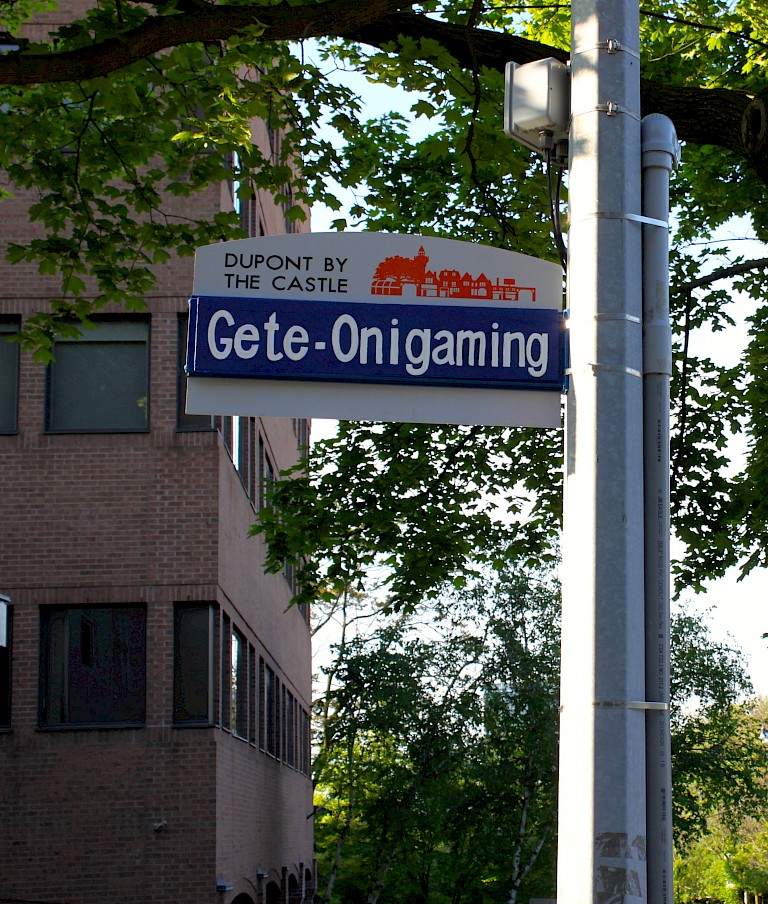 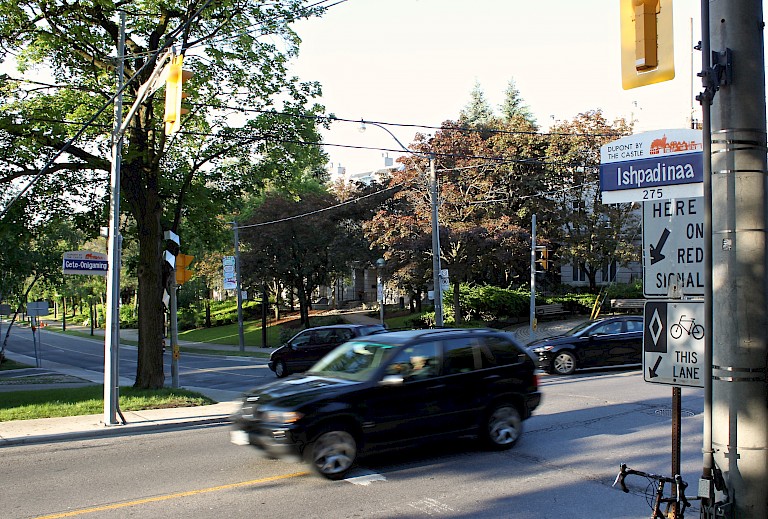 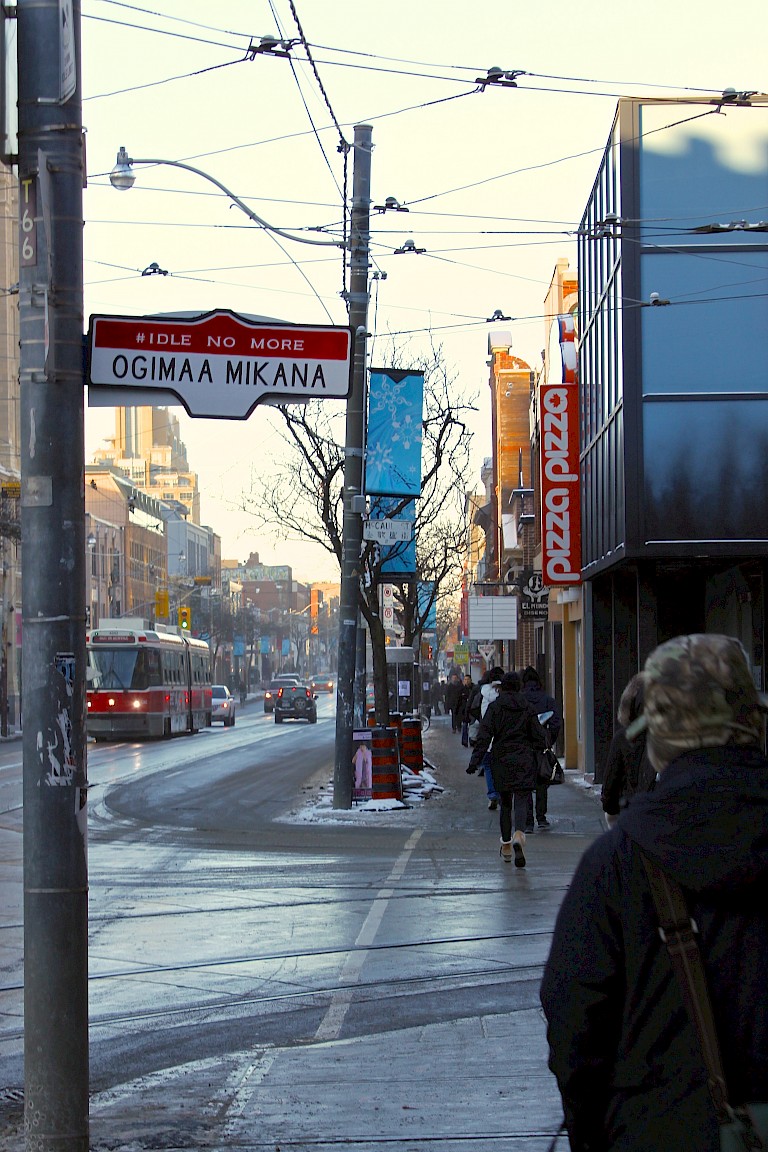 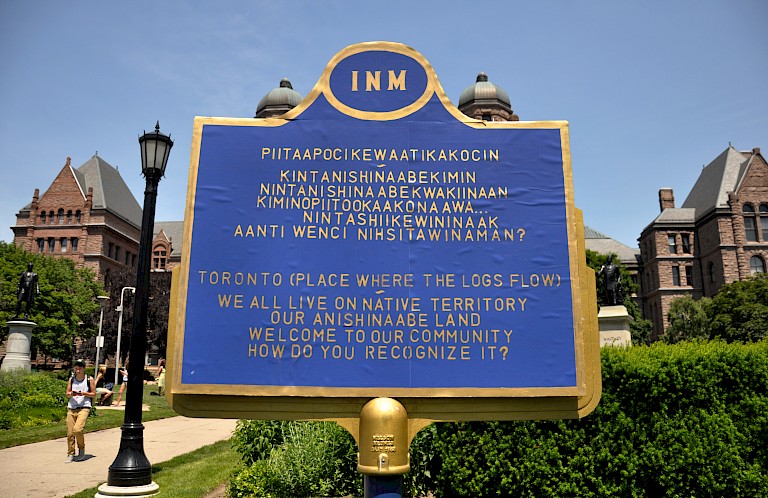