Guilmi is a small village situated on a hill in the countryside of the Abruzzo region in south-central Italy. It's so depopulated that no one can estimate how many people actually inhabit it. In 2010, when multidisciplinary artist and researcher Alessandro Carboni arrived in Guilmi, there were approximately 100 inhabitants and no children had been born in the last two years. Guilmi was going to be "turned off." The generational deterritorialization caused the decay of many buildings and the disintegration of the local agricultural economy. Alessandro Carboni decided to explore the human settlement in Guilmi through the perceptive potential of his body in motion, considering the people, the village and the landscape as part of a single energy system consisting of concentric rings by establishing physical and conceptual relationships with them. 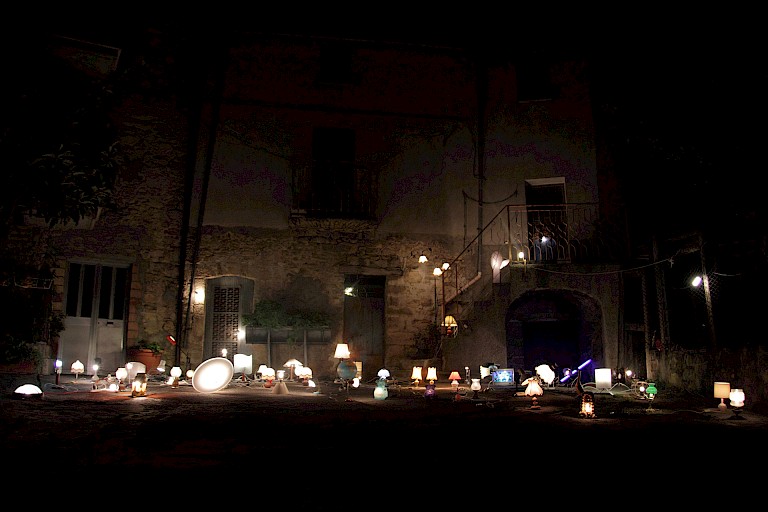 Rethinking Human Energies is part of the larger project entitled Overlapping Discrete Boundaries, launched in 2009 in Asia. In Overlapping Discrete Boundaries Carboni explored the urban tensions in 12 cities that are very different and distant from Guilmi, but with whom they share cultural and geological problems. Such problems include the geographic repositioning of entire communities due to natural and social factors, like frequent earthquakes and the lack of job opportunities.

Inspired by anthropologist Marc Augé and demographer Hervé Le Bras, Alessandro Carboni reflected on the increased relations between big urban centers and small rural ones. Despite the dwindling populations of rural towns, there is a global network that creates connections between urban and rural communities.

The project was developed in three stages: an exhibition of photographs, videos, maps, and drawings, produced after the tracing of the river's course from its source and the interaction with local people; the final performance run in a public square made ​​by 80 lamps donated by 80 families; the return of the lamps to the donors and the donation of photographic images to them, as evidence of the exchange of their human and material energy.

In the Asian metropolis city life is always moving and "turned on." In Guilmi the silence of the night is profound and during the day the only presence is the elderly who sit and watch life go by. The only time when cities lose control of their moving identities is during a blackout, which Carboni used in Guilmi during the performance. He then lit up the community for 40 minutes. He created a temporary interruption of the global network of urbanization, which in Italy could lead to the disappearance of its social, economic, and cultural heritage, consisting of small territories and their cultural diversity.

The collection of lamps in the form of a gift allowed residents to become familiar with the artistic research by recognizing it as form of the xenia's local tradition, a practice originally from ancient Greece that regulates the relationship between guest and host, which is still alive in Guilmi and in other small Italian villages.

The project, entirely self-sustained, created a sense of trust between contemporary art practices and residents that will allow cultural operators and local administrators to produce virtuous cultural interventions in the future. Moreover, the artist experienced an alternative method of geo-cultural mapping based on unexpected and unprecedented analogies developed in consideration of commonly held tensions worldwide between the expansion of modern urban and identity forms and the resistance of popular culture.