For three months, the Swiss city of Biel hosted a temporary ‘sculpture’by Thomas Hirschhorn, honering one of the most prominent novelist in Swiss literature, Robert Walser. The “sculpture” was a redefinition of sculpture itself, because what takes on a plastic form here is not made of stone, steel, or bronze. It is society itself that helped to develop this work of art. Thomas Hirschhorn’s project substantially expanded former notions of what sculpture is. It brings art into the city itself, onto its streets, and transforms the whole city into a space of reflection and interaction, inviting Biel’s inhabitants to actively participate themselves. In 2016 Thomas Hirschhorn and the curator Kathleen Bühler began doing field research in Biel, the city of Robert Walser’s birth, connecting with residents, clubs, artists, literati, and experts. This resulted in a multifaceted agenda. Every day the two offered events such as readings, walking tours, lectures, and children’s activities. All of this ultimately comprised the Robert Walser-Sculpture. 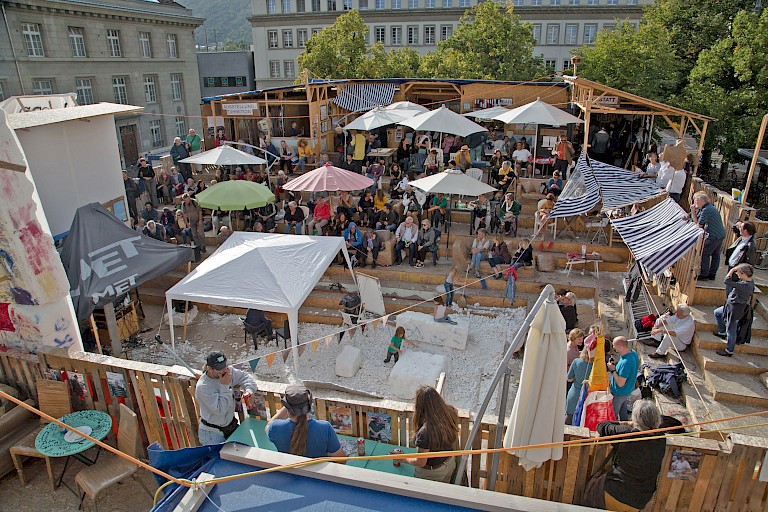 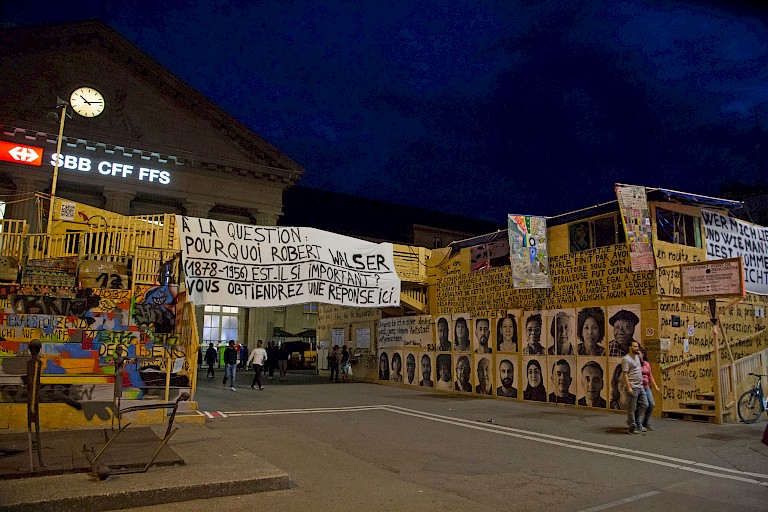 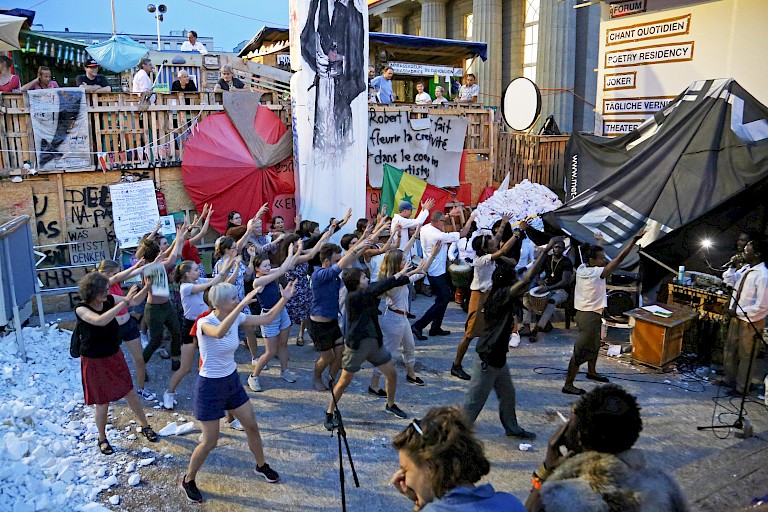 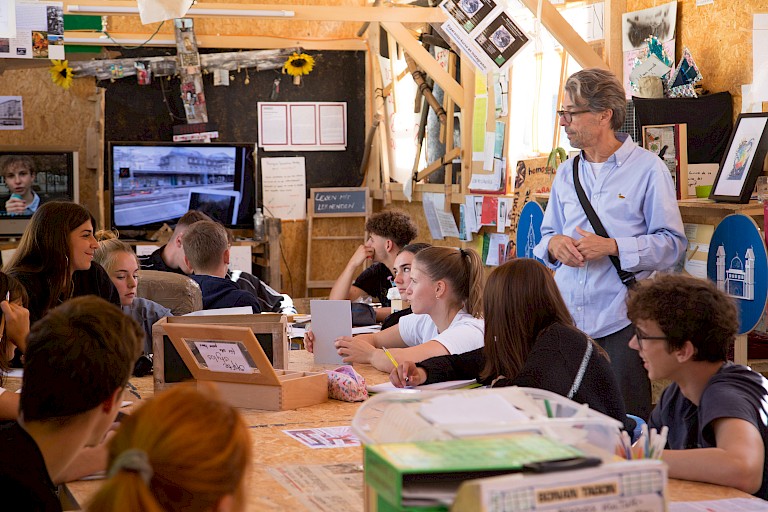 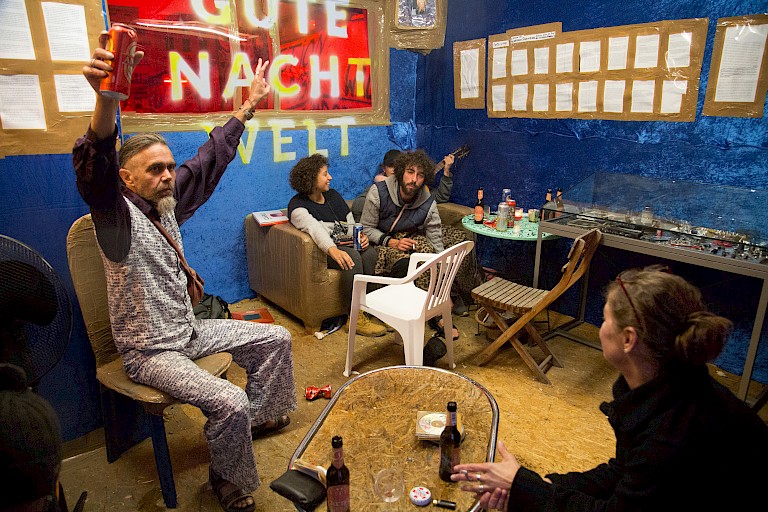 Thomas Hirschorn is an international renowned sculptor who has dedicated himself to politically charged participatory public art. The Robert Walser sculpture is part of a series of public works which Hirschorn dedicates to his favourite philosophers and writers, such as Gramsci Monument (2013), named after the Italian thinker Antonio Gramsci, Spinoza Monument in Amsterdam in 1999, Deleuze in Avignon, France, in 2000 and Bataille Monument in Kassel, Germany, in 2002.

For his public sculptures and monuments he has a preference for everyday materials, a choice he describes as political,materials that are universal, economic, inclusive, and carry no other value then what they are (plastic sheeting, card board, aluminium, packing tape, magazine images) with which he creates dense site specific environments. The process of making remains visible and becomes a metaphor for the individual and collective struggle to establish democracy, always a process of making, never settled. The precariousness of his works defie the traditional sense of Monuments, usually in durable materials meant to commemorate for eternity. Instead, Hirschorns monuments made in and with local communities are not made to last. Rather than material durability it is the intensity and ideas that he wants to give a lasting life in the lives of people. Implicated in Hirschhorn's work, viewers are invited to reflect upon that which they sofar may have been able to ignore in their daily lives. More than a commemorations Hirschorn wants to show with his monuments that art and culture can have an impact, change life and endure. His sculptures are always build in places where people live and the preperation is a very important part of the work, in which he participates closely with local residents which he pays for their labour on his works. Posing the ideas of intellectuals and writers he admires in the middle of neighbourhoods of people who might never heard of them, the democratic notion and a strong belief in the transformative power of art is at the heart of Hirschorns work.

Hirschhorns large scale interactive public work demands enormous time investment of both artist and curator, which started years previously, in engaging people in the work. It does not assume, as too many socalled participatory art works do, that people will automatically interact because the art work intends it, but the artist and curator/organization with whom he collaborates understands that for other people to become involved it means that he has to commit his own time and investment to the collaborative action. This is core to both the labour and meaning of the work, that it is not just a symbolic representation but a political gesture and action model for community building around public issues rather than according to lines of identity politics or placemaking. Introducing the work and ideas of ‘difficult’ intellectuals to the general urban residents shows a commendable belief in the democratic potential of art and philosophy and the conviction that this is a public good that concerns each and everone and should not remain in intellectual academic circles. In a tekst on the publication the curator writes it as follows: “this sculpture was a redefinition of sculpture itself, because what takes on a plastic form here is not made of stone, steel, or bronze. It is society itself that helped to develop this work of art.” That is of course a big statement, and perhaps given the enormous investment and amount of people they managed to draw into the project and the time and spatial scale it was present in their city, it might be a justifiable statement.

It would remain important to evaluate the quality of the people participating and the true extent to which they grasp what they are participating in, the content and ideas of both artist and the writer to whom the work is dedicated to evaluate its success as a whole. As I have not been part of the proces nor been able to see the work for myself this is not something I can comment on. But the many ways in which the artist questions the nature of sculpture, of monuments, of remembrance, of the dedication needed to artistic community work and democratic processes of public space makes it an important artistic practice. Unfortunately the projects website is no longer online. There is a catalogue of the project that is worth checking out.