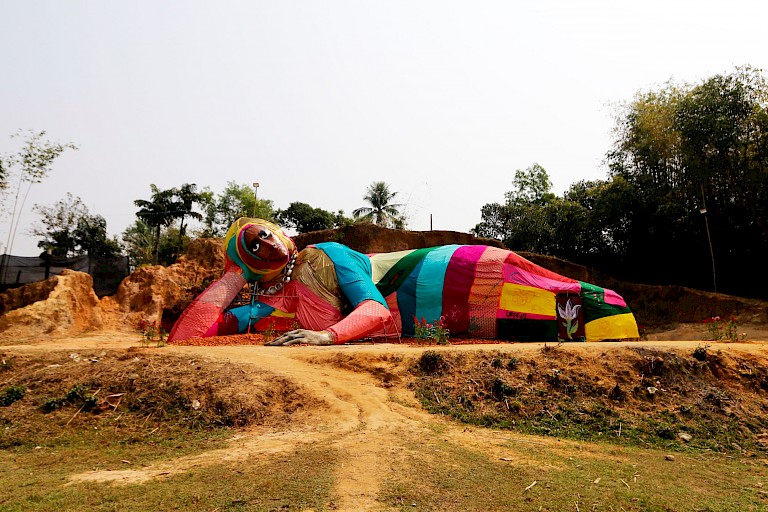 Rokeya is a monumental interactive sculpture created by Polish artist Pawel Althamer and ‘The Neighbours’ – members of his community back in Poland – at Bangladesh’s newly opened sculpture park – the Samdani Sculpture Park in Sylhet. Rokeya is a reclining woman – large enough for people to walk through and work inside - made of bright textiles stretched over a bamboo frame – built by Althamer, The Neighbours and 100 villagers and children from the area, along with patients of the Protisruti Drug Rehabilitation nearby. The sculpture houses a kiln and a community space for interactions with locals as well as workshops, exhibitions and other community activities. Since it’s completion in March 2017, the sculpture has engaged large numbers of local school children and community members and continues to remain a collective space for art and public engagement.

The title Rokeya was given to the sculpture by the local children, after Begum Rokeya Sakhawat Hossain (1880 – 1932), a Bengali writer, educator, social activist, and advocate of women's rights who pioneered female education in Bangladesh.

Rokeya, one of the first sculptures created for the newly opened Samdani Sculpture Park, is a symbol of modern Bangladesh. The brand new sculpture park is not on the tourist map yet, so Althamer and friends have basically created a sculpture meant primarily for the use of locals from villages around Sylhet area. Also helping with the sculpture were patients from a drug rehabilitation centre, and the constant engagement with the villagers helping with the sculpture helped them socialise purposefully, and also helped reduce the stigma they themselves faced. The sculpture plans to be a centre for many creative activities in the future.

Commissioned by the Samdani Art Foundation, Rokeya began with Althamer’s first visit to Bangladesh in 2015, courtesy the foundation and artistic director Diana Campbell Betancourt. During this trip Althamer travelled to Sylhet and engaged with the community there. This engagement led to plans for return and a Sculpture Congress with Althamer, the Neighbours as well as local community members – and led to the creation of Rokeya. Arriving in Sylhet with only a basic sketch and a rough concept for the final sculpture. He set this out in the ‘Sculptural Congress’ in a series of workshops with patients from Protisruti and local school children. To create Rokeya’s main form, a group of patients from Protisruti came to Srihatta to assist Paweł and his neighbours with weaving the bamboo frame, alongside children from local schools. Rokeya’s colourful fabric costume was stitched by nearby village women from local textiles who also helped to drape the fabric. These elements were then merged into one sculptural form and fired within Rokeya’s internal kiln around which the community’s, Paweł’s and his neighbours’ collaborative sculptures were exhibited. This kind of community engagement is extremely new to an area such as Sylhet, and to Bangladesh at large. It is also now the focal point of the Samdani Sculpture Park. 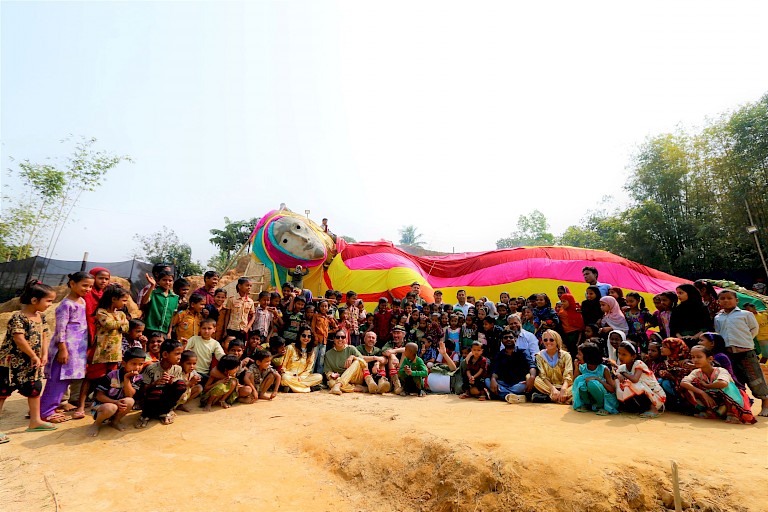 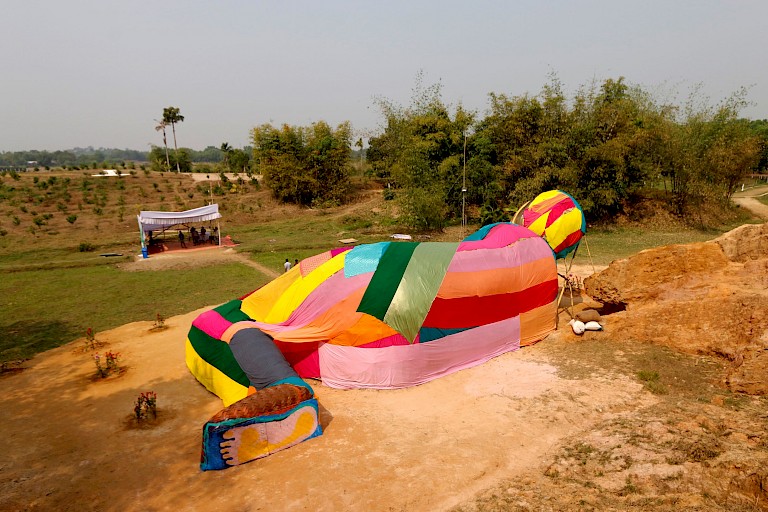 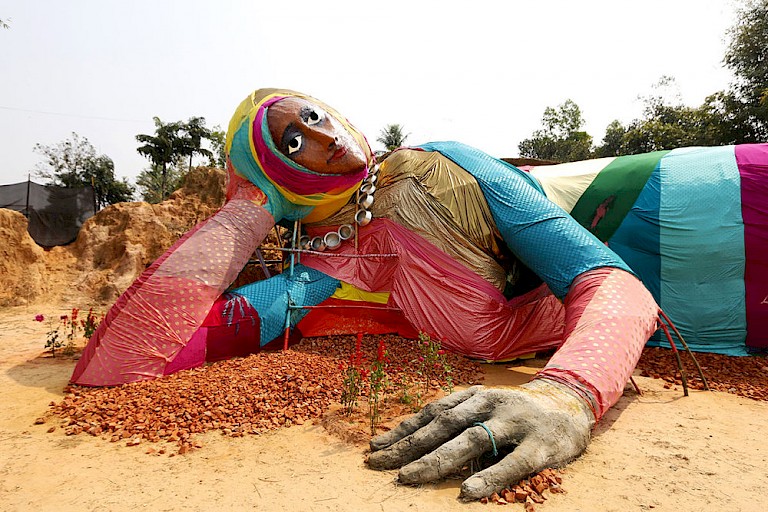 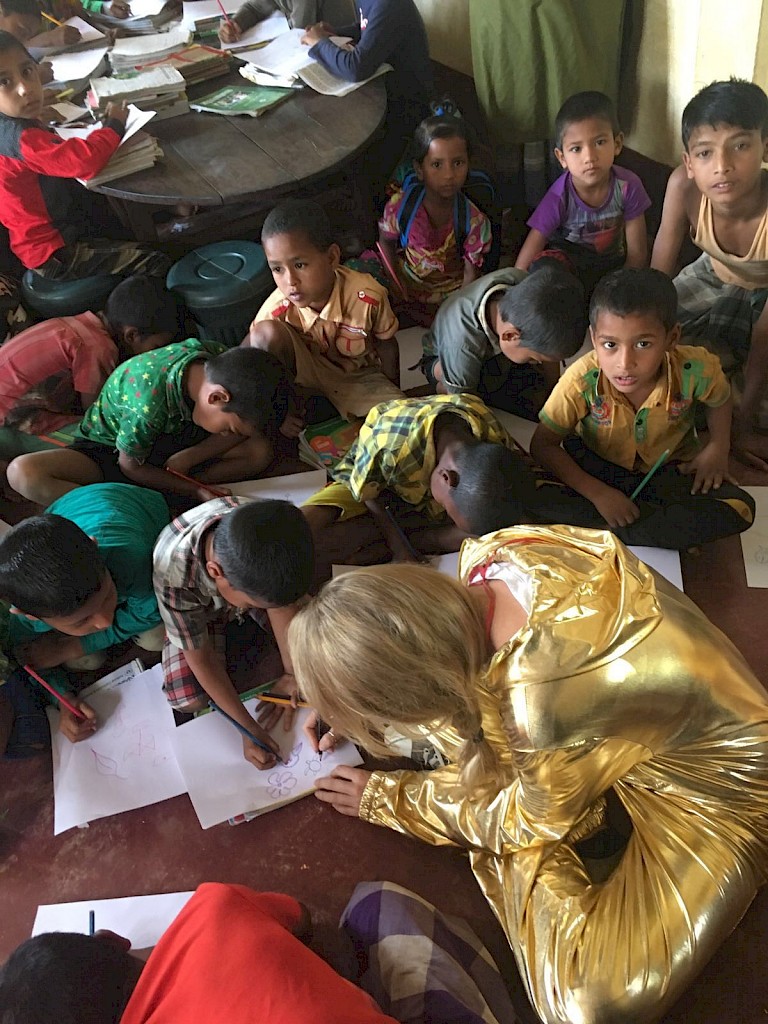 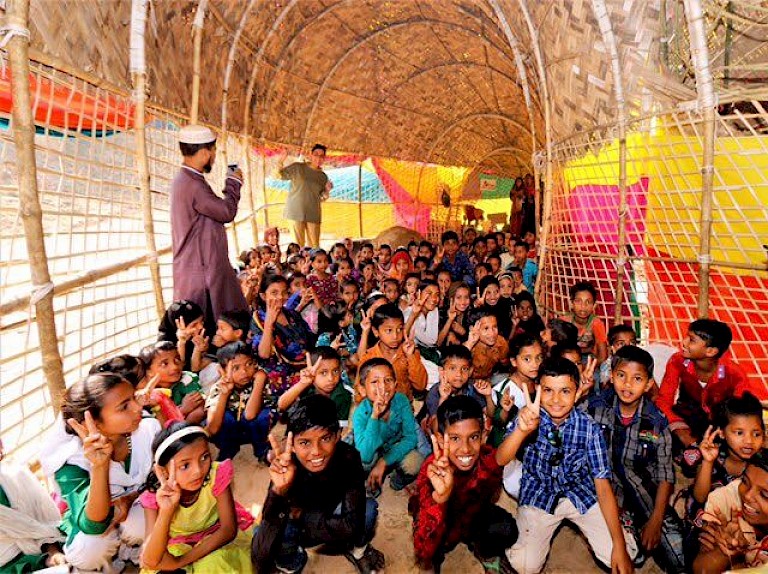 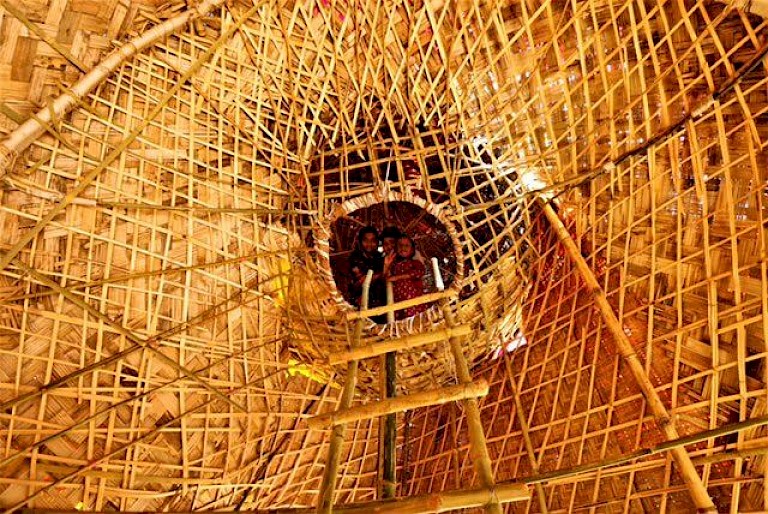