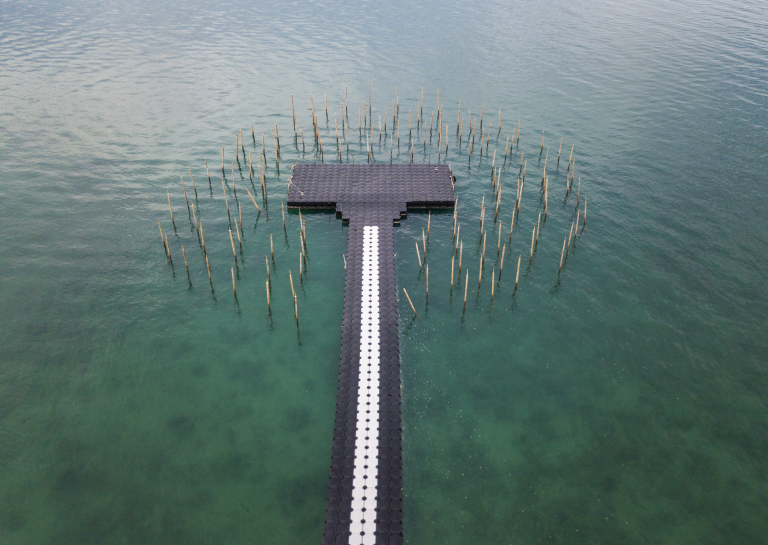 Rumors from the sea

Rumors from the sea is a site specific sound installation composed of hundreds of bamboos, usually used in Thailand as seawalls to slow coastal erosion, with a flute at their top. A bamboo-flutes orchestra played by the waves, performing unique concerts 24 hours a day, depending of the tide, the direction, tempo and force of the waves. As a potential listener, you are invited to define the beginning and the end of the music piece played for you.

Project done in collaboration with the Bambugu’s builders and the students of Ban Klong Muang School. We imagine together a creature that could come from the sea to help humans to fight climate change: the installation is a call to listen to it singing, it screaming, while it tries to stop the waves. During a musical performance, the children have been playing flute on the beach to call this being, resulting in a short film. 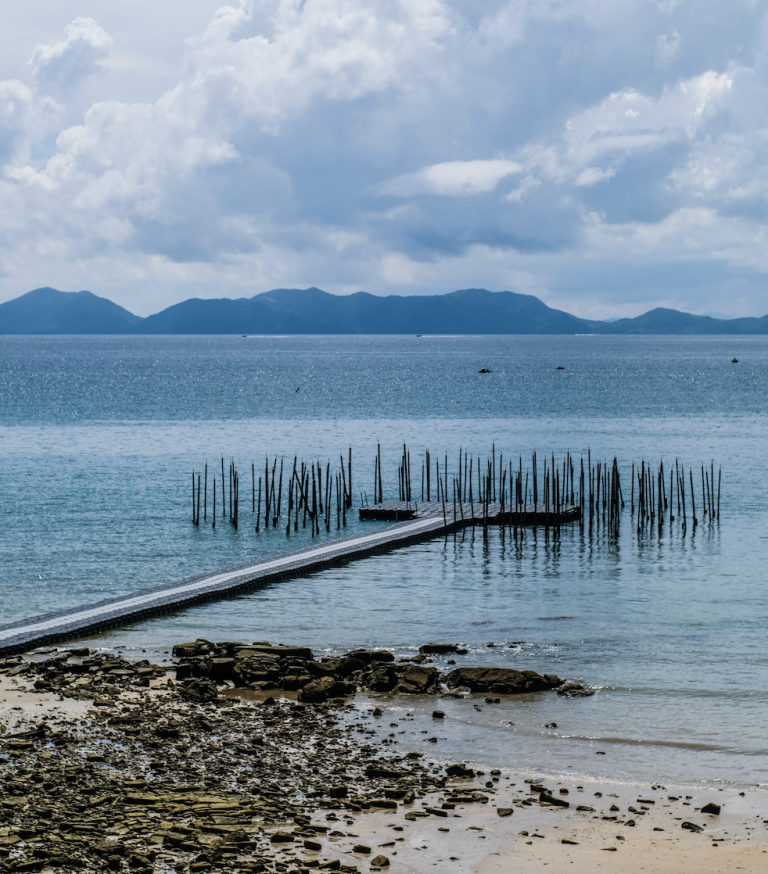 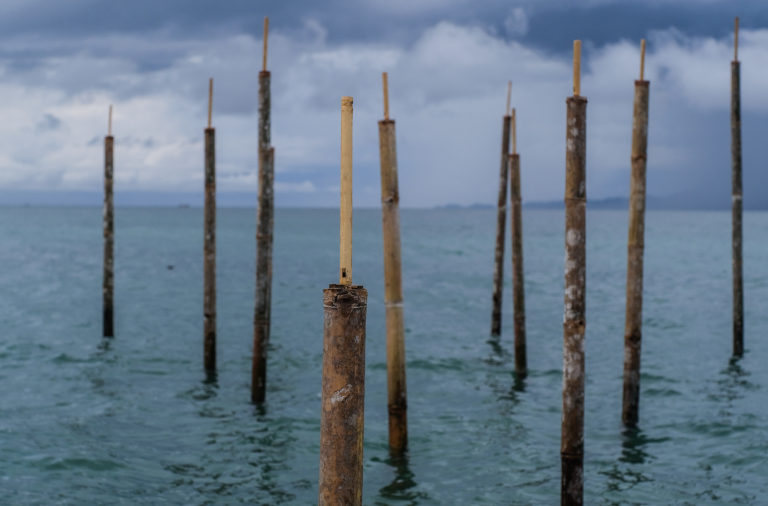 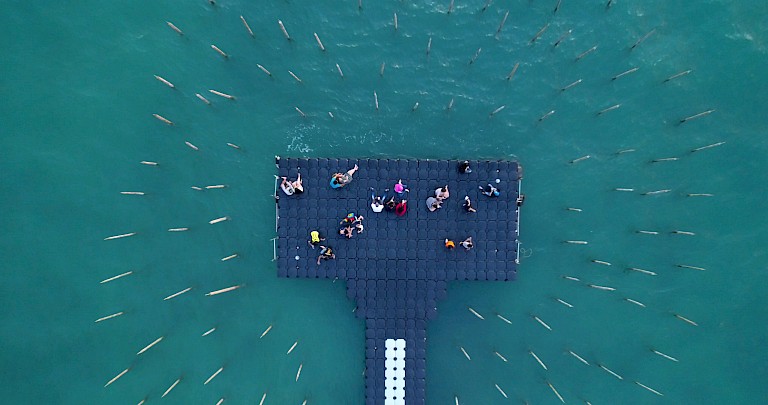 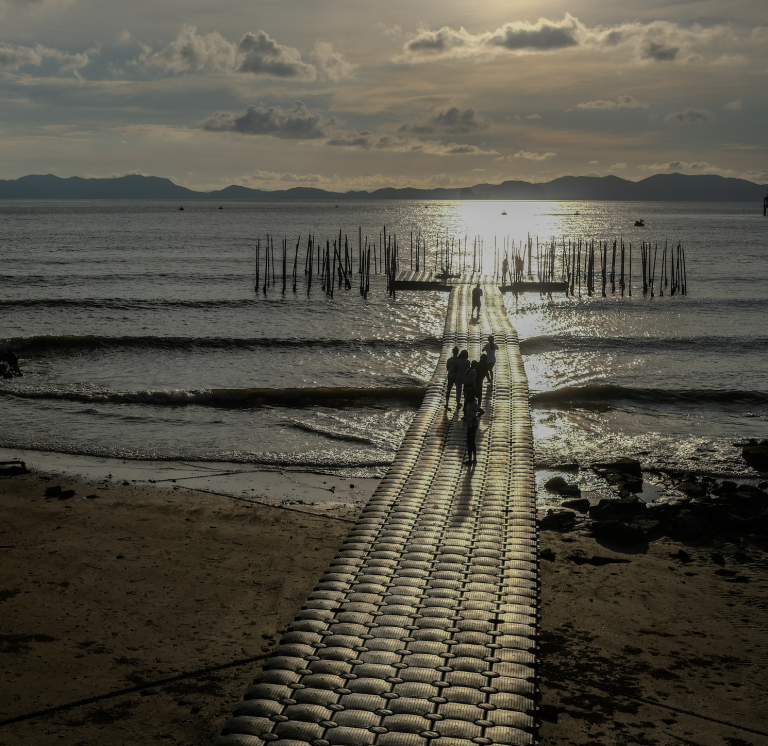 The Office of Contemporary Art and Culture (OCAC), Ministry of Culture in Bangkok, began organising the First Thailand Biennale in 2016. As a national initiative of contemporary art, the organising institution of the biennial planned to choose different cities and sites in Thailand for each edition. For their first Biennale it was decided it would be staged outdoor on natural sites around Krabi. Krabi, with its majestic mountain ranges, beautiful beaches, stunning coasts, and hun-dreds of fertile islands, certainly had an abundance of locations for artists to work with.

Blume was one of ten artists invited to participate in the Biennale by proposing a site specific work, Rumors from the Sea, a sound installation inspired by the form of the bamboo seawalls used in Thailand as a simple method to battle against coastal erosion. The installation consisted of hundreds of flute devices, essentially lengths made from bamboo, similar to the material used to slow down the current from hitting and eroding the shore.

The project was a tribute to the perseverance of those communities. Simultaneously, working with students from the Baan Khlong Muang school, the artist organ-ised a workshop to enable each of the students to make their own bamboo flute. These devices will be used to generate a sound composition for a bamboo-flute orchestra/ installation, played by the waves. The project devised by Blume and the students conceived an imaginary narrative about a creature that could come from the sea to help humans to fight climate change: the installation is a call to listen to it singing, it screaming, while it tries to stop the waves. During a musical performance, the children play their flutes on the beach to call this being. This aspect of the work was recorded by Blume as a short film that accompa-nied the site specific sculpture. The children’s flutes produce a low monotone dirge not dissimilar to the sounds one hears around ports and foghorns. The bamboo flute orchestra/sculpture emits an undulat-ing dirge based on the frequency of the waves and the strength of the tides, the sound it produces gives vo-calization to teh imaginary sea creature, while also sounding like dozens of injured animals, like seals or dolphins trapped in a net. The resulting sounds are somewhat chilling.

Seen within the context of the military coup in 2014, followed by the death of the former monarch and the elevation of a new king who is widely de-rided, both domestically and internationally, cou-pled with a flagging economy and several financial scandals, the announcement of a new biennale timed for the same year as the new inaugural Bangkok Art Biennale could be viewed rather cyni-cally as the states appropriation of contemporary art as a means to revive its reputation and demonstrate its open-mindedness. International artists then, are in the somewhat precarious posi-tion of potentially playing the role of useful fool.

Such social practice projects as Blume’s present ideally under such circumstances: mass participa-tory project that requires the attendance of villag-ers and children to both make and perform in ser-vice to a artwork which alludes to the history and ingenuity of the local people and the international problems that threaten their way of life. These projects have a way of providing momentary visibil-ity to marginalized groups and “small scale, indig-enous solutions” which do little to ameliorate or halt the large global scale issues being alluded to, nor providing communities any leverage with their governments to contribute to short or long term plans and solutions, such as, in this case, relocating villages, disaster planning, building seawalls, diver-sifying the economy, moving away from the sort of art tourism that encourages carbon intense travel and infrastructure.

Meanwhile, site specificity provides a thin film of cultural specificity - a local issue is identified, local solutions found, local materials used, but the out-come is strictly within Blume’s range of practice as a sound artists with an interest in ambient field recordings. While there are usually real tangible benefits to the local community in terms of an in-crease in tourism and infrastructure spending to support such projects, they more often serve to “art wash” local governments and benefit only a few major suppliers, hoteliers, and businesses.