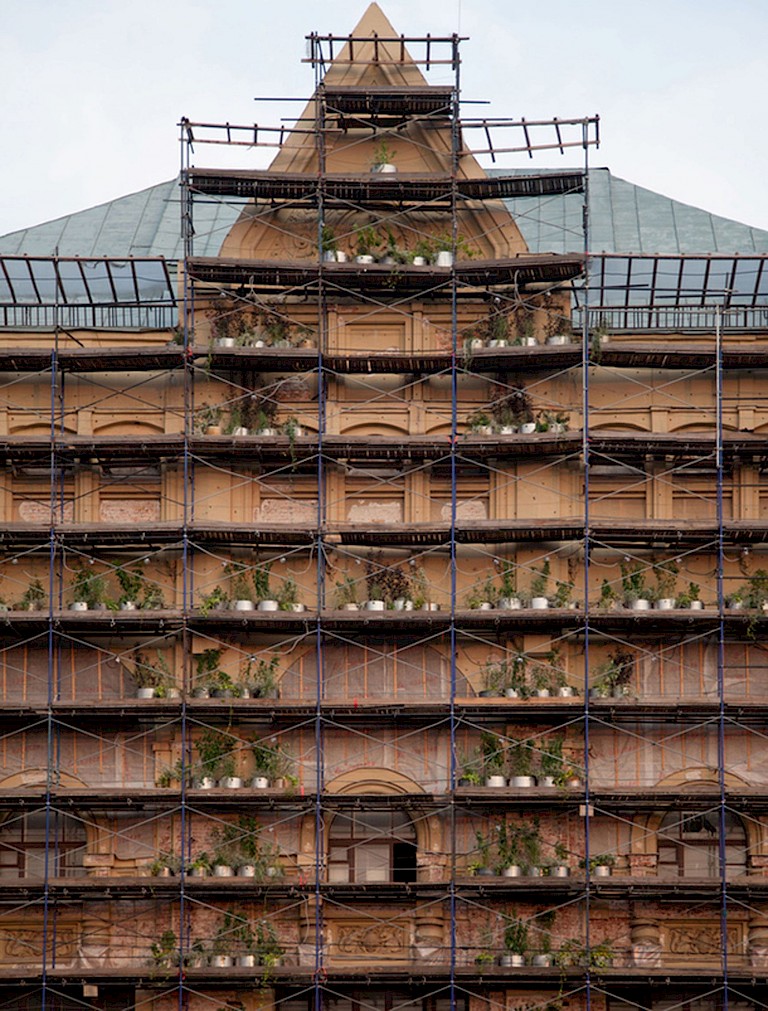 Anna Krivtsova’s work «Scaffolding» was installed on the facade of the main building of the Polytechnic Museum in Moscow for one month during the summer of 2016. The artist used the construction scaffolding that had been placed there for the museum’s long-term renovation process and was temporarily unused. In Moscow such scaffoldings can sometimes substitute the facade of a building for many months and years, and have become a recognisable feature of the cityscape. Anna Krivtsova filled the construction with live shrubs and trees, turning it into a vertical garden. At night the greenery was bathing in the electric light and its mild glimmering could be seen from far away.

As a further step, Anna suggested that the plants could travel through the city, inhabiting the suspended construction and renovation sites. So far, the project was implemented only in its basic format — as a temporary installation on the building of the Polytechnic Museum, located in the centre of Moscow, next to Lubyanka. As a public space, this area presents quite an intense and fascinating context. Lubyanskaya Square (or simply Lubyanka), a historical part of the city that emerged as early as the 15th century, is certainly most famous for the grandiose Lubyanka building. Constructed in the end of the 19th century for a big insurance company, it eventually became a long-term location for the headquarters of the KGB, with Lubyanka prison in the inner part of the construction. At the moment, the building hosts the Federal Security Service of the Russian Federation (FSB). To the left of it stands Detskiy Mir («The Children’s World»), the largest children’s department store in Europe that was constructed in the 1950’s — its main atrium features the world’s largest mechanical clock, Raketa Monumental.

And on the opposite side, to the right of Lubyanka building, stands the Polytechnic Museum that has been under reconstruction since 2013, which is supposedly going to be finished in 2019. Opened in 1872 in a temporary location, it is one of the oldest science museums in the world. The main building was under construction for another 30 years, various parts of it opening from 1877 to 1907. Right in front of the FSB there is a monument to the victims of the Gulag — a simple stone that comes from the Solovki prison camp. The Solovetsky Stone was erected in 1990 by Memorial, the Russian historical and civil rights society. Lubyanka is 900 metres away from Red Square, and borders with Kitay-gorod, the historical ‘inner city’ of Moscow.

«Scaffolding» did not make any explicit comment on the site where it was located, but instead offered a subtle ecological intrusion that was by itself significant, given such a dense environment. The work spoke the seemingly neutral and nearly glamorous language of urban aesthetics, while highlighting the conditions that made the public spaces of Moscow inhospitable and polluted (many of the long-term construction or ‘renovation’ works are being infinitely suspended as both an outcome and a cover-up for the real estate development corruption). «Scaffolding» was highly visible, eye-pleasing, and completely accessible to a broad audience.

At the same time, it was far from being a conformist decorative embellishment or an artwashing device — quite on the contrary, while entering the site as a decoration, the work opened the way for a soberly critical perspective. The implementation of Anna Krivtsova’s project was made possible through the cooperation of V-A-C Foundation and the Polytechnic Museum. «Scaffolding» was worked out in collaboration with the architect Levan Davlianidze, who developed a mobile modular system for the plants, and the landscape designer Lelya Zhvirblis, who selected the varied plants that were best suited to the local climate.

«Scaffolding» was shortlisted for the V-A-C Foundation’s programme Expanding Space, and brought to life within it accordingly. Expanding Space was an international open-call launched by the Foundation at the beginning of 2015, and invited artists, architects, and designers to submit ideas for installations that would use the potential of art in the urban environment of Moscow. As claimed by the organizers, the initiative for Expanding Space was conceived as a way in which the concept of art in urban environment — its place, purpose and method of production — might have been investigated and explored.

The project aimed to be an instrument by which art would flow beyond the usual confines of ‘the city park’ and in so doing, pose timely questions about the commodification and status of public space and the relationship between community and environment. The jury for the programme consisted of Mikhail Alexeevskiy (Center for Urban Anthropology, Design Bureau "Strelka", head of the Center), Cecilia Alemani (curator, program director for High Line Art, New York), Anna Bronovitskaya (Associate Professor of the Moscow Architectural Institute, director of Research in the Institute of modernism), Ekaterina Girshina (Strelka Institute for Architecture, Media and Design, director of the summer educational programme), Alina Saprykina (Museum Association "Moscow City Museum", director), Georgiy Nikich (Moscow Exhibition Halls Association, teacher), Maria Privalova (Moscow Institute for Social and Cultural Programmes, director), Elena Yaichnikova (Moscow Museum of Modern Art (MMOMA), curator, researcher). In 2018 V-A-C Foundation issued two volumes of the eponymous publication «Expanding Space» — the collection of public art cases shortlisted for the project. Many of them were never carried out because of the municipal regulations and bureaucratic problems, therefore, the book provided an insight into the artistic realm of potentialities that, for this or that reason, turned out to be incompatible with the present public conditions.

Nonetheless, «Scaffolding» managed to be not only a harmonious intervention into the eclectic context of the downtown Moscow that immediately made the building of the Polytechnic Museum glow, both in the sunlight and at night, but also an example of efficient cooperation between the private and the state-run institutions. In addition to that, it was an example of how a very low-key work can be introduced into the public space that is permeated with obstacles and limitations, and how it can transform it gently without any visible confrontation. Although the change in urban ecology that «Scaffolding» brought to the area was rather symbolic and temporary, the artwork was so eye-catching and significant at the time that it definitely left a trace in the memory of every passerby. 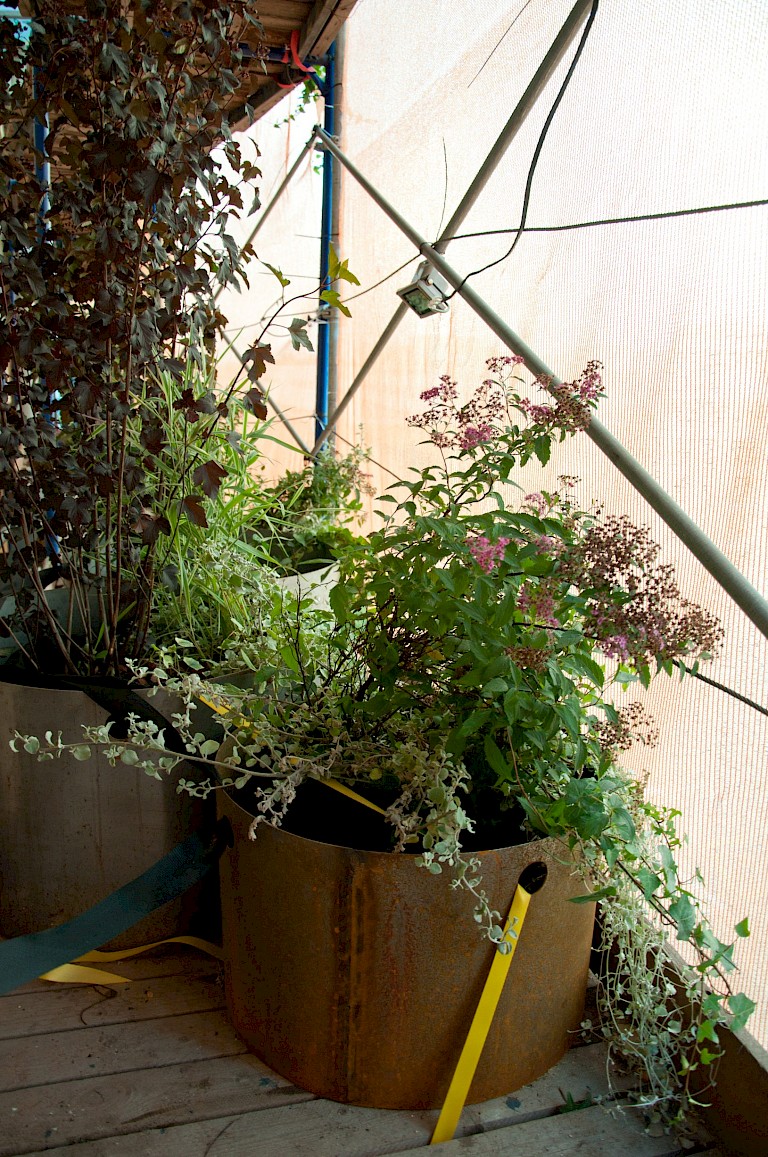 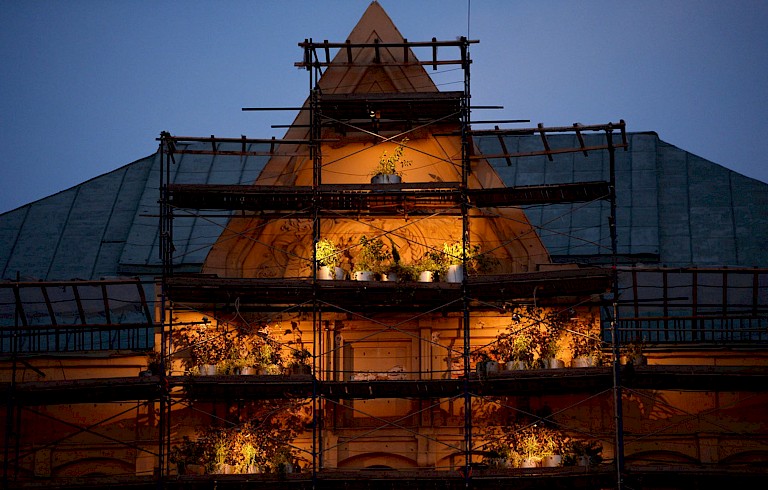 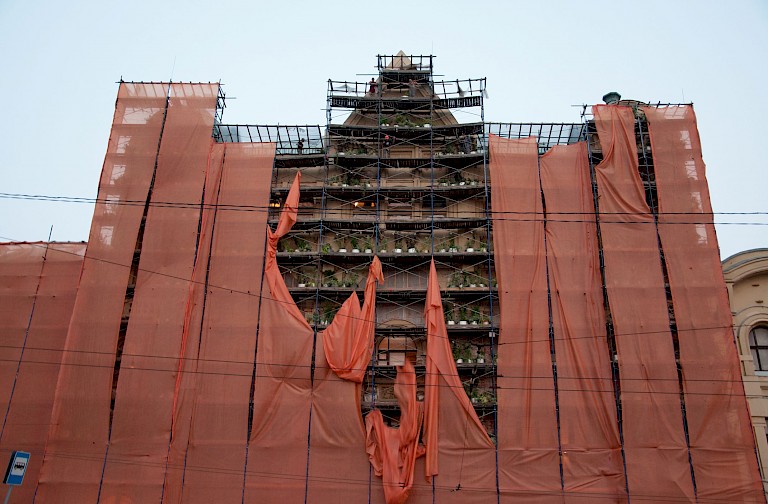 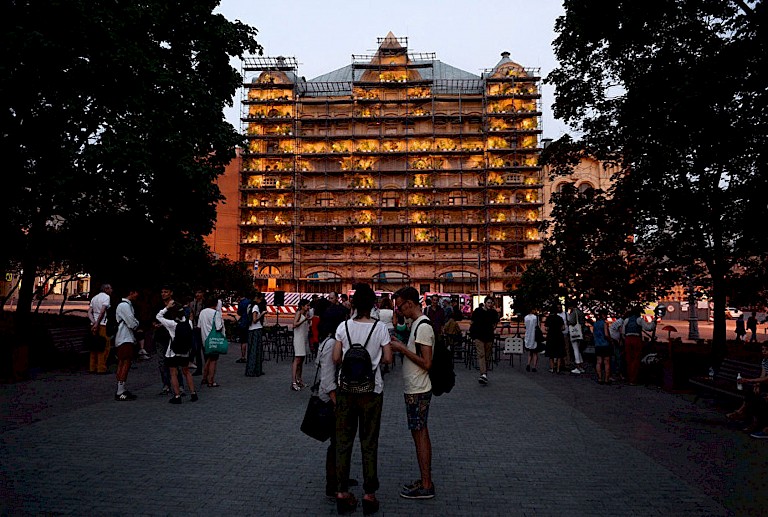 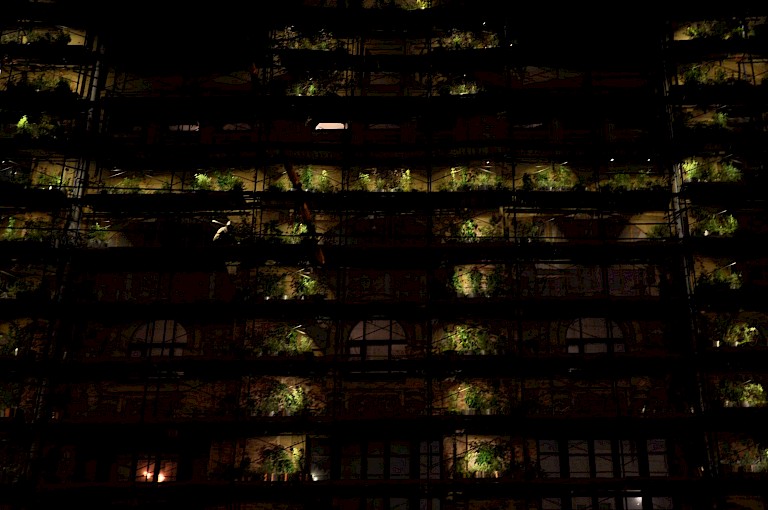