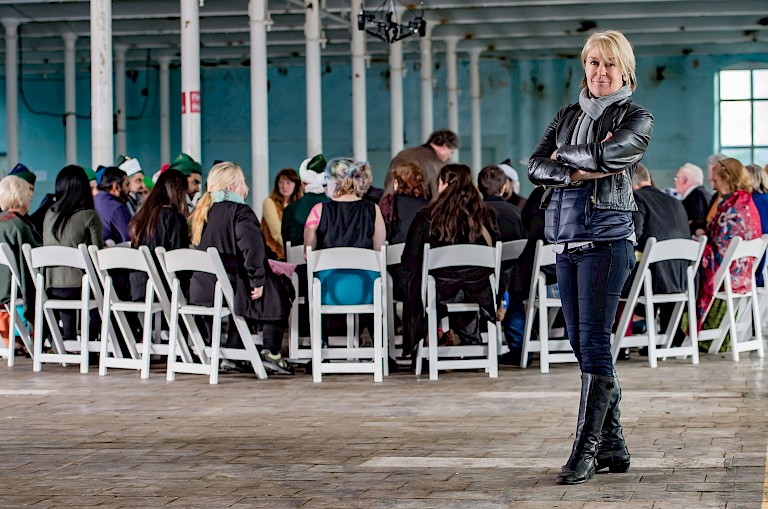 Shapes of Water - Sounds of Hope

Shapes of Water - Sounds of Hope (2016) is participative artwork produced by Suzanne Lacy and artist collective In-Situ. The project was realised in the small town of Brierfield, in the Borough of Pendle, Lancashire, England. The work’s title references its location, a landscape shaped by water, and to aspirations for the project. Historically, the local river brought wealth and prestige to the area, powering the first machine-driven weaving looms in England. During the 19th century Pendle was a thriving centre of industry and at its peak the Brierfield Mill produced 85% of the world’s cotton goods. The industry was the area’s the main employer until well into the 1960s, but in 2006 production ceased, bringing significant change to the region and its people. The town that was once a global powerhouse now faced upheaval.

Shapes of Water - Sounds of Hope began in 2015 when Lacy was invited to research two concepts: the demise of the textile industry as an economic driver in the North West of England, and the increasing separation of Asian and White communities who used to work together in the area’s vast textile mills.[1]_ Involving many local residents and collaborators from music, religious, and community organisations, the project was developed collaboratively and culminated in an event-performance at the former mill[2]. Shapes of Water - Sounds of Hope acted locally but created a timely and significant national conversation on race, work, capitalism, and how globalised trade in products and people continues to resonate across the world._

After WWII, the Lancashire cotton industry struggled to compete with the scale of production on the Indian sub-continent. In a bid to save Brierfield Mill automatic looms were installed and jobs offered to workers in Pakistan, already skilled operators of the machinery. As the Pakistani workforce grew, families immigrated and new communities were created. However, it was only at the mill that the new and existing communities mingled, learning about each other’s cultures, foods and habits. Differences in religion and cultural custom were significant, with common areas and activities of connection not shared by both. When the mill closed, the White and Asian communities of Pendle lost a common meeting ground and the divide between the two cultures has only become magnified. Shapes of Water - Sounds of Hope aimed to help these communities find their way back to one another.

The art work was a response by Lacy to bridge history, culture, and identity through re-building community relationships and restarting conversations about public commons. Lacy and her collaborators worked closely with the community in a series of monthly meetings and singing sessions, exploring the history of the former mill, area, and local vocal traditions.[3]_ Shapes of Water - Sounds of Hope took inspiration from Shape Note singing and Sufi chanting, both centuries old traditions of civic and religious expression. Shape Note has strong roots in Lancashire, while the Middle Eastern Sufi tradition is commonly practiced by Pendle’s Muslim community. “I have wanted to work with shape-note music for about 15 years” Lacy commented. “…It is class-reflective, it’s embodied, it’s highly participatory, its structure is democratic, and it’s quite visceral.” An open call for participants across the multicultural community created a group to learn Shape Note and Sufi singing together over a two year period. Music is one of the most powerful conveners of unity and collective emotion, however its ability to unite can often supplant dialogue and gloss over important issues. To counter this a regular format to the meetings was established - learn to sing together, then eat together, and talk together about critical local issues. The result was a new artwork, culminating in the three-day event at the mill.[4] To document the journey and culmination of the art work, Lacy and her collaborators produced a film featuring local residents, interviews with former mill workers and their families, and performances of Shape Note and Sufi chanting during the three-day event.[5]_ One year later in September 2017 the community were again welcomed back to the mill, a symbolic remnant that defined Pendle’s landscape and the lives of its people.

The community meetings which shaped Shapes of Water - Sounds of Hope provided a safe place to connect and have critical conversations across a growing cultural divide. However, beyond the re-establishment of dialogue, cooperation, and shared space, the project allowed something more to be generated, something less tangible but exceptionally powerful.In working with vocal traditions that facilitate congregational singing, Suzanne Lacy captured non-verbal ways of creating cohesion. Participants in Shape Note are seated in a square around which the four vocal parts - treble, counter, lead and bass - sing with one another and to one another, rather than facing outwards to an audience. Similarly, Sufi chant is sung in an inward facing concentric circle, with the intention to let human diversity be subsumed in unity and concord. Yet still, beyond these physical formats, the role of voice and music to connect people is key to Shapes of Water - Sounds of Hope.

Shapes of Water - Sounds of Hope offered a way to exchange collective disengagement for connection. Music and song go beyond religion, culture, and history. One of Suzanne Lacy’s collaborators in the project, musicologist Ron Pen, writes “Musical harmony forges social harmony. Active, engaged participation in communal vocal expression in both Sufi chanting and Shape Note singing complements diversity with unity. Our distinct individual personalities are sustained, yet our commonalities are reinforced through the act of shared music.” Sociologist Émile Durkheim introduced the term ‘collective effervescence’ to describe an experience of connection, communal emotion, or “sensation of sacredness” that happens when we are part of something bigger than ourselves. _ Durkheim proposed that during these experiences our focus shifts from self to group, and here we find the crux of Shapes of Water - Sounds of Hope. Singing together is being connected - breathing together, being in the moment together, and coming together in shared emotion. Experiencing this ‘collective effervescence’ created moments of strong unity for Pendle’s culturally diverse population, ultimately bringing these communities together for three days when the former mill was again returned to its community.

[3] The Industrial Revolution was key to Lancashire’s development, but less known is region’s role in the creation of industrial broadside ballads and Lancashire dialect work songs..

[4] During the event residents who had not been involved in the community meetings were invited to take part by observing performances, participating in singing sessions, and attending a large banquet.

[5] Documentation became a film installation under the title The Circle and the Square (2016), first shown to the Pendle community in 2017, then at the Biennale of Sydney (Australia) in 2018. The film installation at the Mill included multi-vocal conversations about the past, present and future of the region from over 70 interviews. A comprehensive Resource Room was created, and the community offered tours of the mill and performances. 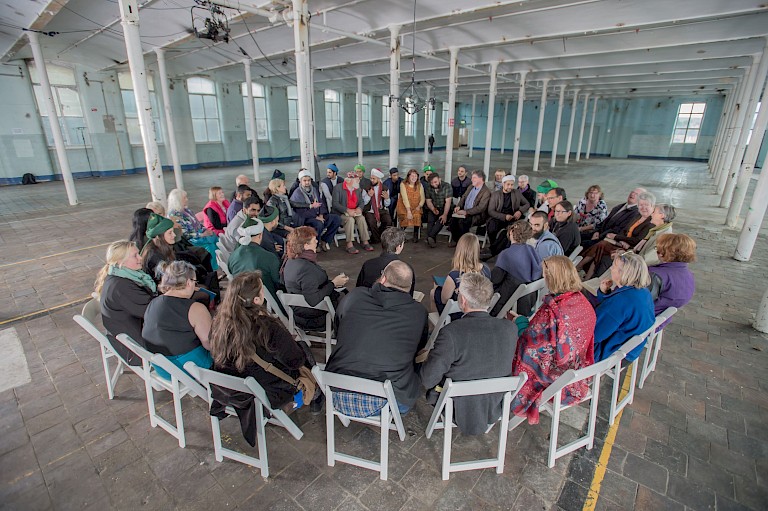 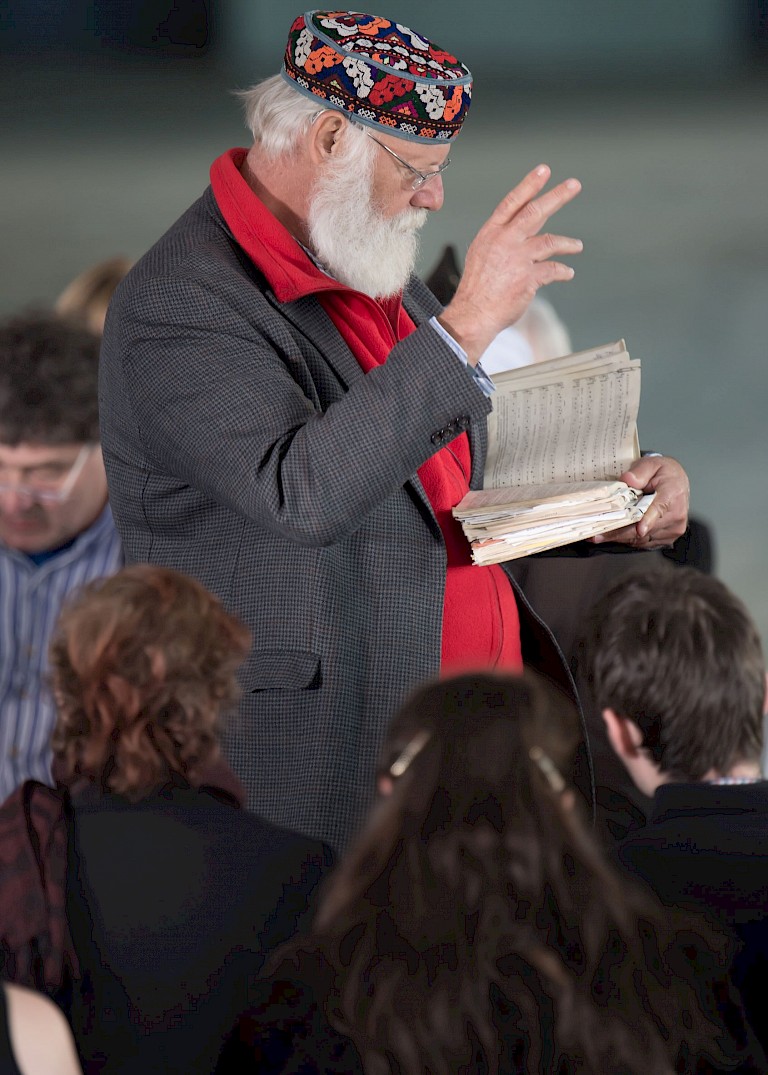 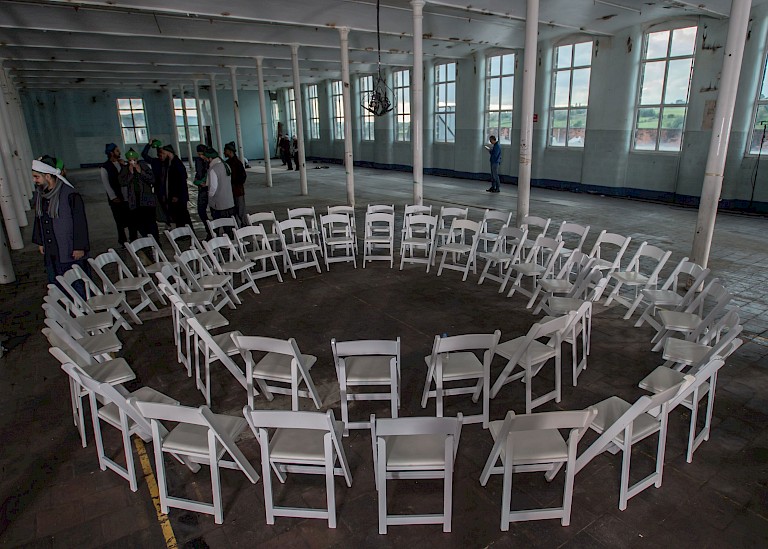 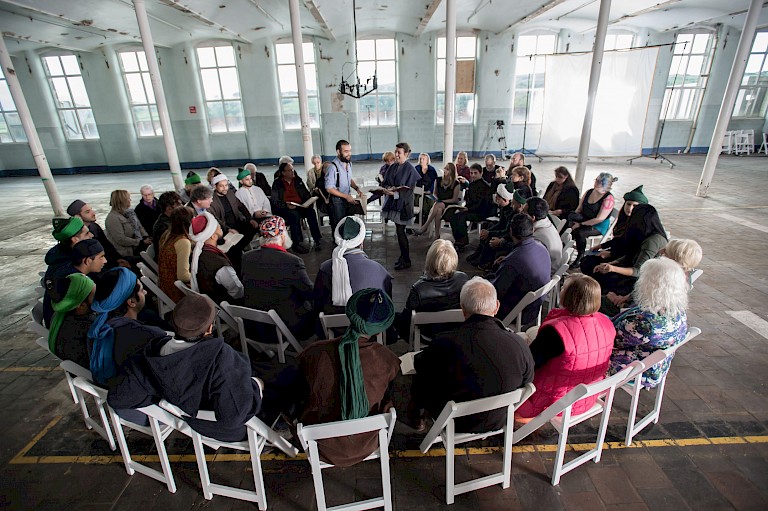 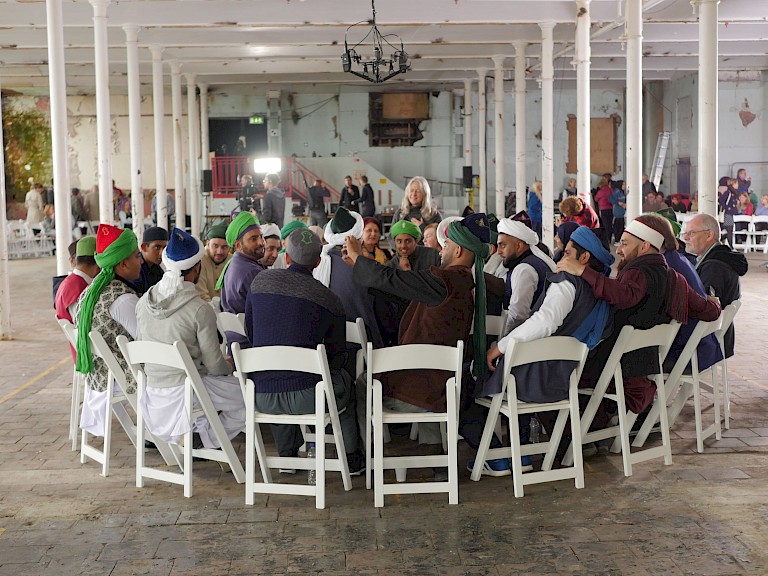 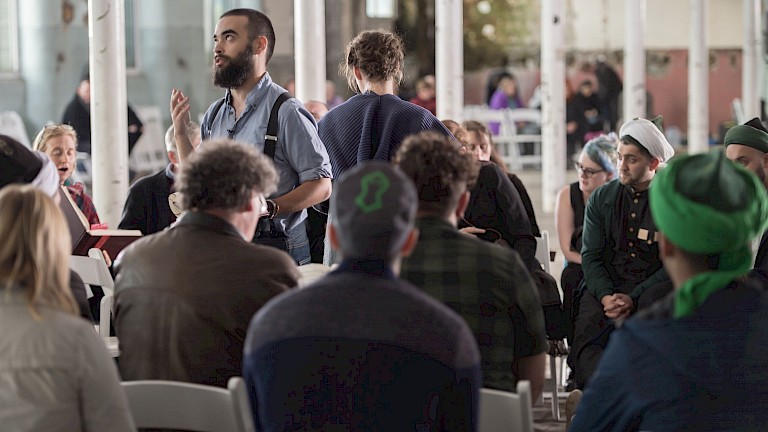 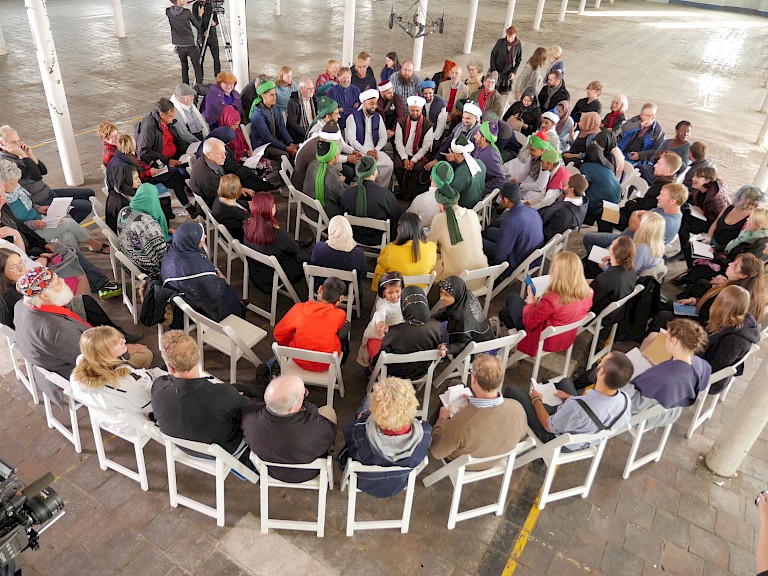 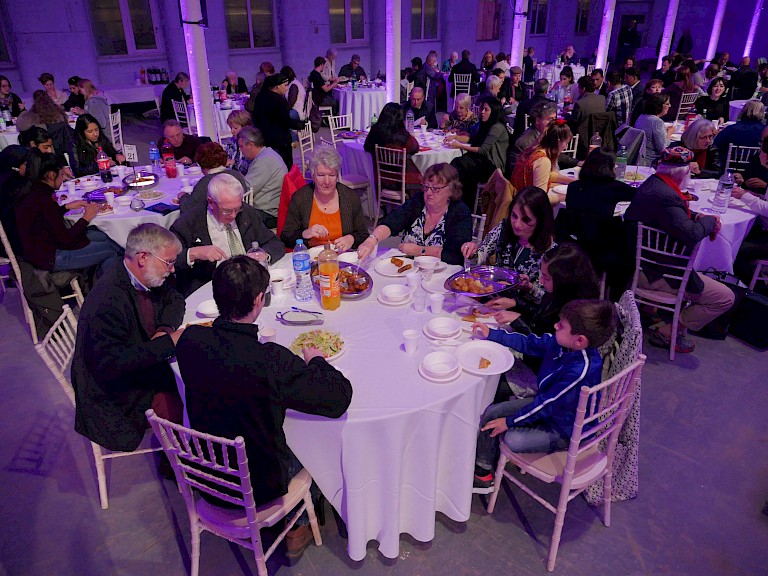