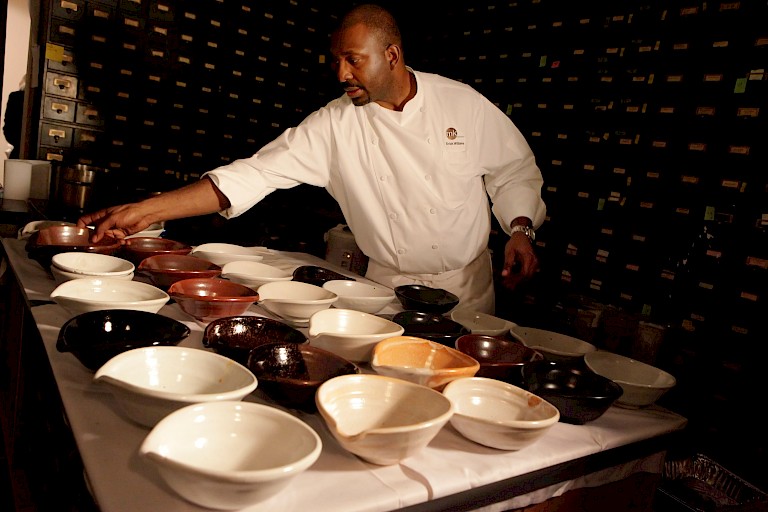 Soul Food Pavilion (2012) was a series of five meals held in public space by the American artist Theaster Gates. Gates is known for an extremely diverse practice at the intersection of urban planning, object-making and performance that creates thought provoking and complex interventions around space and culture. The project was created as part of public programme for the Smart Museum of Art, University of Chicago, exhibition Feast: Radical Hospitality in Contemporary Art, which explored the history of the artist-orchestrated meal. Gates collaborated with chef Michael Kornick and soul food expert Erika Dudley to create menus and host a series of ritualised dinners which took place at Gates’ celebrated Dorchester Projects in the Grand Crossing neighbourhood of Chicago’s South Side.[1] A diverse mix of guests joined Gates for each of the dinners, which combined meals served on specially commissioned ceramics created in collaboration with Japanese master potter Kouichi Ohara, performance, and discussions around a variety of themes. Each dinner had its own theme: The Geography of Soul, The Art of Soul, The History of Soul, The Politics of Soul, and The Community of Soul.

“Eating together is a basic element of human culture, but it wasn’t until the last few decades that artists began to experiment with the aesthetic potential of the shared meal itself and craft provocative, meal-based projects that foster critical engagement with the world around us.” commented Stephanie Smith, curator of Feast… about the exhibition. Soul Food Pavilion allowed the public to experience first-hand how a meal could be the catalyst for artistic expression and political discussion, drawing on the idiom of soul food as a way of exploring the race paradigm of the United States. Soul Food Pavilion gathered together artists, musicians, poets, activist pioneers of the African-American community, art patrons, and members of the public whose names were drawn from a pool. The dinners were a sensual feast - carefully selected foods created by top chefs and served on handmade ceramics were accompanied by performances by The Black Monks of Mississippi group. Performances took the form of semi-improvised sung ‘sermons’ that spoke of local issues and the struggles of transforming fixed mindsets.

Food and plants tell us much about a place and the people who consume them. The history of food tells stories of trade and migration—the spice trail, the tomato to Europe—and also of conquest, of human bodies packed into ships and unloaded in ports for the slave market. Colonialism and the oppression of people run deep in food and recipes, as the history of Soul Food with its roots in the slavery of the American South exemplifies. Many of the foods integral to soul food originate from the limited rations or scraps given to slaves by their masters and making do with whatever food was available. As slaves created dishes from available scraps, they utilised not only African crops that had been brought to the South, but also indigenous American crops. As former slaves left the South, soul food became a reminder of the home and family they had left behind after moving to unfamiliar northern cities. Soul food restaurants were Black-owned businesses that served as neighbourhood meeting places where people socialised and ate together. Soul food staples including cornbread, fried catfish, BBQ ribs, chitterlings, and various greens are now synonymous with cooking of the American South but speak of a dark history. By creating a ritualised meal around these foods and their history Theaster Gates located soul food back within black identity and within black history. “The history of foods in America for African Americans is really complicated story” Gates commented of the project. “The dinners give me a way to leverage ritual, to ask hard questions in ways that people don’t normally talk about in Chicago, with groups of people who don’t normally get together.”

Historically, people have used food as a unifier, a way to bring solace to each other and bridge the gaps between us. But in an era of social and political upheaval, Theaster Gates turned to food not only as a form of connection but as a form of resistance. Gates’ practice has often invoked the overlooked black experience, exploring forgotten or repressed cultural objects and practices. He has often spoken of his role as building a sense of the ‘poetic’, the ‘sacred’, and conjuring the ‘symbolic’ in everything he does. Each of the five Soul Food Pavilion events was described as a ‘ritualised dinner’ by Gates, who explained “Ritual becomes this tool that allows for people to feel safe, that gives us all an excuse to be more open, more transparent, more vulnerable than we might be normally.” Uniting diverse communities around shared passions—food and art— Gates built a space where hard conversations around race, politics, unequal privilege, community, and other topics could happen.

While Soul Food Pavilion opened up space to discuss and reflect on the African-American experience, what each meal also offered the diner was a platform to understand how space, power, and politics play out across the city of Chicago. Intentionally, the dinners took place in what is a politically charged part of the city of Chicago. Grand Crossing is a low socio-economic neighbourhood far across town from the Smart Museum, an area considered a food desert because of the scarcity of grocery stores. Bringing the art community and general public to this African-American neighbourhood, Theaster Gates ensured Soul Food Pavilion became a platform to discuss the cultural and political history of soul food and its class division, and what this represents in contemporary America. “Many 21st-century African-Americans have rejected soul food. It’s not a healthy choice, it represents an unpleasant history, and it’s ‘what we used to do,’” commented collaborator Erika Dudley, who grew up cooking soul food. “So, how do we keep these traditions alive and show why they are important to black identity?” One menu Dudley developed included watermelon, a fruit that throughout American history has been negatively associated with Black culture. “It goes back to images of jigaboos and pickaninnies—the little black children eating watermelon with seeds in their teeth. It is completely pejorative.” Dudley said, adding she knows many African Americans who won’t eat watermelon if front of white friends. “It’s not that I wanted to reclaim watermelon,” Dudley continues, “but I wanted to celebrate it.”

What is eaten, and with whom, are two of the oldest and most powerful tools for revolution. The notion of soul food as an African-American cuisine emerged in the 1960s and one of the first essays to appear on the subject was by African-American writer and cultural critic Amiri Baraka. His essay countered a racist claim by another writer that ‘Blacks had no cuisine’. Soul food remains politicised, despite its gentrification into the mainstream, and it is this inherent quality that Theaster Gates skilfully unravels throughout each ritualised dinner. Illuminating a complex web of political, economic, historical and racial factors, Soul Food Pavilion explored and made space for a critical yet sensuous foray into American food history and politics.

[1] Theaster Gates’ Rebuild Foundation has bought up condemned buildings in Grand Crossing, the deprived, predominantly African-American South Side district of his native Chicago. With the blessing of the city’s mayor, Rahm Emanuel, Gates has refurbished buildings and repurposed them as community facilities: workshops for artists, apartments, a library, a black cinema. 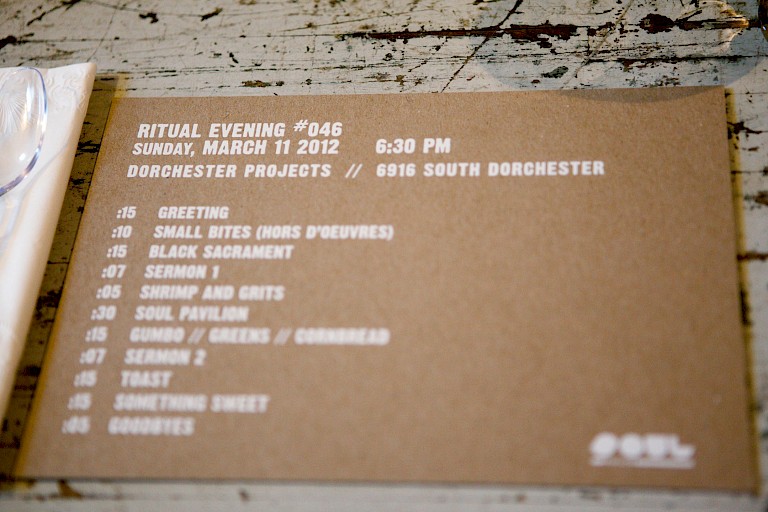 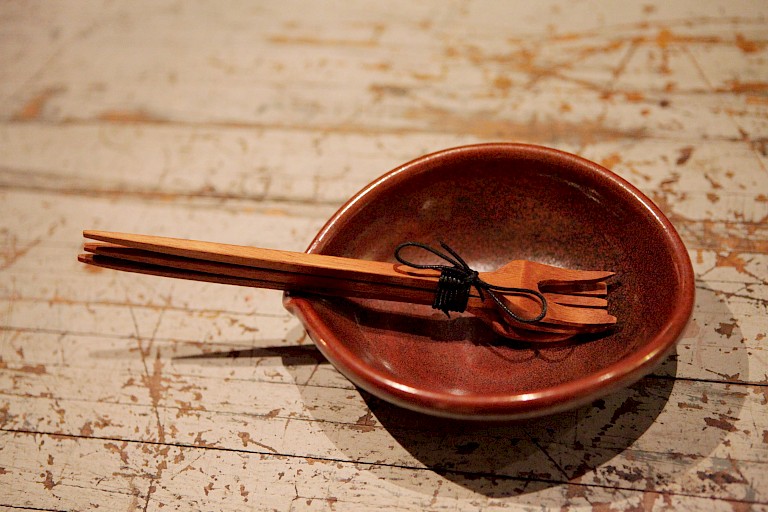 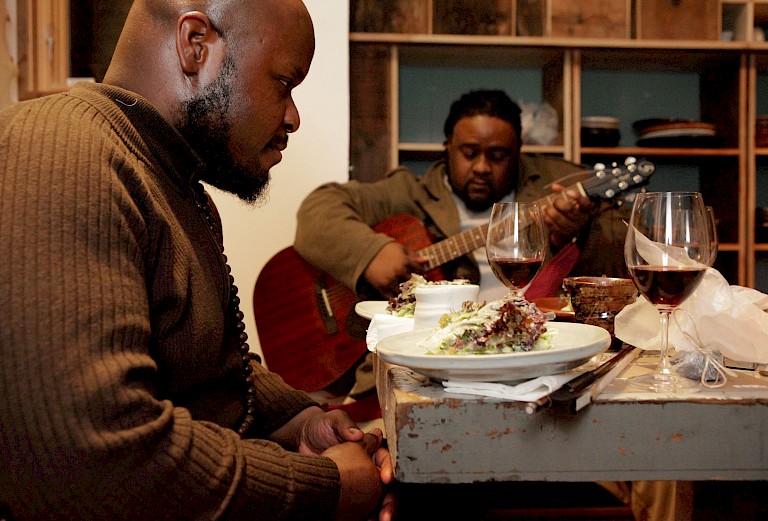 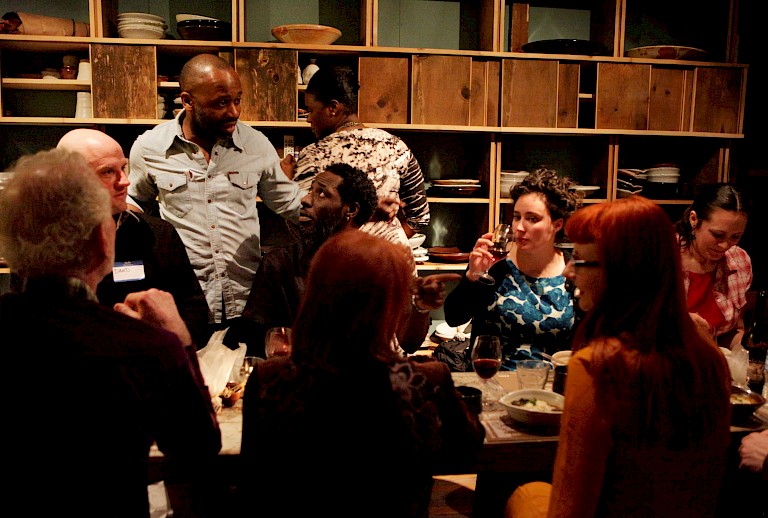 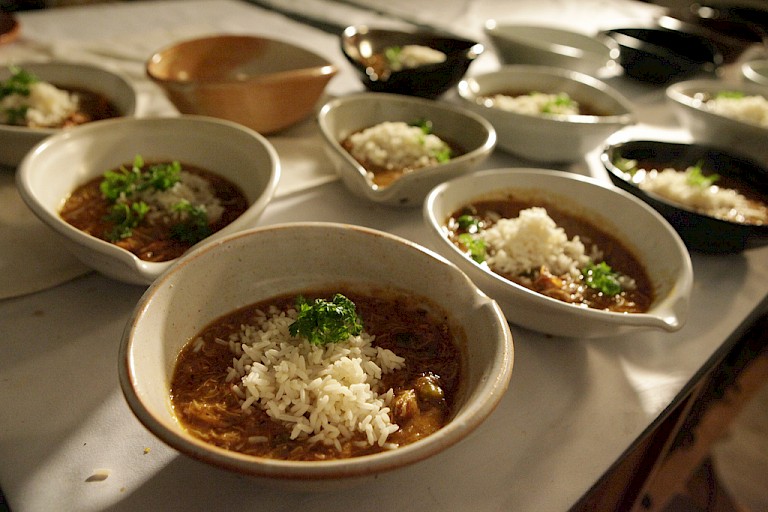 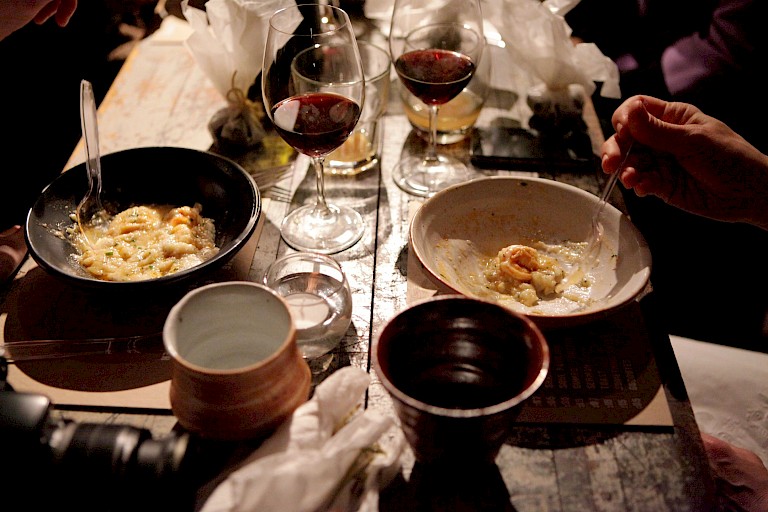 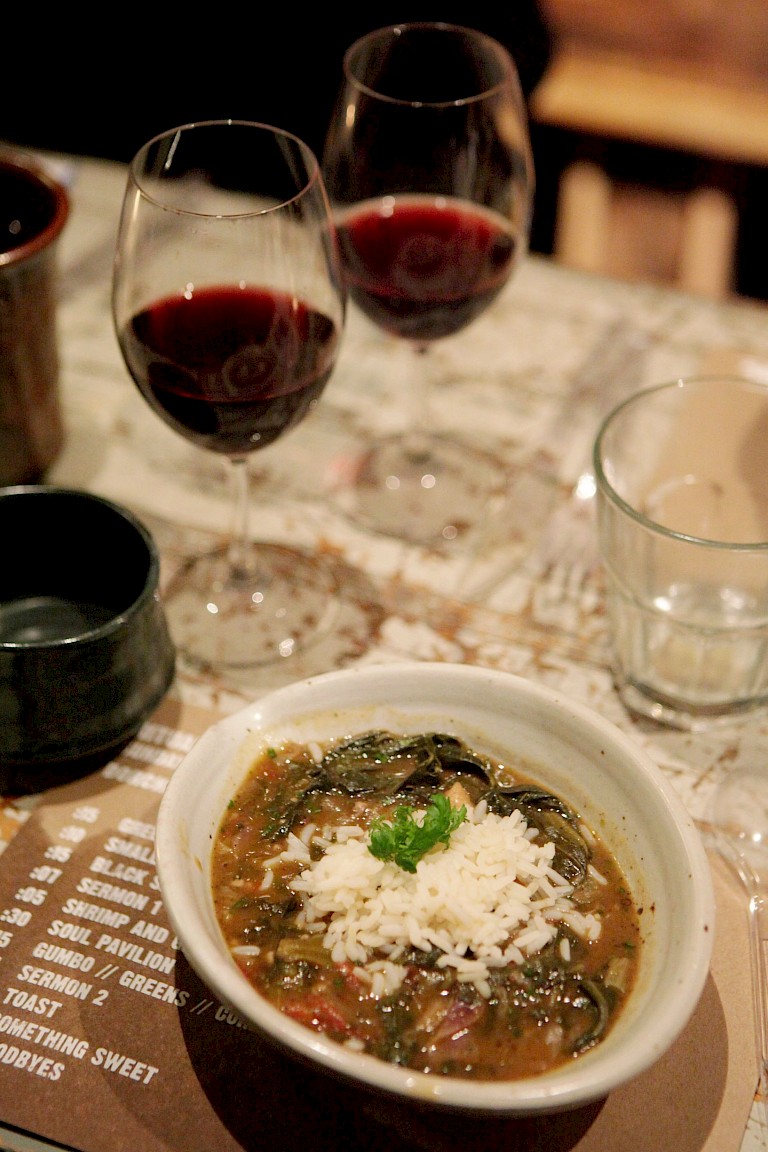