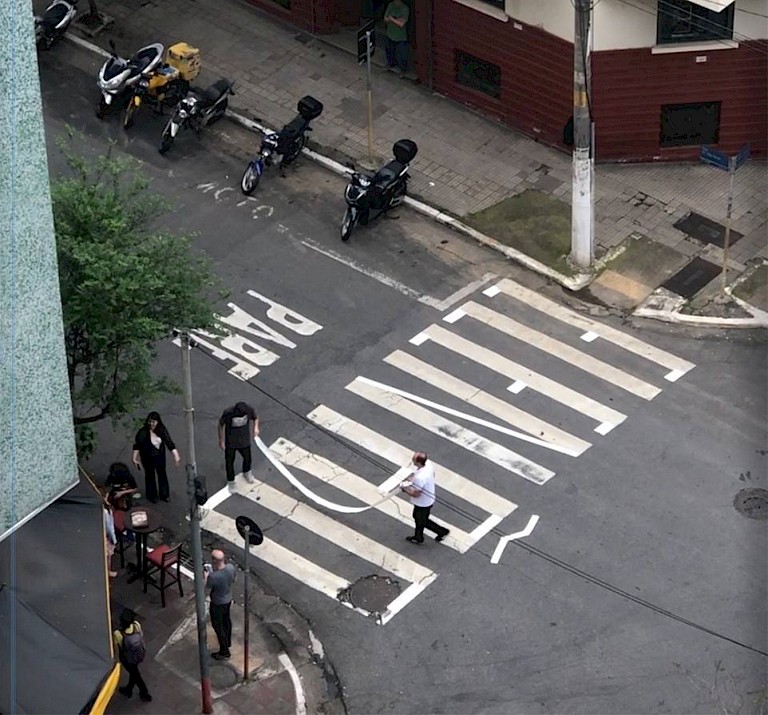 The office located in São Paulo, Nitsche Arquitetos, is led by brothers Lua Nitsche, Pedro Nitsche and João Nitsche. Divided into two fronts, the office develops both architectural projects created by Lua and Pedro, both architects, as well as graphic design and visual programming works, led by João, a visual artist.

Seeing architecture as the construction of habitable space, always in relationship with the human being, the Nitsche brothers look for qualities in the space that go beyond the program and its use, and their works show special attention to the way architecture is built and dialogues with reality.

To put it in context, in 1964, when the military regime was implanted in Brazil, written on the walls with the phrases “down with the dictatorship”, “down with repression” and later “direct now” spread throughout Brazilian capitals. These demonstrations took place in this period and, as the people's indignation advanced, ways of expressing this feeling took shape. In this case, the writings were made with pebbles, which were in asphalt construction sites. With this material, it was very difficult for the message to be erased from the wall, in addition to representing a spontaneous and marginal act. What later gave rise to what in Brazil is called pichação, which is taboo because it is considered a vulgar expression, degrading and inferior to other urban art.

It is important to emphasize that the term pichação is used only in Brazil. In other parts of the world, it is common to use the expression “illegal graffiti”.

More than an attack on public or private property, the pichação directly affronted government guidelines for censorship and social control, an illegal and subversive action condemned in the Brazilian penal code as an act aimed at “destroying, rendering unusable or deteriorating something that belongs to others”.

Pichação is a unit of the urban landscape that must be seen as a great mediator of this reality, even if not everything that the attentive passerby observes can be classified by him as communication since graffiti made by gangs uses a hermetic communication code.

The pichação in Sao Paulo has a characteristic of territorial appropriation that does not aim at territorial demarcation, that is, the place of residence and coexistence of the intervener is not necessarily occupied to delimit a control area of a certain group, as the graffiti pioneers in the USA did. The appropriations of space are made taking into account visibility criteria and information dispersion among peers.

This expression as a form of protest continues to be present in cities to this day, used by activists from increasingly diverse causes, such as issues related to the LGBTQIA+ community, civil rights, gender equality, social inequality, racial prejudice, among others. Having become popular throughout the national territory, the potential of pichação as a form of manifestation in urban areas is evident, which attracts even more practitioners, with different intentions.

The collective appropriates this language to develop the work “Grito da Rua”, which is a reverence to pichação as a language, spontaneity, manifestation and political act, but seeks its own aesthetics when performing a completely ephemeral work, with material that despite adhere to the support, it does not have much durability.

This title refers very well to what was happening at that time, as well as a way of expressing indignation at the political moment Brazil was facing (and would face even more of its consequences). 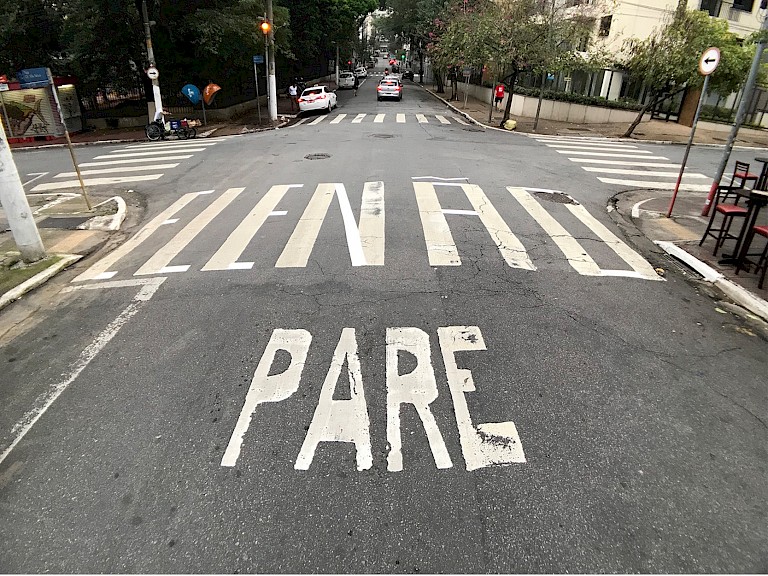 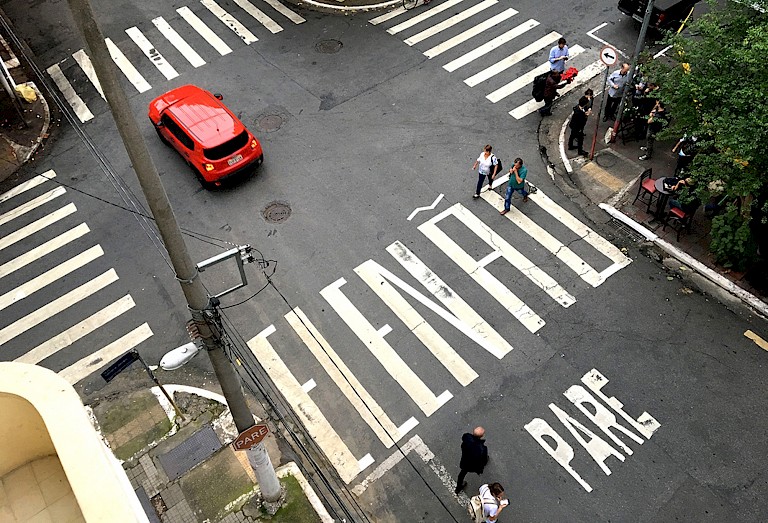 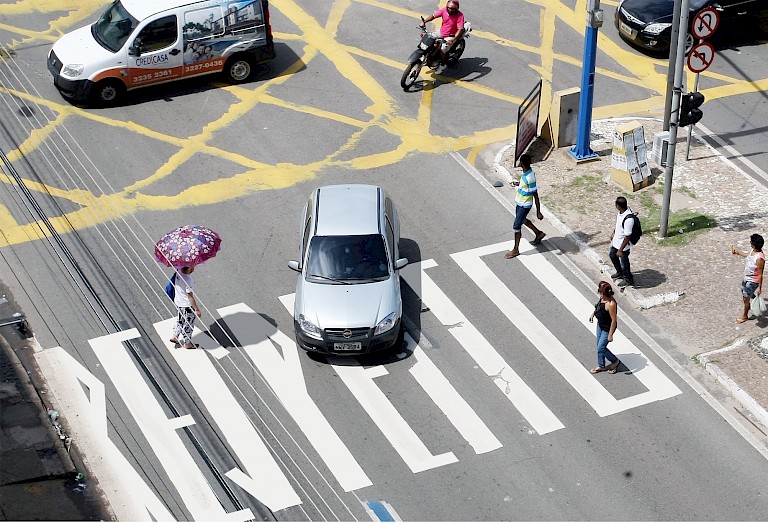 Regarding the motivation that led to this work. Since 2013, Brazil has been going through a major political crisis marked by intense protests and strong polarization. The April 2016 parliamentary coup, with the deposition of President Dilma, intensified this polarization even more, with a strong campaign by groups against and in favor of the president's departure. Also in recent years, an increase in groups and movements with conservative and right-wing agendas has gained prominence.

Brazil's presidential elections in 2018, in turn, were the first general elections after the coup that removed Dilma Rousseff from the Presidency of the Republic. In this polarized context, a dichotomy was created between two candidacies: that of former president Lula, imprisoned at the Federal Police Superintendence in Curitiba since April 2018, favored for the election, but whose candidacy was impeded by being convicted in the second instance and then-right-wing deputy Jair Bolsonaro (of the Social Liberal Party), popular in social media and known for controversial statements of machismo, racism and homophobia.

If, on the one hand, there was a strong anti-PT movement (PT is the party of former presidents Lula and Dilma), there was also a strong movement of rejection of Bolsonaro's candidacy, mainly by voters in favor of agendas related to gender, racial and gender policies. sexuality. It is important to emphasize here that women make up the majority of the Brazilian electorate: there are 77,337,918 voters, which corresponds to 52.5% of the total (TSE - Superior Electoral Court, 2018). Among all the presidential candidates, Jair Bolsonaro was the most rejected candidate among the female electorate. In the context of the #EleNão digital campaign, according to a survey by IBOPE (Brazilian Institute of Public Opinion and Statistics) released in 2018, 54% of women did not want Bolsonaro president.

In this sense, the #Ele Não movement arose from the organization of a group of women formed on Facebook, called “Women United Against Bolsonaro”, given the persistence of the candidate's leadership in the elections, with about 24-26% of voting intentions. Created on August 29, 2018, the group, in just under two weeks, on September 12, surpassed the record of 1 million users. The group suffered an attack that same week by supporters of Jair Bolsonaro. The administrators who created the group on social media had their access restricted (which was later recovered) and reported threats received by private messages via the Whatsapp app.

Finally, amidst the dispute and conflict that marked these elections, the women's groups that got involved sought to channel the mobilization on social media for a demonstration in the streets. As a result, September 29, 2018 was defined as the demonstration of "Women against Bolsonaro" and which resulted in one of the largest, if not the largest, demonstrations of women in the history of Brazil.

The work of this study directly reflects this whole paradox, reflecting on the streets all this manifestation online and offline, resonating with these manifestos its way of expressing and bringing to yet another medium, that of urban art, the indignation of this polarization and the consequences here.

The writings on the crosswalks are exactly the phrases said by the opposition to Bolsonaro's candidacy, which the protest against without mentioning his name is also related to not increasing engagement through algorithms, which does not distinguish the content of what is being said.

Even if the results were not favorable, the expressions contrary to the fact become fundamental for putting weight on this very contradictory story. And the “Grito da Rua” contributes to the understanding of a politically divided country.